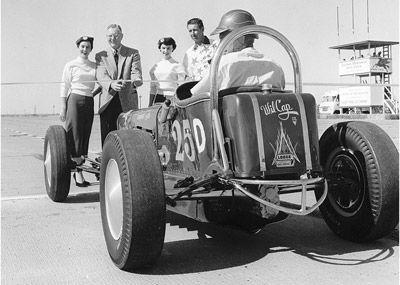 Art Chrisman, one of the founding fathers of NHRA Drag Racing and a member of one of the sport’s legendary families, died July 12. He was 86.  Many people will remember Art Chrisman rocketing down the track in his #25 car . His #25 car cemented its place in the history books as the first car to make a pass at the 1955 Nationals in Great Bend, Kan., NHRA’s first national event. Chrisman took part in the ribbon-cutting ceremony, then made the opening lap of the race as well as the first drag racer to exceed 140 mph & 180 mph. 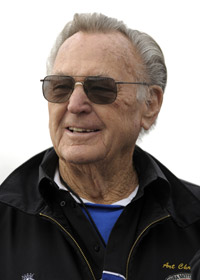 Racing was clearly in the family’s blood. Chrisman’s uncle, the late Jack Chrisman, won Top Eliminator titles at the first Winternationals and at the 1962 U.S. Nationals. In 1964, Jack was the first driver to wheel a blown and injected nitro-burning Funny Car. Jack’s son, Steve, was a competitive alcohol and nitro Funny Car racer in the 1980s.
Chrisman also was one of five charter members of the Bonneville 200-mph Club after driving Chet Herbert’s Beast streamliner past the double-century mark (and eventually up to 235 mph) in 1952. The next year, the Chrismans’ homebuilt coupe reached near-200-mph speeds.

Chrisman, who with his son, Mike, founded Chrisman Auto Rod Specialties to build and restore hot rods, restored Hustler I to 1962 vintage in the mid-1980s and made full quarter-mile smoking runs for the fans.

About Ralph Guerra 43 Articles
Ralph Guerra is the associate editor for RacingJunk.com. Ralph grew up in Southern California's car culture and quickly became infatuated with anything and everything V8. Whether it was a 63 Fairlane with a 289 or a Gt500 with a supercharged 5.4, if it was a V8 he wanted to drive it--fast.