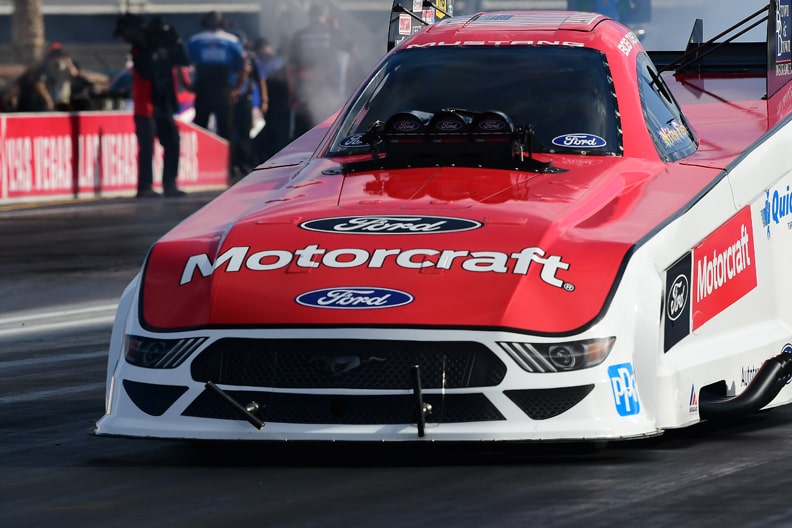 This week the NHRA’s Camping World Drag Racing Series is caravanning from North Carolina to Texas, in order to tackle the 34th Mopar Express Lane NHRA SpringNationals presented by Pennzoil, held at Houston Raceway Park. Racers will revert to two-lane racing once again, as the pair of 4-wide contests are complete for the year, having missed the 2020 season due to the pandemic.

This is good news for racers in NHRA’s Top Fuel category, as it represents an opportunity to put a halt to Steve Torrence’s domination again this year, at least in four-wide racing. The Texan has won six of the last seven four-wide competitions, including both races this year. He’s been a pinch less successful in traditional straight-line competition (granted, there have only been two of each type), with Josh Hart winning one and Torrence’s good friend Antron Brown taking the other two-by races contested to date.

While originally scheduled for three days, with a single Friday qualifying session and two on Saturday, deluges of rain have caused Raceway Park and the surrounding area to need clearance before racing ensues. This means that Lucas Oil Super Stock, Stock, Super Comp and Super Gas, all slated to compete this weekend will have to be rescheduled. The track wants the extra time to properly prepare the track, pit areas and spectator parking to accommodate expected racers and fans.

It’s one thing to qualify well and quite another to win races, as Brittany Force has discovered. Despite being winless in the four contests this year, she’s still only 134 points out of first place in Top Fuel, thanks to her 21st and 22nd No. 1 qualifying credentials, trailing only Steve Torrence and Antron Brown (-76), who is ramping up plans to take his Matco Tools dragster under his own wing next season. Shawn Langdon (-160) and Hart (-163) make up the balance of Top Fuel’s top five, with Billy Torrence, Doug Kalitta, Justin Ashley, Leah Pruett and Clay Millican completing the top 10. Let it not be forgotten that Brittany Force won the last two races held in Houston (2018, 2019).

When John Force earned his 152nd Funny Car victory at last weekend’s NGK NTK NHRA Four-Wide Nationals after qualifying No. 1 for the 161st time, it amplified Force’s 2021 chances to take a 17th NHRA Funny Car championship in his Chevrolet Camaro SS. Force has been on his game since the season began and comes to a track where he’s had extraordinary success, earning a record seven Flopper wins in south Texas. Force is a scant 31 points behind two-race winner Bob Tasca III and his Ford Mustang, as well as J.R. Todd’s Toyota Camry, which is just 17 points behind Tasca. Reigning titleholder Matt Hagan holds fourth-place points (-101) while Hagan’s fellow Dodge Charger SRT Hellcat Don Schumacher Racing teammate Ron Capps is fifth, 125 behind Tasca.

This meeting is a Dodge-sponsored race and both Hagan and Capps are on a mission to make sure one of their Hellcats is in the winner’s circle come Sunday. The track, known for its cooler air and hot speeds, amplifies the hopes of those in the Dodge contingent, which also includes two-time champ Cruz Pedregon, working with new crew chief John Collins, who had been with Tommy Johnson Jr.’s team for several years. Collins knows how to make a Dodge work and Pedregon is driving quite well, holding eighth-place points. Still, Alexis DeJoria in sixth (Toyota Camry), 7th place Tim Wilkerson (Mustang), Robert Hight in ninth (Camaro SS) and Blake Alexander (Mustang) are primed to make the Dodge contingent squirm.

It’s always great to see new winners in any class, and having Dallas Glenn earn Pro Stock honors at Charlotte was, well, another feel-good story. With preparation from KB Racing, Glenn has access to all the right stuff that’s propelled four-time titleholder Greg Anderson to the top of the scoring pylon. Anderson has the points lead in this class, followed by fellow four-time champ Erica Enders, second-generation racer Mason McGaha, Deric Kramer and another second-gen racer, Aaron Stanfield in the door slammer top five.

The balance of the top 10 include third-generation racer Troy Coughlin Jr., Glenn, Kyle Koretsky, Matt Hartford and Chris McGaha. All of the top Pro Stock racers are using Chevrolet Camaro machinery, while there’s a good group of Mustang racers (mostly named Cuadra) and a few Dodge Darts in the mix. Glenn, who is in his rookie year, is still excited by his four-wide victory in Charlotte, where he beat Mason McGaha (in his second final quad this year) and Troy Coughlin, who advanced to his third career final round. “This is a whole new perspective for me,” Glenn said after his win. “These cars are so much fun, but they’re hard to drive. The results just came a little sooner than we were expecting.”

Pro Stock Motorcycle is not competing this weekend but will be back after a long pause, during the Summit Racing Equipment NHRA Nationals at Norwalk, Ohio, to be held June 24-27.

Car counts this weekend are a bit light for Top Fuel with 15 entries, a full complement of 16 Funny Cars and a whopping 21 Pro Stock cars, including returning Rodger Brogdon and Australian Shane Tucker, along with broadcast veteran and part-timer Bruno Massel Jr. The weather isn’t looking great for this race, even with the two-day schedule, as forecasts are for Friday’s overnight showers and thunderstorms, thunderstorms on Saturday and isolated t-storms on Sunday. Temps should be high 70s to low 80s and, since there isn’t a race next weekend, teams might be forced to stick around and race early next week if the weekend washes out.