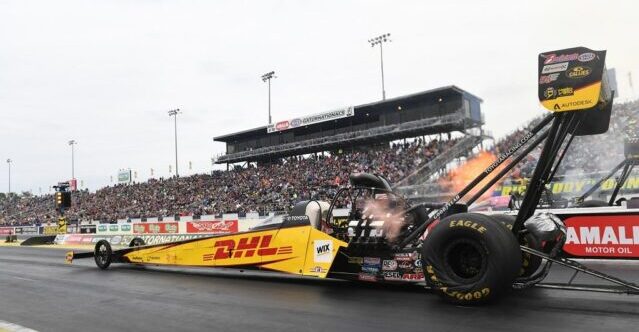 Rather, an accident that occurred late Sunday night has taken the joy out of Steve Torrence, Ron Capps, Jeg Coughlin Jr. and Angelle Sampey’s victories in the third “return to racing” competition at the track outside Indianapolis, site of next month’s DENSO Spark Plugs U.S. Nationals.

While the details aren’t known completely, Dom Lagana, 34, Top Fuel competitor and mechanic on the CAPCO Contractors dragster of Billy Torrence, was driving Richie Crampton’s 1957 Chevrolet wagon, known as the “Sh*tbox of Doom” southbound on County Road 1000E when he lost control and struck a utility pole.

Top Fuel race winner Crampton and fellow CAPCO Contractors mechanic Jacob Sanders, 30, were passengers in the Chevy, which had been used as Jonnie Lindberg’s Top Alcohol Funny Car tow vehicle this past weekend.

The ’57 Chevy did not have seat belts. Although unconfirmed, sources say Crampton was ejected and suffered a broken hip. Lagana is currently on a ventilator and is listed in critical condition. Sanders’ condition is unknown at this time. Crampton, 40, had been scheduled to drive Lindberg’s Funny Car at the U.S. Nationals next month.

Steve Torrence, reigning Top Fuel champion and winner of this past weekend’s race, posted to social media on Monday afternoon: “We are asking everyone to please pray for my brother Dom Laguna. He and two others were in an awful car accident last night and is currently in critical condition. Please pray for healing as well as peace and comfort for our family.”