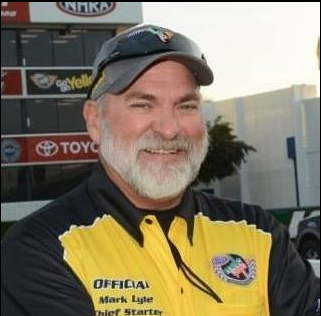 The popular chief starter for the National Hot Rod Association, Mark Lyle passed away on Sunday, March 27, while vacationing between racing events with family and friends.

Lyle, a resident of North Bend, Washington, was only the third official starter in the history of the sport succeeding Rick Stewart starting with the 2012 NHRA Mello Yello season and following in the footsteps of Buster Couch, who controlled the starting line for the 41 previous years.

Before his advancement full-time on the NHRA professional tour, he became official starter at Pacific Raceways in nearby Seattle in 2000 and then later promoted as the official starter of the entire NHRA Division 6 series in 2005.  He was a certified team member of NHRA’s Safety Safari supervising all starting line procedures from every NHRA division from Stock to Top Fuel.  He is survived by his wife of 36 years, Marcia.