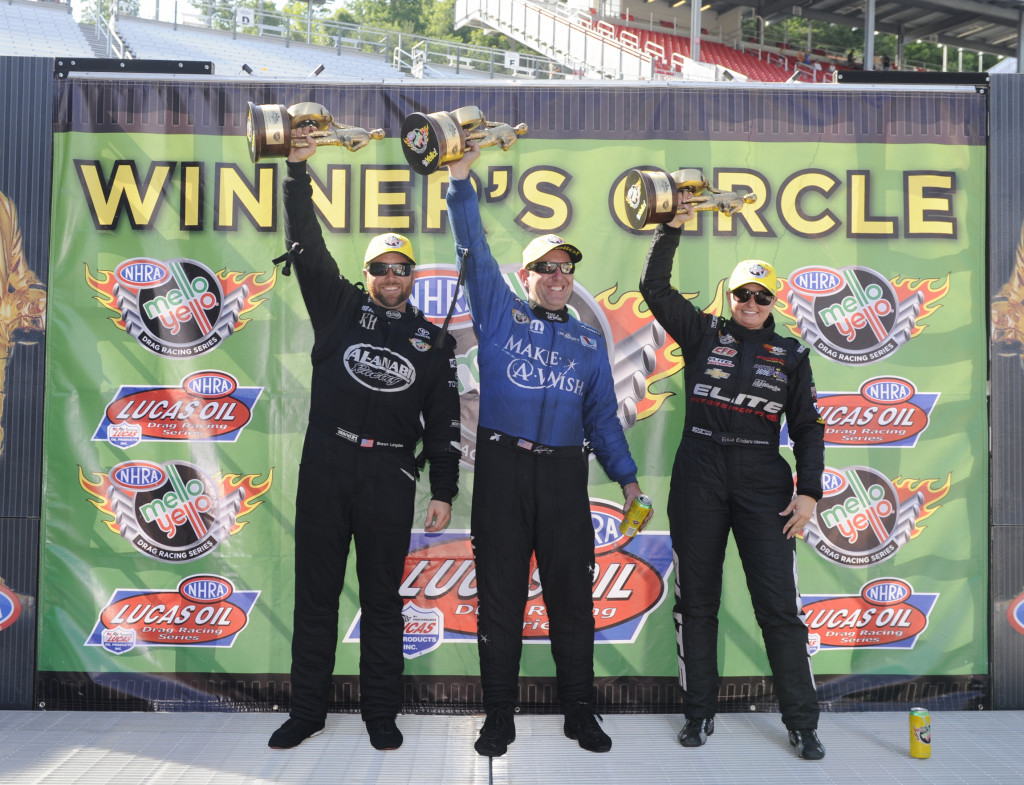 Tommy Johnson, Jr., Shawn Langdon, and Erica Enders-Stevens were all thankful for the full support of their dads on this Father’s Day Sunday at the Bristol Dragway. Each personally got to thank him with a Wally at the Ford Thunder Valley NHRA Nationals.

Tommy Johnson, Jr. isn’t a stranger to the winner’s circle on Father’s Day, celebrating with his Dad in  in Columbus in 1988 and then again in Englishtown in 2007.  What he didn’t know at that time was that it would take him seven years and a highly unusual path to return to the top of his game.

“I woke up this morning thinking, well it’s Father’s Day, and I seem to do pretty well on Father’s Day,” said Johnson, who has returned to racing full-time this year after being off the racing circuit since 2008.

Since that time Johnson has worked for Don Schumacher Racing as parts manager and track whisperer, and corresponding for ESPN as a pit reporter.  This kept his name and face out there, securing him the Johnny Gray ride when his sister, Terry Chandler, opted to fund the fourth DSR Dodge Charger R/T Funny Car team at DSR. It was her choice to hire Johnson to drive for her.

“Our Make-A-Wish Dodge Charger was just a really good car all weekend,” said Johnson, who qualified No. 5.  “The guys did a great job, and I felt good coming into today.  Knowing that it was Father’s Day did give me some confidence, and as a driver, that’s always a good thing.  I thought, well I’ve done this before – why not again?”

The win was the 10th of Johnson’s career in a nitro category. It marked the 226th win for the Don Schumacher Racing organization and the team’s 200th nitro category win.  In addition, it was the first Funny Car victory of the season for DSR.

“It’s not that we haven’t been competitive, we just haven’t been able to put it all together on Sunday,” said Johnson, who had raced to the semifinals twice this season but had yet to make the final round.  “We’ve qualified great but just couldn’t get it to go right on raceday.  I’m thrilled we were able to get it done today.  I didn’t want to get to the final and get a runner-up and still not have a DSR Funny Car win.  I wanted to prove that we’re not in a slump; it’s just tough out here.  We just needed to step it up a little bit.”

On Sunday, Johnson and his Make-A-Wish Dodge got the better of Cruz Pedregon in the first round, 4.147 seconds to 4.613, and then blasted past a tire-smoking Robert Hight in round two for a time of 4.175 seconds to 6.00 win.  Unfortunately for DSR, that made for a TJ versus teammate Matt Hagan semifinal.

“The car was working perfect today,” grinned Johnson.  “It was running great, and the guys did a great job. They turned that thing around every lap, and man they have put in so many extra hours lately at the shop – I’m just thrilled that the work paid off.

“Our car has been right there for awhile now, and maybe it’s the heat and coming into the hot conditions of the summer that played into our hands.  I’m looking forward to the next three months.”

Runner up Tim Wilkerson fought problems all day and thanked his crew for their dedication.  It was Wilk’s first final since Houston last year.

“We were fighting some ignition issues a little bit all day, and when we warmed it up for the final it was clear we had a problem,” Wilkerson said. “We started it up a couple of times and finally just ran out of time and had to go up there.  We saw something when we got to the line, and made an adjustment there, but it still went out there and dropped not one, but two, cylinders at once on the left side.  The car will make a move when you drop one hole, but dropping two practically makes it take a left turn, and it was either lift or hit the wall.”

The win enabled Johnson to jump four spots to third in the Mello Yello standings.  Despite a second round loss to Johnson’s DSR Dodge, Robert Hight is still the runaway leader with 265-point leader over John Force.

Another 2014 first time winner is the defending Top Fuel champion, Shawn Langdon, who eradicated his streak of losses since capping off his 2013 championship season at the Finals at Pomona and finally found his way back to victory lane in the Tennessee hills.

“The first year I came on board with the Al-Anabi team, it took us until the latter part of the year to get that first victory,” said Langdon.  “With stiff competition in Top Fuel, one thing you have to learn is patience, and you can’t take anything for granted.  Having a great season like we had last year, obviously we took a lot of pride in that.  We knew it would be tough.  We weren’t expecting it to take this long to get our first victory, but we’re still learning and trying to improve this Al-Anabi car.  Fortunately we got the win.  We wanted to punch our way into that Traxxas Shootout; we didn’t want to miss out on that, but more importantly, we wanted to keep earning those Mello Yello points.”

Langdon, who qualified No. 7 for the event, defeated teammate Khalid alBalooshi, Terry McMillen and Bob Vandergriff Jr. en route to his third final round appearance of the season.

“I’d still love this track whether I’d won or lost,” smiled Langdon.  “This is my favorite track on the tour.  I’ve done a lot of bracket racing at this place, raced a lot of sportsman races here.  It’s a track I’ve always loved coming to but just couldn’t get it done.  It definitely feels good to get it done today on Father’s Day, and it’s a special feeling.”

The Al-Anabi silver team struggled with the heat and humidity and had to make changes in their tune up to match up with the constantly changing conditions.

“The day started off with a little oversight on my part,” said crew chief, Brian Husen.  “That set the stage for everything and then we had to play catch-up.  It took a little while to get it right, but we finally got it.”

After two final round appearances already this year, Langdon didn’t want to take any chances of seeing his chances evaporate again on raceday.

“I was a little worried about pedaling in the final going up against the Kalitta group,” Langdon said.  “They are definitely the hottest car in the circuit.  That’s why it is great to be a part of the Alan Johnson and Al-Anabi Racing.  You feel like you have a pretty good race car too.”

“The car was working perfect today.  Our car has been right there for awhile now, and maybe it’s the heat and coming into the hot conditions of the summer that played into our hands.  I’m looking forward to the next three months.”

Doug Kalitta leads Antron Brown by 120 points and Langdon is in third behind by 151 points after 10 races.

After leaving the final round of eliminations at Bristol Dragway three of the last four years winless, Elite Motorsports Pro Stock driver Erica Enders-Stevens sealed the deal Sunday by scoring her third win of the season and the 101st Wally for a woman at the Ford NHRA Thunder Valley Nationals.

Capturing the ninth win of her career wasn’t an easy feat, going up against two Pro Stock champions in final eliminations.  With a round-one victory over Larry Morgan, followed by red-lights from both Greg Anderson and Jeg Coughlin Jr., Enders-Stevens found herself paired up against Jonathan Gray in the final, but when Gray got a bad start off the line, Enders-Stevens motored her Chevy Camaro to the win with a 6.698-second pass at 207.15 mph.

“Bristol has always been really good to me,” Enders-Stevens said.  “I’ve been to three finals in the last four years here and hadn’t been able to get it done until today.  As a driver, sometimes you’d rather be lucky than good, and today was one of those days for us.  Jeg should have beaten us on paper.  Fortunately for us, he went red and we were able to move on to the final.

“I’m really excited about the win but it’s definitely my team’s trophy.  They’re the ones that gave me the race car that went A to B when it mattered.  We were consistent and performed like a team and I couldn’t be more proud of them.  I’ve struggled the last month, but it means a lot to me that they’re so encouraging and never waiver.  Winning on Father’s Day is just an added bonus.”

To top it all off, with her win in Bristol, Enders-Stevens has extended her championship points lead once again, but this time over Coughlin, who assumed the second spot from his teammate Allen Johnson (908-753).

“It’s pretty cool even though it’s unchartered territory for me,” Enders-Stevens said.  “I’ve never been in this position, so it’s going to be something that I’m going to have to learn how to handle, but with a team like I’ve got, I know we’re going to be just fine.”

Enders-Stevens will look to make it two wins in a row when the NHRA Mello Yello Drag Racing Series makes its next stop for the Auto-Plus NHRA New England Nationals, June 19-22, at New England Dragway in Epping, New Hampshire