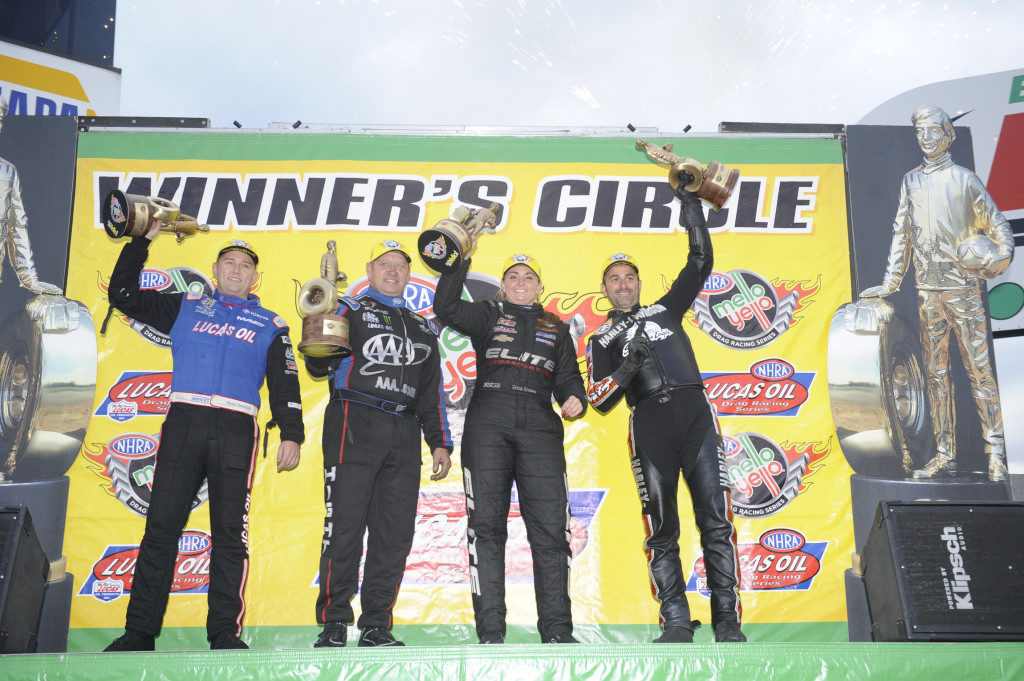 The start of the Lucas Oil Nationals may have been delayed three hours by rain showers, but the wait was worth it.  The mid 50-degree weather that invaded the Brainerd International Raceway on Sunday gave nitro racers an opening seldom seen in the sport leading to new mind-blowing National records in both Elapsed Time and Speed for the fuel categories.

The 3.60-barrier was shattered by Antron Brown, running a time of 3.680 seconds while his Don Schumacher Racing teammate Spencer Massey upped the mile per hour mark to 332.75 for Top Fuel.  Shawn Langdon went quicker at 3.662 seconds in the second round, but wasn’t able to back it up in eliminations allowing Brown, who did, to hold the National title.

Funny Car had a driver’s game going, lowering the grade over and over again with Jack Beckman finally taking the 20 bonus points for his National record-setting pace of 3.901 seconds, but it was Matt Hagan who broke through the 3.80-zone, hurtling to the quickest Funny Car time ever of 3.879 seconds for a new National Speed record of 329.58 mph, but didn’t back up his time to the required one per cent the NHRA issues to establish a new National record.

Despite all these record shattering marks, none of those drivers won.  It was Richie Crampton, taking down Brittany Force in Top Fuel and Robert Hight returning to victory lane for the first time in 2015 defeating Tommy Johnson, Jr. in Funny Car who took home the Wallys. 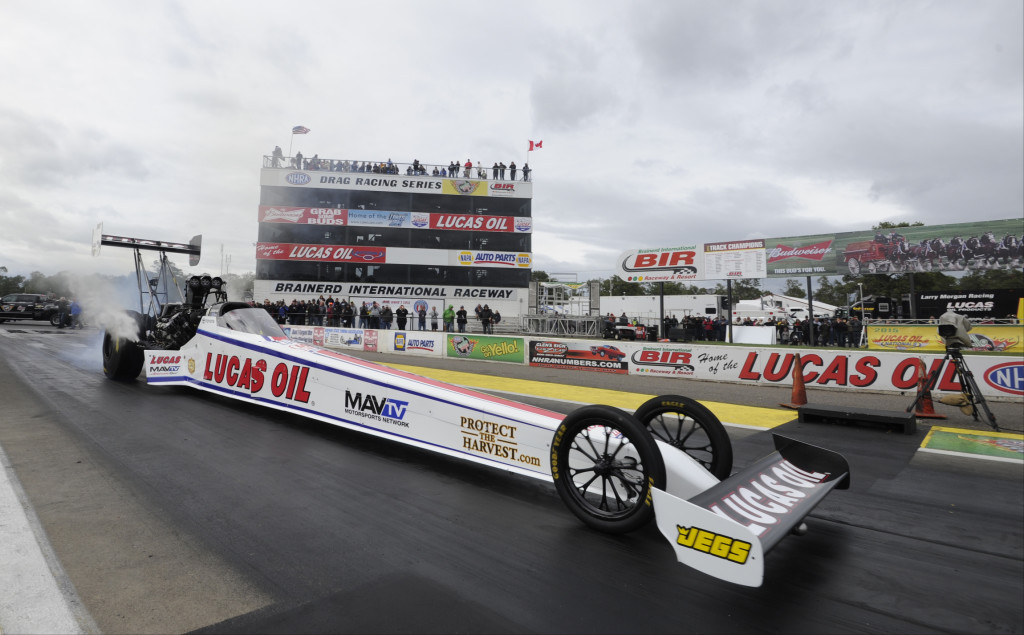 Crampton won for the fourth time this season and ran his record to a perfect 6-0 in career two-wide final rounds by knocking off Brittany Force in the final round of the Lucas Oil NHRA Nationals.

“For a Lucas Oil car like ours to win the Lucas Oil Nationals, that means a huge amount to Forrest and Charlotte (Lucas) and our entire MLR team,” Crampton said.

“We did have a rough start to the day,” Crampton said.  “We were a little lucky to get by. It wasn’t really until the third round that we started hitting our stride.”

Crampton knocked off boss and teammate Morgan Lucas in the first round, and then beat Larry Dixon in the quarterfinals.  The Australian then took down the quickest car in the land, beating Shawn Langdon before encountering Brittany Force for the win. 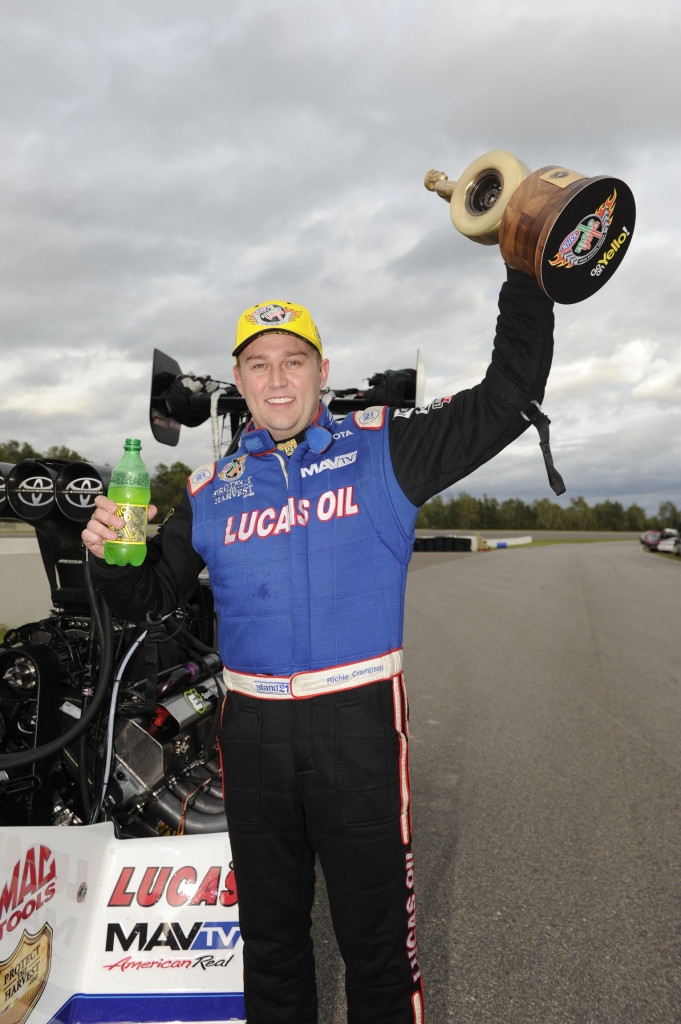 “To run a 3.69 in the final was the icing on the cake, for sure,” Crampton said, now showing six wins in his young career.  “I couldn’t be happier to work for such a great organization and to have such a great crew chief in Aaron Brooks and such a great crew that I have. They’re the best crew out here, and I’ve been working with them for a long time, so this means a lot to all of us.” 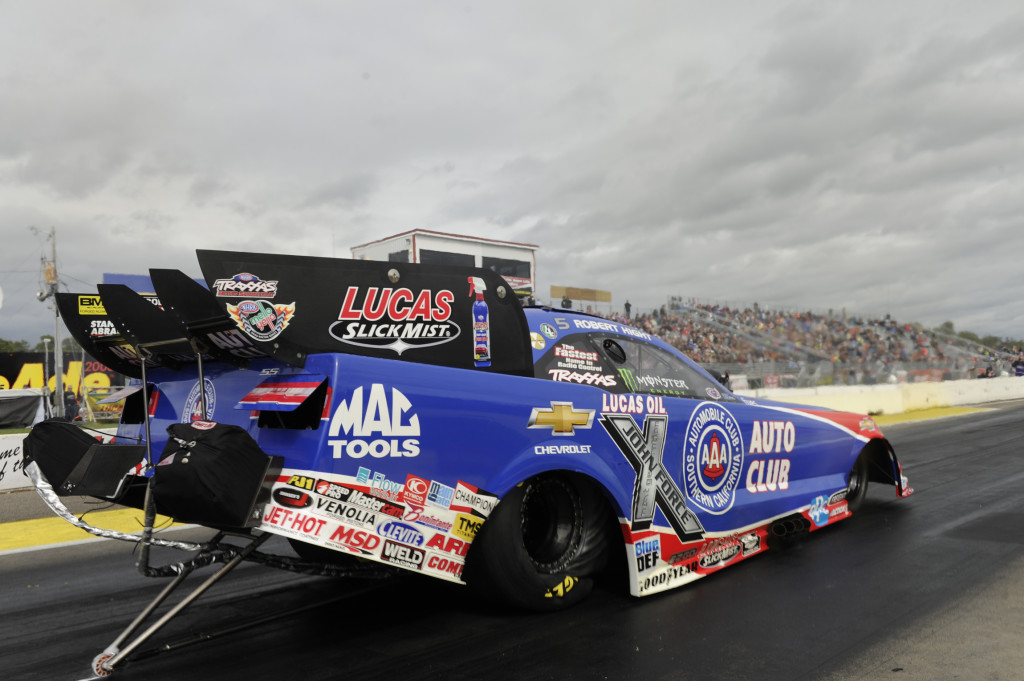 When it came to crunch time, Robert Hight had to work his way through a tough trio of drivers to reach his 54th career final round against Tommy Johnson Jr.  From the second round to the winner’s circle, Hight drove his Chevy Funny Car quicker and faster than he had in his career and he got the win with a solid 3.956 seconds in front of Johnson Jr’s 4.130 second run.

“We had a really good Chevrolet Camaro,” said Hight after picking up his first win at Brainerd in eleven tries.  “It was running good and we were running a little quicker than Tommy Johnson Jr.  I felt good but when you have these kinds of conditions you just never know what you are going to get.  We changed a bunch of things on the car and it was carrying the front end.  The DSR cars have been dominant and really good.  I would say we closed the gap this weekend but we have a lot of work to do.”

The win was Hight’s first of 2015 in his second final round appearance and it came on the final day he could clinch a guaranteed spot in the lucrative Traxxas Nitro Shootout.  Hight will join teammate John Force as the second Chevrolet Funny Car driver in the current seven car field.  The eighth spot is open to a fan vote and lottery selection.

“Brainerd has been a horrible race for me; the worst one on tour.  To finally get a win here will give me a little confidence coming back here next year.  We got in the Traxxas Shootout with that win which is big,” said the 35-time tour winner.

Hight moved into a three-way tie for fourth all-time in Funny Car wins with Don Prudhomme and Cruz Pedregon.  The win was also the 240th Funny Car win for John Force Racing.

Hight drove around a tough Ron Capps, first round, Brian Stewart in round two, beating Tim Wilkerson in the semi-finals. 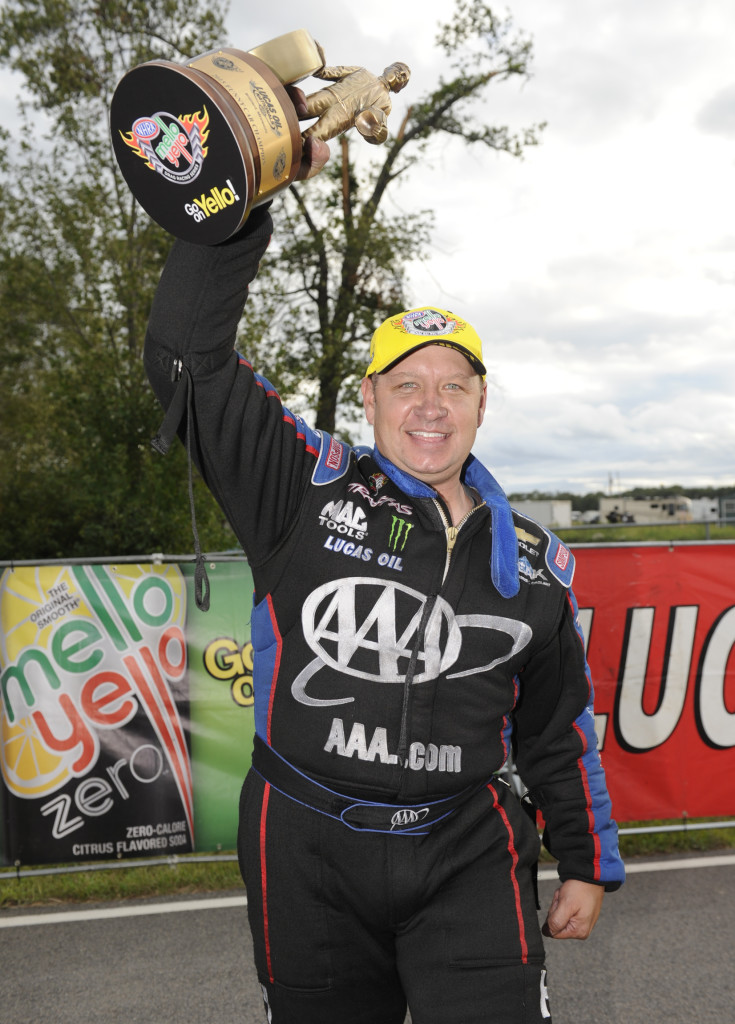 Hight moved up in the Mello Yello point standings to a solid 8th place and the 2009 Funny Car champion is only seven points out of 7th place.  Most importantly, Hight is 152 points away from the 11th spot heading into the final regular season race at Indy. 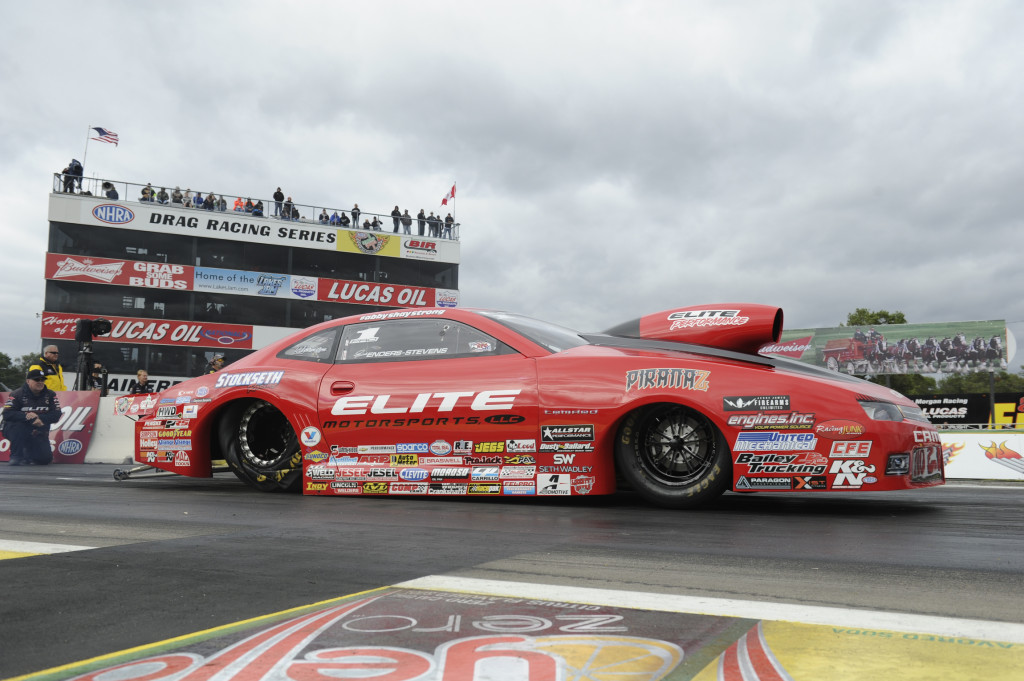 Erica Enders-Stevens moved back into the series points lead in Pro Stock by claiming her fifth victory of the season and 17th of her career.  She used a quicker reaction time and a final round performance of 6.552 at 210.34 in her Chevy Camaro to take the win over rival Jason Line, who posted a quicker, but losing 6.541 at 211.06 in his Chevrolet.

She outran Mark Hogan, Bo Butner and a red-hot Chris McGaha, who had won the last two races, advancing to the final round. She now holds a 16-point lead over four-time world champ Greg Anderson heading into the final race of the regular season. 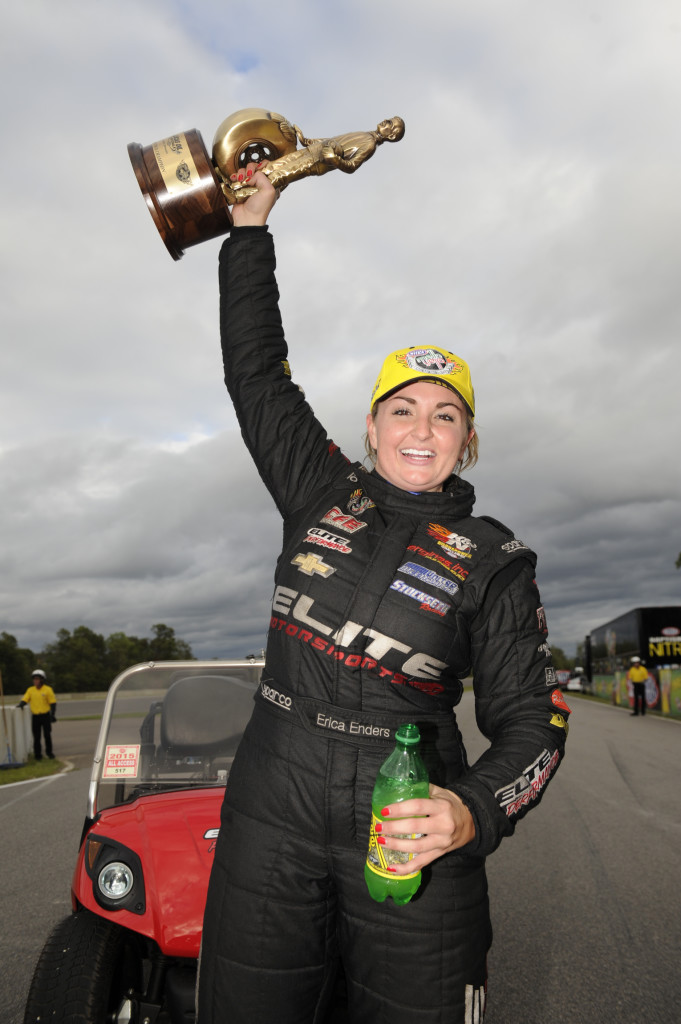 “This is a really crucial time in our season, especially heading into Indy (in two weeks), where it’s worth points and a half, so it’s a great time to get that momentum to swing back to our side of the fence, and I’m so proud of my team,” Enders said.  “It’s an amazing win for my group.  It’s really exciting for me because it’s hard not to get frustrated collectively as a group when things aren’t going your way, but that’s what makes our team work so great.  We don’t allow ourselves to get down in the dumps and just dig deep and play with all our heart.” 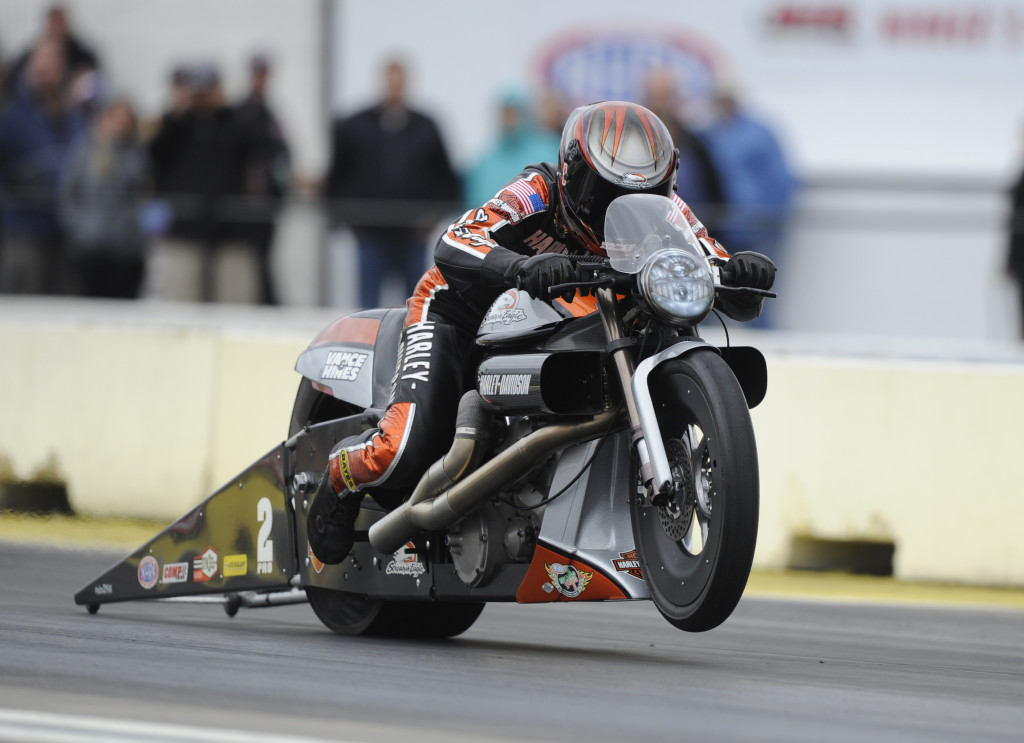 In Pro Stock Motorcycle, Krawiec took his third consecutive victory of the season by racing past teammate Andrew Hines in an all-Screamin’ Eagle Vance & Hines Harley-Davidson final round.  Krawiec finished in 6.844 at 194.30 to take his 30th career victory and second at BIR, while Hines clocked a 6.894 at 190.06 in the runner-up effort.

“I have a great motorcycle under me,” said Krawiec, who beat a murderer’s row of past world champions in Hector Arana, LE Tonglet and Matt Smith to advance to the final round.

“We’ve just lacked consistency,” Krawiec continued.  “I’d say since Denver we’ve really gotten into the groove and figured out what the motorcycle wanted.  I’ve been fortunate enough to go to three final rounds and win all three and also win the NHRA Pro Bike Battle in Sonoma, so I’m on a pretty good roll.  Hopefully it’s not too early because after Indy is when you really want to get on a roll like this, but hopefully I can continue it all the way through to the end of Pomona.” 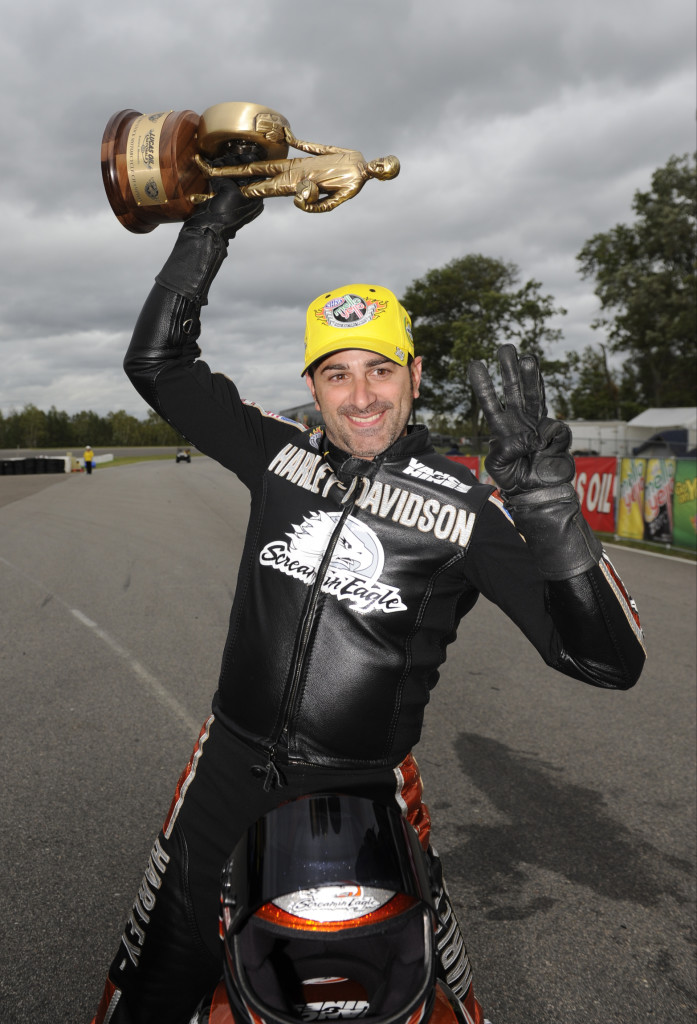 The NHRA tour now moves on to its most prestigious race, the Chevrolet Performance U.S. Nationals on Sept. 2 – 7 at Lucas Oil Raceway at Indianapolis.  Also included will be the Traxxas Shootouts for $100,000 grand prize for the nitro categories on Saturday and Sunday.