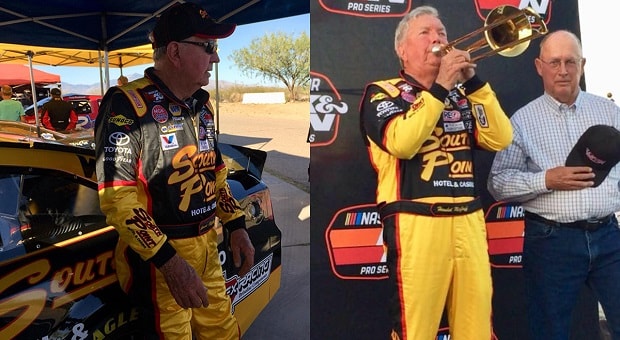 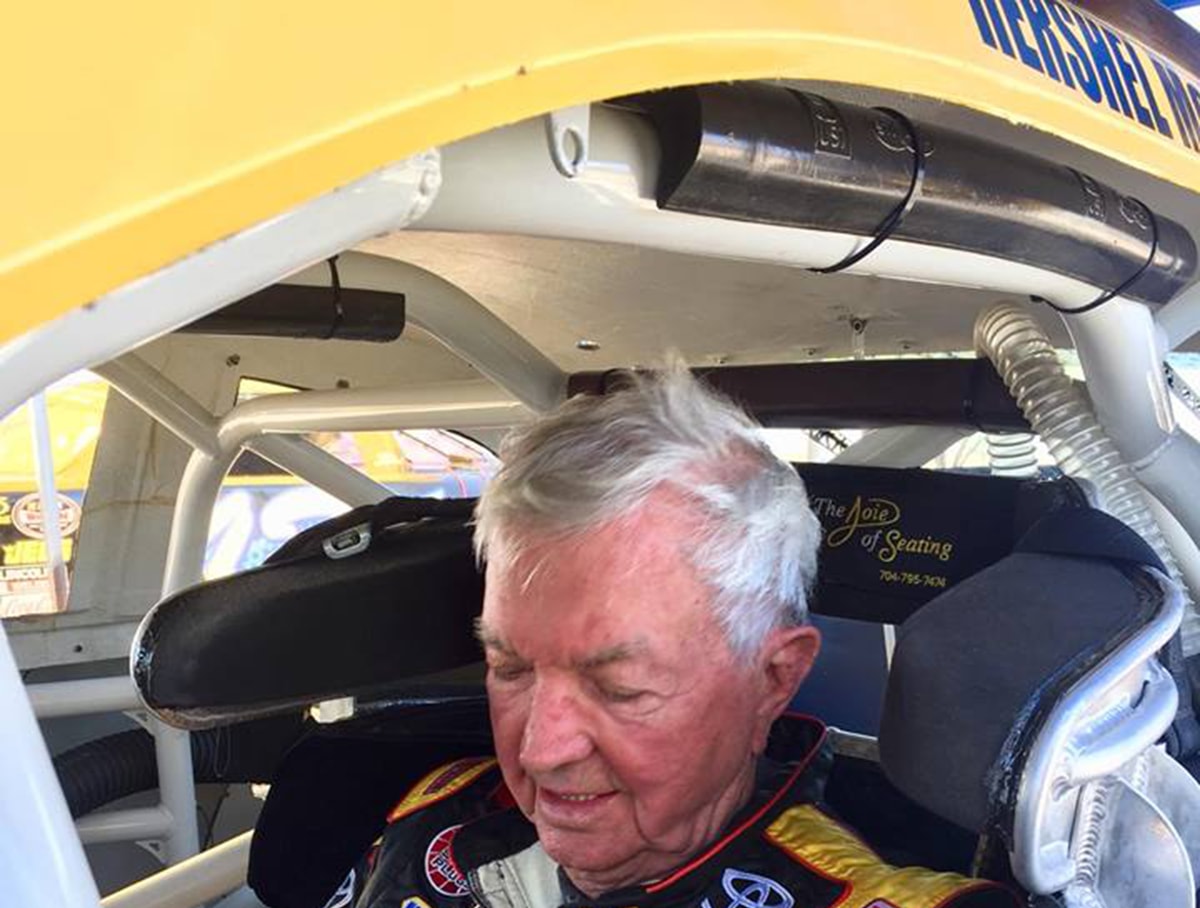 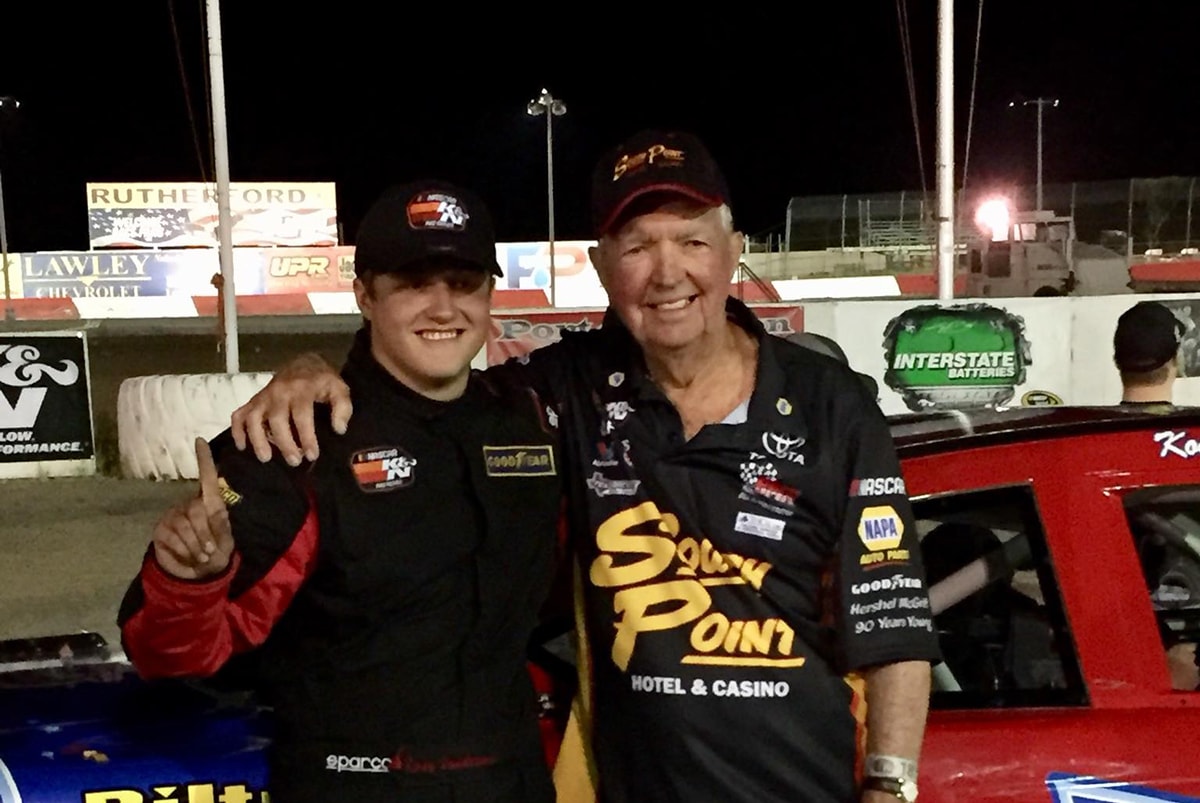 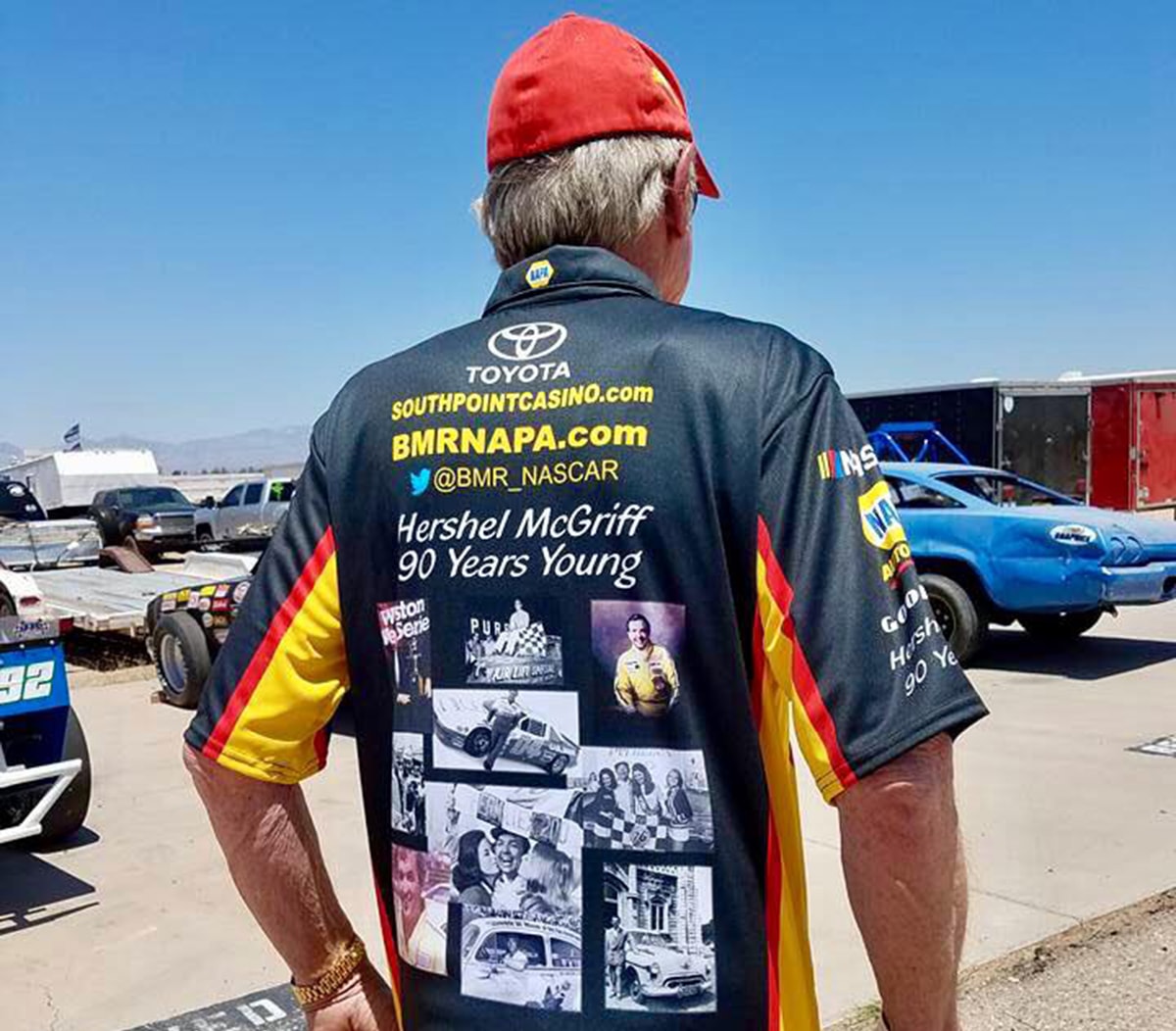 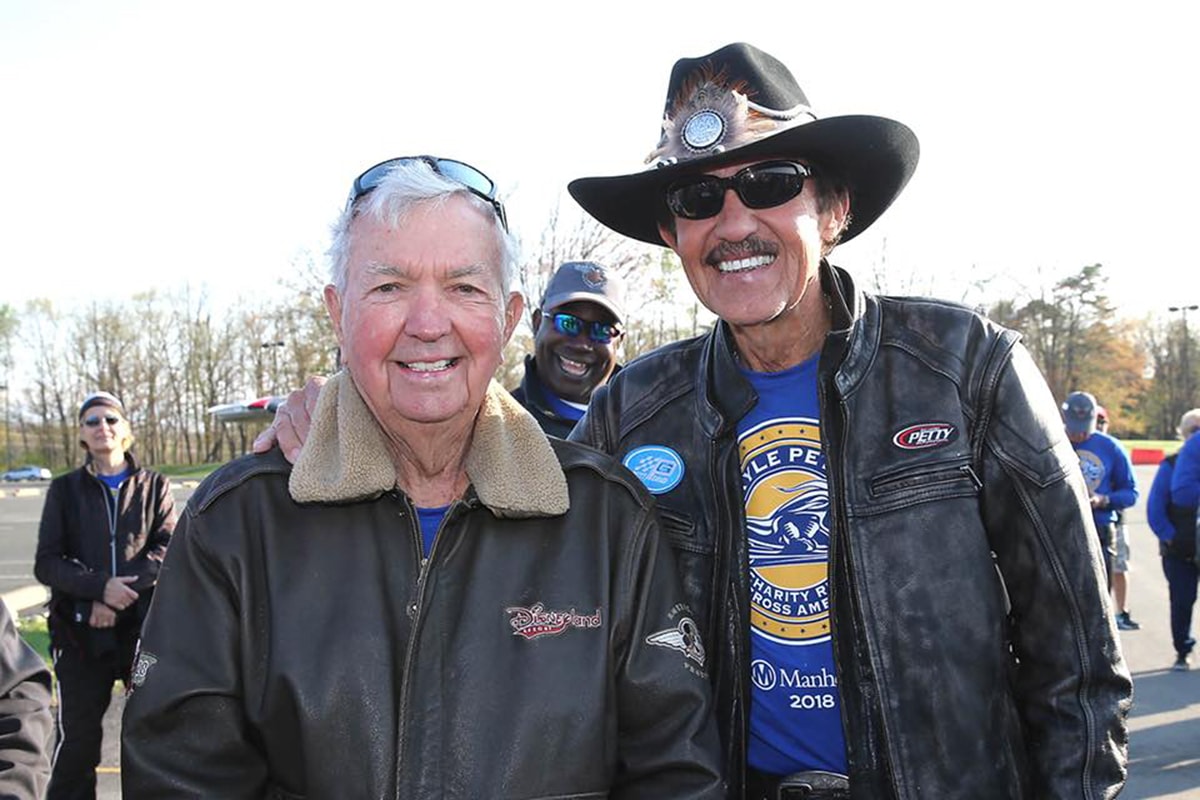 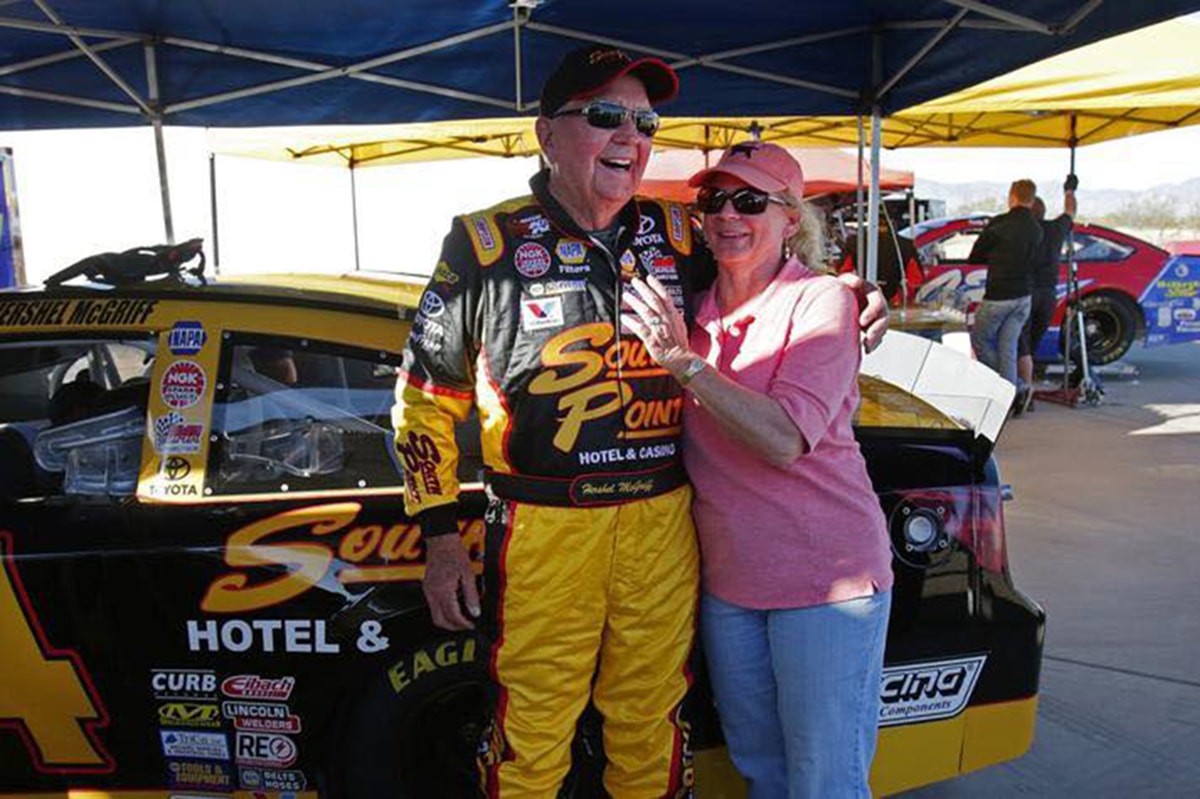 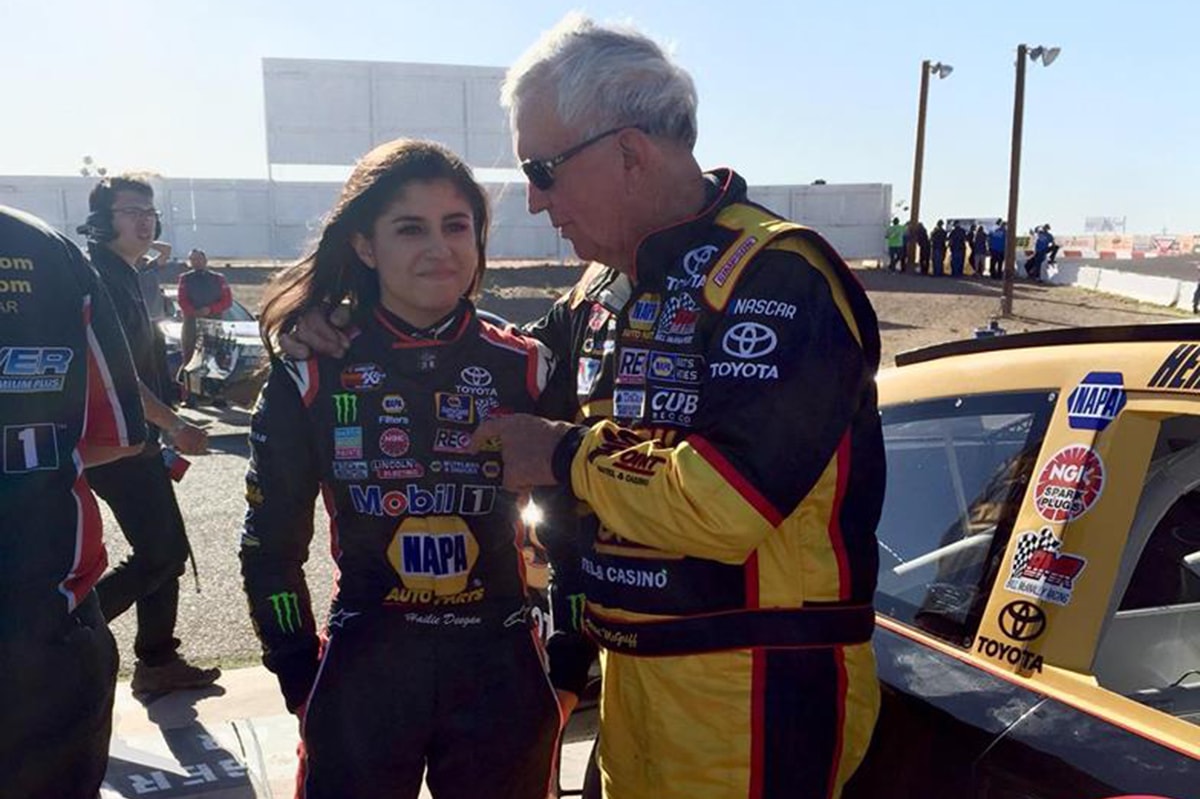 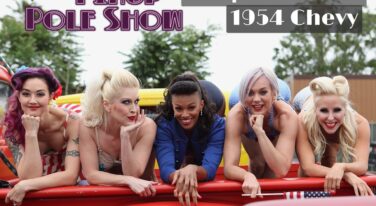 One of the nominees for the NASCAR Hall of FameClass of 2019 took to the track again in Tucson on Saturday, May 5. Hershel McGriff was named one of NASCAR’s 50 Greatest Drivers back in 1998. He’s also the driver with the longest-running career, with his first race being the Southern 500 in 1950. McGriff competed at what is now the Cup level for parts of 28 years before switching to the NASCAR K&N Pro Series West where he competed for 35 seasons and gained legendary status.
McGriff has four wins in NASCAR’s premiere series, all occurring in the 1954 season. His star shone though in the K&N Series. He won a total of 37 races in his 35 year career, a number which lands him in the third all-time for the West Series. He also has 35 poles from the K&N Pro West Series, which tops the series.
His real breakout season came in 1986, several years after joining the West series. That was the year he won the Series title. That was also the start of a string of ten years in a row where he finished in the top ten in championship points. He was awarded the Bill France Award of Excellence for his contributions to racing in 1991.
McGriff’s professional racing career took off when he won the legendary Carrera Panamerica race in Mexico. NASCAR founder Bill France, Sr. saw him race and convinced him to “head South” (McGriff was racing regularly in and around Oregon at the time) and join him at Daytona for racing on the beach. The rest, as they say, is history.
McGriff retired from full-time racing back in 2002, when he literally drove into the pits and walked away from his car during a K&N West race at California Speedway (now Auto Club Speedway). When asked what happened, why he pulled into the pits and walked away, he said “Well, I just retired. If I cannot keep up, be near the front, have fun and be comfortable - which is how it has been - then I think the time has come. I know I’ll miss it. I’ve always enjoyed the people and everything that surrounds it. And I always like the competitiveness of it.” His last appearance in a K&N race was a race at Sonoma Raceway in 2012, where he finished 18th.
After announcing his intention to race at Tucson Speedway, McGriff says that NASCAR contacted him and said he had to receive medical clearance to start driving again. “NASCAR, they want to make sure - you know, 90 years old, a lot of them are in a wheelchair or pushing carts around and walkers, that kind of thing. They don’t quite understand my abilities, I guess. Since I hadn’t driven for over three years, they sent a guy out here (from NASCAR HQ in Charlotte) to test me. I had to run 50 laps on the track. I borrowed my son’s car to do it in. Then they had to have a letter from my cardiologist to make sure that my ticker was good and so my cardiologist, he put me through the whole thing.”
Unfortunately, McGriff didn’t do as well as he’s used to in the race on Saturday. He was still running at the end of the race, but had only finished 94 of the 100 laps, which put him last in 18th place in the Port of Tucson Twin 100. He drove a Toyota owned by his friend’s team: Bill McAnally Racing. After the race he said “I’ve had a great life. I wouldn’t backtrack for anything. I have family that’s with me and behind me, so it’s great.”
Back to Post
About Mike Aguilar 388 Articles
Mike's love of cars began in the early 1970's when his father started taking him to his Chevron service station. He's done pretty much everything in the automotive aftermarket from gas station island attendant, parts counter, mechanic, and new and used sales. Mike also has experience in the amateur ranks of many of racing's sanctioning bodies.