It’s Bristol, baby. The last great coliseum, populated by gladiators. Ryan Preece held off a strong late run by Justin Allgaier to win the XFINITY race on Saturday, a race that NASCAR pushed up a bit due to a threat of rain. Sunday’s race was also bumped up due to a threat of rain, but it didn’t help; the race was still postponed a few minutes while the track and pit lane were dried. Kyle Busch outlasted the rain, sleet, and strong performances by Kyle Larson and Jimmie Johnson to bring home the win on Monday. 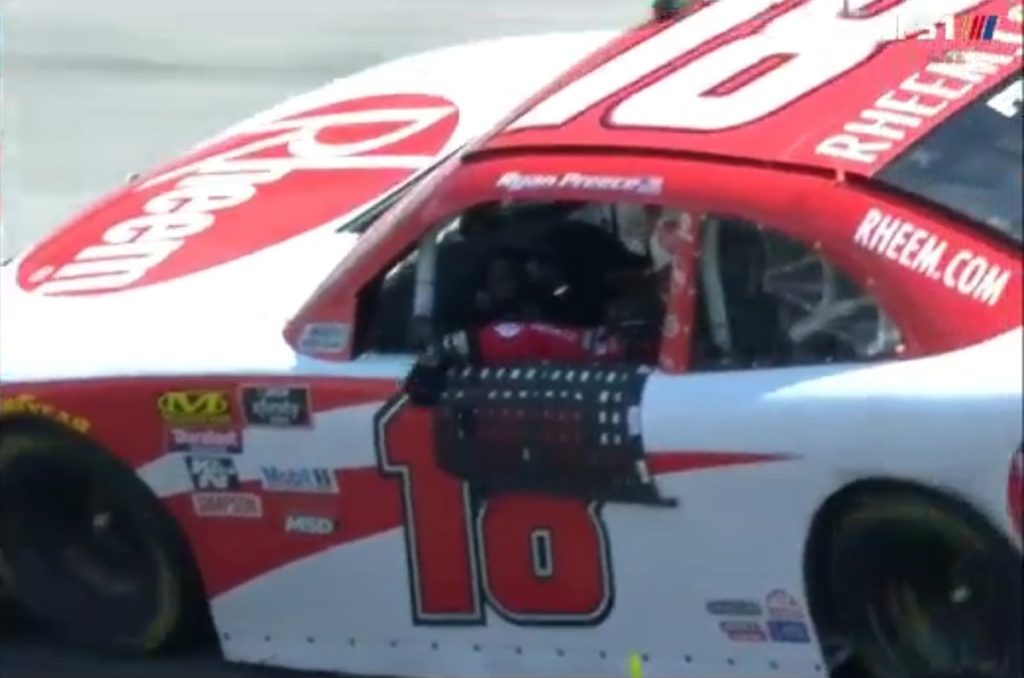 Saturday’s XFINITY Fitzgerald Glider Kits 300 at Bristol Motor Speedway was a humdinger. It was pushed up by an hour by NASCAR in an attempt to get the race in before predicted rain shut down the track. Justin Allgaier drove his JR Motorsports Number 7 to a big lead on the drop of the green and was lapping the field by lap 30. 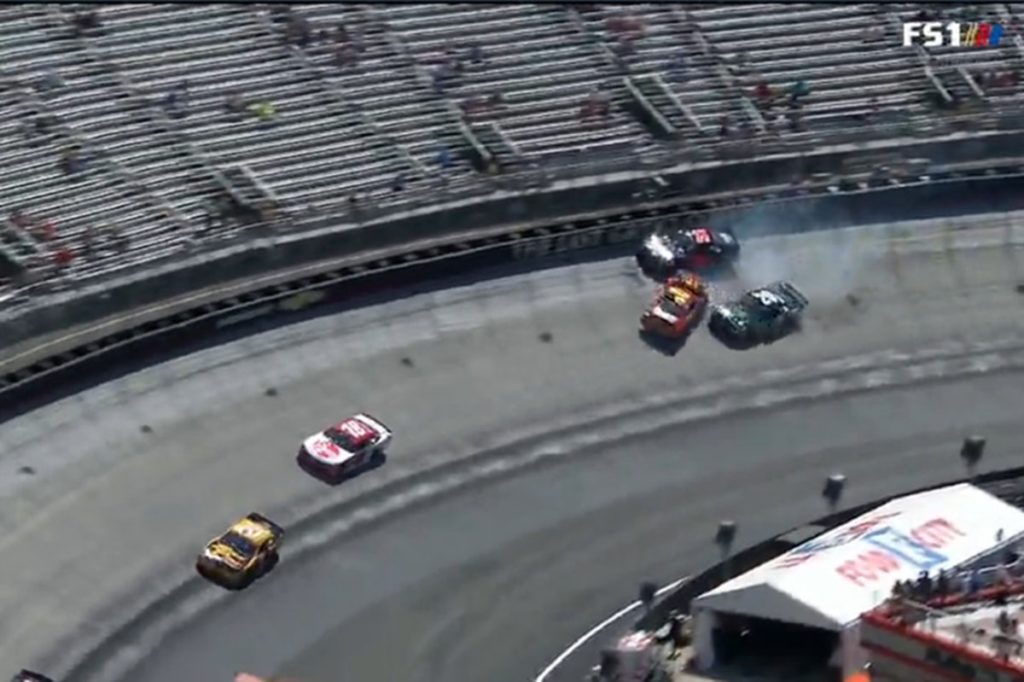 NASCAR threw a competition caution at lap 45, by which time there were only 19 cars on the lead lap. Christopher Bell drove his Joe Gibbs Racing Number 20 to victory in Stage 1, but was then involved in a wreck that brought out a five minute red flag. At the time of the wreck, his was the strongest car on track. His teammate Ryan Preece in the 18 took the green checkers for the Stage 2 win. 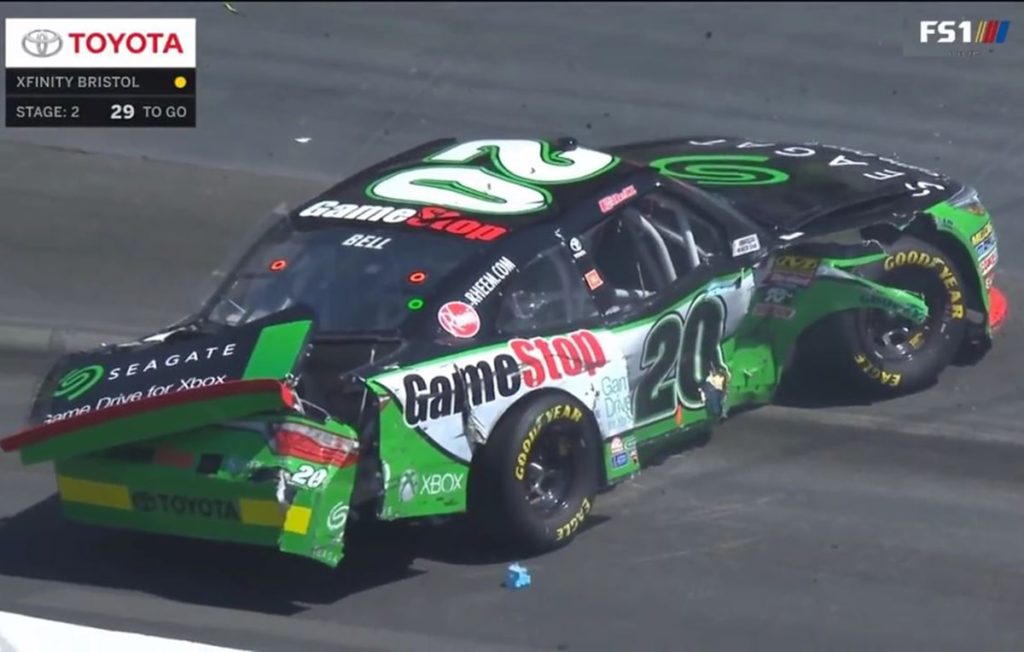 The leaders kept up a blistering pace and when the green flag dropped with 13 to go after the last caution, there were only 13 cars on the lead lap, with five of those taking the wave-around to get back on the lead lap. Ryan Preece in the JGR Number 18 held off strong charges by Allgaier and Daniel Hemric (another Dash4Cash competitor) in the Richard Childress Racing Number 21. 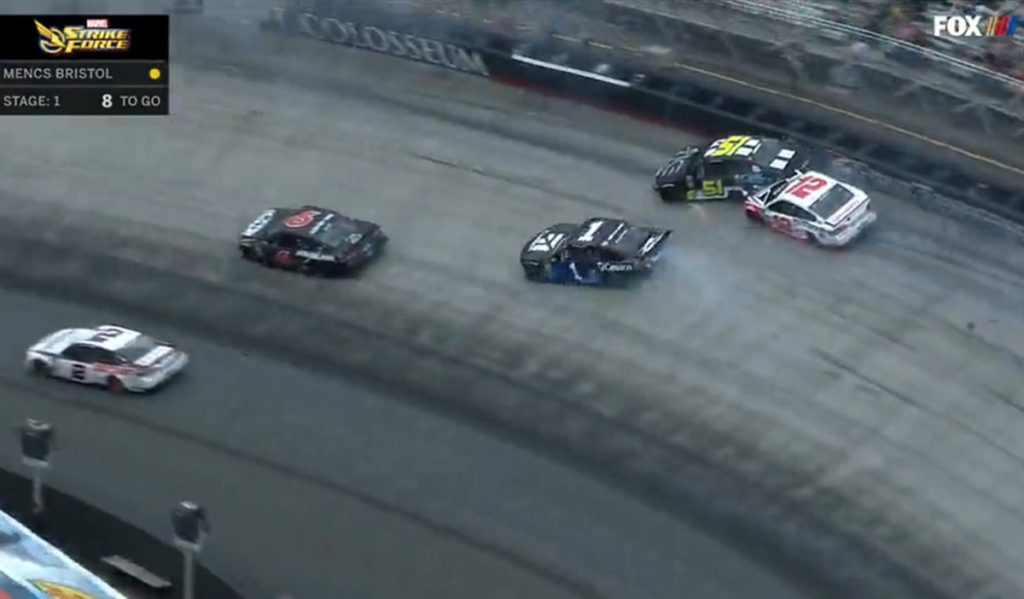 Sunday’s Monster Energy NASCAR Cup Food City 500 was also moved up an hour due to threatening weather. Tension was in the air as a result of the inclement weather and the first 50 laps were exciting, with one wreck bringing out a red flag of approximately 20 minutes. Everyone started complaining that their cars were loose and things quieted down for the second half of the stage, which was won by Brad Keselowski in the Penske Racing Number 2. Teammate Ryan Blaney had the dominant car until he was swept up in a lap 118 caution.

Stage 2 kicked off with a sense of urgency, because rain had already brought out the caution and a red flag to allow track drying. After the race’s third red flag at lap 156, Kyle Larson shot out to a seven second lead over the rest of the field in his Chip Gannasi Racing Number 42. And then, with 45 laps remaining in Stage 2, Mother Nature made another appearance, this time putting enough of the wet stuff down for NASCAR to throw in the sponge for the day, postponing the completion of the race until Monday. 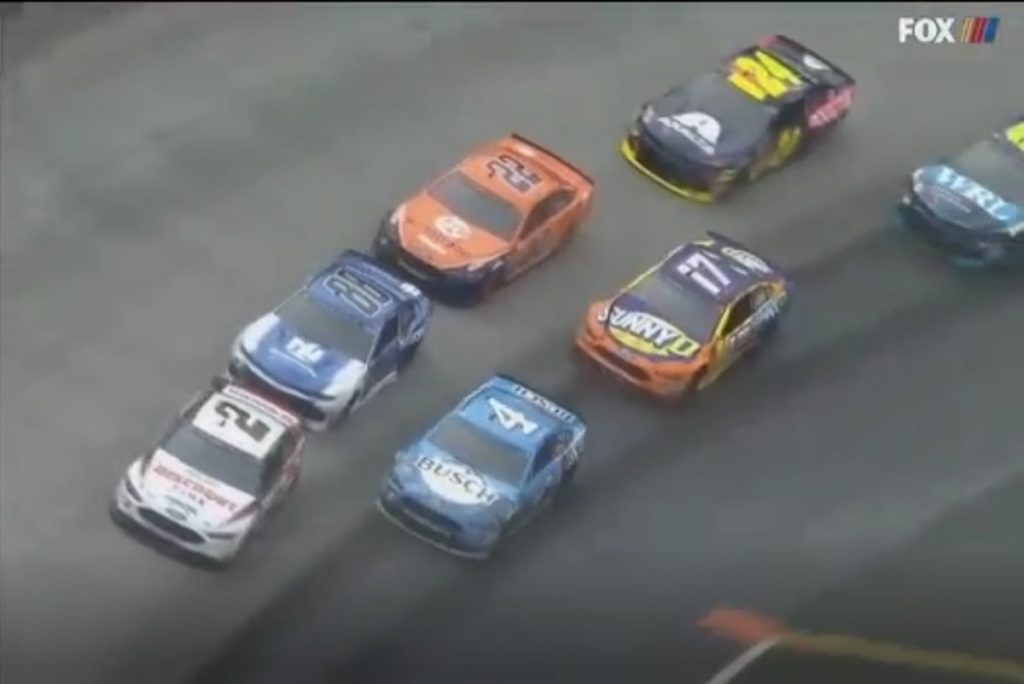 Come Monday, drivers were sitting in their cars with the covers on because Mother Nature was still in the driver seat, showering the track with small flurries of rain interspersed with hail and sleet. The command to (re)start engines was given almost an hour late and the cars were led out on several parade laps to help heat up the VHT/PJ1/sticky stuff/traction compound track officials laid down in the bottom groove. Larson again jumped out to a commanding lead, but Brad K was able to run him down in lapped traffic and pass him for the stage win. 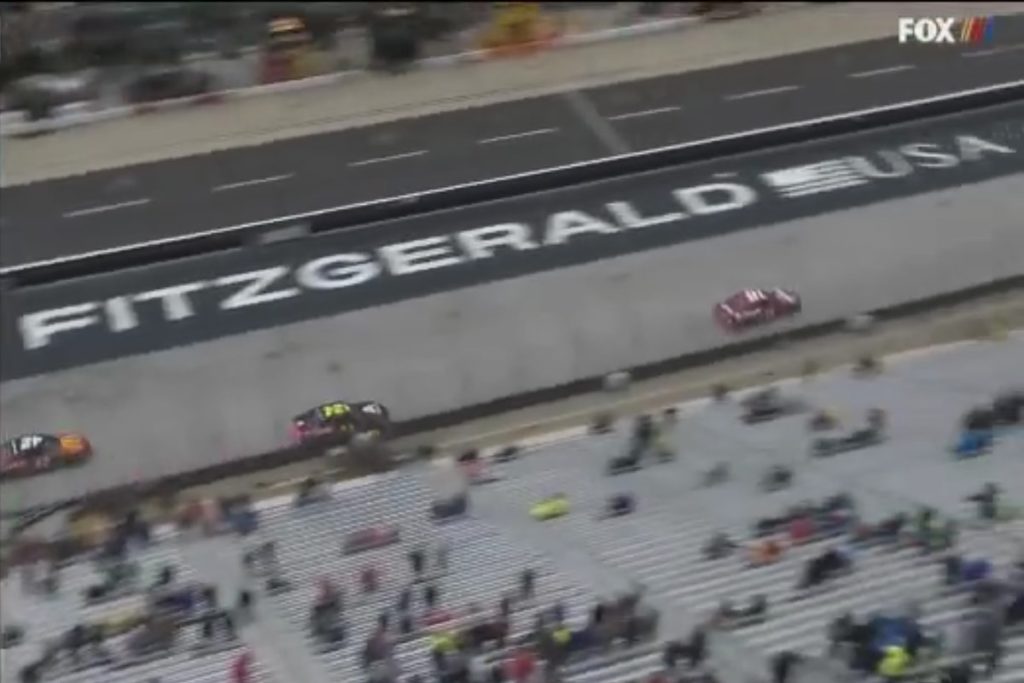 Larson again jumped out to another big lead after another caution. Fans were kept on the edges of their seats due to exciting racing action throughout the field. Larson got turned but was able to gather it back up and only lost two positions. It was then noted by the broadcasters that Kyle Larson has led more laps at Bristol than anyone else without a win at the famed track. 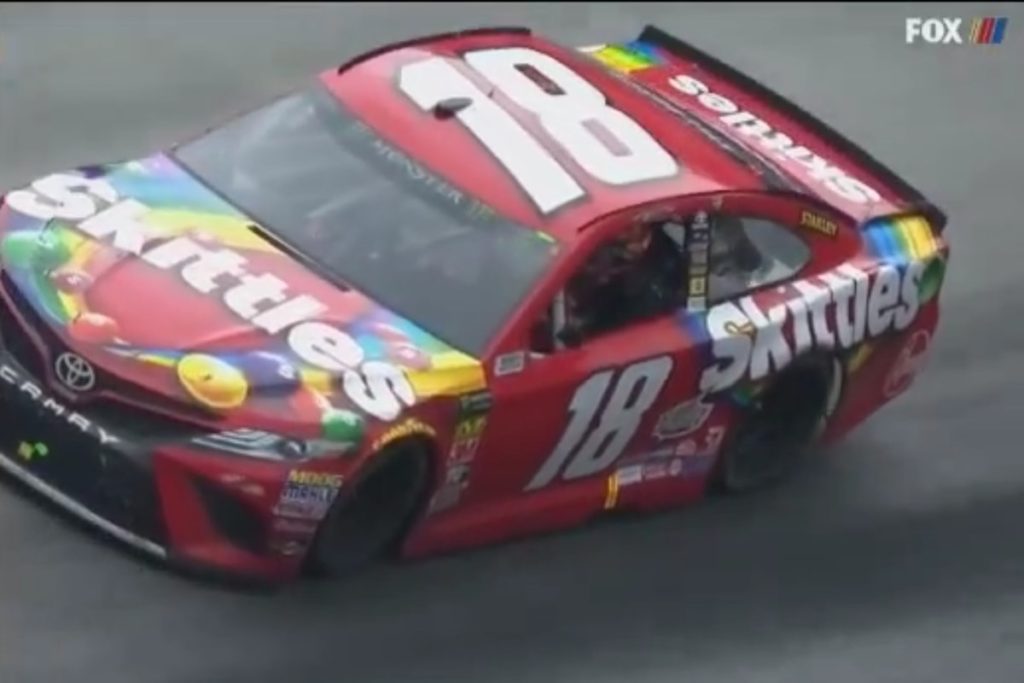 The racing continued to excite no matter where in the field you were looking. The final stage was afflicted with a series of cautions due to the battling going on, and because of this and the rain, Goodyear and NASCAR released an extra set of tires to all teams. Kyle Busch was able to pass Kyle Larson after the race’s final caution and was able to maintain his hold on the lead for his second win a row this year. Larson came in second, and Jimmie Johnson turned in Motorsports’ best performance of the year with a third place finish. 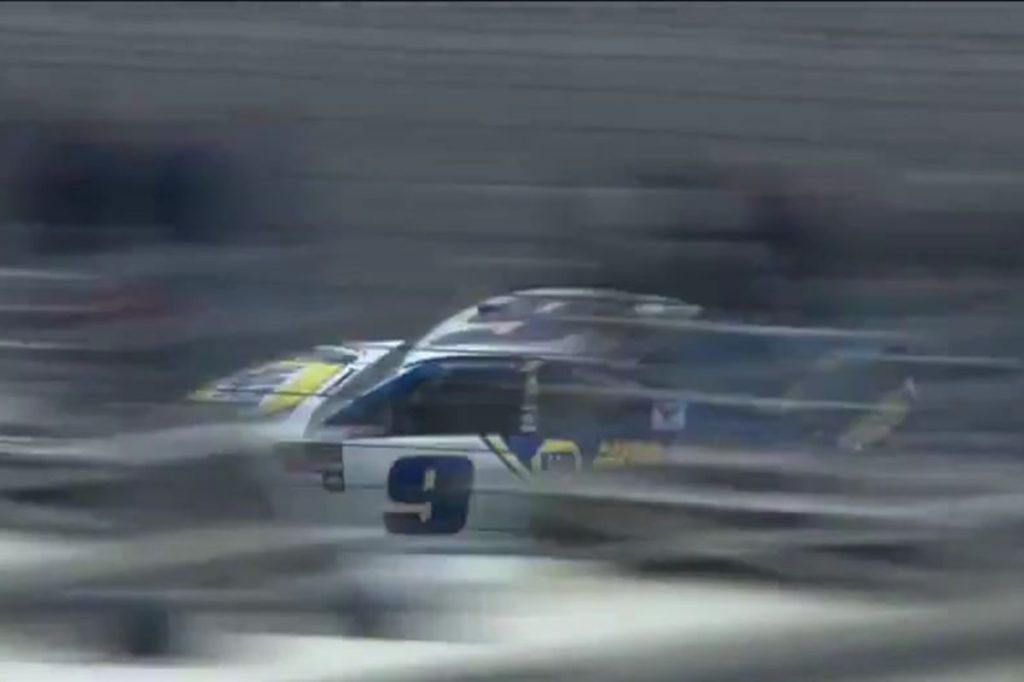 Chase Elliot’s Hendrick Motorsports Number 9 team was assessed another L1 penalty after the Texas race, marking the second time his team has been penalized. This penalty was for violation of Section 20.4.8.1, Rear Window Support and Structure. Something in the rear window structure broke, similar to what happened with Kevin Harvick earlier this year. Chase lost 20 driver points and Hendrick lost 20 team points for the infraction. Crew Chief Alan Gustafson was also fined $50,000 and suspended for two races.