The bridesmaid finally became the bride this weekend at Auto Club Speedway as 24-year-old Chip Ganassi driver Kyle Larson finally fought his way back from several runner-up finishes to find his way to the Winner’s Circle following Saturday’s Service King 300 NASCAR XFINITY Series race. He followed this triumph up with a win in Sunday’s Auto Club 400 at Auto Club Speedway.
Service King 300

The NASCAR XFINITY Series final weekend on the West Coast kicked off with another familiar name on the pole. The No. 22 of Joey Logano would pick up the pole for Saturday’s Service King 300 and continue his reign for a race-high 70 laps, but would struggle in holding off Southern California native Kyle Larson. 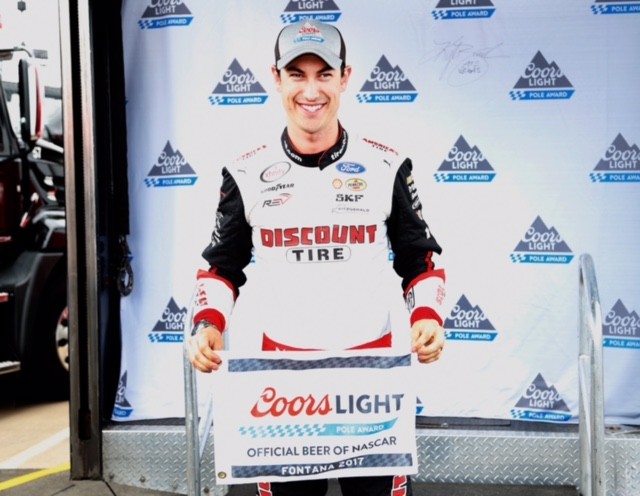 Larson and Logano swapped the lead throughout this race, including the final laps of this race. After the No. 33 of Brandon Jones plowed into the outside wall on Lap 142 to bring out the final caution of this race, both Larson and Logano would pit for fresh tires while under caution. This would give Larson the chance he needed to ultimately take the lead and the win after exiting pit road first and holding off Logano for his first race win of the weekend at Auto Club Speedway. 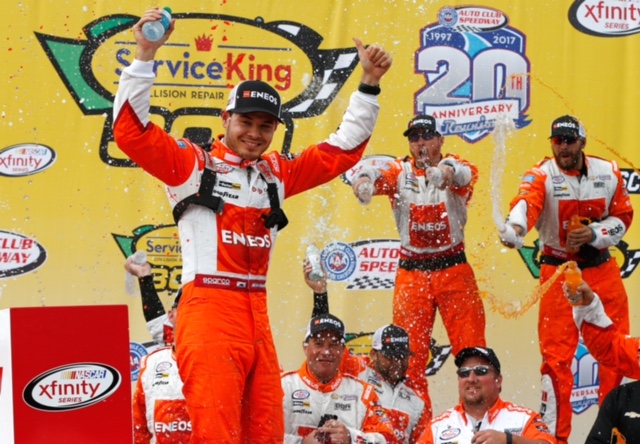 “The racing there at the end with Joey was awesome,” said Larson, who got his first NASCAR XFINITY Series victory at the 2-mile track. “I had just a couple-lap fresher tires than he did, and I was able to chase him down. That was a lot of fun.”

Before taking his first win of the season, Larson would have to overcome obstacles like challenges in practice, as well as a pit road speeding penalty to take the checkers from Joey Logano on Saturday.

“I honestly didn’t think we would be here yesterday,” said Larson. “I was struggling bad in practice. Fought the balance a lot throughout the race, too. Finally, the last few runs, we hit on it and it felt good for the short run and throughout the long run.”
Auto Club 400 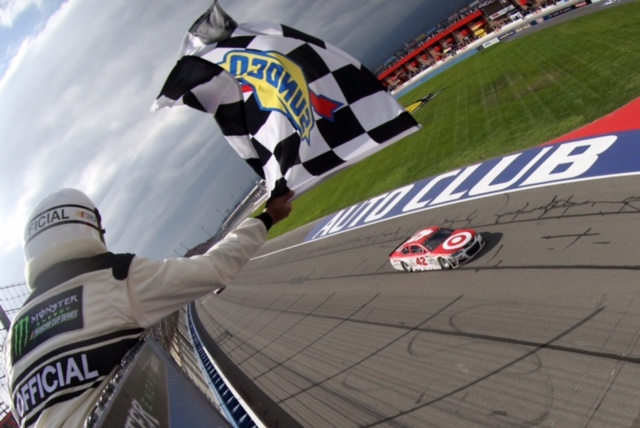 After taking the win in Saturday’s XFINITY Series race, Larson would continue his hot streak by picking up the pole and ending his recent bridesmaid status to become a bride to the Monster Energy NASCAR Cup Series after his second win of the weekend at Auto Club Speedway.

Following the drop of the green flag, Larson would prove that his No. 42 Chip Ganassi would be the car to beat as he took the win in Stage 1, but he would struggle to retain this lead and eventually would lose it to Martin Truex as he came at Larson at a blistering pace to take the win in Stage 2. Despite this, Larson would keep his cool as the laps wore down in this race to fight off four cautions and subsequent restarts, as well as having to pit on lap 193 of a planned 200 for fresh tires.

Despite Denny Hamlin, Martin Truex, Jr. and Jamie McMurray staying out on the track, fresh tires would prove to be the right call as Larson quickly surged back to the front after a Lap 196 restart. He passed Hamlin for the top spot through Turn 2 a lap later and held this lead through an overtime restart to finally find his way to Victory Lane at Auto Club Speedway.

“I was staying as calm as I could be, but also frustrated at the same time,” said Larson of the late-race stops and starts. “It seems like every time I get to the lead at the end of one of these things, the caution comes out and I’ve got to fight people off on restarts. Our Target Chevy was amazing all day. We were able to lead a lot of laps today. Truex was better than us that second stage by quite a bit, but we were able to get the jump on him following the restart and led pretty much the rest of the distance.”

I had to fight them off there after the green flag stops and that was a lot of fun. We’ve been so good all year long, three seconds in a row. I’ve been watching all the TV like ‘He doesn’t know how to win,’ but we knew how to win today, so that was good.”

The Monster Energy NASCAR Cup Series will make its first short-track debut next weekend at Martinsville Speedway. Stay tuned to RacingJunk.com for all the details from the paperclip.