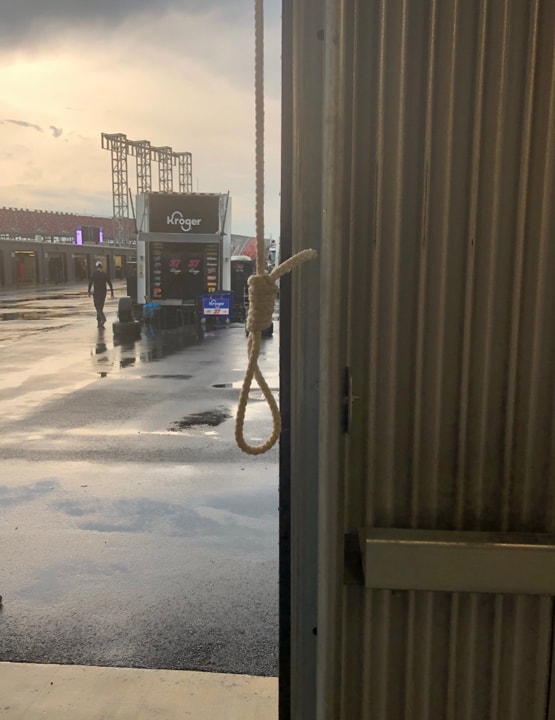 NASCAR ran its Talladega race a day late, due to persistent weather issues. It had other issues to deal with on an overcast Monday, not the least of which was a noose found hanging in the garage space on the No. 43 Chevrolet, owned by the legendary Richard Petty and driven by Darrell “Bubba” Wallace, the sole Black full-time racer in NASCAR’s premier Cup Series.

Much has been said since Sunday’s discovery. The NASCAR community has circled its wagons around Wallace and the No. 43 team, escorting the driver, team owner and car to the front of the 40-car field on Monday afternoon. The result of that parade was the showing of community, of togetherness and the belief that racism has no part in NASCAR garages, pits, grandstands and online.

Wanting to get to the bottom of this noose’s existence, the FBI was called in to investigate the noose and NASCAR performed its own due diligence concerning the noose’s appearance in the garage stall that had been, reportedly, untouched since October of 2019 when the Cup Series departed after its second trip to Talladega Superspeedway.

Not only did NASCAR investigate the Alabama track, it went to all 20 of its racetracks to see how garage doors were opened and closed. Examining 1684 stalls in all, NASCAR found 11 rope pulls and only one – only one – noose tie. That was the rope in No. 43’s stall at Talladega.

The FBI’s investigative conclusion stated this noose appearance was not a racist attack on Darrell “Bubba” Wallace. However it did refer to the rope as a noose at least four times even as it concluded that its appearance did not constitute a federal hate crime against Wallace.

While the rope wasn’t tied into the form of a noose when teams arrived at the track last October, NASCAR president Steve Phelps said video showed it was tied in that fashion sometime during the race weekend. Despite intense investigation by NASCAR and the FBI over the past few days, the sanction is “unable to determine who tied it or why it was done. The ultimate conclusion has been to ensure this never happens again.”

As a result, added cameras will be placed throughout all NASCAR garages and the series will sweep garage areas prior to team entrances to ensure this never occurs again. The series is also mandating sensitivity training for all participants.

While the internet has exploded with people stating the noose was a hoax to ensure more media attention for NASCAR, Phelps – who stays away from Twitter and other social media sites as much as he can – said, “Anyone who suggests it was a hoax, manufactured… I just find that personally offensive. I don’t know how people, frankly, think that way.”

The only regret Phelps said he had concerning the announcement that there was a noose in the garage stall of the No. 43 car, discovered by a crew member on Sunday during the rain delay, is that he should have said “alleged noose” rather than stating it as he did. “Some felt the phrasing of words used in our initial statement were not right. I take full responsibility for that. Based on evidence we had, we felt one of our drivers had been threatened. It was our responsibility to react and investigate and that’s exactly what we did.”

Phelps wanted and needed to bring some form of closure to this incident before NASCAR’s Cup Series performs its double-play at Pocono this coming weekend. Because Wallace has been vocal in his desire to see removal of the confederate flag and its disappearance from NASCAR race tracks, Phelps felt he needed to protect the driver and his team during last weekend’s race and going forward. “We will have increased security for Bubba,” he said.

There have been heightened emotions everywhere in this country over the past month, due to recent police and public attacks on Black members of the US community. Those emotions have spread worldwide as people grapple with the horrors of racism. Phelps, in his Thursday press conference, noted the confederate flag pulled by a plane over the track, protests outside the gates and threats since Wallace called for the flag’s ban. “It is a sensitive time in the entire country.

“Bubba,” Phelps stated, “is a warrior. He’s strong, he’s resolute in what he thinks is right. I just find it incredibly disturbing that there are those out there that feel the need to spread hate and falsehoods. I want to thank Bubba Wallace for his leadership over these last three weeks,” Phelps concluded. ”He’s done nothing but represent this sport with courage, class and dignity. We all need to stand with him. I know I’m going to.”