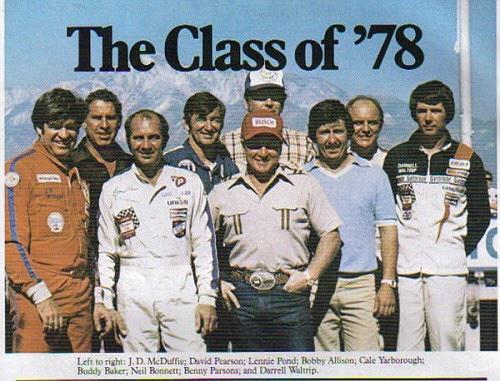 When NASCAR secured CBS Television as a strategic broadcasting partner in 1979, the agreement included the inaugural Busch Clash which featured the largest purse per mile event in the history of the sport. The winner of the race would take home $50,000 for 50 miles (or 20 laps) of racing.

The clash was the brainchild of Busch Beer brand manager, Monty Roberts, who pronounced Busch the “Official Beer of NASCAR” in 1979 and sponsored car owner Junior Johnson and driver, Cale Yarborough.  Roberts wanted to showcase the competitive aspects of stock car racing, with the Busch brand front and center.

The inaugural race pitted nine cars (seven  Oldsmobiles, one Ford and one Mercury) against each other. At the time, the only way to enter was to win a pole position from the year before, which meant the drivers were the cream of the crop including Cale Yarborough (8), David Pearson, (7) and Lennie Pond who, coming off his best season ever, had scored five pole positions the previous year.

Yarborough had won the pole in the last three races (Rockingham, Atlanta, and Ontario) and was the one everyone had their eyes on going into the race weekend. The Busch Clash field was set on a blind draw with Benny Parsons starting first and  Buddy Baker on his outside. Baker had just won the Daytona 500 pole the previous Saturday with a speed of 196.049 mph.

“I can just see it now, with all nine cars coming to the finish line side-by side,” said Yarborough. “With that kind of money on the line, just about anything is possible.”

Daytona International Speedway had just been repaved and the superfast 2.5-mile superspeedway was set for a quick 20 laps.

At the drop of the green,  Baker, with his W-I-N Racing Team of master wrenches Jake Elder and Herb Nab plus top engine builder Waddell Wilson, had his Oldsmobile set on domination. Leading all but two of the 20 laps contested, he beat Waltrip to the checkered flag by a single car length. Rounding out the finish were Yarborough, Parsons, Allison, Pearson, Pond and Bonnett – each running at the finish. McDuffie was the only one to not go the distance falling out early with an engine failure.

The race took just over 15 minutes to complete and Baker averaged a rocket-like 194.384 mph in the caution-free event, banking a cool $50,000 to the Harry Ranier-owned team out of Charlotte, N.C.

A smiling Baker came to the Daytona press box for the winner’s post-race interview and told the gathered media that he wished all the races would pay this well. It was Baker’s first win since the 1976 Talladega 500 and his ‘hard charger’ reputation fit exactly into the format.

The special non-points race with its tremendous purse brought additional awareness to the Daytona 500,  resulting in a sell-out crowd the next weekend for the now legendary 1979 Daytona 500, as NASCAR’s first flag-to-flag coverage on CBS.

There was nothing like the Busch Clash in motorsports at the time and it was the start of the special races in NASCAR, leading to events like the Sprint Unlimited at Daytona and the former ‘The Winston’ All-Star race in Charlotte starting in 1981.