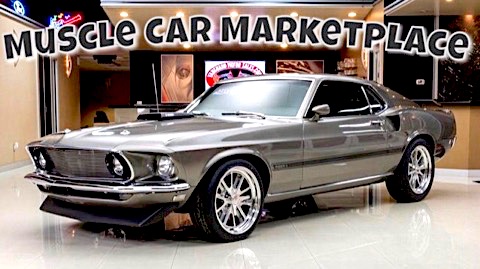 Ford’s Pony Car
The Ford Mustang has been featured on more movie sets, sat in more driveways, had more adolescent kids drooling for their own someday, than perhaps any other car in automotive history. Ford’s modern day Mustang is much different than its predecessor. It’s more refined, much faster, more intuitive today from technology than it’s ever been before. Personally, I’ve yet to drive the 5.0 Coyote Sporting with its new fully independent-suspension. I look forward to the day. Gobs of automotive admiration have flowed down hill from its many admirers.

‘67 Ford Mustang
Ask anyone what they think the most famous Mustang of all time is and they’ll likely reply with the name Eleanor. Ford’s 1967 Mustang played the supporting role next to Nicholas Cage and the rest of the star studded cast in“Gone ‘n 60 Seconds.” As we would soon learn, Eleanor was to be stolen last. She didn’t disappoint either. Neither has the Mustang, as it’s remained a bright spot for the automotive manufacturer. Even during its difficult years. There’s no doubt that Mustangs have been a favorite of the muscle car community over the years. Everything from performance modifications, to sleek looking Saleens, owners could do just about any kind of customization to their car they could dream up. Like the time Carrol Shelby got his hands on a Mustang, he built the amazing ride you see before you. A 1967 Ford Mustang GT500e.
What To Look For When Buying A Vintage Mustang

Be sure you get a good look at the bottom of the inner door skin, and where the outer skin folds over it. This is a common area for rust on early Mustangs. It’s also an easy place to see if there’s been any collision damage. Tape lines, miss matched color, overspray, and any clues of previous body work can be found easily here.

Look closely at the shock towers on any vintage Mustang you’re looking to buy. This area is another common area for rust on these Fords. If the seller tells you they’ve been repaired, then have a professional you trust look over their work. It’ll save you some heartache in the end. After all, you don’t want to buy yourself a parts car for $8k.

Assuming you’re looking at purchasing a running Mustang, you’ll probably be looking at Ford’s 289 c.i. If the owner claims he’s selling a good running Mustang then check the oil level as well as any other fluids. All should appear new. If not, they’re probably old. If everything looks okay, make sure to have a compression test done. It’ll give you the best idea of what condition your soon to be motor is in.

While the car is on the hoist it would be wise to inspect the underside of the Mustang. This is the simplest way to see if the Ford has had its floor pans, trunk pans, etc. replaced. See any new undercoating? Any materials that look the same but have different texture (old vs. new)?

Another excellent spot to see what kind of condition your sheet metal is in is the inside of the trunk. Remove any installed interior pieces and look at the back sides of the quarter panels. Then look at both sides consecutively. Do they appear the same color, same age? See any rust? Always look at the frame rails. This is the area of any vehicle where damage from previous accidents hide.

What are they worth?

Hagerty lists the value of a 1967 base Ford Mustang at $17,000. Fastback models with a 390 c.i engine sail north of $50,000 average retail quickly. That’s a heck of a cushion between those two figures! Largely, it implies that the first generation of the Ford Mustang (1965-1973) has held its value. This makes it a reasonably good option to consider when finding yourself shopping for a muscle car. Whichever year you choose, it seems as though the Ford Mustang offers a little bit of everything for any kind of person.