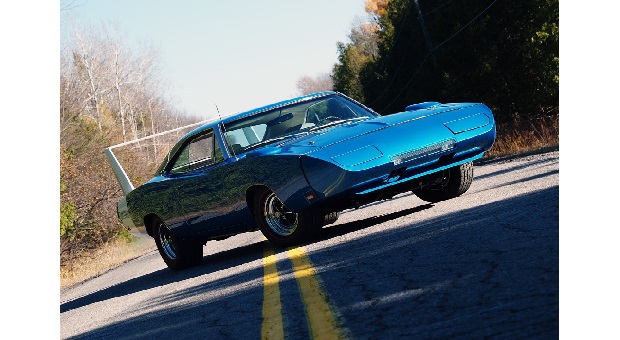 A sad soul can kill you quicker than a germ, but this has been a 14-year love affair with no ending in sight. What was a metal husk of rust in a field somewhere in the bowels of Quebec now, even at rest, looks predatory. It appears as though the wind designed it, but it was Al Stigter who, in his modified home-garage, with sand-dust on his face and spit on his hands, rebuilt the classic 1969 Dodge Charger Daytona to its former glory. In contrast, twelve days after its restoration, he took the car down for its debut to Alabama’s G-spot, the monster oval track in Talledega, and clocked it over 140 mph without a hiccup. Not bad for a car re-learning how to walk again. Al gives his typical shrug, his boyish face allows a sheepish grin, “all-in-a-day’s-work” attitude. “I didn’t want to push her too hard.”

“It took about three years of haggling to get it,” Al remembers as he brushes back a loose strand of light brown hair with the back of his hand. “It either had 229 miles on it or 229,000 miles. I couldn’t tell, all the gauges looked like tombstones.” He first laid eyes on the Daytona when he watched Wild World of Sports’ coverage of NASCAR races as a kid, and believes the Daytona represented the pinnacle of all Charger models. Al should know, he owns a dozen Chargers – each one at various levels of restoration. One has a front-end shaped like two roads splitting in opposite directions. His wife slid it into a telephone poll.

So what is so unique about the 1969 Dodge Daytona that makes it one of the most sought after muscle cars, reaching cult status? For many manufacturers, proving oneself on the racetrack was the precursor to success off the dealership floor and Ford was the Ring-master. Dodge answered with the mighty Charger, but even this paled in comparison to the introduction of the Daytona. The car was impossible to mistake and captured everyone’s imagination and superlatives. Looking like a car version of the Concorde with its shark-like drooping nose cone – an extension of 19 inches housing retractable headlights. But the most outrageous modification was the rear 2-foot high spoiler, high enough to enable the trunk to open unimpeded. This uncompromising accoutrement perched on like an eagle expanding its massive wingspan reduced drag by a remarkable twenty per cent. Though it seemed like an optical phenomena, it was Jim Hall’s Chaparral CAN AM cars, with their idiosyncratic 4-foot rear wings, that was the inspiration for the Dodge engineers.

Plymouth followed suit and suddenly the “tall tails” had changed all the rules of racing. The following year, Dodge and their Cinderella Daytona easily won the Championship. They won by such a wide margin that the NASCAR sanctioning body had a pow-wow meeting and came to the conclusion that it was un-American to be so imaginative, that these “funny cars” had an unfair advantage and imposed new rules for the ’71 season by curtailing the powerplants to 302 cu. That ended the honeymoon and Dodge withdrew the Daytona from racing at the peak of its success.

“I got to do wide open laps at Talladega with their incredible banking. What an awesome experience,” swoons Al.

“This is definitely an open road car. It loves long cruises and hates stop-and-go city traffic.” Al is like a big kid. “I have to admit, I enjoy pulling up to a kid in a Honda Civic and saying, ‘mine’s bigger!’” Of the 1,200 garishly coloured units built for the public, two engine options were offered, Al choosing the 440-engine, automatic transmission – all stock. The sections that took the longest to restore were the fabrication of new Daytona specific body panels, including spares, because of the damage from rust. We made the nose, fenders, hood and all the unique parts out of steel. They are as nice as the originals. The hardest part to maintain was my patience when restoring it and my composure when driving it!” He finishes the sentence with a big grin. Al kept to the original colour scheme, Factory B5 Blue with white wing and interior. So far only 5 are known in this combination.

I inquire if any of his Chargers have changed his life. How does he feel when he slips behind the wheel and feels the throttle, like sitting on a rodeo bull ready to buck? “You can’t be self-conscious driving this car. It just draws too much attention. The cars don’t own me, I own them. After all, it’s only a machine. I enjoy them but don’t get obsessive. I prefer to spend more time doing instead of wanting.” I ask Al what he intends to do with the car. “Enjoy it and put it in shows. I would like to explain its significance to the next generation.” Never one to mince words, Al has little time for the youth’s ephemeral desires. “To make things desirable and collectible, they need a good past. Today’s generation is too self- absorbed and lazy to make good pasts.”

About Clive Branson 35 Articles
Clive Branson is a photography graduate from Parsons School of Design in New York City and has since divided his career as an advertising creative director/copywriter and as a freelance writer/photographer. He is the author of Focus On Close-Up and Macro Photography and numerous articles for magazines and newspapers throughout North America and Britain. Clive lives and works in Ottawa, Ontario.