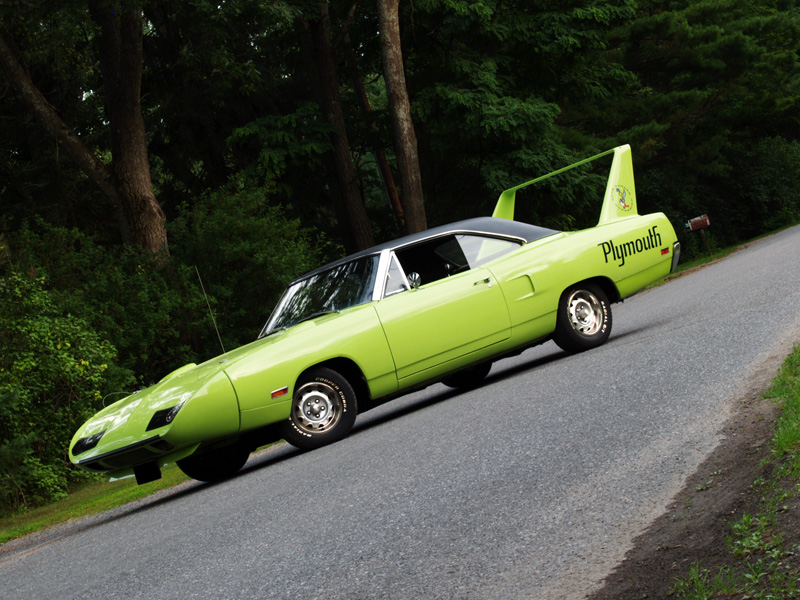 If ever there was a Mopar car that was loved or hated for both its performance and unconventional looks, it has to be the 1970 Plymouth Roadrunner Superbird. With its eccentrically-high rear wing and its shark-snout front grille, it’s unique to say the least. But to Derek Ebner, finding such a car was a life-long dream.

“It was pretty much the ultimate ‘barn find’ for a Mopar guy like me,” he recalled. “I waited all my life for a chance to own a car like this, and I wasn’t going to miss such an opportunity.”

As the story goes, the Superbird lay outside a Florida home for ten years like some discarded trash bin, with only a polyethylene cover blanketing it from bird droppings, blistering sun degradation and the odd hurricane. Nevertheless, it was an original with only 45,000 miles ticked on. It just needed some cosmetic nip and tuck and some new enhancement parts to regain its former glory – or so Derek thought.

“My favourite car is the 1970 Challenger. I have had 19 Challengers and have been obsessed with Mopar cars since I was a kid,” he said. “The story of how I actually found this car began when I considered restoring one more car, so in my mind it had to be something special. Price was certainly an issue, so I looked for something reasonable, even for a Daytona clone or a real Hemi car. After a few years of searching in vain, recoiling at ‘junk’ Chargers that were being offered for ludicrous sums, I thought of submitting to a clone of a Superbird from a Satellite or Roadrunner. They could still be had for a decent price.”

One evening, Derek had a friend over for dinner. Upon noticing a plastic model of a Daytona Charger on a shelf, the friend mentioned that he knew where one was for sale. At this point, Derek was skeptical and pointed dubiously to the model. The friend retorted no, not that model, a Roadrunner one. The proverbial eyebrow rose. Derek could feel heart palpitations and sweat in places that shouldn’t sweat.

“A Roadrunner Superbird?” came the anxious response. The friend admitted he heard about it a year ago. Others were just as curious but concluded it was an urban myth. After further investigation, it turned out that the car was now in Kingston, Ontario and was sold previously to settle an Estate deal. 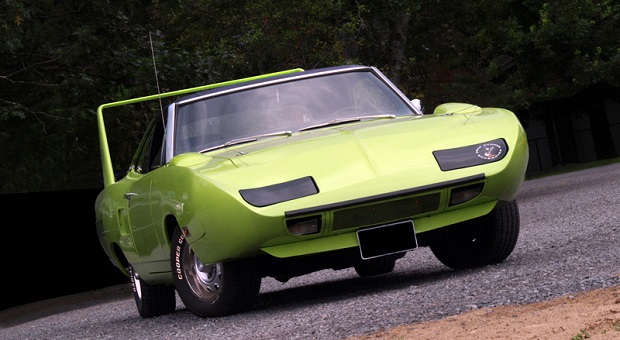 “What I know of the car ownership goes back to 2005, with owners in New York, Tennessee, South Carolina, Florida and Kingston,” Derek said. “I had a good examination of the car and it seemed pretty good overall. It needed a lot of TLC, but nothing I couldn’t handle. The owner knew how rare such an iconic vehicle was, and though we bartered the price down, it still wasn’t cheap; although it was battered and bruised, it was all original. So me and my friend, Garth Titley, loaded her up on a trailer and brought her home to my garage, where I just stared at her for hours.”

In fact, it took a lot of TLC. Most of the car was taken apart. Derek either repaired or rebuilt every inch of the car to get it roadworthy, and since it was a survivor car, he was determined to keep it looking authentic.

“When I needed parts, I tried to use used parts if I could,” he explained. “Though the car was original mechanically, there had been some bad maintenance issues over the years, like shorting out the dash and faulty wiring. Nothing worked electronically – most of it was burnt or fried. Some parts were broken or missing.

“I rebuilt the whole braking system, since it had seized; the tires were rotten, the paint had cracked and peeled like skin suffering from psoriasis. I cleaned and detailed the entire bottom and engine compartment, (gasket, engine and exhaust), dismantled the nose cone, cleaned and repainted the interior, re-fabricated everywhere that rust had devoured, removed the complete interior, fixed broken parts in the doors, under the dash…”

The list continued for another ten minutes. “But the car was complete with build sheet and Galen Govier documentation. It took two-and-a-half years to resuscitate it. When the day came and I turned on the ignition and heard its rumble, it was awesome! It was the first time it moved under its own power in almost ten years.”

Of course, none of this would have been viable had it not been for NASCAR. Ford dominated NASCAR for years and the proceeds were coming off the dealership floor, so Plymouth wanted more of the action – and winning NASCAR races was a good recipe. The stipulation was that for any car to race, a street model had to be available for public consumption with specific minimum numbers. In 1969, Dodge entered the Daytona (‘Charger 500,’ named after the number of production cars). It was the first American car to be designed using a wind tunnel and computer analysis, and it shocked the racing community into stunned submission. 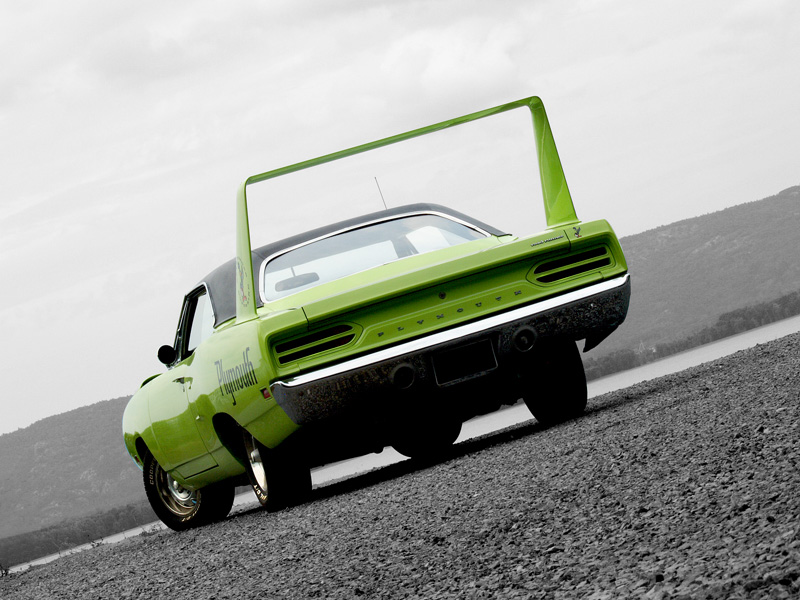 In 1970, Plymouth introduced the Superbird as Dodge’s ‘aero-car’ rival with its equally audacious appearance of exaggerated wingspan, submerged hidden headlights and conical nose. Its performance from the incredible downdraft owned every track to the point that NASCAR, instead of adapting to such engineering feats in aerodynamics, vilified it – and, in what seemed like a spiteful gesture, demanded that 2,000 units had to be made for the public instead of the original 500.

By the time the 1971 season began, NASCAR implemented rules enforcing an engine displacement no greater than 305 cu in. from the previous 440 cu in. (the street models came equipped with the options of a 426 cu in (7.0 L) Hemi engine or a 440 Super Commando. The height of the wing was at the optimum level for maximum downforce), or they had to carry much more weight than their competitors, thus rendering aero-cars uncompetitive. It was a sensational but ephemeral Cinderella story. Sadly, even dealership sales faltered, with the public preferring the Roadrunner without the cone and wing extravagance. Of the 1,935 units built, just over 1,000 remain in the United States; of the 34 sold in Canada, only five are known to exist, with a steady increase in value.

To photograph the car, we went for a spin. For all its bravura, the car moves like a bare leg slipping under silk sheets – smooth and easy to handle. Nothing rattled, clunked or strained. Teens wiped the drool from their mouths, men suddenly spoke in monosyllables as they stared with stupid grins on their faces, women smiled coyly and girls shouted, ‘I like your car’ as the neon FJ5 lime green flashed by.

“I love driving it,” said Derek. “People are so happy to see it.” But what does it feel like when you sit behind the wheel and hear that hungry gurgle and that wobble of anticipation from the engine? “I feel like I’m back in 1970. To me, the car is like a time machine.”

I asked Derek what his prognosis was for the future of classic cars.

“I think the future for classic cars is great,” he said adamantly. “We still have a long way to go before they run out. It is a shame that they have become coveted toys of the rich. What that means is those who really enjoyed them, and should continue to enjoy them (as ambassadors), can’t afford them.”

I was intrigued to know whether the car had changed him. “The car has not really changed me, since I have had great cars all my life, but what this car represents is more special than most other cars. When I open the door and turn the key, it is magic. When you hear the rumble and put her into gear, it is awesome. And when you are on the road and you lean on the gas, I’m in heaven. Lots of cars are nice, but this is a SUPERBIRD. That is that!” 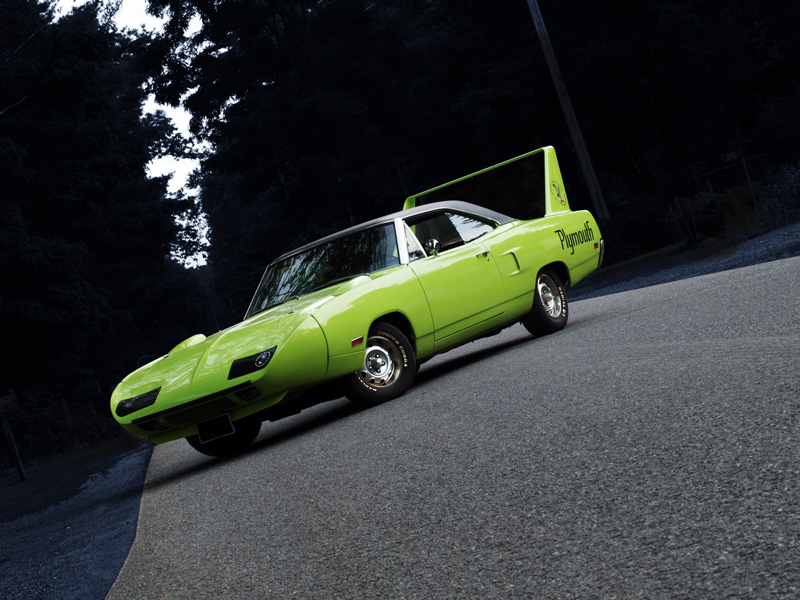 About Clive Branson 39 Articles
Clive Branson is a photography graduate from Parsons School of Design in New York City and has since divided his career as an advertising creative director/copywriter and as a freelance writer/photographer. He is the author of Focus On Close-Up and Macro Photography and numerous articles for magazines and newspapers throughout North America and Britain. Clive lives and works in Ottawa, Ontario.