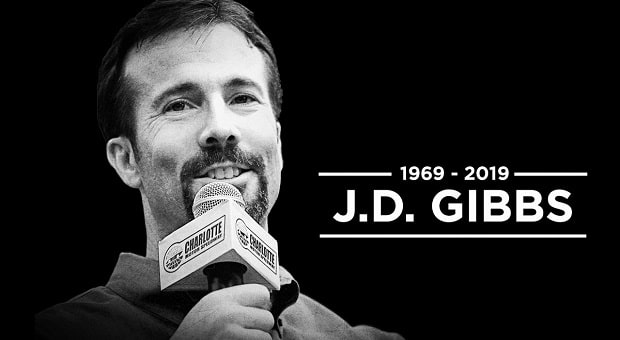 All of us here in the motorsports world have reason to mourn today as we awoke to learn of the passing of a very famous figure in the world of NASCAR. After following in the footsteps of his father from football to racing, J.D. Gibbs did his part to bring NASCAR team Joe Gibbs Racing into a successful future.

After starting with this team as a driver in 1998, the son of the former Redskins coach and eventual founder of Joe Gibbs Racing eventually climbed his way all the way to the top to become president and co-chairman of Joe Gibbs Racing. In 2014, he was tragically forced to leave the sport he loved to address a degenerative neurological disease. After four years of doing everything he could to battle this disease, 49-year-old Gibbs died, surrounded by his friends and family, on the evening of Friday, January 11.

Fans learned of the passing of Gibbs following an announcement from Joe Gibbs Racing on social media early this morning.

It is with great sadness that we announce the passing of Joe Gibbs Racing Co-Founder and Co-Chairman, J.D. Gibbs, who passed away earlier tonight at the age of 49 from complications following a long battle with a degenerative neurological disease. pic.twitter.com/kmyKRHupeq

Following this sad news, NASCAR officials, drivers and fans have begun expressing just how important Gibbs was and will continue to be to the sport.

Saddened to hear this. JD was truly a great person! A very positive and driven man. Dude always left you with a smile. Breaks your heart knowing such a good person had to fight what he did. Comfort knowing he woke up this morning in a bright shinny place. 🙏 https://t.co/ol7CAC6XO8

His car. His number. His signature above my door. I will always be grateful for what His family did for mine and the opportunity he gave me 14 years ago. Now more than ever #doitforJD

I am deeply saddened to hear of the passing of JD Gibbs. He and the entire JGR organization were key to my career in NASCAR and will forever be in my heart. My thoughts and prayers go out to the entire family at JGR during this very difficult time. pic.twitter.com/yQ42OFHAwZ

The last pic I had made with #JDGibbs this was definitely after his diagnosis with neurological disorders but the dude was still high energy and just happy about life.. RIP my man! @JoeGibbsRacing pic.twitter.com/JLAZ7MjxfY

We at RacingJunk.com send our deepest condolences to the entire Gibbs and Joe Gibbs Racing family and friends as well as all our fellow racing fans out there.