Modified stock car racing in the southeastern Wisconsin area got underway in the early ‘50s. When this form of competition started, the racers drove full-bodied cars that usually mated prewar bodies, with flathead Ford V-8s-on dirt tracks in the area. This style of car was soon replaced with cut-down prewar coupes and sedans with postwar overhead-valve V-8s. Many of the drivers used catchy nicknames to attract fans. Favorites included Billy “The Cat” Johnson, Fuzzy “The Hound” Fassbender, Etchie Biertzer “The Flying Grandpa,” Willie “The Rabbit” Goeden, Ken “Tweety Bird” Tlougan and Miles “The Mouse” Melius.

It’s been nearly 50 years since Melius raced, but in his 20-year career he accumulated 10 championships in midgets, stocks, and modified ranks.  He also won 21 track titles at places like Slinger Speedway, Cedarburg Fireman’s Park, Wisconsin State Fair Park (now the Milwaukee Mile‘s infield), Raceway Park in Beaver Dam, Hales Corners Speedway and Rockford Speedway.The modified drivers ran a grueling schedule, often racing five or six nights a week. Melius was one of the most popular competitors because he came from Slinger, which had its own track, and he had a long string of victories there. Melius was the second midget champ at Slinger Speedway and won a stock car title before moving to the winged modifieds for five more championships and an outstanding winning record. Some say he won every race he entered in 1962. His fame in Eastern Wisconsin was like that of Fritz Wilson, Rick Carelli and Wayne Stallsworth in Denver, another hotbed of early modified car racing.

According to Racing Wisconsin Melius became close friends with Bobby Allison, whose parents sent him to the Badger State to get a job and quit racing. “What my parents didn’t know.” Allison said, “Was that there were race tracks all over in Wisconsin.” Allison was taken under Meliu’s wing. While at the Milwaukee Mile Melius noticed young Allison. “He was the smallest guy,” said Mouse. “Then, we were at Slinger one night and we took him home to stay at the house. He’s been a good friend every since.”The first “Mouse” car that many of his fans remember was popularly known as his “Forty Ford.” It had a cut-down 1940 Ford sedan body. Melius crashed this car at the Wisconsin State Fair Park in 1962 during qualifying runs. .  He hit the wall head on at an estimated 85 mph. Mouse flew completely over a road grader parked outside the wall. He had a broken jaw and wrist, bad cuts and lots bruises. After the accident, Melius went to the hospital, but he got patched up quickly and came back to the track the same night to sign autographs. 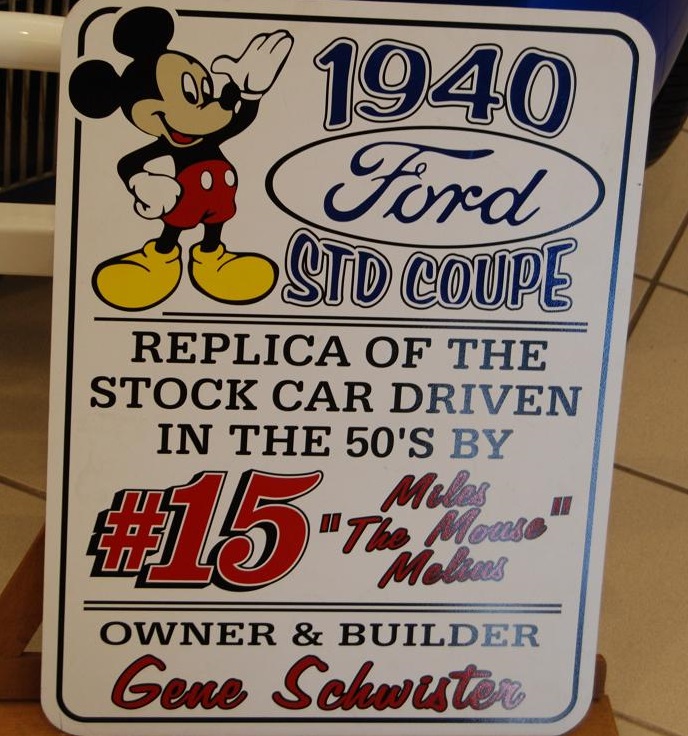 Among other cars Mouse drove was a Henry J sedan with a big Cadillac V-8 stuffed into it. He took this blue and white No. 3 racing car to many wins. The Mouse remained active in the local racing scene, attending races every week and showing up at many vintage events throughout the summer. In 2007, he was inducted into the Wisconsin Short Track Hall of Fame.