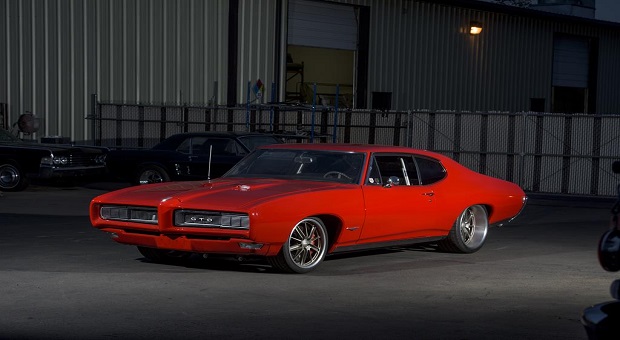 This 1968 Pontiac GTO was built by MetalWorks Classic Auto Restoration in Eugene, Oregon as their personal “shop car.”  The first recorded history of the GTO dates back to the early 80s when Rick, a customer of MetalWorks, purchased it for $2500.  After about three years of ownership, Rick had blue velour interior installed, since that was the style at the time.  After a while, the GTO was sold to a guy, then to another guy, until Rick eventually lost contact with it.

Then one day, Rick heard of a GTO for sale in the area.  He went and checked it out and the blue velour interior tipped him off to the fact that it was his old GTO.  He bought it back and after a few years of collecting dust, he convinced Jon Mannila of MetalWorks that he should purchase it.  He did, and decided he didn’t want to bring it back to stock.  This new direction would allow MetalWorks to build a car the way they wanted to build one, and to show people what is possible.

An Art Morrison chassis and a new GM Performance LS1 were ordered, but the build soon began to snowball, as many builds tend to.  The LS1 was used as a mock up engine, but a custom build LS3 by Wegner Motorsports had already been ordered, running a stage 2 cam, and pushing nearly 600 hp.  Then, before the LS3 was installed, it was topped with an MSD Atomic LS fuel injection system and coils.  Initial thoughts of an automatic were replaced with a TREMEC 6 speed manual  that is linked to a Ford 9″ with a 4.10 Trutrac posi rear end hosting 31 spline axles.  The GTO needed some “wow” factor, so 14″ Wilwood vented rotors with 6 & 4 piston calipers were ordered.  Then, a rollcage and five-point harness were installed just in case the possibility of racing came up.

While the crew was hard at work on the chassis and drive line, the body was striped, then sent to MetalWorks acid-dipping facility.  They applied several coats of “MetalWorks Red” paint and then buffed the body to mirrored perfection.  Then the assembly process began.  The hidden headlights were converted from vacuum to electric to do away with any more “lazy eyed” driving.  The factory gauges were replaced with OEM styled Dakota Digital replacements, as well as an electric climate controller from DD.  An Alpine head unit controls 2000 watts worth of stereo that are masterfully hidden throughout the GTO’s interior.  Speaking of interiors, the blue velour was past its prime and had to be replaced with a custom style leather interior that was stitched together by Jon Lind Interiors.

Above and beyond being an excellent promotion and sales tool, the GTO is a point of pride for the talented crew who built it.  If you spot this red hot ’68 cruising down the streets of the Pacific Northwest, prepare to be impressed.  If you’re looking to race, prepare to find yourself admiring the GTO’s freshly restored taillights!

About Chadly Johnson 17 Articles
I have a deep passion for telling the stories of survivor hot rods and customs from the glory days of hot rodding, but I bleed early air-cooled Volkswagens. Combine that with my "day job" of being surrounded by high end muscle cars and it means that I pretty much I have a camera surgically attached to my hand which keeps a smile on my face. Find Chadly on Facebook and Instagram: https://www.facebook.com/ChadlyJohnsonPhotography/ "Chadly Johnson" on Instagram.