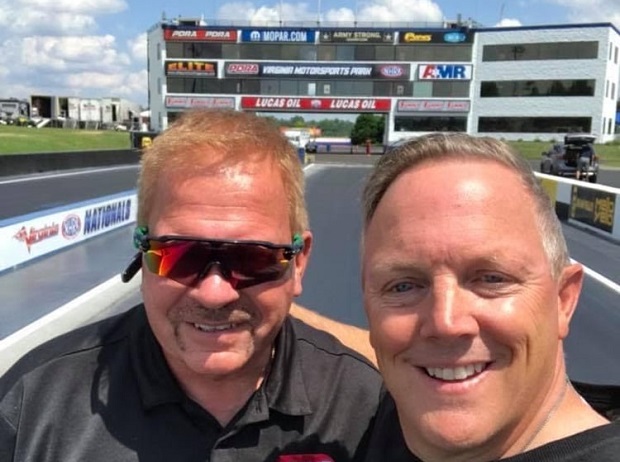 Terry McMillen’s return to Top Fuel is being eagerly embraced by fans of the personable racer.

2021 was a dichotomous year for NHRA Top Fuel racer Terry McMillen. The fan favorite, who earned a national Wally winner’s trophy at the 2018 U.S. Nationals, arguably the most coveted winner’s trophy of each year’s Camping World Drag Racing Series campaign, had to sit out the 2021 season because he’d lost Amalie Motor Oil sponsorship late in the 2020 campaign.

McMillen used that time away from NHRA national competition to mentor his son Cameron, who has been racing NHRA Jr. dragsters. The two-time national event winner learned as much as he taught his young son, realizing he needed to pay more attention to his son’s needs than his own. Racers, as we all know, have to be greedy in order to be successful. They have to come first, be the focus of their team and possess that killer instinct necessary to do battle on a drag strip.

Terry McMillen missed being a Top Fuel racer. When he came to 2021 NHRA Camping World events, he was pressed by his multitude of fans and by the community as to when he’d be back in a race car again? Having sold all of his equipment when his sponsorship dollars dried up, McMillen had to give a weak smile when asked about his future driving plans, accentuate the news that Cameron was learning the craft well, and keep stating he was looking for new opportunities.

For the 2022 NHRA season, Terry McMillen has found a new opportunity and will race a part-time schedule with Dan Mercier Racing, competing in between six and eight national events, even as he continues to support Cameron McMillen’s junior dragster career.

“We met Dan in 2017 when he purchased a Top Fuel dragster from us. We’ve stayed friends,” Terry McMillen revealed. “He runs a family operation – just like us – so it is a perfect partnership. After spending last year with Cameron at the track, I knew the only way I would come back right now, was if I could race around Cameron’s schedule.”

Not only did Dan Mercier eventually purchase the entire Terry McMillen Racing operation, but he offered use of that program to the seller, allowing McMillen to return to the same livery that he used to earn his first No. 1 qualifier at Lucas Oil Indianapolis Raceway Park in 2020.

“2022 will certainly be the long-awaited dream year for Mercier Racing,” Dan Mercier said. “There’s no better time to make a serious commitment to the big leagues. Having the opportunity to have Terry as a driver, will give the Mercier Racing team a tremendous chance to improve and compete against the best. Our focus now is on winning rounds and national events,” he declared.

In addition to supervising son Cameron at junior dragster races, Terry McMillen spent the past year pursuing other business interests. As he and Mercier began their conversations about competing in 2022, McMillen was adamant that he’d only take to the drag strip if it didn’t distract or conflict with Cameron’s racing schedule.

Mercier didn’t shrink from McMillen’s demand that he acquiesce to the driver’s need to tend to his son’s racing schedule. In fact, the Top Alcohol dragster racer, who has competed in a few NHRA Top Fuel contests, had his own needs to bring to the table. The deal would be done if Cameron would, in a few years time, be coaching Mercier’s now-two-year-old daughter in her Jr Dragster debut. Mercier has offered coaching tips to Cameron if he decides to jump from Jr Dragster racing to Top Alcohol Dragster.

“This season,” Mercier added, “will hopefully be just the beginning of a beautiful partnership of passion and performance between our two teams and families.”

Further information about the scope of this new team and its concrete plans are forthcoming. At the current time, intentions include possible races at the NHRA New England Nationals in Epping, NH, the U.S. Nationals at Indianapolis, and the fall NHRA Carolina Nationals on the zMAX Dragway strip outside Charlotte. Additional event participation is pending at the moment, but both Mercier and McMillen wanted to make sure their commingled future became known at the earliest convenience.