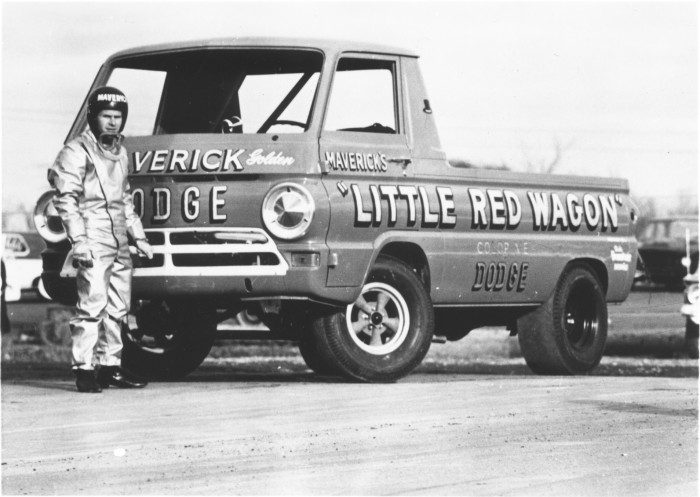 We met Bill “Maverick” Golden some years ago at an early muscle car show called Supercar Showdown that was held at Quaker City Motorsports Park in Salem, Ohio.  Golden was the celebrity at the show that year and he fit the role well.  He was personable and friendly with the folks at the show.  That’s why we were sad to get the news that he passed away on Monday, September 14 in North Little Rock, AR at the age of 81.

Golden’s big claim to fame was his wheel standing Dodge A100 cab-forward pickup called the “Little Red Wagon.”  The tail-dragging truck was seen in many magazines that covered the drag racing scene in the ’60s.  A miniature version was released as a plastic model kit.

After escaping the Midwest for the U.S., Marine Corps, Golden found his way to the West Coast where he started drag racing in California.  “Pappy” Hart gave him the nickname Maverick because he liked racing Mopars at a time when competitors were championing Chevys, Pontiacs, and Fords.  Maverick’s favorite ride then was a ’58 Dodge Custom Royal powered by a 361-cid four-barrel V8.

Golden was among the first racers to switch to racing cars with automatic transmission.  His ’60 Dodge cross-am racer had a beefed-up TorqueFlite Golden then built a 413 Max Wedge Dodge Dart and raced it for Bob Smith Dodge of Glendale, Cali., where he worked.  The car outran Don Nicholson’s car at the American Hot Rod Association’s 1962 Winternationals.

Golden was equally skilled as a mechanic and driver.  In 1963, Dodge Division provided him with a 1963 Dodge with a 426 Max Wedge engine.  He turned this into a memorable Super Stock Dodge nicknamed the “Yellow Cab” for its bright paint job.  The car won the Midwest Super Stock Championship and ’64 Max Wedge Dodge followed it.  Golden’s relationship with Dodge ultimately led to the creation of the original 426-cid Hemi-powered Little Red Wagon.

Golden did exhibition racing at fan-packed drag strips across the country with the first Little Red Wagon.  A second on – a 1965 model built into a race car in 1967 – was built for shows only.  The original Little Red Wagon crashed in 1969.  Its replacement crashed six years later.  Golden ultimately turned the ’65 show truck into his exhibition car and raced it until he retired in 2003.