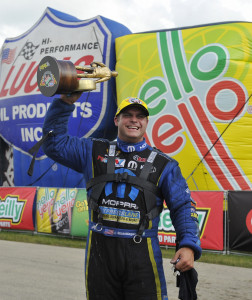 As the current NHRA Mello Yello Funny Car points leader, Matt Hagan goes into the Toyota Nationals on the Strip at the Las Vegas Motor Speedway championship minded and it’s a place and scenario he’s seen before.

The winner of two of the four completed NHRA Countdown races at Charlotte and Reading has pushed his Don Schumacher Racing team to the top of the standings just as he did in 2010, 2011 and 2013. He won his first Championship in 2011 and was runner up in the other two. With a 36-point lead in 2014 over his nearest rival of John Force and Courtney Force, Hagan is taking everything in stride with a smile on his face.

“We’ve been in this deal before,” said a self-assured Hagan. “Honestly, to put it into perspective, out of five years, for four of those, Force and I have been slugging it out for a championship. There’s nothing new to us or anything like that, but this is a new team that Don (Schumacher) put together. Last year, we led the points all year long and John (Force) came on really strong in the Countdown and we ended up finishing second overall. This team knows what it’s all about. They’re young and hungry and we’re very, very confident. I’m confident in my guys that they’re going to do a good job and I’m confident in my crew chief and I feel like I’m a good driver. So it’s a just a matter of getting in there and getting up on the wheel and driving the tires off that thing.”

The hard-driving Hagan may be in a relaxed mode, but if battling for a championship wasn’t tough enough, in Hagan’s rear view is not just the voicetress 16-time champion, John, but another JFR team member Courtney Force, 72 points back. She has won the other two Countdown events in back-to-back style at Dallas and St. Louis, but went out along with her dad, with a first round loss in Reading as Hagan went on to victory lane and the lead.

“I’ll tell you what; you know there’s a lot of stuff that can change very quickly,” said the driver of the Mopar/Rocky Boots Dodge. “When I rolled into the race there at Reading I said ‘you know, we want to lead the points, we want to win the championship, but first let’s worry about winning the race. Wallys on our shelf don’t change, points do. It’s real important to keep in mind that points are set up to change and we reset them at the beginning of the Countdown and we have keep doing what we’re doing. To be honest, everybody is saying ‘John Force, this, John Force, that, but to be 100% honest and not wanting to sound rude about anything; I don’t worry about John Force. I can’t change what that man is going to do. You have lots of respect for him as a driver and what he has done in the sport. I can’t change how he’s going to race, who he is going to race, how they are going to perform. Whatever that is, it’s not up to me. All I can do is focus on what I have in front of me and that’s my job at hand. When you simplify it like that, it takes the pressure away from it. Especially knowing when you’re doing a good job and you’re going to continue to do a good job. The cards are going fall as they may. So really focusing on what John is doing or could do, or a point this way or a point that way, it would only add pressure on yourself that’s not needed because you can’t control it, so why even worry about it.”

He didn’t get to this point without an effective game plan and so far things are going in his favor. He’s armed with a great crew chief in veteran Dickie Venerables and just like Hagan, Venerables has seen his fair share of championship campaigns. Just as proficient as Hagan is behind the wheel, he knows his crew is building a winner every time they go up to the line. The way this DSR team approaches the race weekend is not leaving anything to chance and with four rounds of qualifying, there’s a lot to be learned over those two days.

“It all starts with Friday qualifying,” said Hagan. “The first lap out of the box really sets you up. That’s why we struggled a little bit during the regular season. We didn’t qualify well on Friday. What happens is that first run needs to be stellar to put you towards the back of the pack for that Friday night run. On that run, you need another good lap as well. That first day is so crucial to the race. We have to set ourselves up on the top side of the ladder of being able to have more of a shot of going rounds on Sunday. When you qualify number eight or nine, man alive, you really have a tough card first round with a car that’s running as good as you. If you qualify below that, it’s gets tougher and tougher. So it’s very, very important to qualify in the top half, at least in the top five anyway, from my perspective. Not always No. 1, I really don’t care about being first. One is hard to win from and I’ve won from one before and I’ve also won from fourteenth. Things have to play out and yet, it all has to come together. I want to be in the top five on Friday and I know Dickie does too and that way we set ourselves up for some opportunities on Sunday.”

Those opportunities are few and far between, so any advantage is beneficial. Besides the two Forces he has to battle with, he’ll be the first to confirm that the hardest cars to beat are his own DSR teammates of Tommy Johnson, Jr., who is fourth in points, Ron Capps, and Jack Beckman.

“It is,” said Hagan. “Honestly, last year we led the points and we came on strong and just to tell you how competitive Don (Schumacher, car owner) is, my teammate (Ron Capps) took me out of championship contention last year. I had to sit there and watch it happen. Out of the six Countdown races in 2013, three of those races, I was put on the trailer by my teammate. It really is tough. Those boys are tough. They all have the same equipment we do, the same parts. Our win this year in Chicago was really special for us because we were able to go through all our teammates and put a ‘W’ on the end of the day. What happens is they have the same R and D, the same chassis, everything is the same except the driver and the boys wrenching on it. When you do put a teammate on the trailer, it’s tough, don’t get me wrong, it’s great, but it’s still hard to do. For me, you can’t help it, you’re going to affect your teammate, and you can’t help it. I know several times because it cost me a championship.”

Since Hagan made his debut in the Funny Car ranks in 2008, he has always been a part of the Countdown era and understands how the six-race playoff series should be played and most of the time, it’s left up to the driver’s ability to get the job done.

“Well, we’ve won one cause of it, and lost one cause of it,” said the matter of fact, Hagan. “I’ve been on both sides of it. I’ll put it to you like this; we all know what is going to happen at the beginning of the year. Everybody knows the Top 10 move on for the last six races, it’s nothing new. Whether they saved their parts for the end of the year or set themselves up to win in the beginning of the year. It’s a chess game. Everything you do, you have to be methodical about it. You have to have a plan. In this race you’re going to do this or try that, so you just don’t run through it. It is what it is. Dickie Venerables has a great game plan. He’s one of the smartest crew chiefs I’ve been around as a racer on Sunday. He’s not trying to go out there trying to run low ET every round. He’ll do what it takes to turn the win light on and also be smart enough to be a racer out there on Sunday. The track might hold this or we might do that. We may back it up for conditions and then they’re depending on me for two-hundredths on the tree and then we can go down the racetrack and turn on the win light on. That’s what you call racing. I’ve been around a lot of crew chiefs that pound on their chests as ‘Look what I did; I was the quickest of that round’. That’s great, but you also can get bitten by that. You have to be a smart racer and I think that’s what our camp has. We have guys that race hard work hard and have that desire to win.”

There are only two races remaining on the schedule and although Hagan has a two round lead over all his rivals as the leader, a win in the Las Vegas Toyota Nationals could be just the thing he needs to get him over the top, or at least a little closer.

“Well, there are two pretty good cars out there and you can’t count Courtney (Force) or Tommy (Johnson, Jr.) out of it, either. If we have a good race in Vegas, sure, it will take the pressure off of us. Honestly, I don’t think there’s a lot of pressure on us now. No one is expecting us to win and they are all rooting for John. You look at the stuff out there. If this was a popularity contest it would have been over a long time ago. But thank God, its drag racing.”