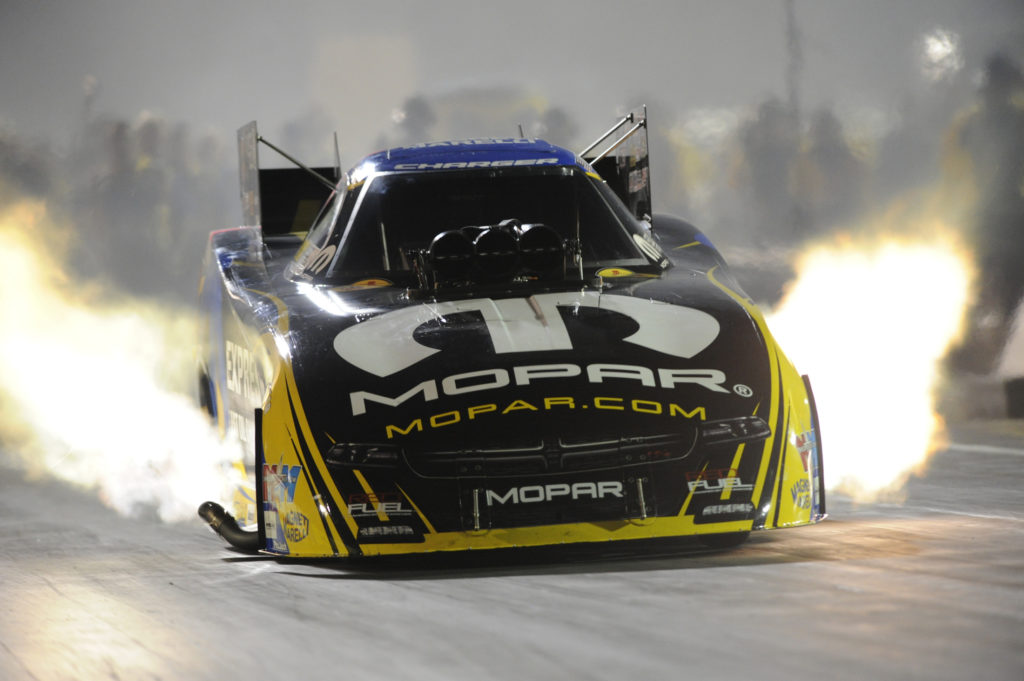 The rest of Matt Hagan’s 2016 NHRA Funny Car season can be summed up in the words of a famous Elvis Presley record – ‘It’s now or never.’

Just two NHRA races remain on Mello Yello Funny Car tour, and Hagan’s promise of a third championship is 88 points away from his Don Schumacher Racing teammate Ron Capps and 24 points out of second place from another DSR stablemate, Tommy Johnson, Jr.

For Hagan, it’s just business as usual as he enters this weekend’s Toyota Nationals on the Strip at the Las Vegas Motor Speedway, the penultimate event of the season.  It leaves only eight rounds of racing to get the job done, and the only way to secure rounds is to turn the win light on.

“You know, it’s almost like anything, you have to put it perspective,” said the matter-of-fact Hagan.  “We have to have two exceptional races and they have to mess up.  You never want to wish anyone any bad luck or nothing like that.  You have to be on your game.  If the opportunity arises, you have to capitalize on it and put yourself in a situation where you can make something happen for yourself.

“John Force was a guy I kind of grew up watching, and he gets into situations and makes things happen.  Right now, we’re in one of those situations.  I think we just have to rise to the occasion and just be ready.  There’s nothing that you can really do; a lot of it is out of your control, and you have to focus on what you have control over in your situation.  We’re 88 back.  That’s quite a bit with only two races to go.  But hey, we’re still in this thing and we still have a shot.  We just have to be on point when the time comes.” 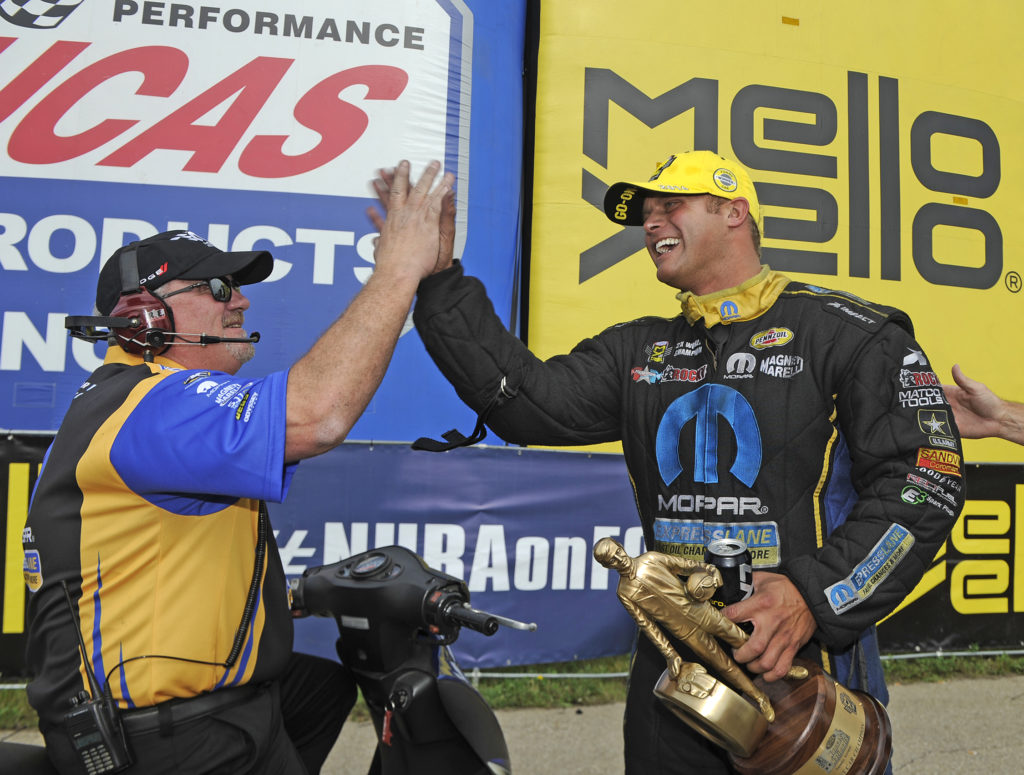 Hagan’s season has been nothing less than phenomenal; he collected four wins, including the prestigious U.S. Nationals at Indy, and is rolling into Vegas fresh off a stellar run in Dallas, where he took home the Wally and a Texas Motorplex cowboy hat.  He owns both ends of the NHRA national record for elapsed time (3.822) and speed (335.57), but stumbled coming out of the gate with a couple of quarterfinal finishes in the early going.

“Well, we’ve had a great race car all Countdown,” replied Hagan.  “We’ve had a great race car all year.  We won the U.S. Nationals and several other races, setting world records.  We started the Countdown with a little bit of bad luck.  The first two races we had, we got outrun by inches.  We just happen to run the quickest guy of the round and we were the second quickest.  If it had been anyone else, we would have gone on to the next round, and who knows what would have happened there.  Sometimes it just plays in your favor and you have to deal with that and grow from it.

“I think we’ve had a little luck come our way; the car is running good and it’s been a strong car the whole Countdown.  It’s not like we backed into anything.  We got a break there or two in Dallas and things went our way.  That’s what you have to do in these Countdowns.  The years I was able to win it, we won 19 rounds and lost three in the whole Countdown.  You have to get hot at that time but if we have the opportunity to win two more races here, we have a legitimate shot at winning the championship.  Is it a long shot? Absolutely. But is it doable? We’ve done crazier things on the track.  We’re out here to put on a show for the fans and I think they are going to get their money’s worth.  It always comes down to the last race in the semi-finals, so to speak, in Pomona, California.  That’s why they pay to see this kind of excitement.” 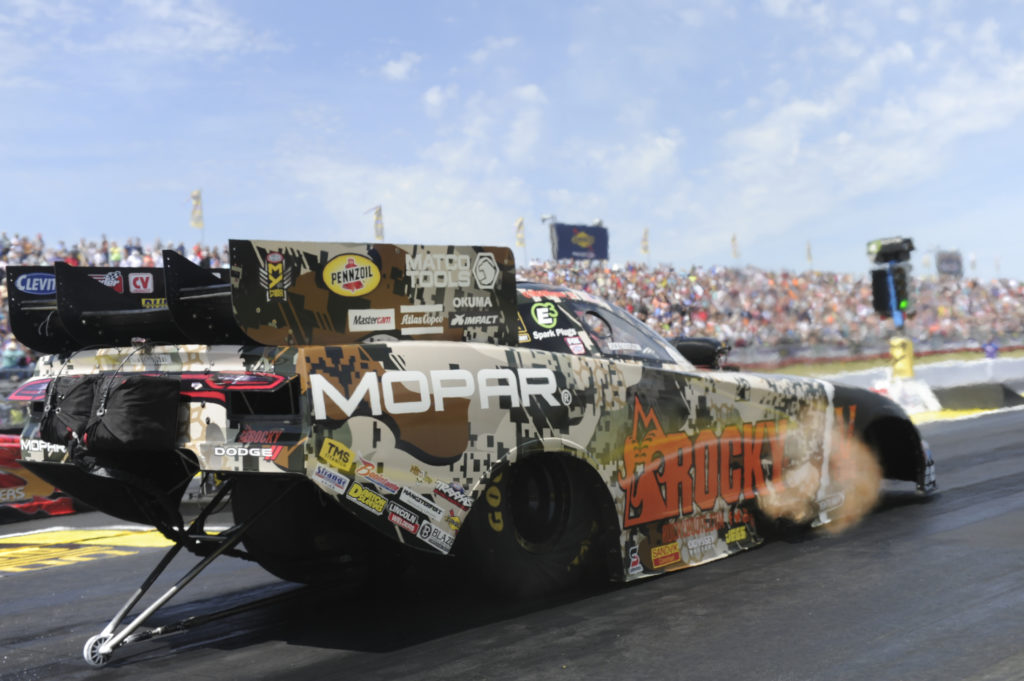 The two major pluses in Hagan’s Mopar/Rocky Boots Dodge camp are having long time crew chief Dickie Venables, a veteran of many nitro years, and his assistant Mike Knudsen.  The calming effect of these two on Hagan is priceless, and it all goes back to just getting the job done.

“The way it worked out, he was able to come on board with us and I’ve been super glad to have him as part of our team,” said Hagan, who hails from Christiansburg, Va.  “He’s been a huge asset to the number of wins that I have been able to have, along with the track records, world records and all that – it’s Dickie Venables.  Having a guy like that in your corner is huge and gives me confidence as a driver.  It puts pressure on you too!  You have a good, fast hot rod and everyone is looking at you like ‘Dude, don’t screw it up.’  It drives you to be better, but Dickie is a methodical guy.  He’s not one of those guys to pound on his chest and say, ‘I’m going to go out here and run as fast as I possibly can just because I can.’  He really is a racer at heart, and he races the racetrack.”

Of course, Hagan’s thoughts and words quickly turn back to the championship and the tough road he has to travel to get into the final mix.  He’s philosophical, but still a realist in what he has to do.

“We’ve got some tough guys to beat,” he said.  “Ron Capps, Tommy Johnson, Jr. and Jack Beckman are in front and right behind us.  All the DSR Funny Cars are where it’s at.  Honestly, they are our closest competition.  I’m not knocking anybody else.  The thing about Don Schumacher cars is every dime he gets from our sponsors goes right back into the racing.  We have the best parts and pieces.  It’s a no-excuse attitude, and you have to learn to adapt to that attitude and produce results.

“It’s the kind of environment where you know you have to rise to the occasion all the time, because you’re putting it all on the line.  That’s why our teammates are so good, our cars are so good, and our crew chiefs are so good, because the funding is there.  We’re settling in our groove, this year is great, and next year ought to be even better.  I still feel a lot of race wins ahead of us, especially the next two races.” 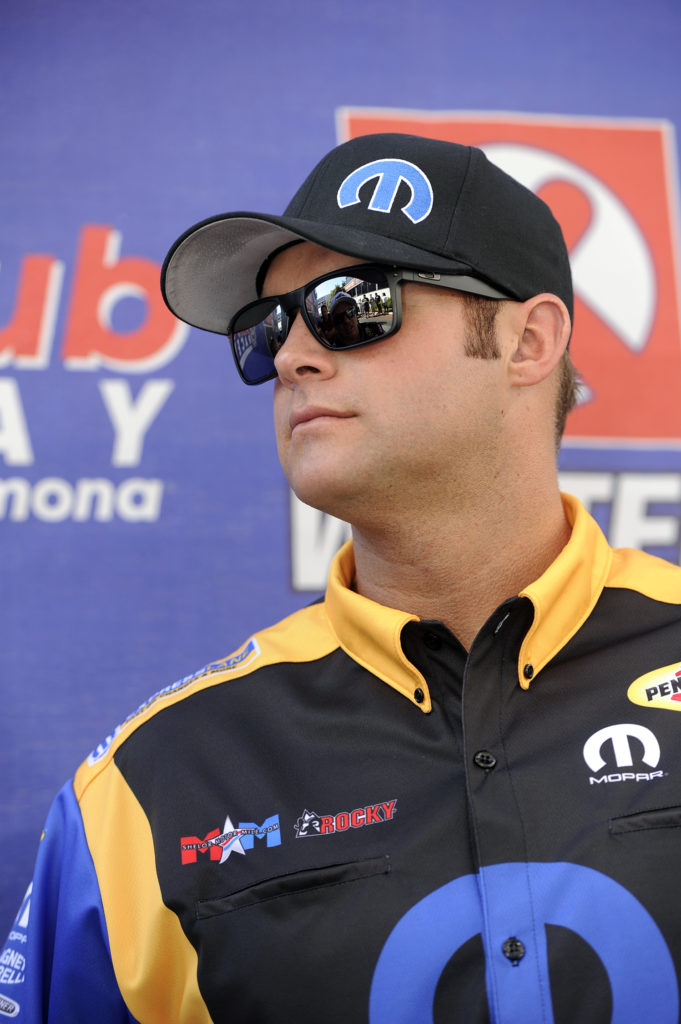 Hagan has to scrape up literally every point he can, and with a 130 total as a maximum this Dodge driver knows he can’t let anything escape in the Toyota Nationals.  It’s a make it or break it race for him and his Mopar team in Las Vegas this weekend.  The emotions are running high for all the teams, but more so for Hagan, as he’ll see his chances either grow or fade away in less than four seconds on Sunday – race day.

“It’s so tough,” said Hagan.  “I’ve seen these races turn into championships by just 1 or 2 points.  When you put it into perspective, it’s gut wrenching.  It’s one of those feelings that if you’re on the backside of it, it rips your heart out and feels like someone stepped on it.  There’s nothing anyone can say or do to make you feel any better, but I’ve been on both ends of that with the Countdown, of winning a couple of championships and losing a couple of championships.  I understand that, and you have to get every point and keep doing what you’ve been doing all year.  Don’t let the pressure get to you.  Honestly, I think it’s the mental side of this game that separates you from being average to a champion – the positive things you have to do to rise to the occasion and be excited about it and not be scared of it, trying to anticipate.  I’ve been fortunate to talk with a few sport psychologists and pick their brains a little bit and share some insight.  It’s the mental side of it, and the pressure from the competition is just as important as the race car running fast and strong.”

Qualifying coverage of the Toyota Nationals starts on Friday evening with a 6 p.m. ET showing of the first of qualifying round on FOX Sports 1.  Complete qualifying results will air on Saturday night at 11 p.m. on FS1, with the finals airing live starting at 4 p.m. ET on Sunday, Oct. 30 on FS1. 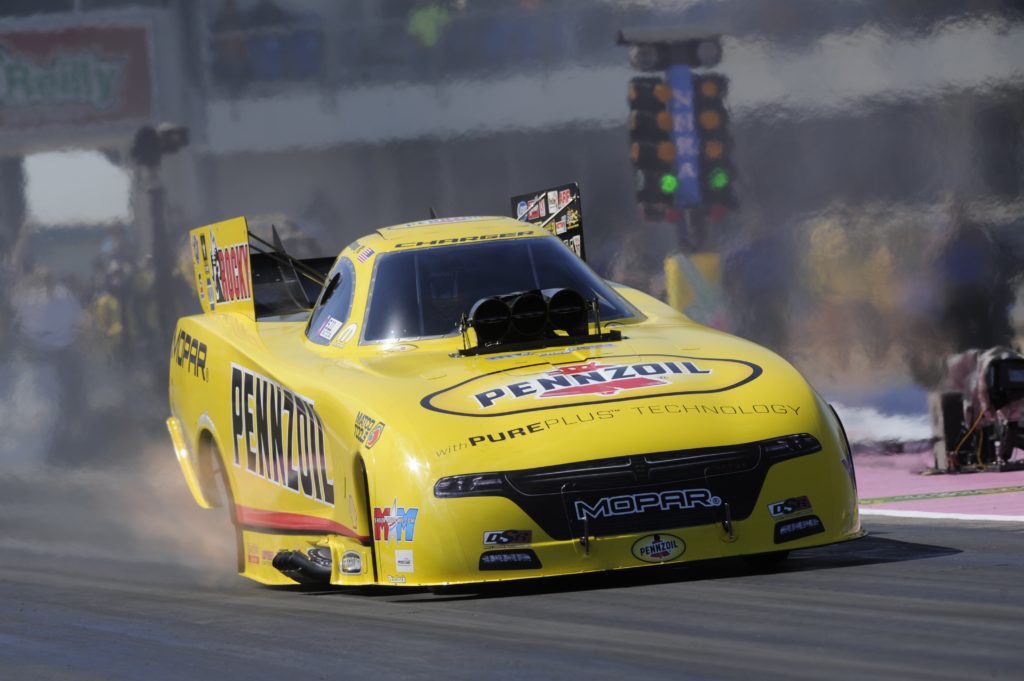