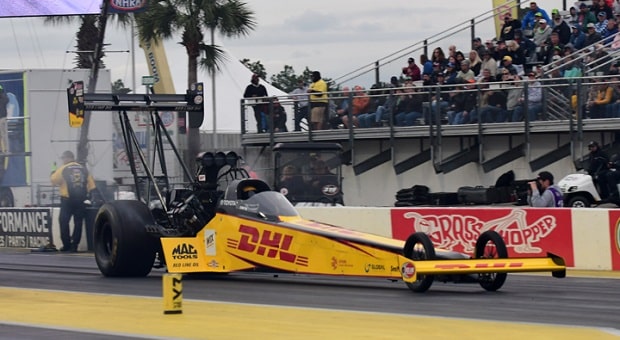 There were plenty of surprises at this year’s 50th annual Amalie Motor Oil NHRA Gatornationals on the Gainesville Raceway dragstrip. The temps went from blisteringly hot to cold and wet by the time the festivities had run their course. The action on the racetrack was enviable, and the crashes were the stuff of highlight reels. 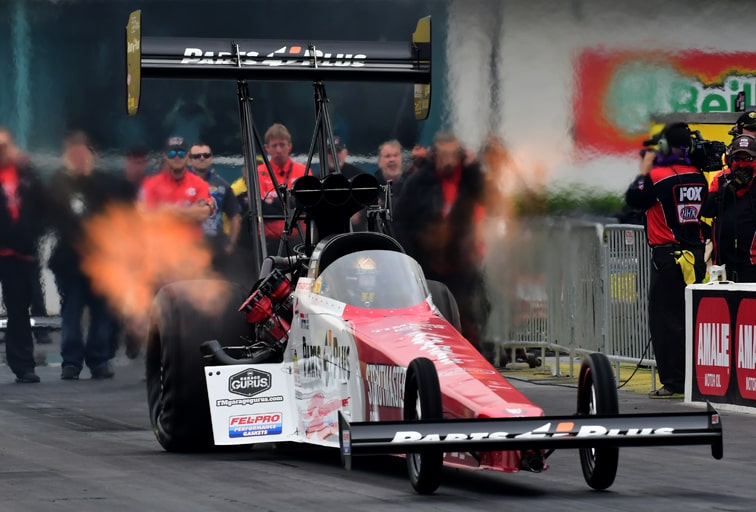 Through it all the competition was hot and heavy and faces in the Winners Circle were familiar. Richie Crampton took his second straight Top Fuel Wally for DHL and Kalitta Motorsports, a feel-good story that prompted a #KalittaStrong mosh pit. That the Aussie won over Clay Millican was unexpected; Clay’s Stringer Performance team made many changes in the off-season, bringing back tuner Mike Kloeber and releasing David Grubnic from crew chief duties. They looked like mid-fielders in the first two contests but came on strong in Gainesville. 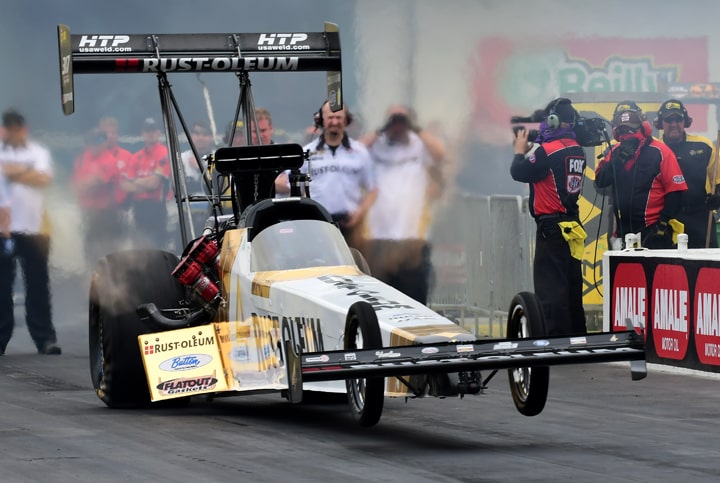 Another unexpected result in Top Fuel was both the appearance and performance of part-timer TJ Zizzo and his golden-hued Rustoleum dragster. Zizzo qualified ninth, beat Scott Palmer in the first round, took a hole-shot victory over No. 1 qualifier Brittany Force in the second round and then fell in a tight contest to overall winner Crampton in the semifinals. Zizzo only races when he can afford to make the trip, usually staying closer to his Chicago-area home. He was over the moon with these results.

Robert Hight showed his Pomona Funny Car victory was no fluke after earning No. 1 qualifier in his John Force Racing Chevrolet Camaro SS. Hight’s final round 3.867-second pass over independent Tim Wilkerson was anticlimactic, but Wilk’s appearance in that final round wasn’t all that unexpected after the Illinois racer qualified second. He had solid passes all Sunday afternoon, beating Dave Richards, Cruz Pedregon and Jack Beckman until the one that mattered, where he had tire smoke right at the hit. 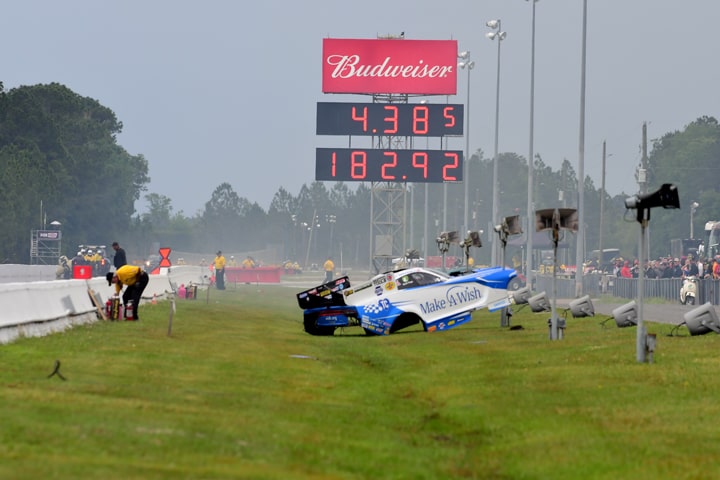 Tommy Johnson Jr provided yet another bit of excitement when he blew the body off his Don Schumacher Racing Make-a-Wish Dodge Hellcat SRT. It landed by the side of the track, thankfully. The weekend wasn’t the best for DSR: Antron Brown’s Matco dragster was gone after a single pass, while Leah Pritchett made it to the quarterfinals in her bright Mopar rail. Her defense in Factory Stock Showdown ended after a single round from sixth qualifier. The four-driver DSR Funny Car team had three cars out of the running in the second round (Ron Capps, Matt Hagan and Johnson Jr., who was racing teammate Jack Beckman).

One thrill in Pro Stock this past weekend was seeing the throwback yellow and black colors on Jeg Coughlin Jr’s Elite Motorsports Chevy Camaro. There were similar liveries celebrating Jeg’s family patriarch on Mike Coughlin’s Top Dragster and Troy Coughlin Jr.’s Top Alcohol Dragster. The livery didn’t take Coughlin’s Camaro too far as he fell in the first round to Kenny Delco, who tested the tree (successfully in rounds 1 and 2) at Bradenton earlier in the week. Another cool livery was Alex Laughlin’s Havoline Camaro, also from Elite Motorsports. Laughlin broke in the PS finals, handing the win to Pomona victor Bo Butner of KB Racing. 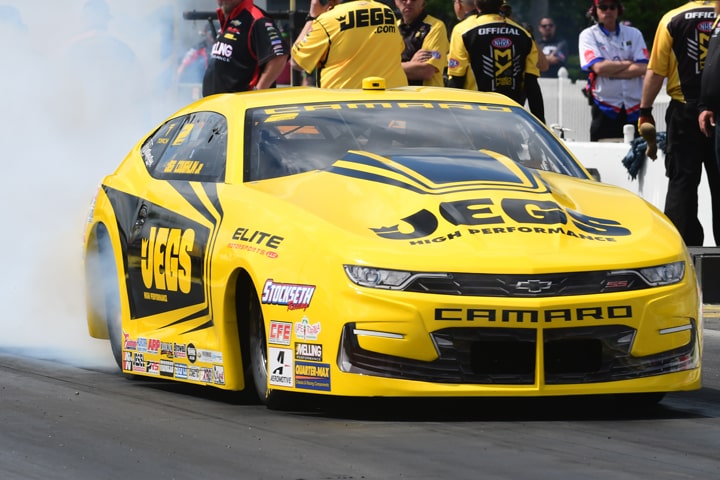 Pro Stock Motorcycle’s season-starting finals might have looked boring to the casual fan, but it was pretty darn exciting for Andrew Hines when he beat Vance & Hines Harley-Davidson Screamin’ Eagle teammate Eddie Krawiec. Hines had some early qualifying issues but still emerged as No. 1 qualifier, beating Cory Reed’s EBR, a fouling Jerry Savoie (Suzuki) and Hector Arana Jr’s EBR to make it to the finals. His win was his first here in Gainesville since 2004 – which was his first PSM victory. Drew was understandably stoked after the win light.

If you were hoping to hear about LE Tonglet, the former champion WAR Racing Suzuki rider, the Louisiana fireman is a brand new father and taking time off to get to know his son. Karen Stoffer moved over to ride a WAR Suzuki while Jianna Salinas is now working with Jimmy Underdahl’s Suzuki team. Underdahl qualified seventh but fell to Krawiec in the second round. The fastest motorcycle on the grounds was reigning champ Matt Smith’s EBR, who also had a second round result. 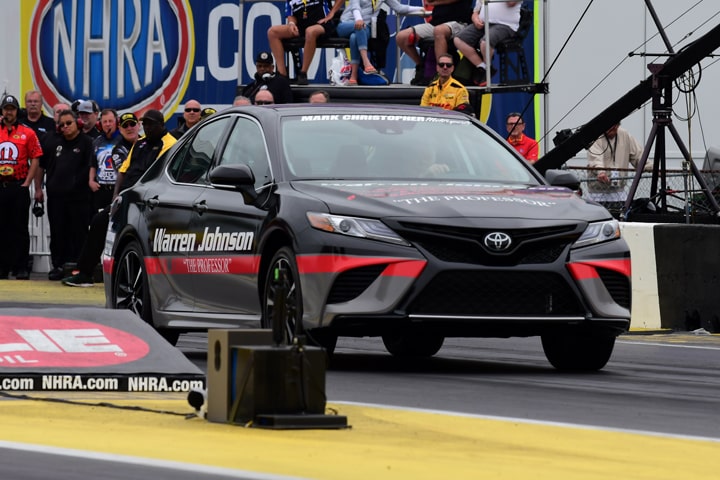 In the Unfinished Business exhibitions all three days, eight legendary racers were driving purportedly stock and identical Toyota Camry sedans (Toyota races Camrys in Funny Car; they thought it was a good promotion). Shirley Muldowney broke a tie with Don Garlits when her pink car beat his white one in the first round. Others going to the second round were Joe Amato, Warren Johnson and Ed “Ace” McCulloch. 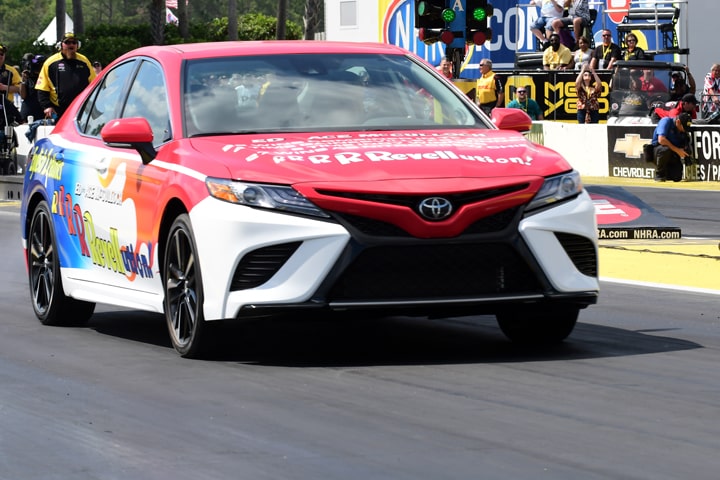 The finals were between WJ and Ace and Johnson, the Pro Stock master took the win light, even after McCulloch asked that they trade cars. Johnson’s margins of victory in two of three rounds were pretty large and, even though the car handlers had not allowed anyone to even look under the hood, Ace thought The Professor might have a better car. He may well have, because they did swap cars on Sunday afternoon and McCulloch pulled the win light that time around.

The Unfinished Business exhibitions were just part of the celebratory feel to this well-attended event, held on a newly finished concrete surface. NHRA’s Safety Safari kept the entire competition humming, working overtime to make sure the surface was in exemplary racing condition. Although the proceedings ended at twilight rather than the expected 4PM as per the schedule, fans stuck around from morning to night to watch current, former – and future – heroes perform on the dragstrip. It was an event they’ll not easily forget.