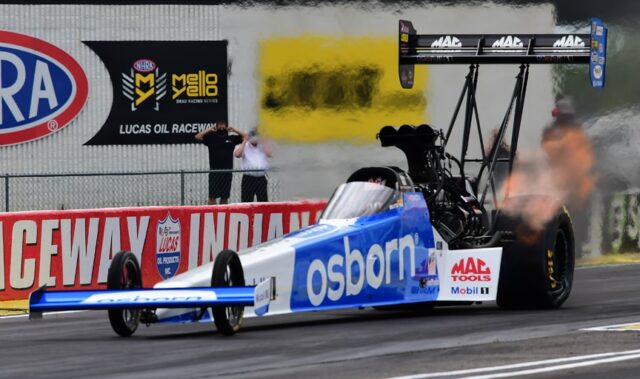 NHRA is emulating Formula One in holding two events a weekend apart at the same track. While F1 started its season in Austria, the Mello Yello Drag Racing Series is continuing its 2020 campaign that went 140 days between events in late February to mid-July. It was a long wait, but definitely worth it for fans of the sport and, of course, for competitors.

This weekend, as NHRA contests the Lucas Oil NHRA Summernationals on the historic Lucas Oil Raceway dragstrip, only Top Fuel and Funny Car will be competing. Both Pro Stock car and motorcycle categories are off this weekend.

There are 20 Top Fuel entries for the Lucas Oil Summernationals this weekend, including all who showed up for the last race and adding Joe Morrison, the Flemington, NJ racer who is making his dragster debut with the Leverich Family TF entry. The former nostalgia drag racer was licensed last weekend at Maple Grove Raceway.

This race marks the second – and maybe final – opportunity to see the most successful dragster driver in NHRA history, Tony Schumacher and to see Cory McClenathan as he attempts to earn his 35th victory, which would tie him with Don Garlits. Neither driver made it past the first round in NHRA’s Return to Racing; they’re both hungry to show their skills, given this second opportunity.

Now that he’s joined Schumacher in the “700 Club”, having earned 700 round wins, points leader Doug Kalitta is aiming to change his runner-up status, one he’s held since Phoenix in February. This weekend, he’ll be wearing blue and white colors for sponsor Osborn, as Kalitta did during last Friday’s test day. In addition to surface treatment purveyor Osborn, Kalitta has support from Mobil 1, who have been providing the Kalitta Motorsports team with bespoke lubricants. 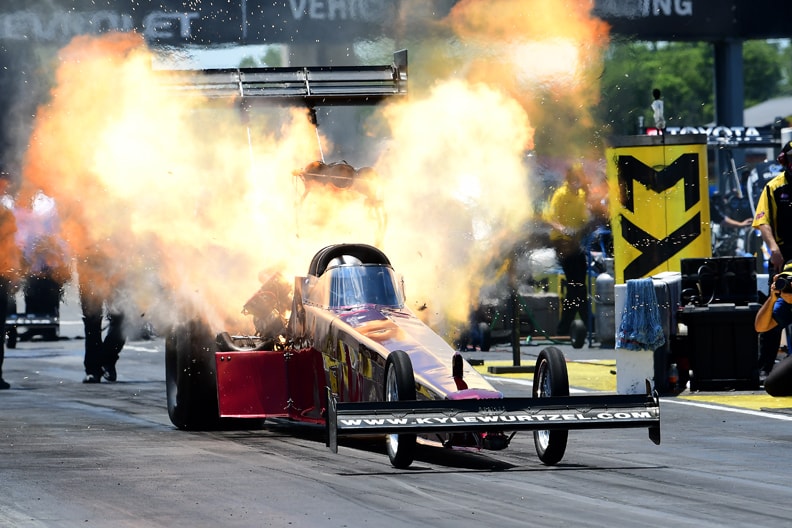 Kyle Wurtzel, who had a big boom in Saturday’s initial qualifying session at Lucas Oil Raceway July 11th, is looking forward to returning to action this week after repairs. Wurtzel’s Agan chassis and his Alan Johnson engine sustained a lot of damage in that conflagration, but he is on the entry list again this week. So is TJ Zizzo, whose beautiful Rustoleum dragster went to the quarterfinals last week, only to be edged by eventual winner Billy Torrence. 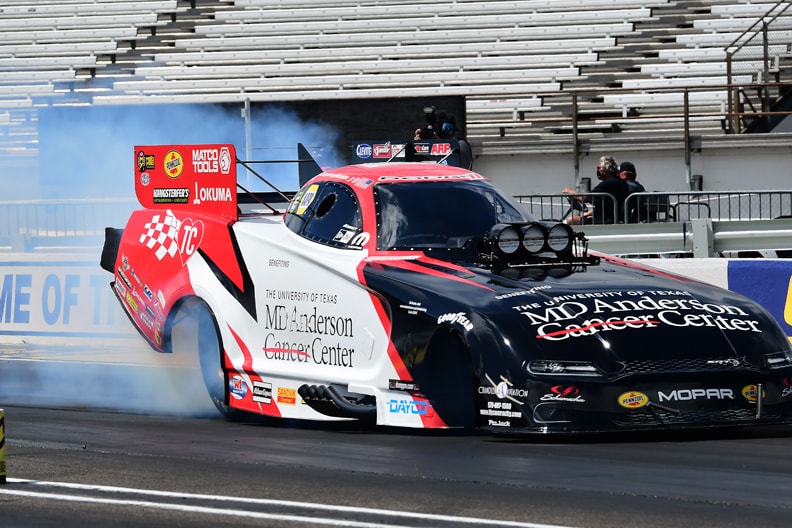 Funny Car has 18 entries, but none of them come from the John Force Racing team. That shouldn’t bother any of those on-site, as it’s better opportunities for them to try and catch the dynamic trio from Don Schumacher Racing: Jack Beckman, Tommy Johnson Jr. and Matt Hagan, who have corralled the points lead for themselves in their Dodge Charger SRT Hellcat race cars. 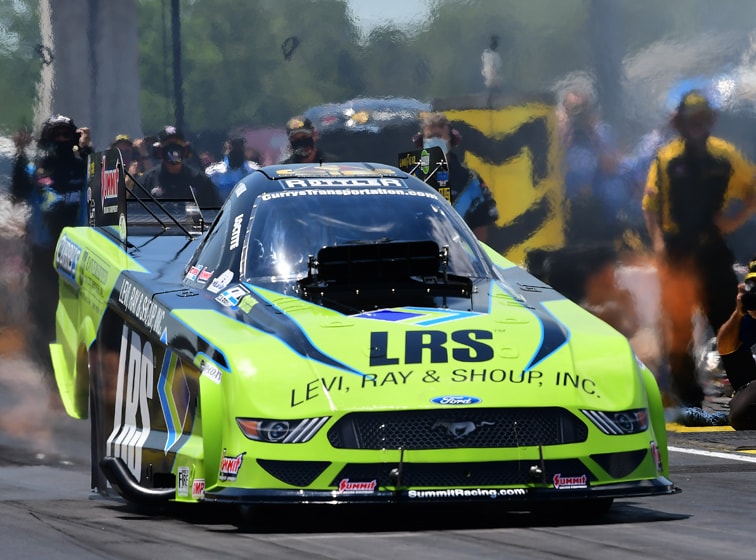 Even so, they’re hounded by Tim Wilkerson, who made an excellent, semifinal appearance last weekend with new livery for his Ford Mustang. And another Ford Mustang driver will be back on the track, as Bob Tasca III has been okayed by his medical team to return to competition following his bout with the novel coronavirus, COVID-19. Tasca, despite his absence last weekend, retains eighth-place points and is hankering to get back in action, after watching sub Jonnie Lindberg take Tasca’s Mike Neff/Jon Shaffer-tuned Mustang to the quarterfinals.

Chad Green will be driving the Ford Mustang that Wilkerson’s son Daniel drove last weekend while newcomer Alex Miladinovich is returning for his second straight race in a Toyota Camry, along with Mike McIntire JR in his Camry, while Dale Creasy Jr is back in the 2014 Dodge Stratus he drove last week. Look for Terry Haddock in his 2018 Mustang and the 2019 Jim Head Racing Mustang piloted by two-time Top Fuel winner Blake Alexander. Altogether, it’s a healthy entry for the flopper set.

There’s a monstrous 23-car entry for Pro Mod, who begin their season at this race, delayed from the original season-starter in Gainesville last March. Stevie “Fast” Jackson should be quick out of the box as he begins his attempt for two championships in a row, driving his 2018 Chevrolet Camaro, but he’s got a pile of competitors – and former class champions – looking to steal season-long honors away from the Georgian.

Only eight Top Fuel Harley competitors will be in the house, but 25 Factory Stock Showdown cars are expected for this race, with the Lucas Oil NHRA Summernationals starting their seasons after the long wait from postponed Gainesville. Drew Skillman will attempt to earn a second straight title in his Mustang, but he’ll have to put up with the likes of Mark Pawuk and Leah Pruett (also a double-up with Top Fuel) and Pro Stock standout Aaron Stanfield.

This weekend looks to be a hot one, both on and off the track. While the nitro teams last ran in cooler temps before returning to Lucas Oil Raceway last weekend to compete in the heat, the other classes haven’t had to change their settings to accommodate the weather. It’s an all-new season for Pro Mod, Top Fuel Harley and Factory Stock Showdown and will be interesting to see who’s got the goods.

1 Comment on Lucas Oil Summernationals On Tap this Weekend