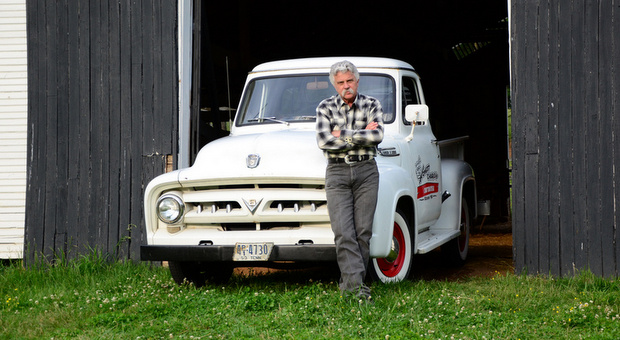 Follow antique car expert Corky Coker as he scours the highways, back roads and small towns of America, looking for hidden treasures on his new television show, Backroad Gold, which debuts February 5th, 2014 on the Travel Channel.

Corky will be wheeling and dealing his way to antique cars, motorcycles, trucks, gas pumps and “anything that’s cool.”

Check out the trailer for Backroad Gold:

Here’s some behind-the-scenes commentary from one of the stars of the show (and Corky’s daughter), Casey Cunningham:

Filming the show was so much fun. Working with my husband and my father is something I am very much used to, so to be filmed doing it didn’t change much. I really enjoyed getting to work with such a fantastic film crew. I always looked forward to the times they came into town.

As petty as it sounds, having to get up earlier than normal to get “camera ready” wasn’t my favorite, haha. I work in a hotrod shop, plus, I am not the girliest of girls, so for me to have to straighten my hair and put make-up on at 5am before I got the kids up for school definitely made me appreciate all the full time working moms out there that have to look “presentable” all the time!

Corky and Greg brought back a bunch of fantastic cars and motorcycles, but there’s one that really stood out to me. I’m not saying which, so you’ll have to watch! Also, one of my favorite random finds from the show? A goat treadmill. That exists? Well, yes, apparently it does, and did Corky purchase it? You’ll have to watch to see.