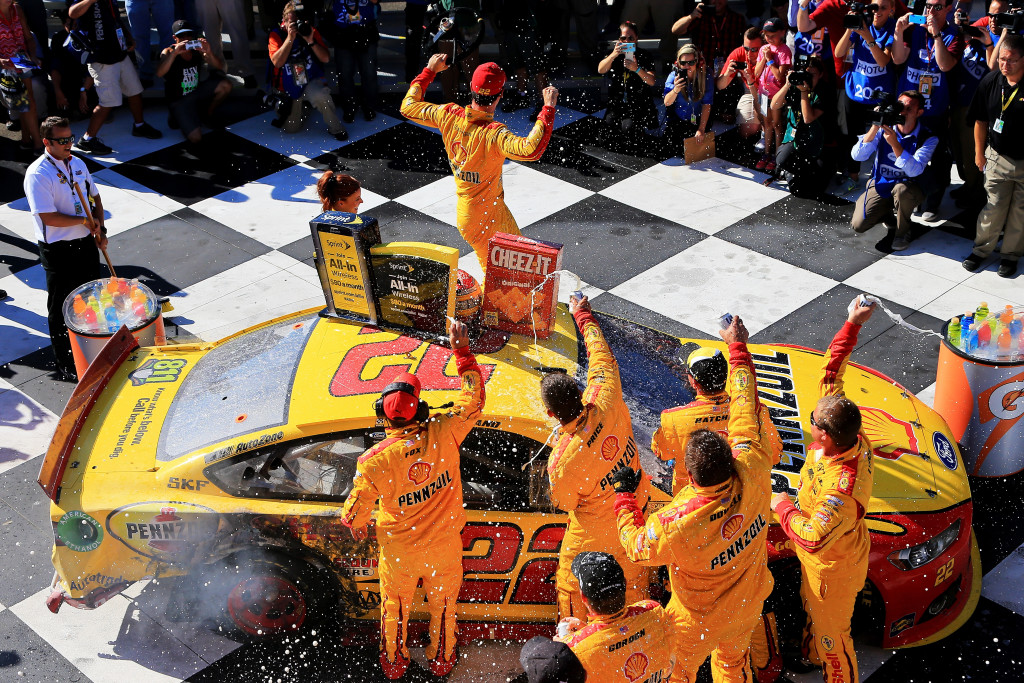 After running out of fuel last weekend at Pocono, Joey Logano turned the tables on Kevin Harvick, running him out of gas and beating him two turns from the finish line in Sunday’s Cheez-it 355K NASCAR Sprint Cup event, sweeping the weekend at Watkins Glen International.

Over the last 30-lap green flag run to the finish, Logano kept Harvick’s mirror full of his Pennzoil Ford Fusion.  Just when it looked like Harvick would sail away with the win, his car sputtered in turn six, giving Logano the chance he needed to go around him and race to the finish line.  Kyle Busch nipped Harvick at the line for second, thus relegating him to a disappointing third place finish.  It was the only lap Logano led all day, but it was his most important.

“I’m still just trying to catch my breath,” Logano said, after literally catching his car on fire doing celebratory burnouts on the front stretch.  “I was really excited after that one.  I was running down Harvick there for a little bit, and once I got close to him, he started to pick up his pace a little bit, which was good, because I needed him to run out of gas.

“I started to catch him a little bit, and I drove into [turn] one too hard [on the final lap] and started to wheel hop.  I just about lost it, and at that point, you just hope he runs out of gas, which he did in the last corner.  It makes up for last week.  We lost the race last week the same way, so it makes up for it to get it this week.” 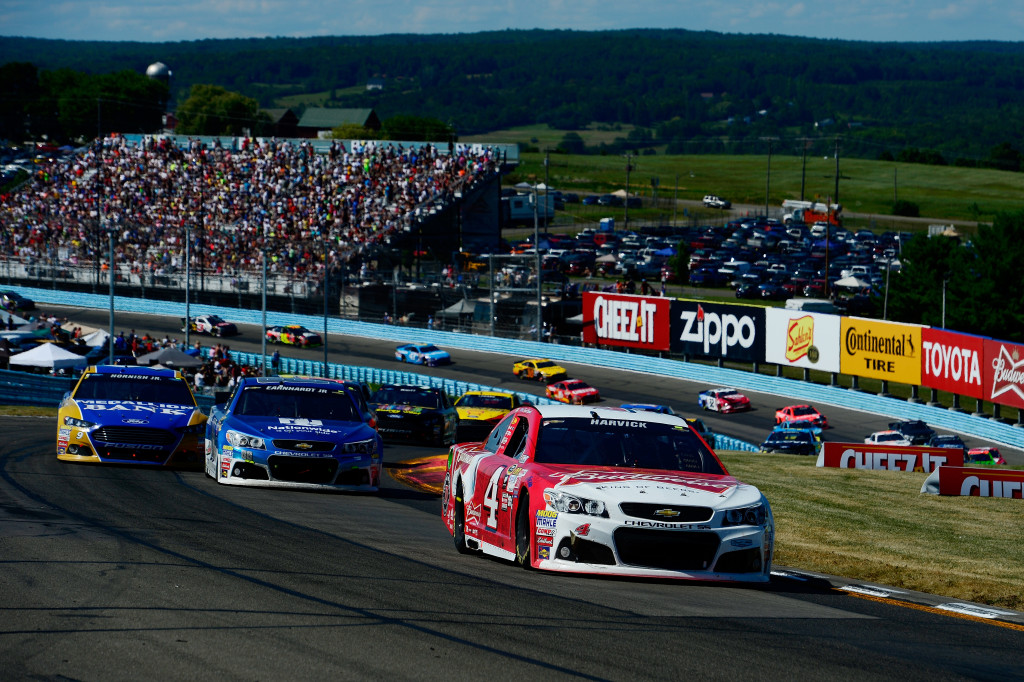 Logano also won Saturday’s XFinity race, his first road course race win in the division, and took the Cup event, as well, sweeping the weekend in the Finger-Lakes region and becoming the first NASCAR driver ever to do it.  After winning the Daytona 500, it was his second of the 2015 season and 10th of his career.

Kyle Busch had a reason to be happy with his runner-up finish.  It finally brought him into the top 30 in the driver’s standings with four races to go to Richmond after returning from an 11-race absence after his Daytona injuries.  Like Logano, Busch ran out of fuel on the white flag lap last weekend in Pocono, refocusing his purpose and strategy of finishing and didn’t push to catch Logano towards the finish.

“I think that was some of [crew chief] Adam [Stevens]’s worry, too” said Busch, who, like Logano, had pitted for fuel under caution on lap 58 of 90.  “We couldn’t afford running out of gas like we did last week and taking home an even worse finish this week because of how many cars finish on the lead lap typically at a road course.

“We’d be back in the 30s somewhere.  I’m sure that was weighing on Adam’s mind on being able to save gas and make it to the end, just playing it a little bit more cautious, which is fine.  I’m with Adam 100 percent of the way all the time.” 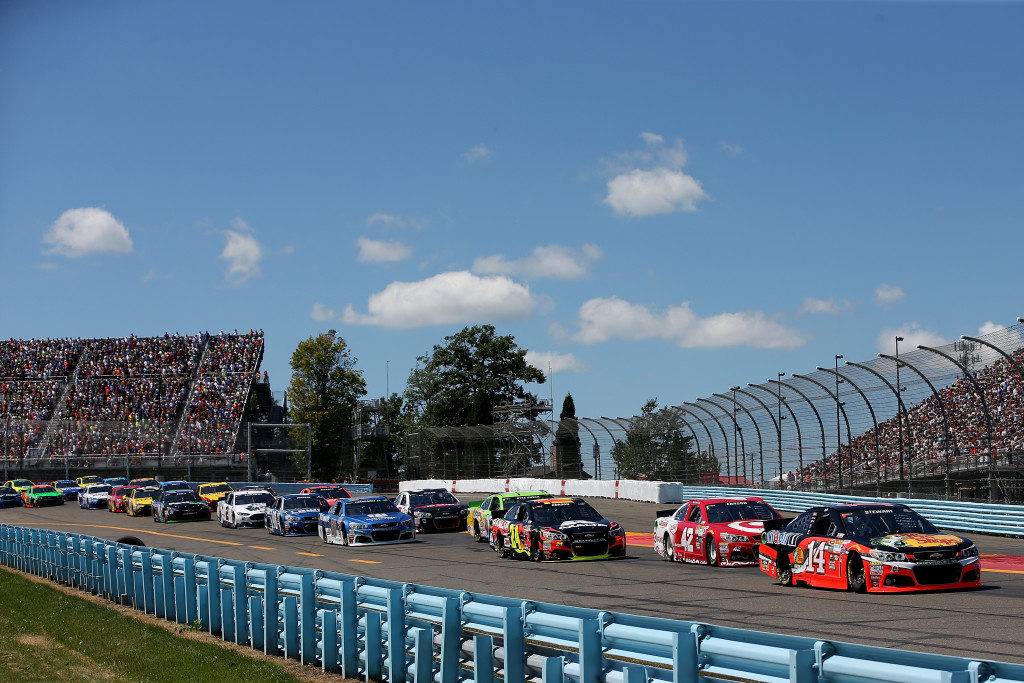 Kyle Busch has now jumped to the No. 2 spot in the lineup of 16 for a chance at the Sprint Cup Chase for the Championship.

Jeff Gordon finished 41st in his last Watkins Glen race, dropping two spots to the 12th in the points standings, having brake problems early in the race.

The NASCAR Sprint Cup series moves next to the Michigan International Speedway for the running of the Pure Michigan 400 next Sunday, August 16, on NBCSN with a starting time of 2 p.m. EDT. 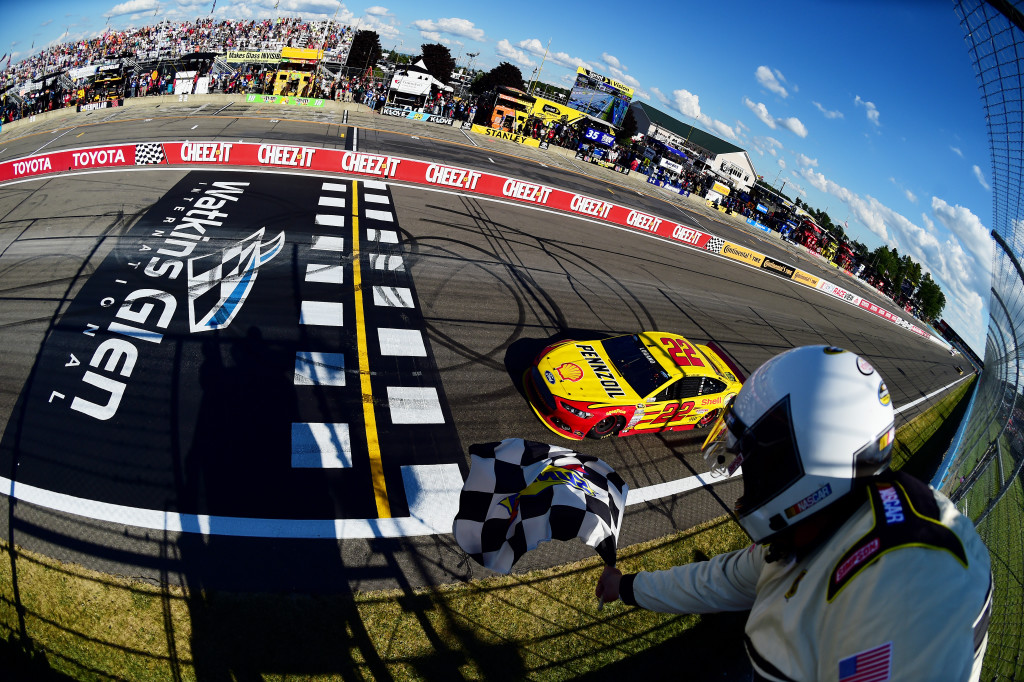