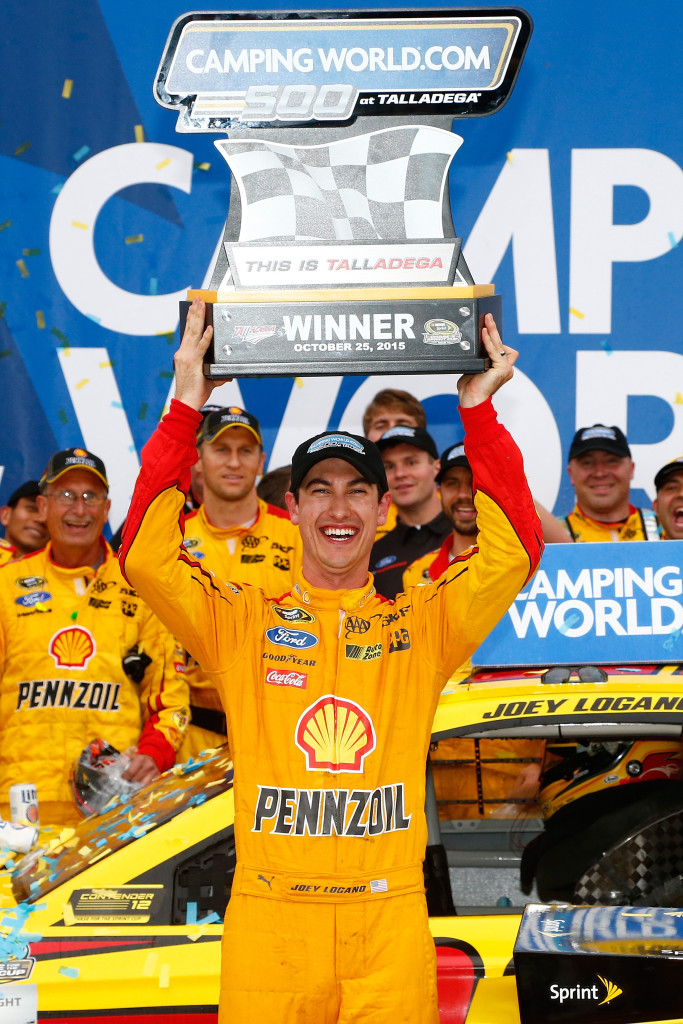 Joey Logano pulled off a miraculous NASCAR ‘hat trick’, winning the CampingWorld.com 500, his third race in a row, sweeping the entire Contender Round of the Sprint Cup Chase and denying fan favorite, Dale Earnhardt, Jr., entry into the Eliminator 8 Round by just mere inches.

The outcome had NASCAR officials closely studying the computer time clocks, reviewing television photos and the finish line camera gathering all the information on the aggressive Talladega SuperSpeedway to determine the final result, announcing Logano, first, Earnhardt, second – dashing his championship aspirations for this year.

The victory was Logano’s series-best sixth of the season, his first at Talladega and the 14th of his career.

“I had a good start, and then the 24 was pushing me and the plan worked perfectly but the inside lane started pulling back up,” a happy Logano said in talking about the final restart.  “I saw the [caution] lights come on when I was still in the lead, and I thought we had it. 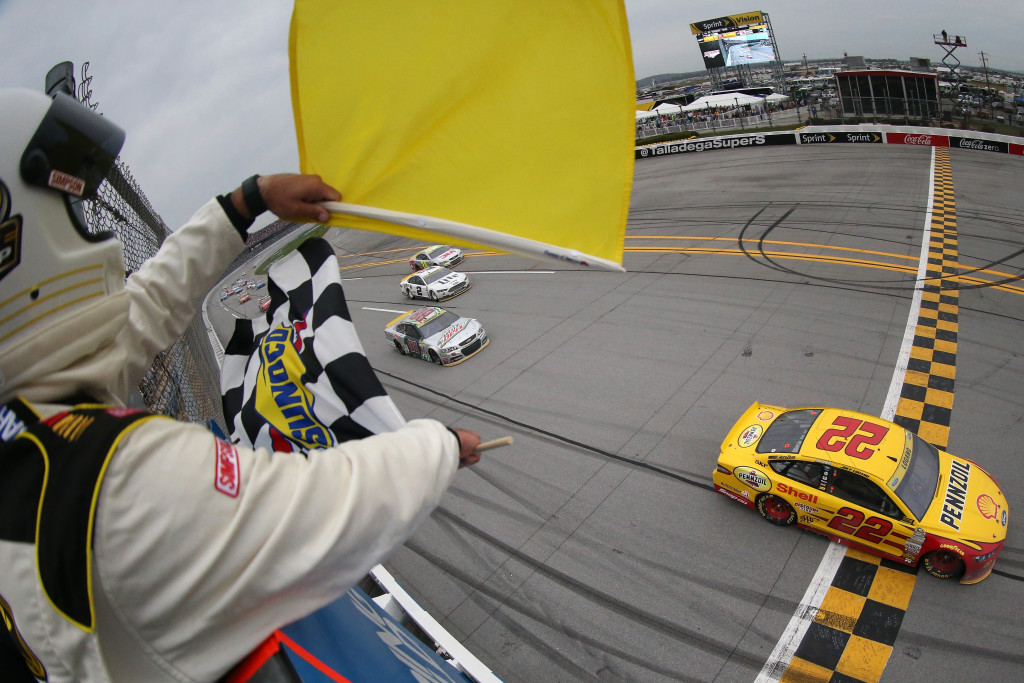 “It’s all about how the timing loops are and the camera makes sure that is what happened.  It’s such a crazy race.  There were such long green flag runs.  You never see that.  To pull it into victory lane here at Talladega is so cool.”

It was a bizarre finish, to say the least, which started with a late race yellow flag caused by Jamie McMurray blowing his engine down the backstretch six laps from the finish.  Bringing the field back together shattered Greg Biffle’s plight of attempting to coast his way to a win, leading by 38 seconds over the field after trying to stretch his fuel staying out before the yellow did occur.  The extension of laps to 196, eight more than expected, forced Biffle to pit, turning the lead back over the fast pack of cars headed by Logano and Earnhardt, Jr.

As the pace car peeled off the track signifying overtime, leader Logano raced to the anticipated green with Dale, Jr. to his inside, when the cars of Martin Truex, Jr., Jimmie Johnson, and Kyle Larson collided before the leaders reached the line and no green was shown, frustrating all the competitors.  NASCAR, after declaring early in the weekend that any Green-White-Checkered finish would get only one attempt, puzzled drivers and quickly spotters and crew chiefs were told to relay to their drivers that NASCAR was going to try it again since no green flag had previously unfurled. 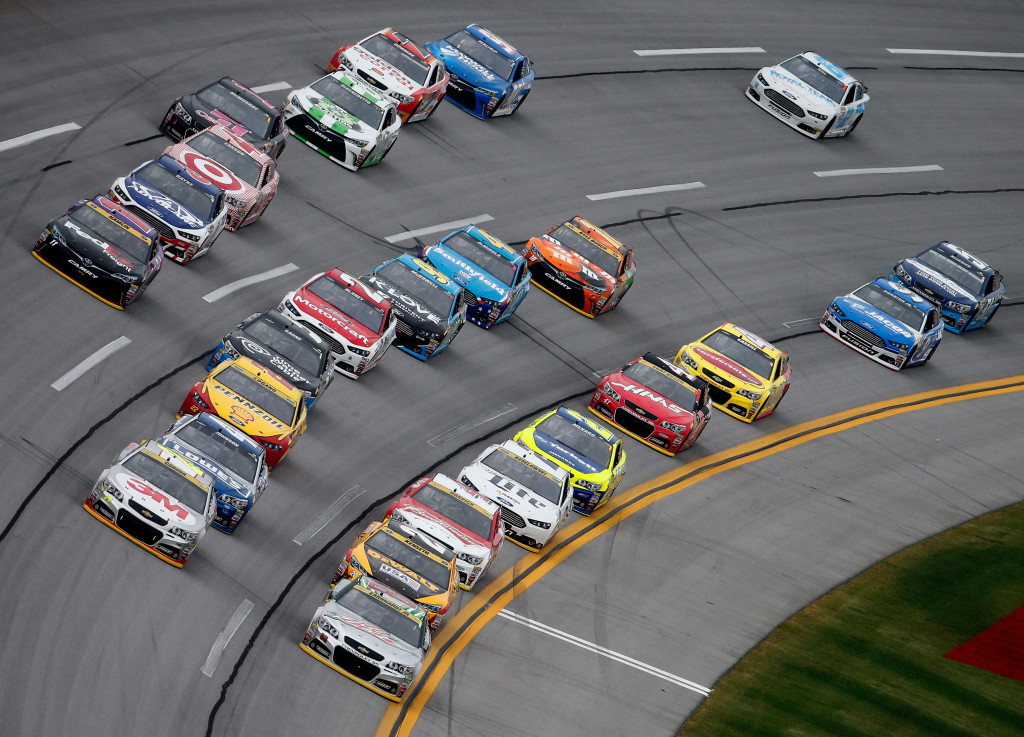 Again, the field headed by Logano and Earnhardt approached the starting line, this time crossing it when driver Kevin Harvick moved up from the back of the field, clipping Trevor Bayne on the restart.  That action lead to creating a pinball effect, jostling traffic in a chaotic flurry and taking out the cars of Matt Kenseth, Sam Hornish, Jr., David Gilliland, Danica Patrick, and Tony Stewart to name just a few before reaching the starting line ending the race.

NASCAR froze the finish, slowly determining positions one by one with the final rundown being officially announced almost an hour later.  With so much in the balance of the four drivers falling out of the Chase, NASCAR had more than the order to review after much questionable speculation arose about Harvick’s driving tactics at the end.

Numerous teams quickly pointed the finger at the No. 4 Harvick, who was having engine problems and difficulties mustering speed, named as an instigator of causing the accident on the last restart when he moved up clipping Bayne.

NASCAR Vice-Chairman, Mike Helton, and his team of competition officials reviewed radio communications and discussed it with the Stewart-Haas Budweiser team directly.

“Some teams questioned what the 4 car did on the restarts,” said Helton, discussing Harvick’s questionable driving at the end drawing the ire of other teams.  “We went back and walked through it with them.  Procedurally from NASCAR, we didn’t see anything that is suspect, so far.  We’re comfortable with the way we handled everything.” 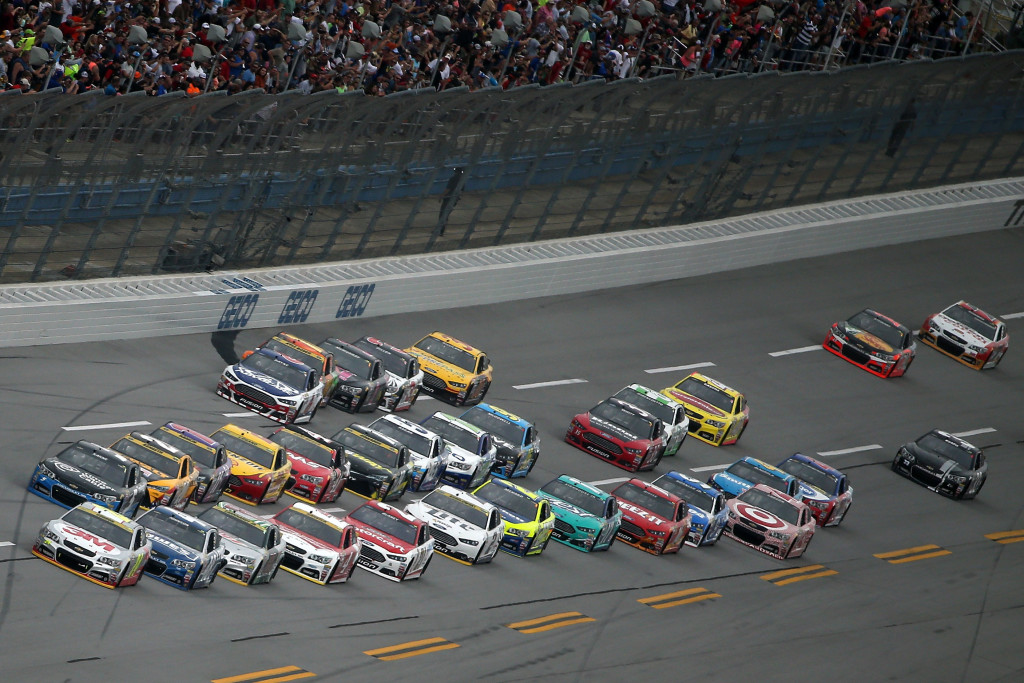 The order set came out concluding that Carl Edwards (fifth), Jeff Gordon (third), Kurt Busch (10th), Brad Keselowski (fourth), Martin Truex Jr. (seventh), Harvick (15th) and Kyle Busch (11th) are advancing to the Eliminator Round of the Chase.  Now the field resets to 4,000 points across the board with Martinsville, Texas, and Phoenix coming up around the corner.

Dale Jr., Matt Kenseth, last year’s runner-up, Ryan Newman, and Denny Hamlin, the Chicago winner, had their flame extinguished looking onto 2016 from this point forward after being eliminated in the Chase.

“Everybody is going to ask me a hundred times how I feel about the green-white-checkered rule now,” Earnhardt said, in such a close call, who led the most for six times for 61 laps.  “I feel good about it.  It was a good safe call.  The race ended per the rules, and I’m totally okay with that.

“They decided officially who won the race, and Joey won it.  He has had an awesome round.  Unbelievable, really.  We did everything we could today.  Almost perfect, [we] tried really hard.” 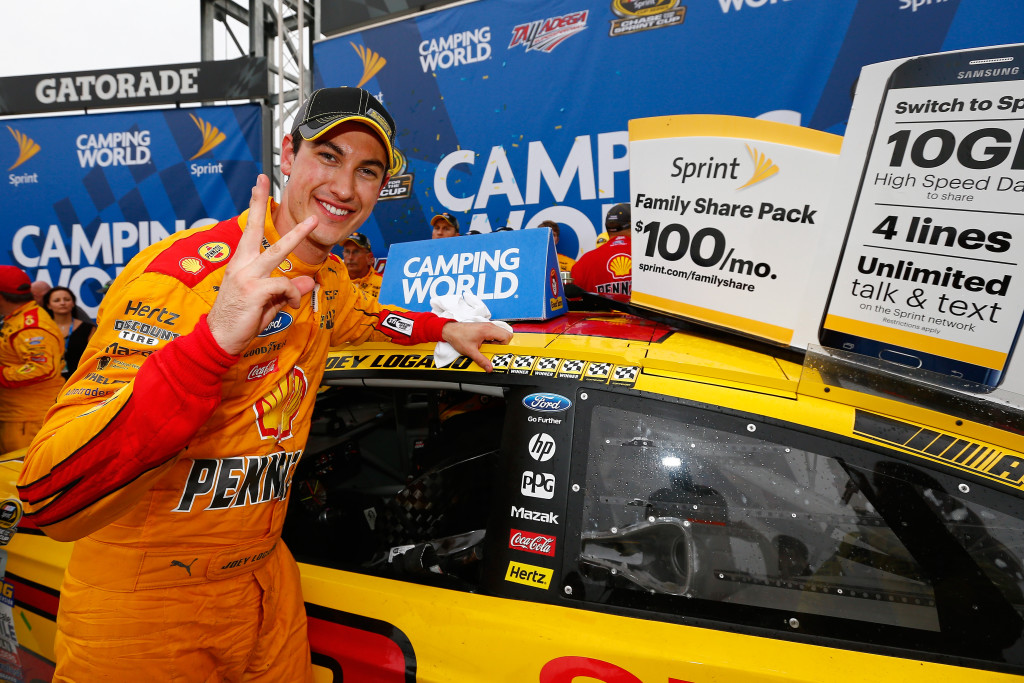 Rounding out the top five were Jeff Gordon, Brad Keselowski, and Carl Edwards.

The average speed of the CampingWorld.com 500 was 167.311 mph after only three caution flags for 18 laps.  There were 30 lead changes among 18 drivers.

The first round of the Sprint Cup Chase Eliminator 8 starts next weekend at the Martinsville Speedway for the running of the Goody’s Headache Relief Shot 500 on Sunday, November 1, starting at 12:30 p.m. EST on NBCSN.