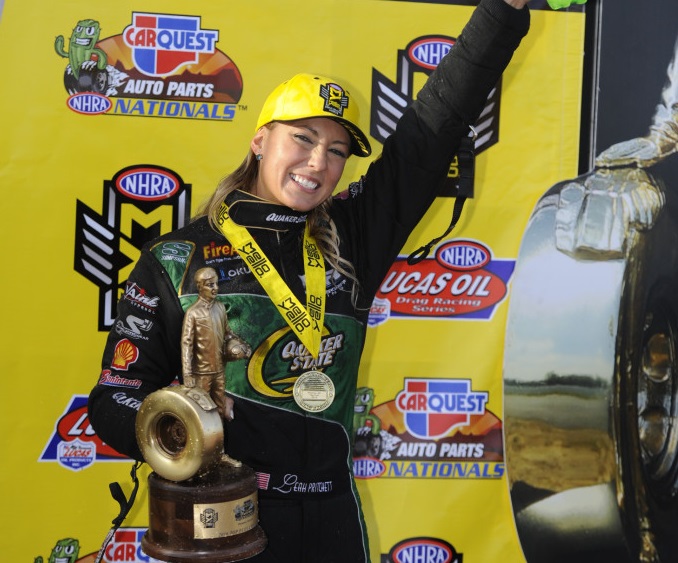 It’s been a big, if rocky, year for NHRA Top Fuel drag racer Leah Pritchett. Dote Racing, Pritchett’s 2015 organization, announced it was taking 2016 off a few months before the start of the season, leaving her without a ride. After then coming on full time with Bob Vandergriff Racing (BVR) for the 2016 season, Pritchett took home her first Top Fuel WALLY in Phoenix and then continued to prove that she could run with the big dogs of drag racing.

A few weeks ago, BVR announced that Vandergriff was retiring his race team, effective immediately.  Pritchett was once again left hanging out to dry.  The talented racer is no stranger to hustle, but her efforts to run a full season, thus getting the necessary experience and exposure to build a solid career continued to hit a brick wall.

Pritchett is getting a chance to continue the chase this coming weekend at the Four-Wide Nationals at the zMAx Dragway in Charlotte, NC this weekend thanks to sponsor FireAde 2000, who signed on as multi-race sponsors of the Nitro Ninja dragster when Pritchett was with BVR and will sponsor her this weekend, , with associate backing from Boninfante Friction and Aerodine Composites Group.

According to the NHRA:

Pritchett is grateful for the opportunity to race this weekend in Charlotte and not let down her many fans who have supported her at a track that has delivered multiple Wallys in Pro Mod and numerous round-wins in Top Fuel.

“Beyond working alongside and being close friends with the Laganas, I feel fortunate to bring the proper resources to their operation to compete at this event,” she said. “Experiencing this portion of my journey with people I know, respect, and trust makes this quick turnaround of a time that much more rewarding. I will even have a couple of my former crewmembers from my BVR dragster driving down and working on the car with me this weekend.”

FireAde’s sponsorship this weekend should give Pritchett a chance to both stay relevant in the Mello Yello Top Fuel championship points standings, and give her time to secure additional sponsorship.

We wish her the best of luck.