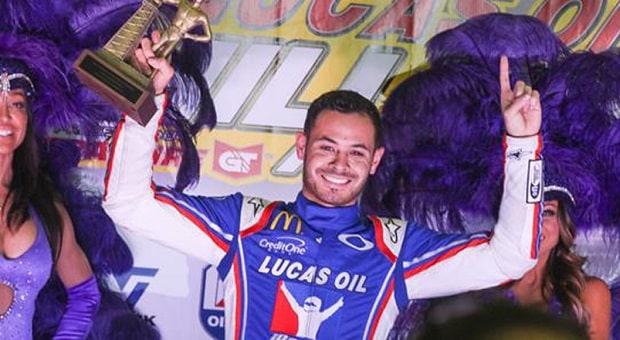 Kyle Larson emerged from USAC midget racing to earn continuing accolades for his prowess in the NASCAR Cup Series ranks, driving for Chip Ganassi Racing. But he never forgot his roots, and for the past months since the Cup series finale at Homestead, the Californian has been re-honing his capabilities to wheel a self-owned midget, winning races like the Turkey Night Grand Prix at Ventura Raceway and other prominent, nationwide open-wheel contests.

It was all, apparently, a tune-up for this past Saturday night, when Larson won the 34th annual Chili Bowl in Tulsa, Oklahoma to earn his first Golden Driller trophy in 13 tries. Who says 13 is an unlucky number? Larson beat three-time consecutive Chili Bowl winner Christopher Bell, who’s about to join him on the NASCAR tour, by staying behind Bell for the first 38 laps before sliding into a lead he’d not relinquish, even after a pair of late-race caution periods.

With more than 300 racers on hand at indoor Tulsa Expo Raceway, and with 28 preliminary races on the docket before the 55-lap A Feature took place, Larson had a long, long wait following the Pole Shuffle that saw a nine-car field that was already-qualified for the A-Main feature battle for pole position, earned by Tanner Thorson (Larson qualified third behind Bell).

This year’s Chili Bowl was different for Larson, who formed his own midget team since driving this race in 2019; he’s won nine of the 11 features in which he’s participated since his team’s debut. Driving the No. 01 Lucas Oil/iRacing King-Toyota-powered midget, Larson received a late-race assist from two-time Chili Bowl winner Rico Abreu, who did his own slide job on Bell on a 41st lap restart. This allowed Larson to build a gap of more than a second before Bell overtook Abreu and set off in pursuit of the 27-year-old Larson.

By the time Bell regained second place, Larson’s one-second lead looked to be insurmountable, but for the final caution for pole man Thorson, who’d stopped on the track, retiring with a mechanical malady. That left Larson, Bell and Abreu to battle for the Driller, with the eventual winner acing the last restart and leaving Bell unable to claim the win. Larson’s margin of victory was a gaping .801 seconds.Teenage sensation Cannon McIntosh, who won the first night’s preliminary event, finished third, ahead of Logan Seavey and Abreu.

Finally on the victory lane stage, Larson let loose with his feelings. “I feel like I’m going to pass out, honestly,” he said. “And I’m sorry NASCAR. I’m sorry Daytona (International Speedway). But this is the biggest f-ing race I’ve ever won. I hope to win Daytona in a few weeks but this is bad ass. Holy cow!”

Larson lauded his team, including crew chief Paul Silva. “My gosh, we worked on this thing all week long, and there, in the feature I finally felt good, got where I could get down the straightaways and have grip. At that point,” Larson related, “I could lean into the cushion and be confident. It’s taken me 13 years [to win the Chili Bowl] and that’s almost half my age. It’s crazy!”