Kyle Larson ran circles around the competition at the Tricky Triangle called Pocono Raceway to win in Saturday’s debut of the NASCAR Xfinity series in the abbreviated Pocono Green 250, stopping three laps after the halfway point due to rain.

Erik Jones was chasing Larson down approaching the magical lap of 100, and in the process of making his comeback found the sudden downpour as another disappointment to his season, where Larson played the odds to be out front when the rains came to get his first Xfinity win of the year and fourth of his career.

“The rain was coming, and it was starting to sprinkle on my windshield,” said a grinning Larson.  “We weren’t quite to halfway yet, so I wasn’t really saying much on the radio, but once we did get to halfway, it started coming down a lot harder.  We were going to be racing a lot harder in the next lap or half a lap maybe, so I’m happy that it started down pouring when it did.  I had kept a gap on him (Jones) for about four laps when he was in second.”

Larson was lucky, using track position on lap 33 during the third caution, taking left side tires to get him back out first.  In addition, credit goes to his Chip Ganassi team meteorologist predicting the impending storm, timing it just right finding them in the top spot and on to the win.  That was all he needed with Jones, Ty Dillon, Kyle Busch and Joey Logano in close proximity.  Many times Larson had a challenge at the front with Dillon and later Jones, but playing his pit strategy to perfection was just what they needed to give him just the right advantage over everyone else.

Just as Larson was celebrating in victory lane, it was during the same red-flag period for the rain that fireworks flew back in the NASCAR Xfinity Garage Area between the crews of Ryan Reed and Ryan Sieg.  Punches were thrown between the crews arguing over contact between the two drivers earlier in the race that took out Sieg on the Long Pond straightaway. 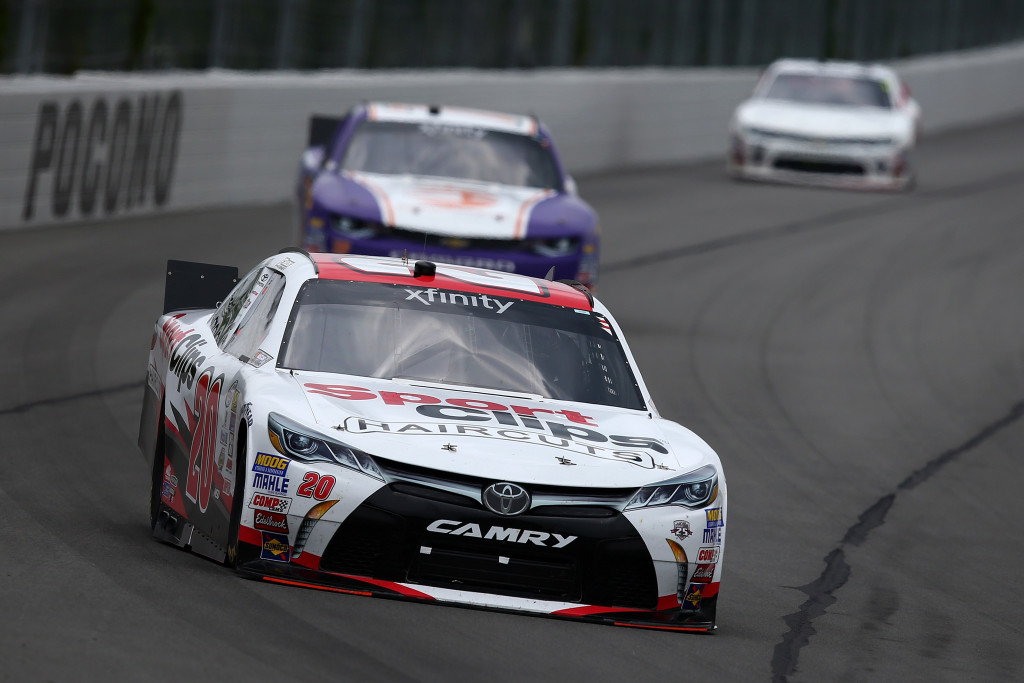 Later, Reed blew a tire hitting the turn two wall on lap 38 colliding with Jeremy Clements.  The Roush racer was having his car towed back to the garage to his team’s trailer with Reed checking in from the infield medical center to meet back up with his crew.  It was at that moment the awaiting Sieg crew, who was parked alongside of them, couldn’t hold back their emotions any longer.

“Went into Turn 1 and Ryan Reed – I should’ve been a little smarter than I was,” an upset and furious Sieg said.  “You can’t race around the kid.  He has a lot of money and he’s got a Roush car but he can’t drive it.  Just an idiot.  Everywhere he goes, it seems like he’s always in a wreck.  Money can’t buy skill, obviously with him.”

Reed saw things differently.  “Emotions run high, obviously,” he said.  “It’s racing.  I look forward to talking about it in a calm, cool, collected manner and working it out.  Obviously, we race every week, and it’s not going to do us any good to go out there and get into a battle royal.”

It will be interesting to see what the penalty call of these incidents NASCAR officials will make on Tuesday.  Xfinity practice starts on Friday at Michigan International Speedway.