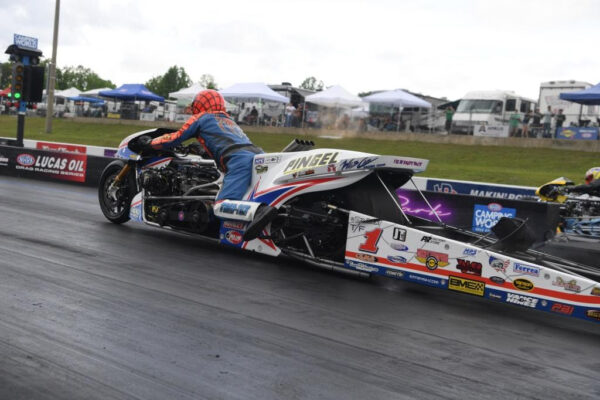 Larry McBride, aka “Spiderman” keeps resetting his own records on two wheels. Last November he shot down a quarter-mile at 265.95 mph; this past weekend on the Virginia Motorsports Park drag strip, he took his Top Fuel Motorcycle to an even-richer top speed of 268.38 mph, with the ET of 5.61-seconds just a bit off his quickest run of all time.

McBride, now 64, was performing in an exhibition of Top Fuel Motorcycle during the Virginia NHRA Nationals, a race meeting impacted by weather issues. They sure didn’t hurt McBride, whose home base is Poquoson, Virginia, a bit more than 100 miles from the Dinwiddie racetrack, where he annihilated the speed record. This is his home racetrack. 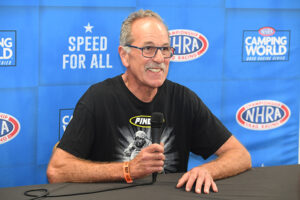 After making his pass under mostly cloudy skies, McBride was heralded throughout the NHRA Camping World Drag Racing Series pits, with most pro drivers absolutely aghast at his impressive pass. Social media erupted, with many nitro pro drivers promoting the run using the best way to get the word out. The reaction by fans was to go to NHRA and driver socials and watch the pass, over and over and over again. More than 1.5 million views across NHRA’s social media channels were recorded in less than two full days.

“To be able to do it here at home was incredible,” said McBride. “I’ve been treated like a king here,” and rightly so. “It has been awesome that all the Top Fuel car guys and Funny Car guys, who have helped me and all the support that I’ve gotten. The bike got a little bit loose and I had to pedal it a bit – you know, just grabbed the rear brake – to get it caught back up and, boy, really run a good back half. I knew I went awful fast,” he recognized. “I didn’t really realize I went 268 but I knew it was really fast.”

McBride thinks there’s more left in his Top Fuel Motorcycle, thinking that if he hadn’t had to pedal early in the run, “It would have been 270 on that pass!” As the record occurred, McBride said he was, as a longtime ambassador for the sport of two-wheeled drag racing, thrilled to have the new record and was pleased to see all the media attention it generated.

“It was my honor to be here and to be supporting NHRA, because I’m a major drag racing fan, you know, right down to the sportsman guys,” McBride acknowledged. “I just want to do everything I can do for drag racing. We’ve had a lot of help from people – a lot of people who have pitched in to help us a little bit so we could do the show that we were brought here to do.” As for the key to his monstrous and historic run? “Hold on tight. Stay down low. Throttle works both ways,” McBride said.

ETA: The wrong version of this story was uploaded on 5/18/22. This posted version is the correct version.