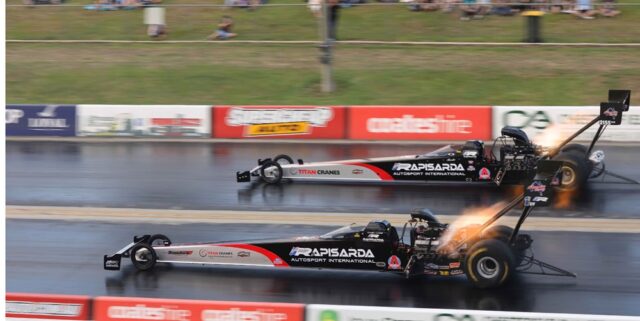 The first round of the Australian Top Fuel Championship (ATFC) will have a lot more fire power from the water box to the quarter-mile finish line, when racing gets underway at Sydney Dragway this coming weekend, January 21-22.

Dixon was invited to join the team after long-time driver Damien Harris became unavailable due to Western Australia border restrictions. This marks the first time Harris has missed a race with RAI in a decade. While he would have had no issues traveling to Sydney for the race meeting, the Western Australia state border is closed until February 4th. “Getting stuck in Sydney is not an option, because Damien has business commitments and a young family back home in Perth,” team owner Santo Rapisarda explained.

A regular visitor to Australia, Dixon last raced at the 2016 City of Ipswich Winternationals with Rapisarda. For this race meeting, he is partnering with the championship-winning duo of Newby and Santino Rapisarda. They race for the first time since winning Santo’s Summer Thunder meeting in January 2020.

“I was resigned to running a single car until Larry was granted a visa at the last minute, to come to Australia and race,” Santo Rapisarda said. “We only found out on Monday and the timeline is tight. Larry leaves Indy on Tuesday night and arrives in Australia on Thursday morning,” he said. “Then on Friday, he hits the track for two test and tune runs.”

The absence of Damien Harris was a difficult situation, especially for his tuner Santo Rapisarda Jr. “To not have Damien racing with our family is disappointing,” the elder Rapisarda said. “He’s been an essential member of our team over the past decade. His crew are disappointed not to be working with Damien, but they are excited to be given the opportunity to return to racing with Larry.

“Wayne and my boy Santino are ready to go racing. They have been working together for a long time and, hopefully, after they do a couple of runs to blow out the cobwebs, they can pick up where they left off in 2020. My family,” Rapisarda continued, “is excited to be returning to racing and looking forward to reconnecting with the fans who will get their first taste of nitro since May of last year.”

For the latter half of the 2021 NHRA Camping World Drag Racing Series season, Larry Dixon served as mentor to Pro Stock Motorcycle championship contender Steve Johnson, helping the Suzuki rider as he attempted to secure his first championship.