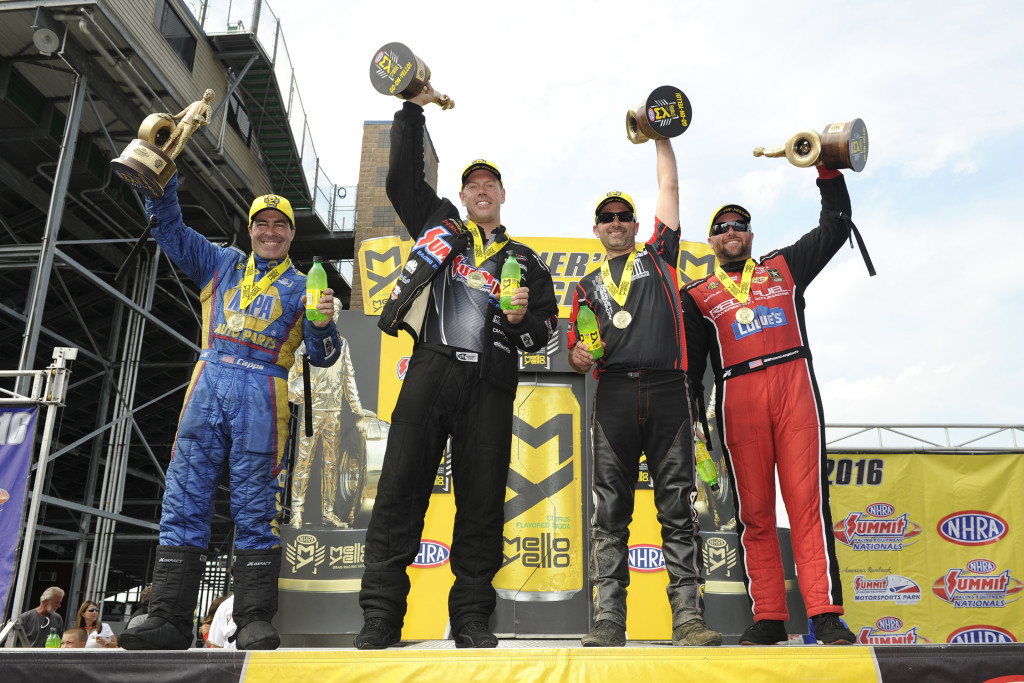 Top Fuel’s Shawn Langdon remembered what winning felt like last week at Bristol and decided to do it again seven days later in Sunday’s Summit Racing Equipment NHRA Nationals in Norwalk, Ohio.  Ron Capps’ recent tear in the Funny Car field takes him now to three wins in the last four races sending him to the ranks of the upper echelon of drag racers tying Don ’The Snake” Prudhomme with 49 career wins. 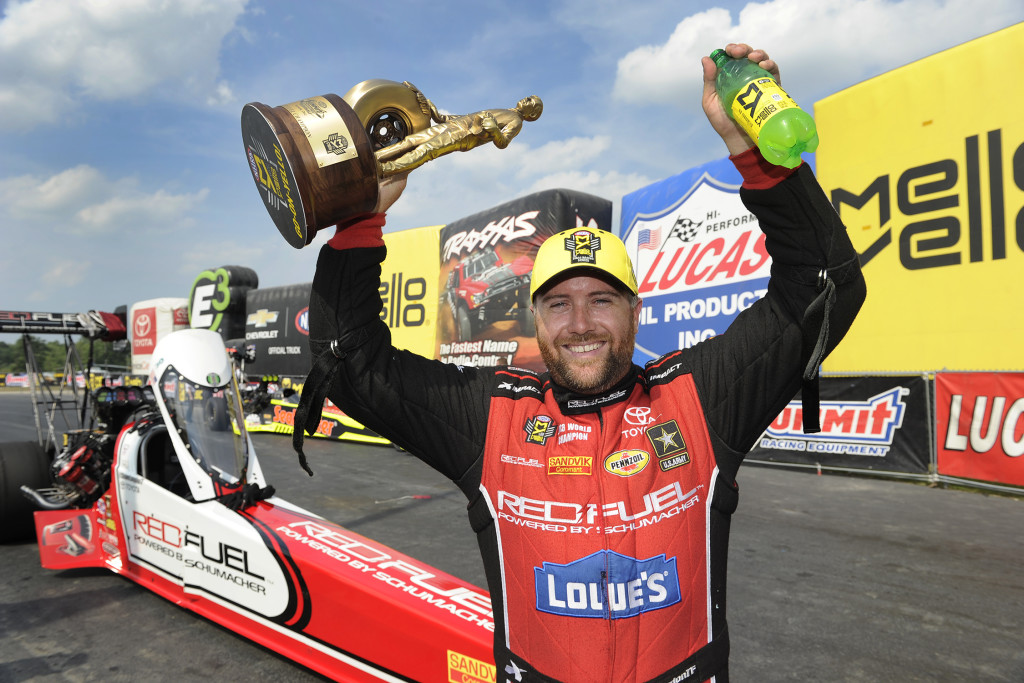 Shawn Langdon repeated as Top Fuel winner in Norwalk signifying his hot streak is real, but as a drag racer know a little luck can go a long way.  It was in the first round that found Langdon dejected going against Troy Buff thinking his tire smoking start of the day meant his day was over completely.  It was only at the top end did he discover his opponent Troy Buff had left with the red still on.

“We’re starting to see a little bit of luck come our way,” Langdon said.  “We’re fortunate that Troy Buff redlit in the first round.  We just went back to what we did in qualifying with the hot weather tune-up on Saturday and we were able to put together three very good runs.  We had a strong car today.”

Langdon and the team led by crew chiefs Todd Okuhara and Phil Shuler never looked back as they eliminated Don Schumacher Racing teammate Antron Brown in the second round, John Force Racing’s Brittany Force in the semifinal before knocking off Kalitta Racing’s J.R. Todd in the final round his run of 3.846 seconds, 319.75 mph to 3.937 seconds, 285.05 mph. 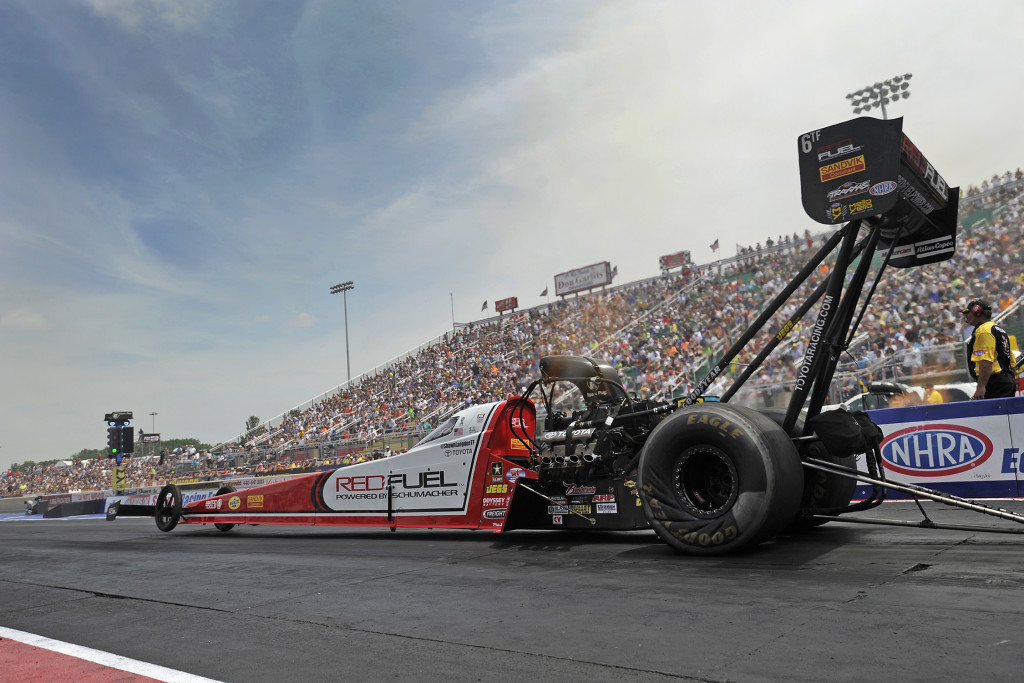 “It’s unbelievable, “Langdon said of winning his second straight event and 13th Top Fuel title of his career.  “From where we started at the beginning of the year with this team and all the changes that we made through the first couple of races – all the test sessions – this is what we worked for.  We kind of had to take a step back.  We started to see progress and had a better car, but we just weren’t getting the luck on Sunday.

“We just kept the mentality that we have to ride the waves.  Drag racing is very streaky.  You’re going to have the highs and the lows, but you have to not get down from the lows and not just soak in all the highs.  You have to continue to work and that’s what these guys have done. We’re reaping the benefits of all the hard work.”

In the past six Mello Yello events, Langdon has a 14-4 winning record.  He has climbed from 11th in Top Fuel points standings to sixth.  Doug Kalitta has a 69 points lead over Antron Brown after the completion of 12 NHRA National events. 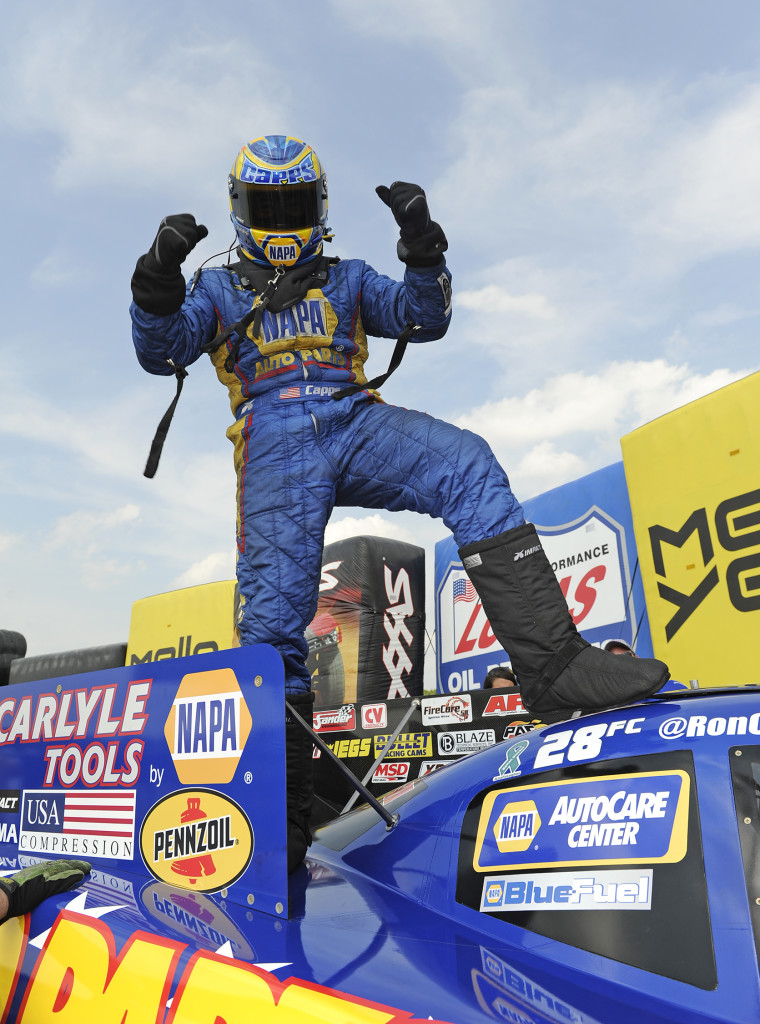 Ron Capps and his Don Schumacher Racing NAPA Dodge Charger Funny Car team won for the third time in the past four races on Sunday in the Mello Yello Drag Racing Series and extended their championship points lead to 130.

The fourth win of the season and 49th win of Capps’ career ties him with legendary Don Prudhomme for 11th on the NHRA all-time nitro wins list.

“He was my hero growing up,” Capps continued.  “These wins happen and you are told you have tied someone you are completely enamored with growing up, so when you are mentioned like that it blows me away.  It doesn’t seem possible, to be mentioned with someone like Snake is crazy.”

For Capps, his third win in the past four weeks and fourth of the season, shows continued dominance led by crew chief Rahn Tobler and assistant Eric Lane.  The win helped overcome mild disappointment of qualifying second at Norwalk that ended the team’s run of three straight poles.

“It feels awesome.” Capps said.  “This is one of the only two tracks where I hadn’t won.  It’s just a great place to race and now I have a trophy from Norwalk.” 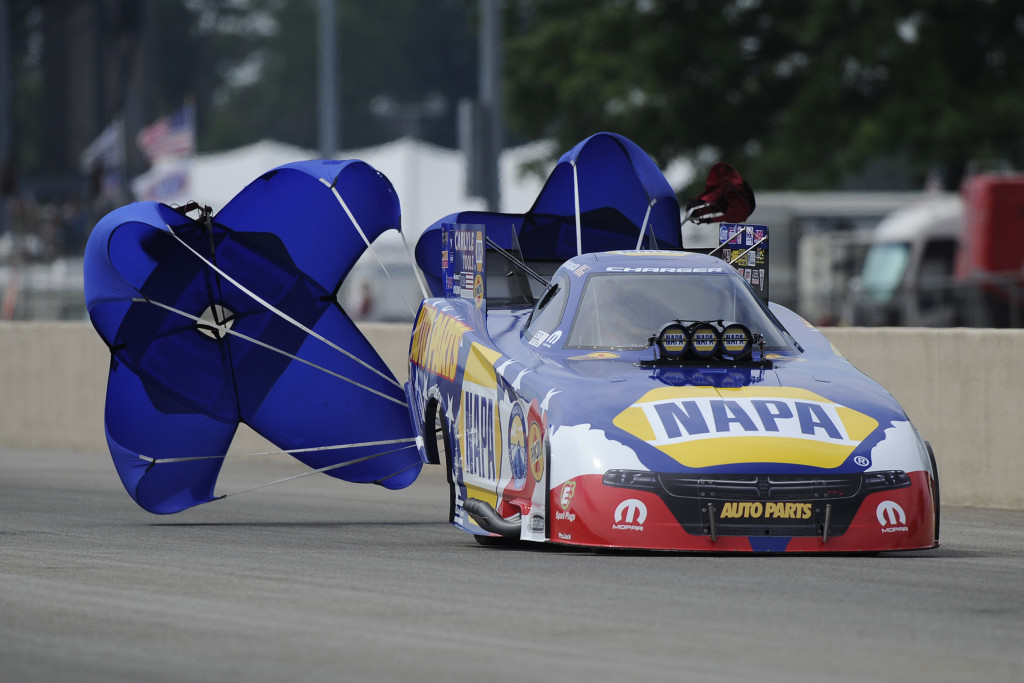 Capps arrived in Cleveland on Tuesday for an NHRA media tour that happened to be the day before the city was celebrating its Cavaliers winning the NBA championship below his hotel room.  That night, he threw out the first pitch for the Cleveland Indians game and the following day given a VIP tour of the Rock & Roll Hall of Fame.

“I felt like I belonged in Cleveland,” said the California native.  “It was a whole week of just getting ready to win this race.  It was fun.” 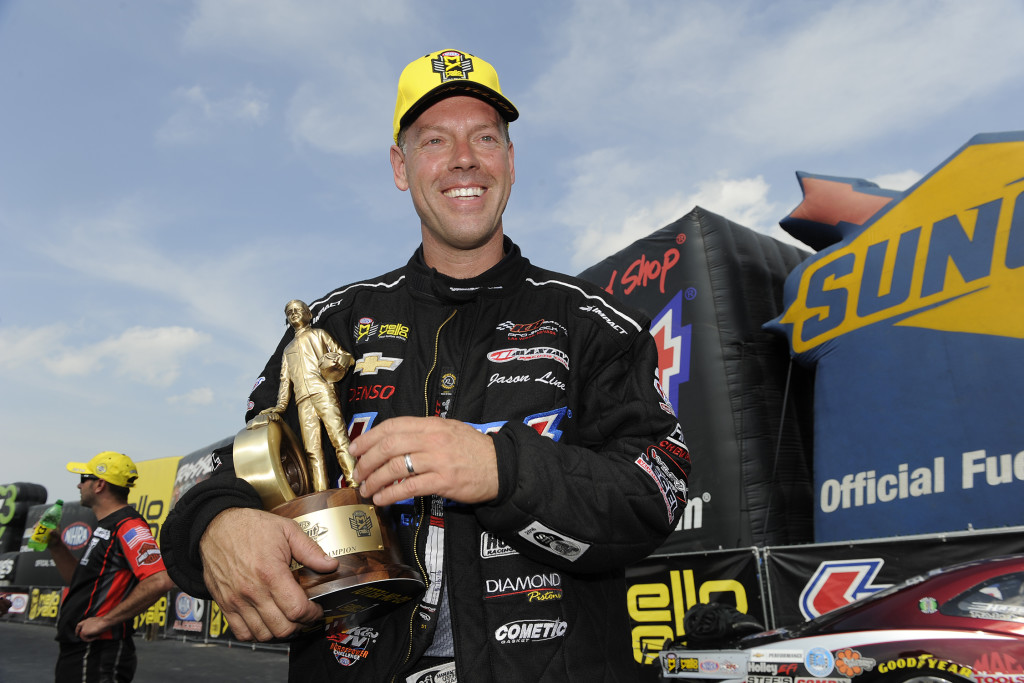 For the twelfth time in 12 Pro Stock races, it was one of the KB Racing teammates of Jason Line and No. 1 qualifer, Greg Anderson meeting again in the finals.  Line, in his Summit Racing Chevy Camaro, had the early advantage off the starting line (.043) and held off Anderson for his seventh win of the season.  Line had a winning pass of 6.678 seconds at a speed of 208.42 mph to Anderson’s trailing run of 6.717 at 208.36.  Line defeated Curt Steinbach, Erica Enders-Stevens, and Vincent Nobile en route to his final round match up with Anderson. 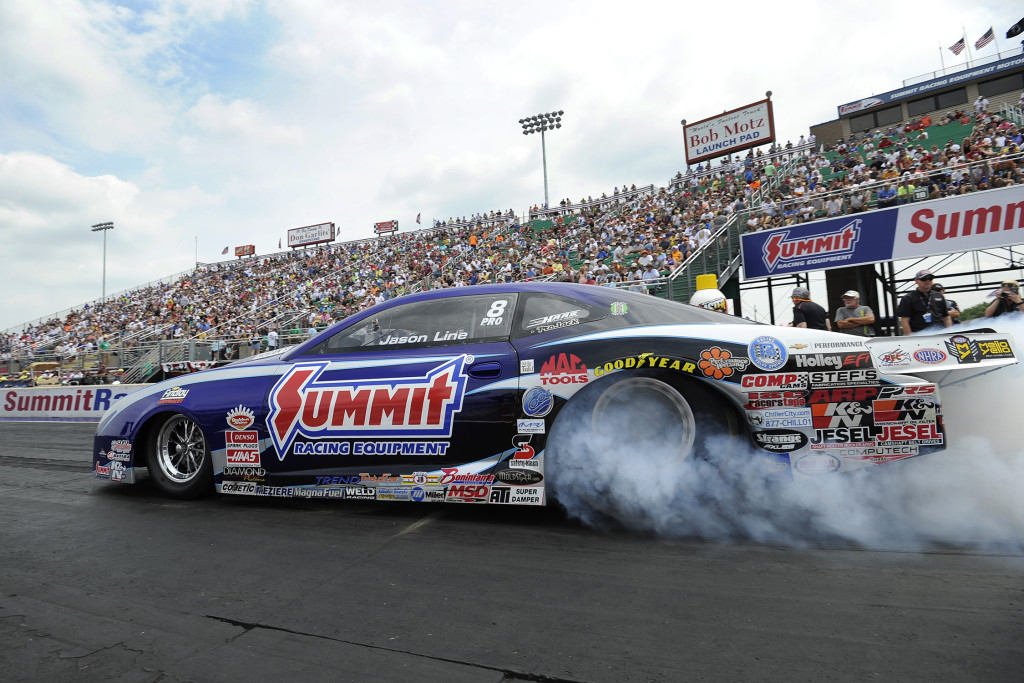 “It was hard today, it was very hot out there,” said Line, now the winner of 44 races and seventh of the season.  “We didn’t run as well as we would have liked today and there were cars that were very close to us.  They are getting closer and to win at the Summit race, in a Summit Car, at a Summit track is a huge deal.  Greg and I have been very fortunate to make that happen a bunch of times, its fun.”

Line and Anderson have already secured their position in the NHRA Countdown to the Championship in their Pro Stock division with their nearest competition over 450 points behind. 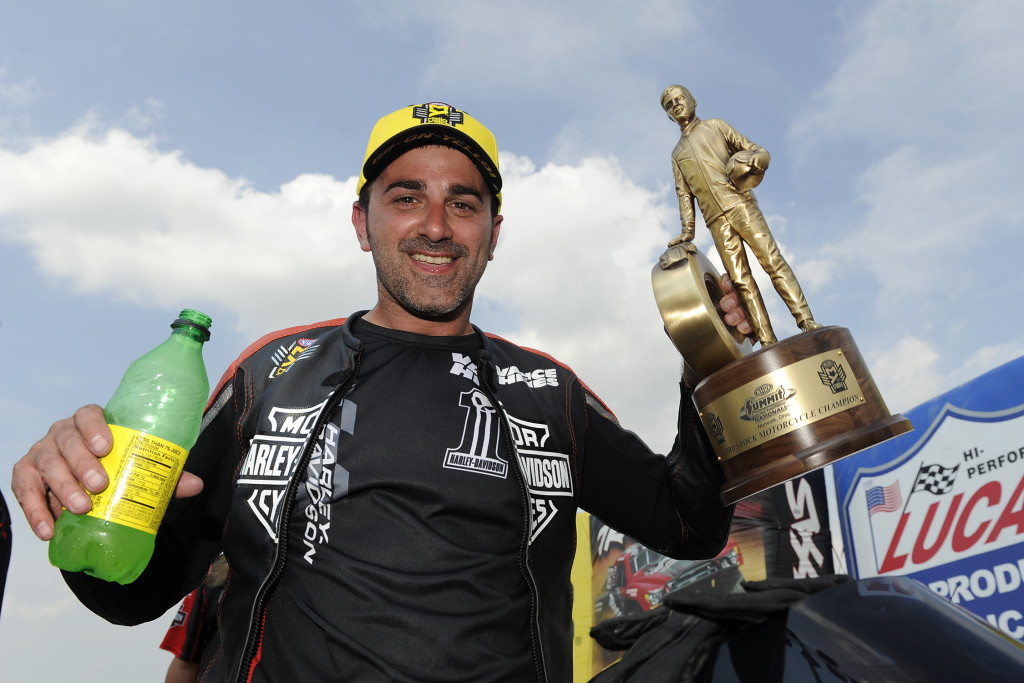 Pro Stock Motorcycle racer Eddie Krawiec won his third race of 2016 when he defeated his Harley-Davidson teammate Andrew Hines in the final.  Krawiec, who was also the No. 1 qualifier, had the winning run of 6.926 seconds at 194.72 mph to defeat Hines who covered the distance at 6.937 at 193.29.  His path to the win was eventful as he went off the end of the track into the sand trap following both his semifinal and final runs.

“We went back to the pit and had to take out 30 pounds of pea gravel,” said Krawiec.  “We put new brake pads on it, checked the fluid, drained everything and made sure it was 100 percent.  We stopped fine in the lanes and everything.  I see my fourth round win light against my teammate and went ‘not again’.  I pulled the clutch in and went in for a ride.”

Krawiec is building a substantial lead over his teammate, Andrew Hine in the points standings leading by 166. 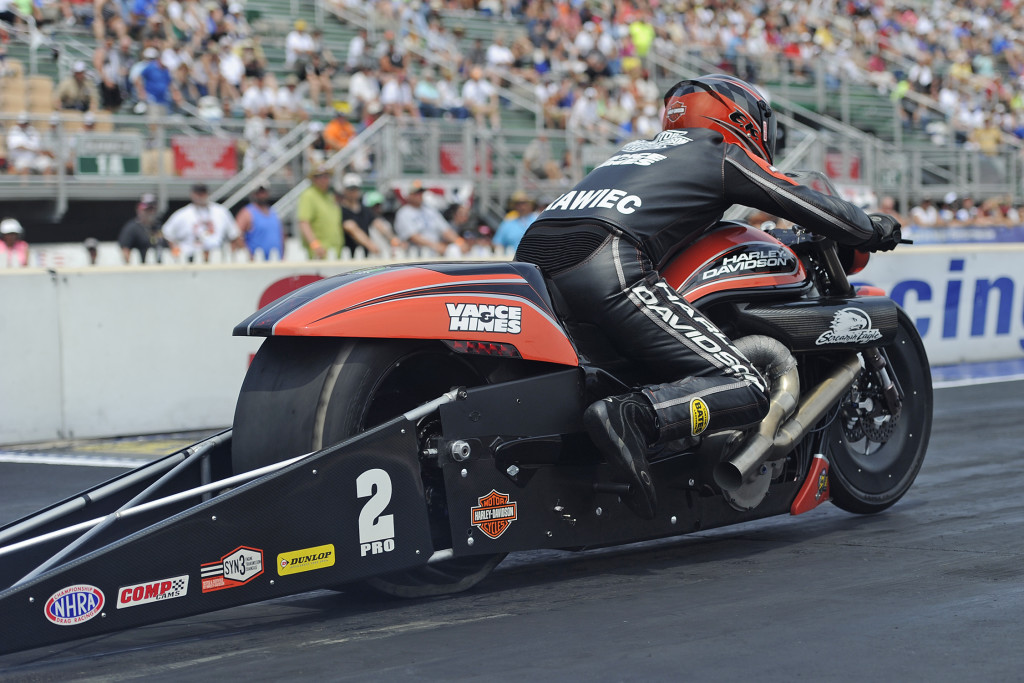 The NHRA Mello Yello Drag Racing will resume July 7-10 with the Route 66 NHRA Nationals at Route 66 Raceway, in Joliet, Ill.