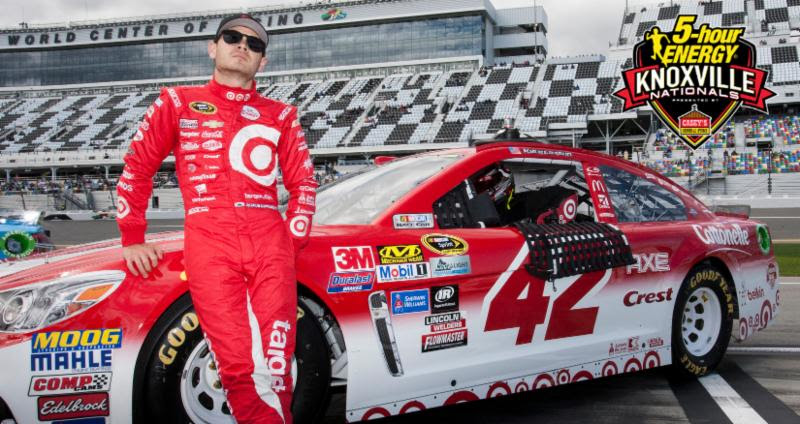 Larson, 23, will compete in sprint car racing’s greatest race for the third time in his career. When the racing phenom won his qualifying night in his rookie year he left the sprint car world in awe. He went on to finish 16th in Saturday’s finale and earned the event’s Rookie of the Year title.

“Getting a win at Knoxville is so big,” Larson said after his qualifying night win. “I wasn’t expecting to win. I was more hoping to finish top five or so, but I’m happy for the win.”

The following year, while racing full time in the NASCAR XFINITY Series (NXS), Larson again competed in the Knoxville Nationals. Larson, not locked into the finale with his qualifying night results, was forced to race in Friday’s preliminary night races. He started the day at Watkins Glen (N.Y.) International for NASCAR practice then flew to Knoxville, landing with just minutes to spare before hot laps. He won the feature event that night and locked himself into his second Knoxville Nationals finale. Before that, however, he had to return to Watkins Glen to race in the NXS event on Saturday afternoon. He again flew back to Knoxville that day and charged from a 17th-place starting position to a sixth-place finish.

While Larson, of Elk Grove, Calif., has turned his focus to earning his first Sprint Cup win and a NASCAR championship, he’s been very open about his love for sprint car racing. The NSCS schedule has an off-weekend on August 12-13, allowing Larson to return to sprint car racing’s biggest stage. Larson and car owner/crew chief Paul Silva will field the white No. 57 entry he’s been racing this season in the 5-hour ENERGY® Knoxville Nationals presented by Casey’s General Stores. This year, the duo have competed in eight sprint car events, earning an amazing two wins, six top-five and seven top-10 finishes.

In the meantime, Larson will continue to race the No. 42 Target Chevy for Chip Ganassi Racing in the NSCS, where, on top of his Rookie of the Year honors, he’s earned 13 top-five and 32 top-10 finishes, including four runner-up finishes.

With the success Larson has experienced in such little Knoxville Raceway track time, all competitors will have their eyes on the “part-time” driver as he chases his dream of winning the Knoxville Nationals.

About Ralph Guerra 42 Articles
Ralph Guerra is the associate editor for RacingJunk.com. Ralph grew up in Southern California's car culture and quickly became infatuated with anything and everything V8. Whether it was a 63 Fairlane with a 289 or a Gt500 with a supercharged 5.4, if it was a V8 he wanted to drive it--fast.