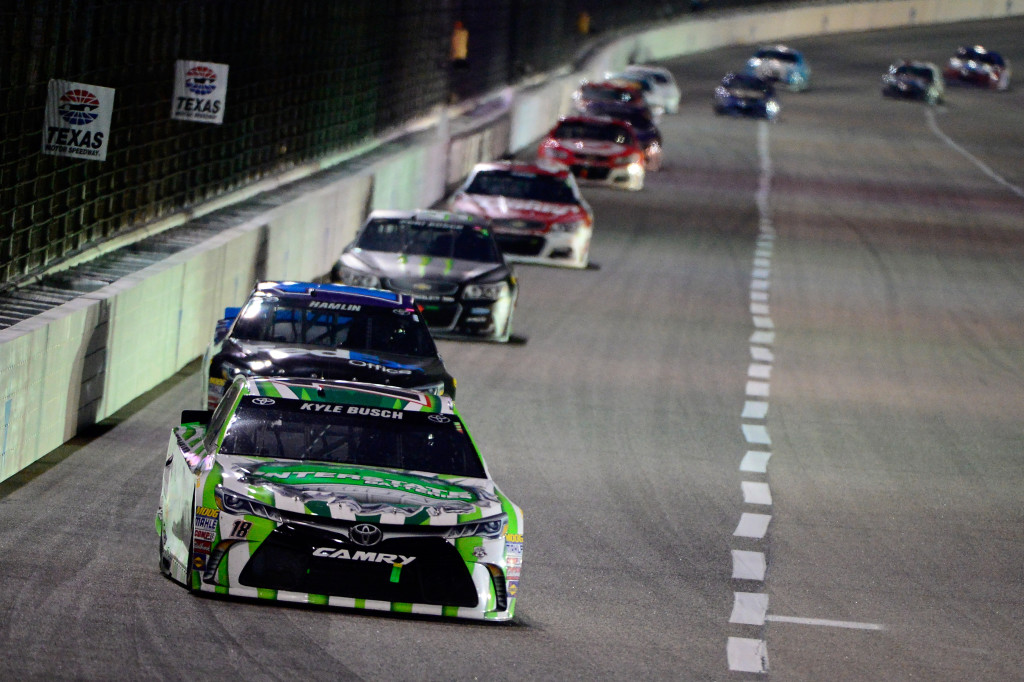 Kyle Busch may have not dominated the race this time, but he was quick enough when he had to be to win the Duck Commander 500 NASCAR Sprint Cup race on Saturday night at Texas Motor Speedway, holding off Dale Earnhardt, Jr. by 3.904 seconds.

The Texas victory was his 36th of his career after winning in Martinsville last week, joining Jimmie Johnson as the only two-time winners so far in 2016, virtually ensuring his qualifications to defend his championship hopes into the Sprint Cup Chase this fall.  Actually, since his comeback in all his races since last June, he’s won 22 percent of them, showing the maturity that’s he’s engaged personally since his 2015 Daytona crash that is taking his driving to the next level.

“Our car was really, really fast, especially entry and center of the corner, and as the night progressed, I think the track actually came to us a little bit,” said Busch, who took over the series lead by six points over fourth-place finisher Jimmie Johnson.  “Our car got a lot better, and [crew chief] Adam [Stevens] made some great adjustments all night long.  We fought it in the beginning.   We weren’t very good.” 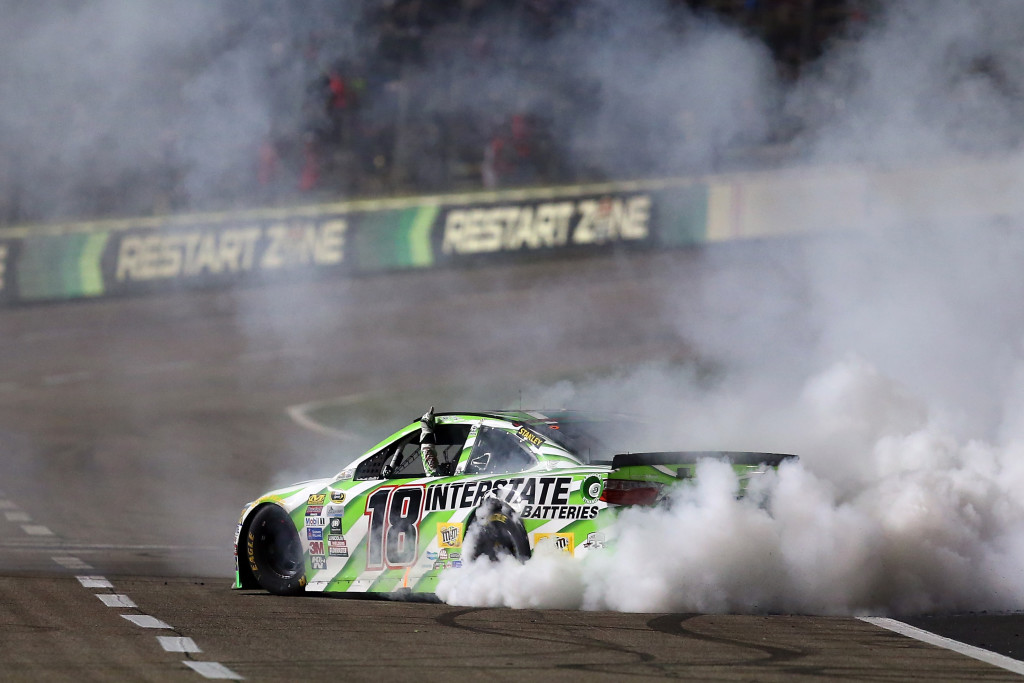 It was Busch’s second consecutive winning race weekend, dominating also last week’s events in Martinsville becoming only the second driver in NASCAR history to dominate all the National touring races continually in taking the Xfinity and Cup wins since Harry Gant did it in the fall of 1991, winning in back-to-back weekends at Richmond and Dover.

What led up to the turn of events that sent Busch to yet another weekend sweep occurred on lap 292.  The previous caution brought out by Greg Biffle grazing the wall saw then leader, Martin Truex, Jr. stay out for track position, being joined by Austin Dillon on the restart putting the front row on used tires and in direct jeopardy with the quicker cars behind them.  As soon as the track went green, Dillon quickly slid back, leaving Truex and Busch sprinting away up front.

Then Dillon spun in front of Jimmie Johnson down the backstretch, tangling with his Richard Childress Racing’s teammates of Paul Menard and Ryan Newman, resetting the field again on the lengthy yellow with Truex still on point.  With one lap before green, Busch lined up on the outside of Truex with fresher tires on the restart ready to pounce.  When the green waved again with 33 laps to go, Busch, driving his Interstate Batteries Toyota, sailed away, opening up a 10 car-length lead distancing him that quickly just after three laps. 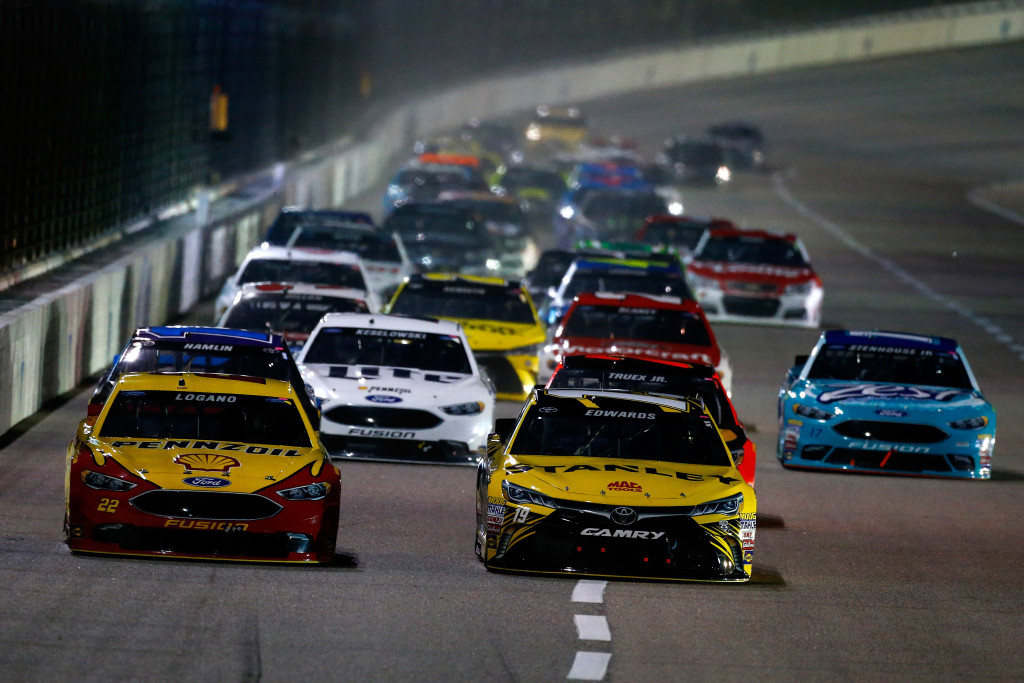 Behind Busch, Dale Earnhardt, Jr. muscled his way to second, powering by first Truex and then later Joey Logano, who finished third.

“We got lucky at the end to be able to restart on the inside,” said Earnhardt, who stated he learned so much from the day before racing in the Xfinity event.  “The outside was kind of difficult, and we restarted fifth and were able to get up to third and raced the 22 (Logano) at the end.  It was fun.  The car was very loose and very challenging but a lot of fun for me.  Obviously, our car was good, so passing guys — we had a lot of passing, which with the ’14 or ’15 package, I would have never got by Joey.  So, it was fun to have an opportunity to sort of set somebody up and get it by him there at the end, and that’s due to the direction we went this year with the low down force.  Pretty cool.

“Kyle put it on them at the end.  He ran as hard as he could, and his car was there for him.  Sucks for Martin [Truex] because he had such a great car, but Martin just has to remember that he’s going to get that opportunity again.  They’ve got a great team.”

Truex owned the show the second half of the race, leading for 151 of the 334 laps and seemed unstoppable until his crew made the wrong decision to stay out on older tires on lap 289. 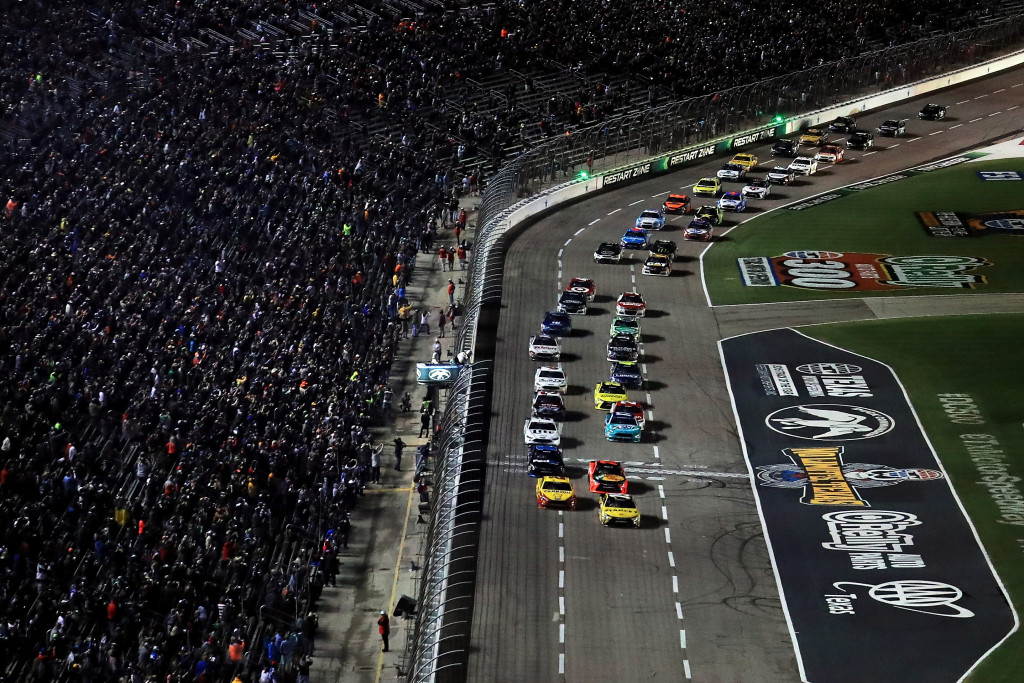 “It was Cole’s (crew chief, Pearn) call,” said a dejected Truex, who finished in sixth.  “He did call me in at the last second, but our plan was to stay out, anyway.  At that point, I didn’t want to hit the (pit entrance) cone.  It’s just the way it goes.  Had we stayed green on that other restart, we got the lead and drove away.  We kept getting yellows and the tires kept building up more air and more air in them.  By the time we got to rolling along there, we didn’t have the grip that everyone else had and was just sliding around the track.  It’s frustrating, but that’s racing.  We were so fast all night and did everything we were supposed to do except for that one deal there.  It hurts, it’s tough, but we still have a lot to look forward to this year.  We’ll come out of this smarter and stronger next time.”

The average speed of the Duck Commander 500 was 138.355 mph slowed down by seven caution periods for 41 laps.  There were 17 lead changes among eight drivers. 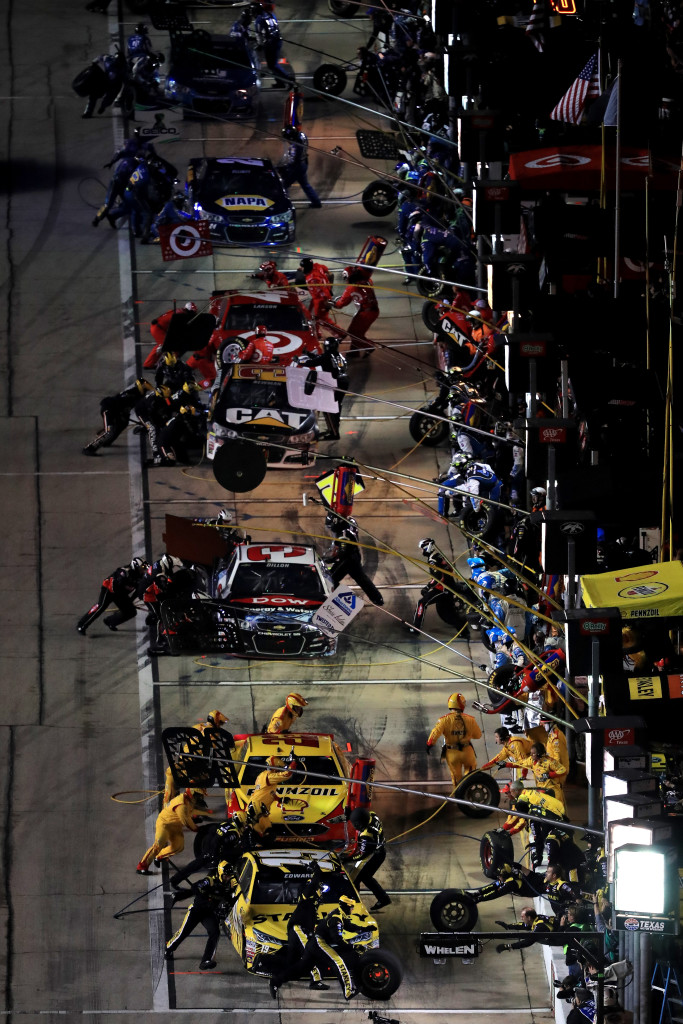 Up next for the NASCAR Sprint Cup teams are the famous words of “It’s Bristol, Baby!”  The Food City 500 at the Bristol Motor Speedway rolls off on Sunday, April 17, at 1 p.m. EDT on the FOX Network.