With just one race to go before the NASCAR Xfinity Chase of 12 starts in Kentucky, optimism to make the Championship was at an all-time fever pitch at Richmond International Raceway Friday night.  That is until Kyle Busch found his groove and from that point on, after a quick pit stop, never looked back to win the Virgina529 Savings 250 on Friday night.

It was his 84th NASCAR record-setting Xfinity win, sixth at Richmond and eighth out of 14 starts in 2016.  Busch made it look easy at night, but during the day in practice and qualifying, his Joe Gibbs Racing No. 18 Toyota was anything but right on a car that had numerous handling problems. It didn’t look good for the defending Sprint Cup Champion heading into the evening.

“I just doubted our car today,” said Busch, who led for 197 laps.  “It just wasn’t right.  We just kind of missed it all through practice.  It wasn’t good there, and then we qualified, and it was just a handful in qualifying.  We didn’t qualify very well—seventh.  That’s not very good by my expectations.

“We worked on it there at the start of the race.  We were really out of control and loose, and I got to fourth, I thought that was kind where we were going to be.  Then my guys had an awesome pit stop, got me out front, and (crew chief) Chris Gayle made some really smart adjustments to it that first time on pit road.  After that, it was lights out.  It was on a rail from there.”

The only other car near Busch’s performance was his JGR teammate, Erik Jones, who was behind at the finish by 6.453 seconds, leading for only two laps during green flag pit stops.

“Not much to say,” said Jones.  “He had the same setup as us.  He’s just that good.  It’s unfortunate.  We’ve run second to him a number of times this year.  I wish all those were wins, but we’ve been getting stronger every time.”

Now with only one race remaining at Chicagoland next week to end their regular season, the current NASCAR Xfinity Chase of 12 standings are as follows:  1. Erik Jones – 3 wins; 2. Elliott Sadler – 2 Wins; 3. Daniel Suarez – 1 Win.  They are followed by No. 4 Justin Allgaier, 5 Ty Dillon, 6 Brendan Gaughan, 7 Brennan Poole, 8 Brandon Jones, 9 Darrell Wallace, and 10 Ryan Reed, who have all secured their spots locking in on points. 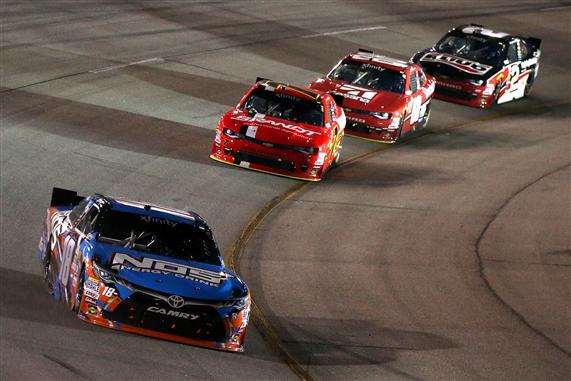 The complete Chase of 12 saga will end next weekend at the Drive for Safety 300 at Chicagoland Speedway on Saturday, Sept. 17 on NBC.