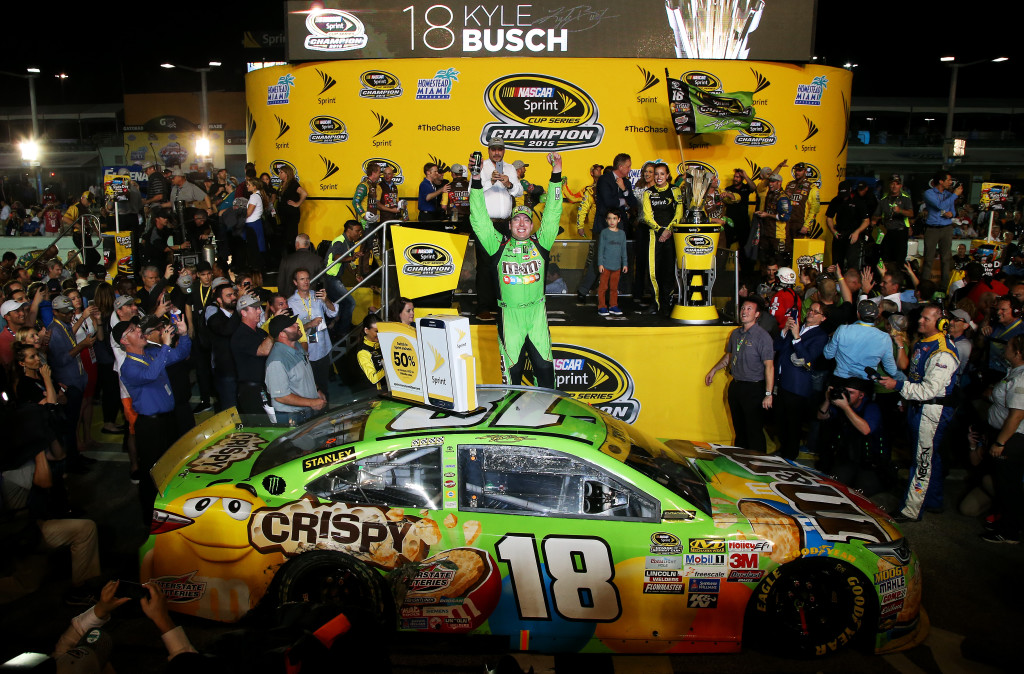 Kyle Busch had plenty of time earlier this year, missing 11 races after his devastating Daytona crash, to think about what it was going to take to regenerate him back into racing shape.  After months of rehabilitation, he turned his dream into one of the biggest motorsports comebacks of all time and in sports itself, winning the Ford EcoBoost 400 that included taking his first Sprint Cup championship crown and first title for car manufacturer, Toyota.

As the race progressed to an ultimate finish, championship drivers Martin Truex, Jr., Kevin Harvick, Jeff Gordon and Kyle Busch all hit the pits during the green flag period between laps 214 through 217 for four tires along with Brad Keselowski and Kyle Larson running in the front pack.

Staying Green, Keselowski took the lead running a good leader’s pace and as he did in the Xfinity race from yesterday, Kyle Larson was on his way marching to the front to fight it out with Keselowski after passing Busch for second with 13 laps to go.  Suddenly with 11 laps from the finish, debris was spotted at the start/finish line bringing the field back together as the yellow flag came back out for the seventh time of the race. 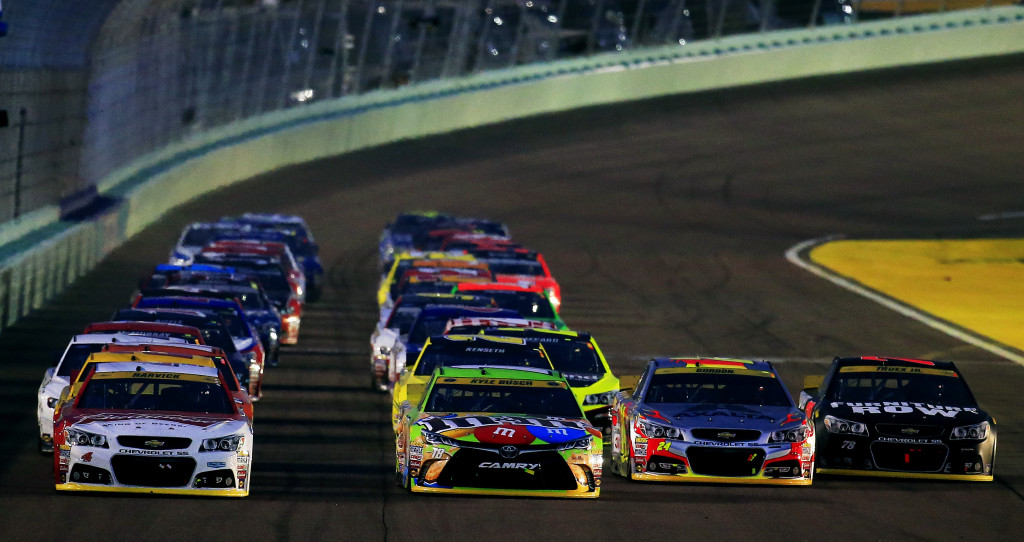 All the frontrunners came to the pits with nine laps to go, letting the race pit crews decide the final restart order that turned out to be Keselowski, Busch, Larson, Harvick, and Denny Hamlin.  On the restart, the leader, Keselowski surprised Busch by taking the inside lane, and as the race went Green with seven laps to go, Busch immediately took to his high side groove passing the No. 2 Ford with Harvick right on Busch’s bumper in the outside lane.   Busch held his own ground through the first two corners, cleared Keselowski down the backstretch and began to pull away.  He kept the hammer down and darted away, winning the race by 1.552 seconds over Harvick, denying his campaign for back-to-back championships.

“It’s pretty unbelievable!” Busch said reaching his fifth win of the year and 34th overall.  “A dream of a lifetime, a dream come true.  I just can’t believe it, with everything that happened this year and all the turmoil, all the things that I went through, that my wife [Samantha] went through and the people that are around me went through.

“This championship is all for these guys, my wife, my family, everyone who has had to sacrifice so much to get me here to this place today, whether it was on my team right now or on my teams in the past.  It’s really awesome, awesome, awesome!” 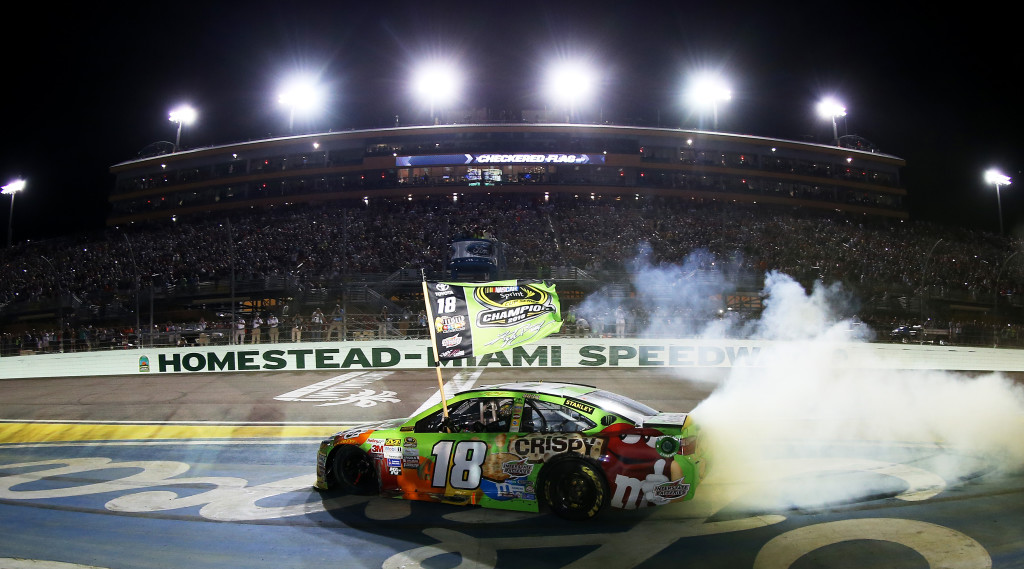 Busch knew his M&Ms Toyota had the speed to go the distance but couldn’t help but wonder what Harvick may have in store for him in a quick seven laps to decide it all.

“On the restart, I just knew, ‘Don’t spin your tires,’” Busch said.  “If you spin them a little bit, at least get them reattached – don’t matter if you lose a little bit of ground to who’s in front of you, just make sure you have a good run getting into Turn 1 and keep Harvick behind me.

“Did all of those things, got to Turn 1 side-by-side with [Brad] Keselowski and, man, I just put it on kill and held it wide open through there and was able to get by Keselowski.  And anybody that got out front, especially on new tires, they could drive away, and it felt so good to be out there at that moment.”

Kyle’s championship bid joins his brother Kurt as a fellow Sprint Cup champion, who won in 2004, joining the Labonte brothers of Terry (1984) and Bobby (2000) as the only other brothers to achieve NASCAR’s highest prize. 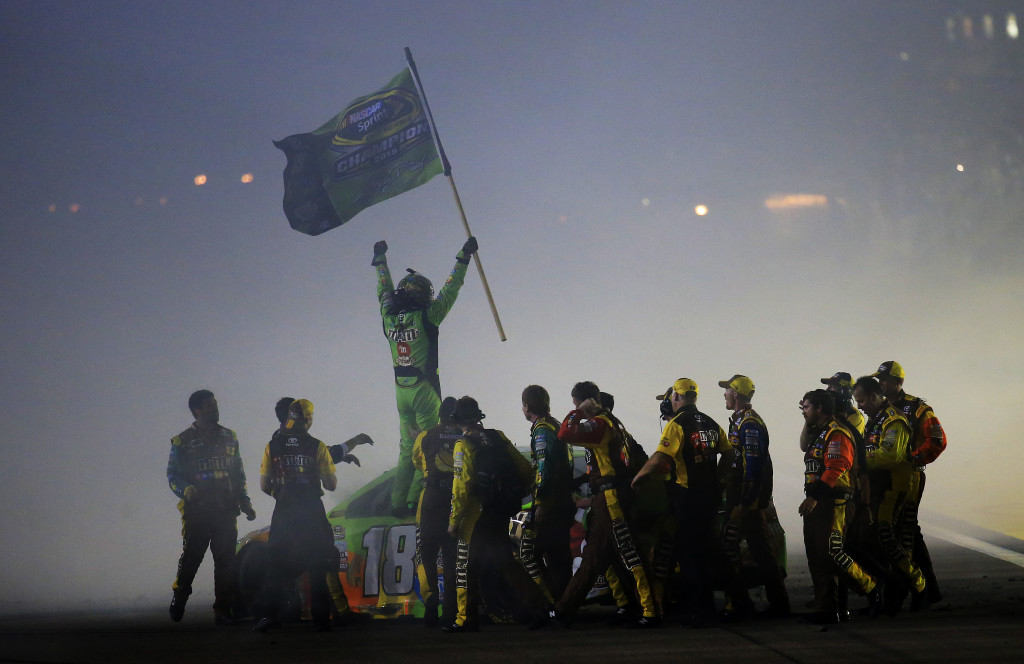 The restart did give Kevin Harvick’s Budweiser Chevrolet one last chance to defend his crown, but the driver of the No. 4 Chevrolet couldn’t capitalize on his golden opportunity.

“I thought there at the end at the restart, we might do a little better than that,” Harvick said.  “But, obviously, either the splitter was on the ground or the car was just tighter than it probably needed to be, and I just couldn’t hustle it and got it tight and got it up the racetrack and got behind.

“The 18 car [Busch], he just had the speed all night, for the most part.  As the night went, I just couldn’t find anywhere that would make the car run better.  The higher I would run, the looser it would get.  I’d get on the seams, and then it would push the front and slide the back.  Just never could find anything.”

Harvick, who won the final two races of 2014 to secure his first title, finished second again, for the 13th time this season.  With his three victories this season, he finished the year with 16 top-two results. 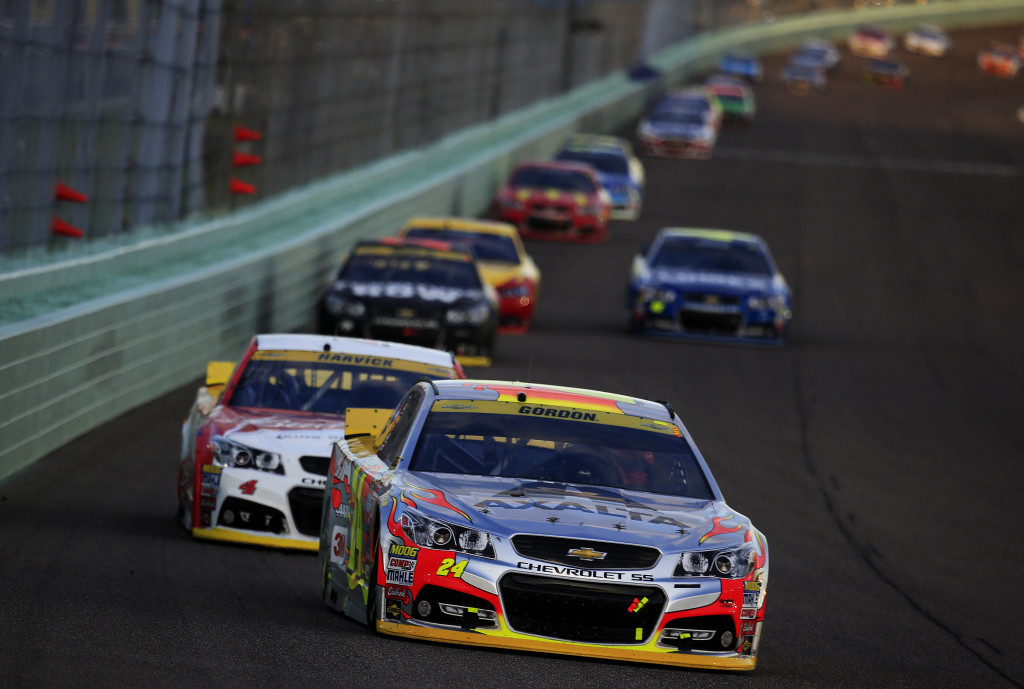 After a two-hour rain delay that only made the race’s anticipation build, Jeff Gordon in his final drive was loving every moment with the fans mobbing him wherever he went.  In a final salute to the fans, he took the lead after a restart on lap 36 bringing the sold-out screaming crowd to their feet cheering him on.

“You know, gosh, I’ll be honest, the competitor in me got a little bit — just so caught up in the moment of the race where we took the lead and I got really excited,” said Gordon, the four-time champion, who would finish sixth in his last Sprint Cup race at 797 starts and 93 wins.  “I thought, okay, we’ve got clean air, let’s see what we have, and I knew we needed a few adjustments.  The track was really slick.  I actually felt like when I got ahead of Kyle that we could pull away from him.  I kind of got excited and got my hopes up, but then Kevin [Harvick] started coming on pretty strong, and then we had that restart, and you know, I knew when those guys got by me I just didn’t quite have what they had.  I was just lacking a couple little things.” 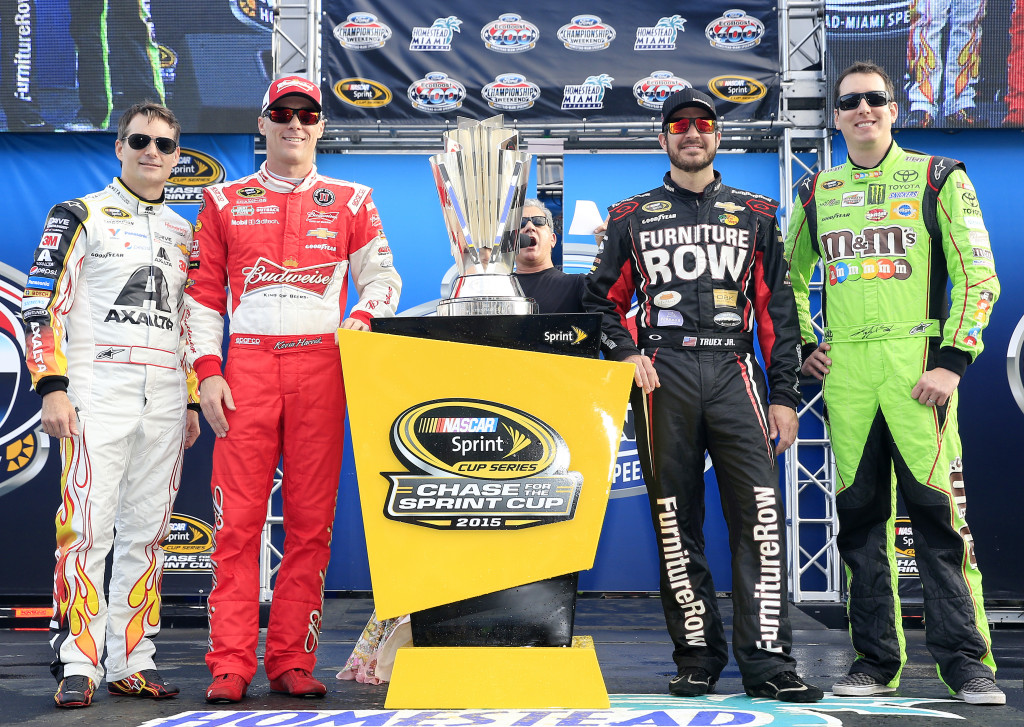 As Busch and Harvick were finishing up front, Brad Keselowski was third along with his Penske Racing teammate, Joey Logano in fourth with Kyle Larson finishing fifth.  Gordon was sixth, with Matt Kenseth, Kurt Busch, Jimmie Johnson and Denny Hamlin rounding out the top 10.

The average speed of the Ford EcoBoost 400 was 131.755 miles per hour with the race being slowed for seven cautions for 30 laps.  There were 18 lead changes among eight drivers.

The 2016 Sprint Cup season kicks off at the Daytona International Speedway on Sunday, February 21 for the running of the Daytona 500 on FOX Sports.