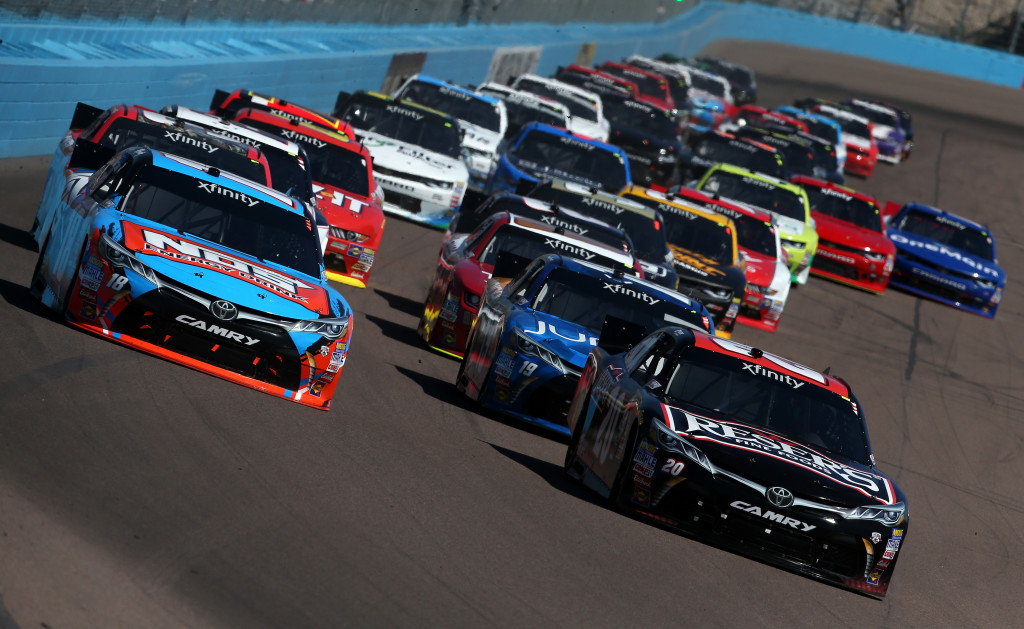 The all-pervading Joe Gibbs Racing teams in the NASCAR Xfinity Series again reigned supreme on Saturday afternoon for the Axalta Faster Tougher Brighter 200 at the one-mile Phoenix International Raceway with Kyle Busch making it three-in-row after claiming victories at Atlanta, Las Vegas and now in Phoenix, earning his 79th win in the series.

In only the fourth race of the 2016 Xfinity series, the JGR Toyota organization is totally towering over the other teams in everything from race strategy, fuel mileage and chassis setup, seeing for the first time ever in NASCAR history a second consecutive identical 1-2-3 finish, respectively, with the Gibbs’ team reaching the accomplishment.  It had never happened before Saturday.

Since his comeback from his Daytona accident in June of 2015, consisting of 17 Xfinity races ago, he’s won nine of them.  At Phoenix, it was his ninth track victory and the phenomenal feat of winning three in a row for the third time in his already storied career, proving that he’s unstoppable right now.  Busch has led 493 of a possible 563 laps in his three 2016 starts. 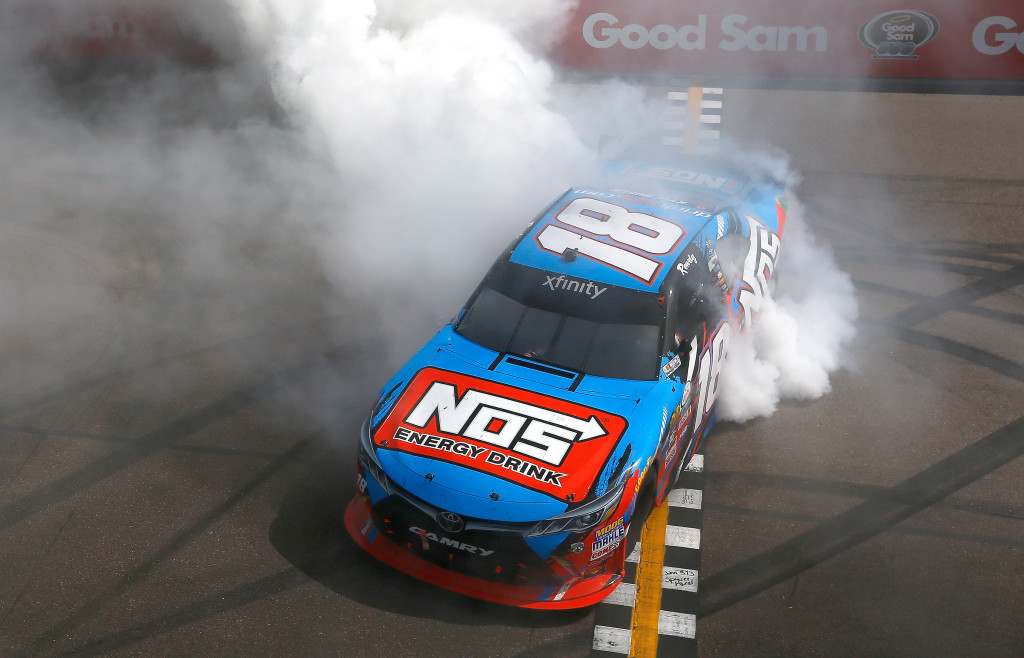 “It’s just a knack for this place, I guess,” said defending Sprint Cup champion, Busch, of his Phoenix prowess.  “We’ve been off a little bit on the [Sprint] Cup side for years, but this year we seem to be a lot better, and last year we improved a lot.  But the XFINITY program has always been good.

“I can’t say enough about [crew chief] Chris Gayle and everyone at Joe Gibbs Racing.  Obviously, they did a great job for me, giving me the car that I needed and prepared everything for today’s race.”

The pole-sitter, Erik Jones, in another JGR Toyota, fought hard in the race mounting a late campaign catching Busch in race traffic.  Both entered the pits for a late race green flag pit stop with 28 laps to go for right side tires and refueling.  Jones’ JGR crew was outpaced, losing three seconds on the stop with the result being a 2.285 seconds distance between the pair at the checkered flag.

“I knew we were in a little bit of trouble when he rolled by, right when we were just trying to leave the box,” Jones said.  “I didn’t know how much time that was going to equal to, but by the time we got up to speed, he was four or five seconds ahead.  It was too much to run back down in that amount of time.” 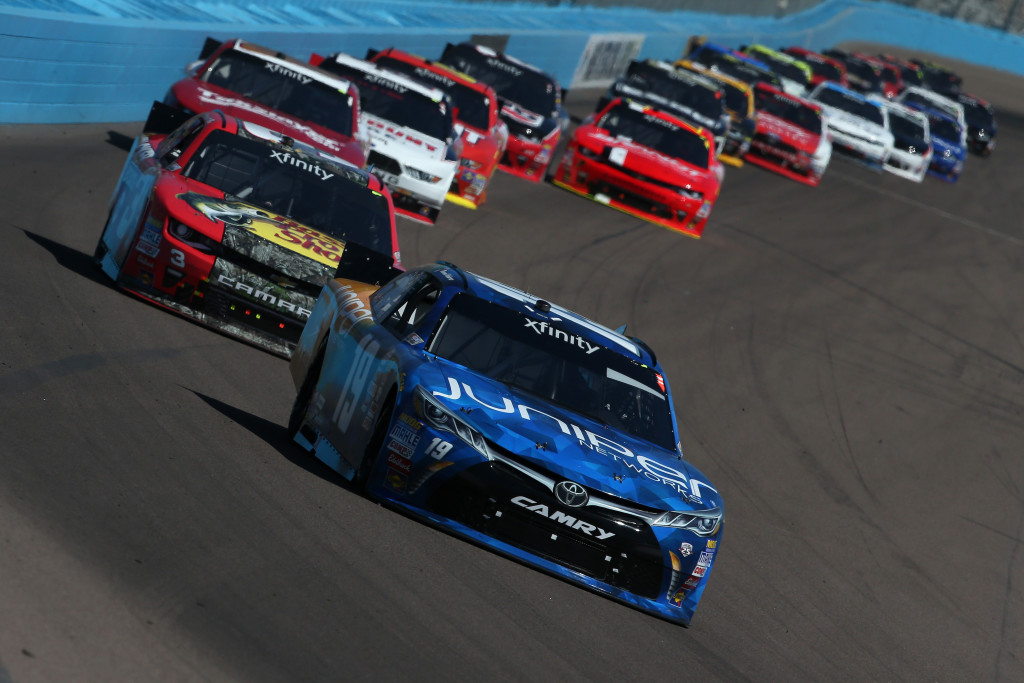 The JGR trio of Busch, Jones and Daniel Suarez occupied the top three slots and it was the JR Motorsports teammates of Justin Allgaier in fourth, racing to his first top five finish since 2013, followed by Chase Elliott rounding out the top five.

The Axalta 200’s average speed was 114.087 mph after being reduced by three caution flags for 16 laps.  There were five lead changes among four drivers with Busch again leading the most at 175 circuits of the 200-lap event. 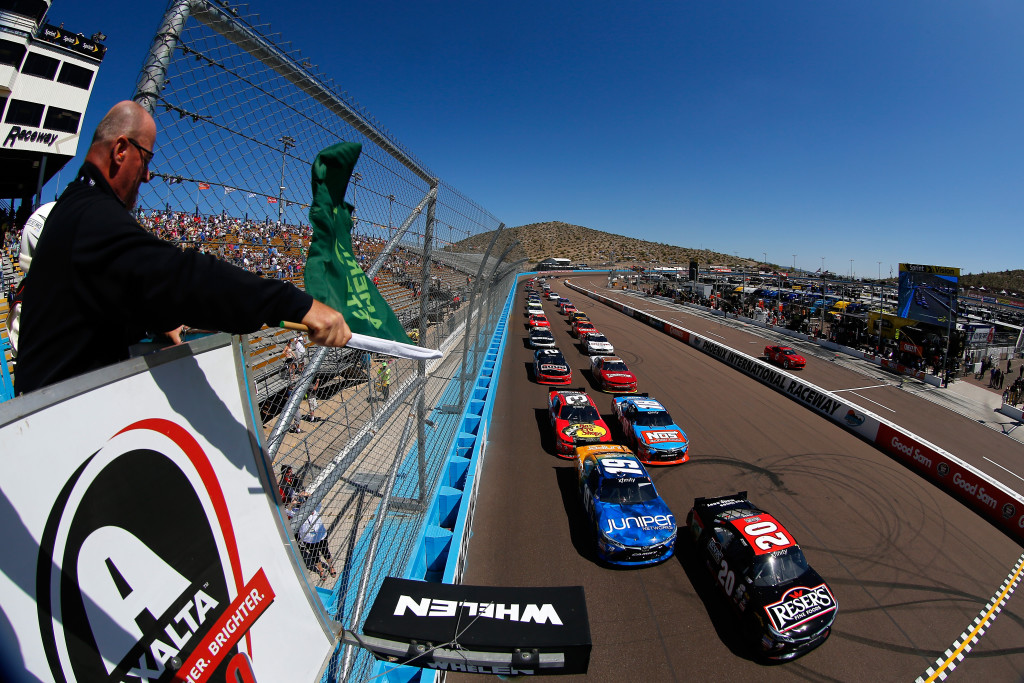