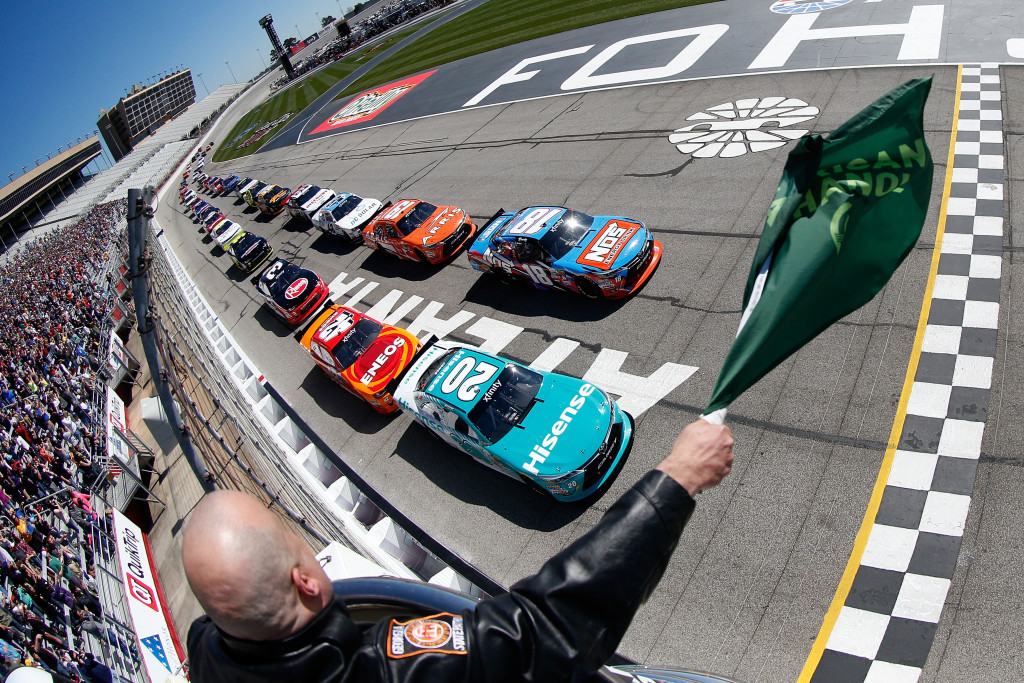 It appeared to be a Kyle Busch runaway for most of the Heads Up Georgia 250 NASCAR Xfinity race on Saturday at Atlanta Motor Speedway, but right there at the end, another Kyle, as in Larson, made a strong challenge, but it still wasn’t enough to stop that other Kyle from his record-setting 77th series win.  Busch, adding to his impressive track win list, came home victorious for the first time in the Xfinity series at the 1.54-mile Georgia track.

With tire wear imperative making handling the key to going fast, many of the teams found themselves slipping and sliding throughout the race.  Times would fall off as much as three-seconds during long green flag periods and Busch was able to be part of a privileged group that was able to save his tires over the rough asphalt to run up front and stay there.

It was on the restart with 29 laps to go that surged Busch a 1.5-second lead over Kyle Larson, who was doing all he could avoiding lap traffic, but still managed to close out Busch’s lead to only .466-of a second at the checkered flag. 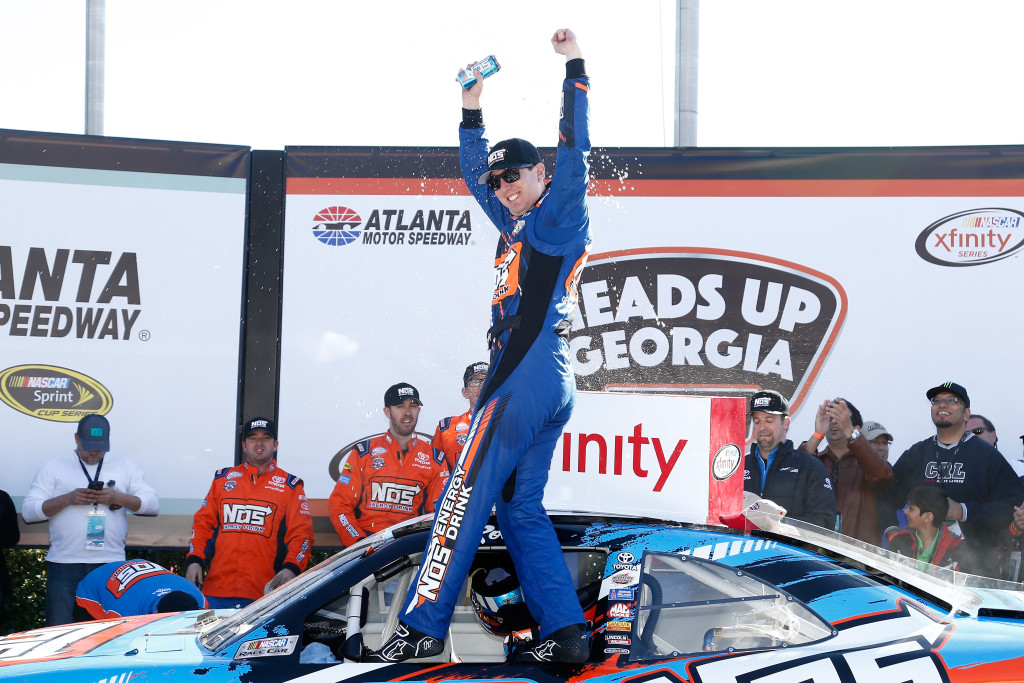 “I actually thought that last run was going to be too long,” Busch said.  “[Crew chief Chris] Gayle did a good job of making some adjustments to our car, and it helped me.  It helped me definitely on the front side of a run, for the first 20 [laps], and I don’t think it hurt me from there on to the end of the race.

“But Larson was just better than us.  He could close and close and close.  Lapped traffic—they were really nice to me.  I think they screwed him up a couple of times.  So I kind of appreciated those guys.”

As Larson kept building momentum with Busch clearly in sight, he just couldn’t avoid the lapped traffic that kept him running high and low losing ground to Busch before finding a clearer way to his runner-up position. 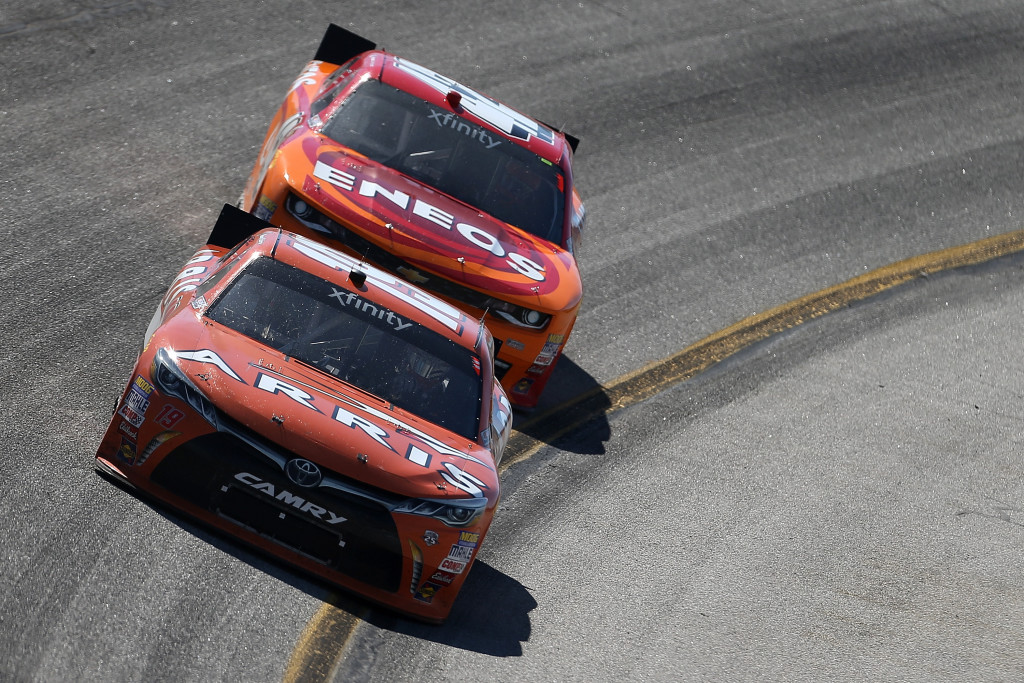 Third place finisher was last year’s Truck champion, Erik Jones, who qualified on the outside pole.  On the start, Jones jumped the green flag having to serve a penalty with a pass through on pit road recovering to finish third.  Fourth place was Paul Menard followed closely by Ty Dillon, using a pit strategy of adding new tires and fuel to jet him from 11th to fifth in the final outcome. 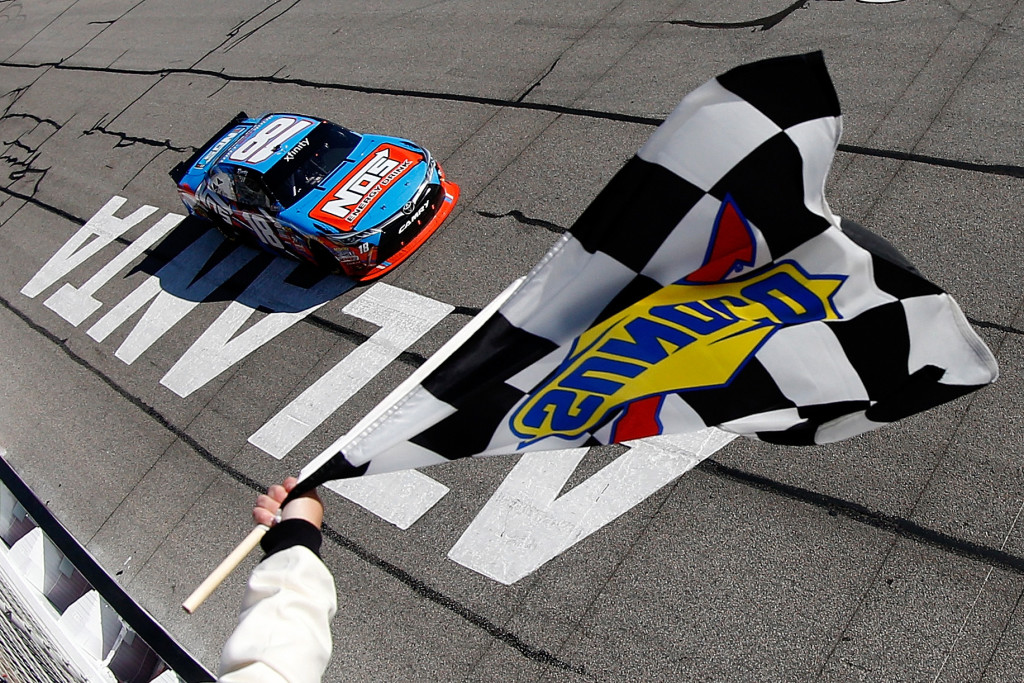 The average speed for the Heads Up Georgia 250 was 137.065 mph with five caution flags for 21 laps.  There were five lead changes among four drivers with Kyle Busch out front for 119 laps.

The next NASCAR Xfinity Race is the Boyd Gaming 300 at the Las Vegas Motor Speedway next weekend on March 5, airing on FOX Sports 1 at 4 p.m. EST.