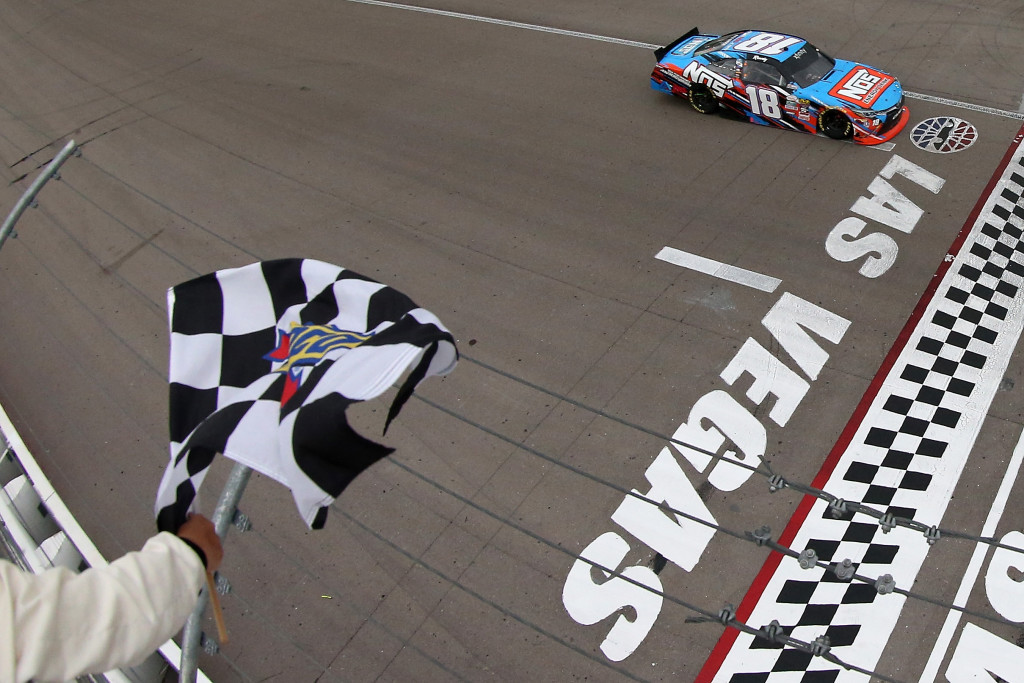 Kyle Busch and the rest of the Joe Gibbs Racing NASCAR Xfinity teams gambled on fuel mileage near the end of the Boyd Gaming 300 at Las Vegas Motor Speedway, coming out with a trifecta resulting in a winning 1-2-3 finish.

Busch, a native of Las Vegas, clearly had his hometown race in hand leading 199 of the 200 laps, was being chased by the JGR Toyotas of Daniel Suarez and Erik Jones in the latter stages, but couldn’t catch the now 78-time Xfinity winner.

By doing so, Busch was able to check off the Las Vegas Motor Speedway as one of previous tracks he had never won on becoming victorious for the first time in 12 tries on the 1.5-mile oval and in doing so, surpassed the separate mark during the race of leading more than 16,000 laps in the NASCAR Xfinity series.

“Suarez was definitely faster than us when he got a clean track,” said Busch keeping Suarez in his rear view.  “If roles were reversed, he would have been pulling away from me and I wasn’t going to be able to catch him.  All in all, just a great day for us being in one, two, and three and for me to get a victory here in my home town, check one off the list — that’s pretty awesome.”

With his second place finish, Suarez now assumes the top spot in the Xfinity points standings by three over Elliott Sadler after the completion of the first three events.

“When you see someone that much faster than you are, we know we have to try harder,” said a disappointed Suarez.  “I need to keep working, trying to find a little more speed from the car and next time have a shot at a win.” 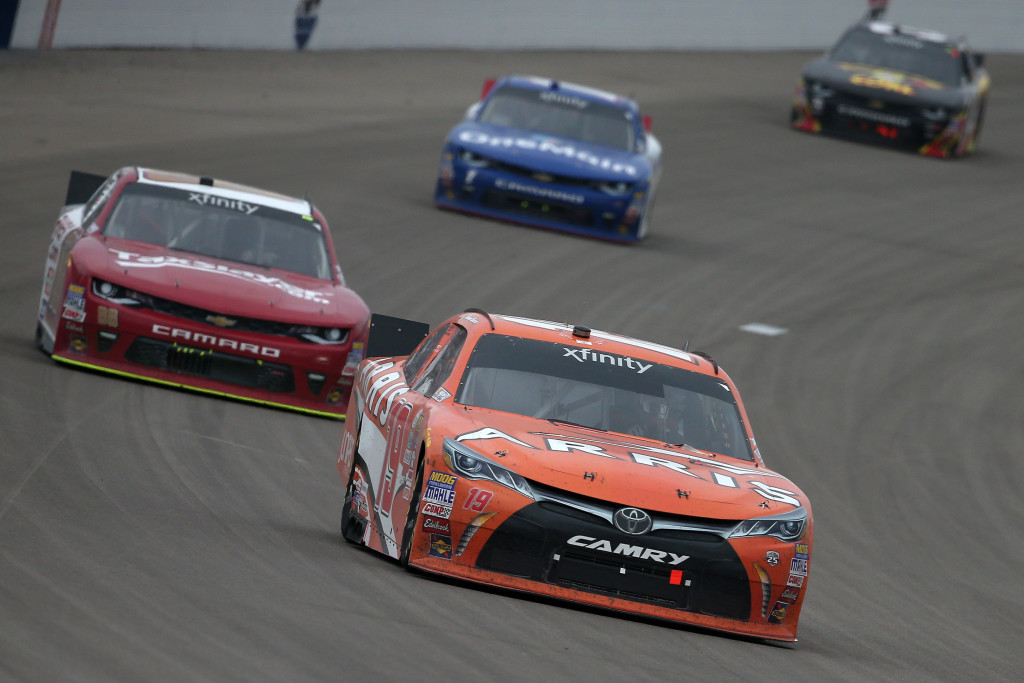 Busch’s JGR teammate, Erik Jones, occupied the front row at LVMS along side of the pole-winning Busch for the second straight race.  After accidently jumping the start in Atlanta last weekend, Jones again had another array of setbacks after pitting on lap 55 for a routine pit stop.  Taking into account, his stop was quick, it didn’t take NASCAR long to come over the radio charging him with exceeding the 45-mph speed limit.  After coming in to serve his first penalty was once more charged with speeding and ended up losing two laps in the process, falling back to 23rd position.

“I wasn’t even close to the blues (lights on the tachometer),” said a frustrated Jones telling his crew over the Car No. 20 radio.  “I never even touched ’em.”

Jones raced for 30 circuits, two laps down using the cautions to gain track position, managing to get back on the lead lap with 60 to go.  “We put ourselves in a hole and had to fight all race to get back in position to have a shot at it.  I burned up my tires fighting through traffic and settled for third.” 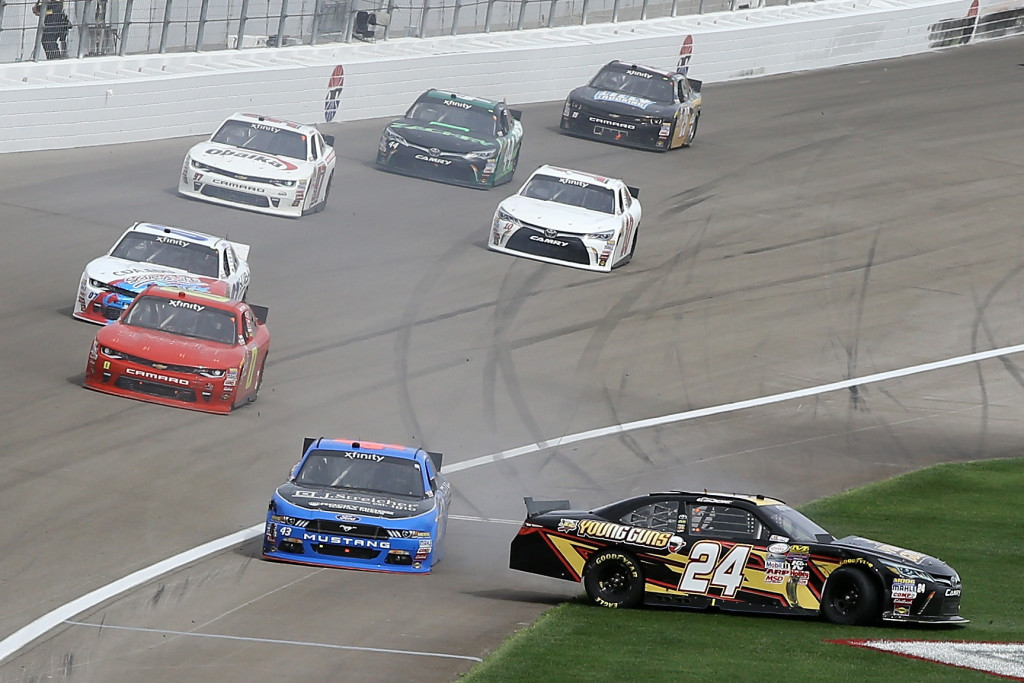 It was Darrell Wallace, Jr., Justin Marks and Cody Ware escaping injury in the biggest mishap of the day after a heavy crash that brought out a lengthy red flag after 135 laps.  Ware spun up to the top off turn two, coming to a stop right before Wallace ricocheted off Ware’s front end eventually tangled with Marks after the incident, spreading plenty of debris and fluid in the area.  All drivers were checked out and released after the scary crash from the speedway’s Infield Medical Center.

Rounding out the top five in the race after the JGR Toyota fleet of Busch, Suarez and Jones were Chase Elliott and Austin Dillon. 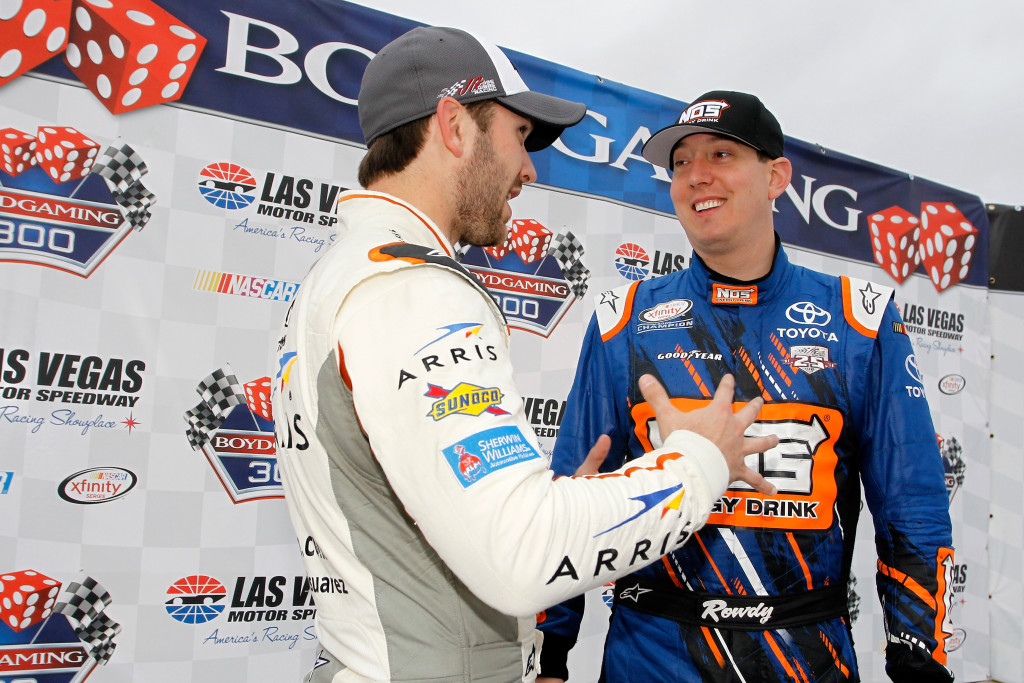 The next NASCAR Xfinity race is next weekend at the Phoenix International Raceway for the running of the Axalta Faster Tougher and Brighter 200 on Saturday, March 12, airing on FOX Sports 1 at 2:30 p.m. EST.