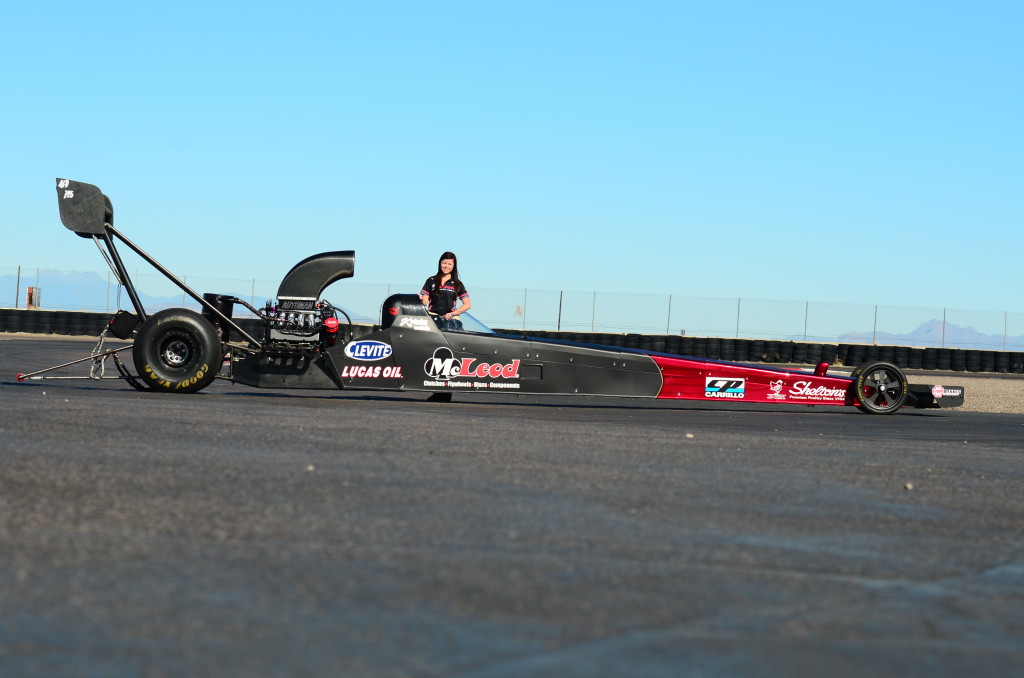 Krista Baldwin comes from a long line of racers, and the young driver already has a number of years of experience under her belt, but this coming weekend she’ll make her debut on the NHRA national stage in her Alcohol Fuel Dragster in the NHRA Lucas Oil Drag Racing Series.

She was kind enough to take time from both her job at McLeod Racing, and her race prep to chat with RacingJunk.com about her upcoming season, and the long legacy of racing that she’s a part of.

RacingJunk: What class and series do you race in?

KB: I am currently running the Top Alcohol Dragster class in the NHRA Lucas Oil Drag Racing Series. I run a A/Fuel Dragster which is injected Nitro. These cars cover the quarter in 5.2 seconds at 270 mph. 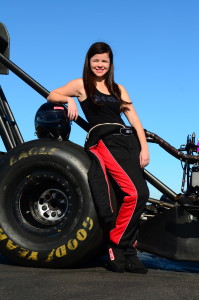 RacingJunk: How did you get started? What’s your background in racing?

KB: Well my grandfather is the legendary drag racing pioneer, Chris “the Greek” Karamesines. He was the first person to break the 200 mph barrier in 1960 with a 204 mph run at Alton, IL. He still drives Top Fuel Dragster in the NHRA Mello Yello Drag Racing Series. He is the oldest, licensed Top Fuel pilot at the ripe age of 83 years old. But he is not the only person in my family who raced Top Fuel Dragsters.

My late father, Bobby Baldwin, began his Top Fuel career in 1988 out of Southern California. He grew up in Pomona so he would watch the drags when they came for the WinterNationals and World Finals at Auto Club Raceway. He drove Top Fuel up until his unexpected passing in September of 2001. He suffered from a brain Aneurism. I was 8 years old when he left, but I remember him and my grandfather racing each other. My mother, Paula, says when I was little in the tow vehicle I would always say, “Mommy! Mommy! Daddy go fast!” It’s safe to say that I have nitro running through my veins. I practically grew up at the racetrack watching my family members make their way down the track in these monster of machines. I knew when I was little that I wanted to drive. In 2012, the summer after I graduated high school, I was approached to drive a front engine dragster in the Nostalgia Eliminator 1 class. These cars travel the quarter mile at 7.60 seconds at 180 mph. When the first time I put on that helmet to make my licensing passes I knew this is exactly where I needed to be. In the summer of 2015 I licensed in the A/Fuel dragster of Anthony Dicero. I participated in what Dicero calls his Nitro University. I made the license requirements in just three runs, I am one of only 4 other people who did in just the mandatory 3 runs, one of which was Top Fuel driver Richie Crampton. My quickest pass during the process was a 5.48 at 252 mph.

RacingJunk: What drew you to it and what keeps you doing it?

KB: Just the adrenaline. I absolutely love watching these cars go down the track as much as I love driving them.  It is just mind boggling watching Top Fuel and seeing them leave the line at 4-5 G’s which is more than the space shuttle. I also love my racing family out in the pits. Growing up in this world with two men who drove Top Fuel, I have made my own racing family who stick behind me and support me through what I am about to embark this year. It’s literally like seeing your favorite cousins every week and hanging out with them, everyone is so close. I keep doing this because I have the desire and passion to do it. I also do it because I feel like I am living out both mine and my father’s dreams of driving a nitro car. It’s interesting when I get in the car and I am strapped in, an overwhelming calming effect takes place and during this I take the time to say some words to my dad.

RacingJunk: What is your favorite part of racing and the race industry?

KB: My favorite part of racing is when the cars start up. Just sitting in the cockpit while they start these ground trembling cars is amazing. I love how the car sits and idles on the starting line. When these things start up, we mean business. I’m as much as a fan as I am a driver. My favorite part of the industry is the people you get to meet. Drivers you watch as a kid are now becoming my friends and I get to meet some of the legendary pioneers of the sport like Jimmy Nicoll.

RacingJunk: What are the biggest challenges you face as a racer?

KB: As a racer, the biggest challenge is being able to practice before a race. When I was in my front engine dragster, I was attending college, had a part time job and two racing internships so it made doing test laps a little difficult. Now in the A/Fuel dragster, I’ll have more of an opportunity to test the car before I make a qualifying pass. Another difficult thing is putting together a sponsorship package. Although it’s difficult I still love working the Marketing side of drag racing and making a plan that compliments both the team and the company.

RacingJunk: What words of advice or inspiration would you offer to any young racers out there?

KB: Go to college! That is the number one thing I could tell someone. Yes, you could be the best driver out there and win races, but you still need something to fall back on. I definitely made it work with two internships, part time job, full time Dean’s list student, and driving. It’s difficult, but if you really want something you make the effort to make it work. I also graduated a semester early in December of 2015.  Almost every weekend during college I was traveling to races to work with Paul Lee and Competition Plus but I wouldn’t have changed it for the world. 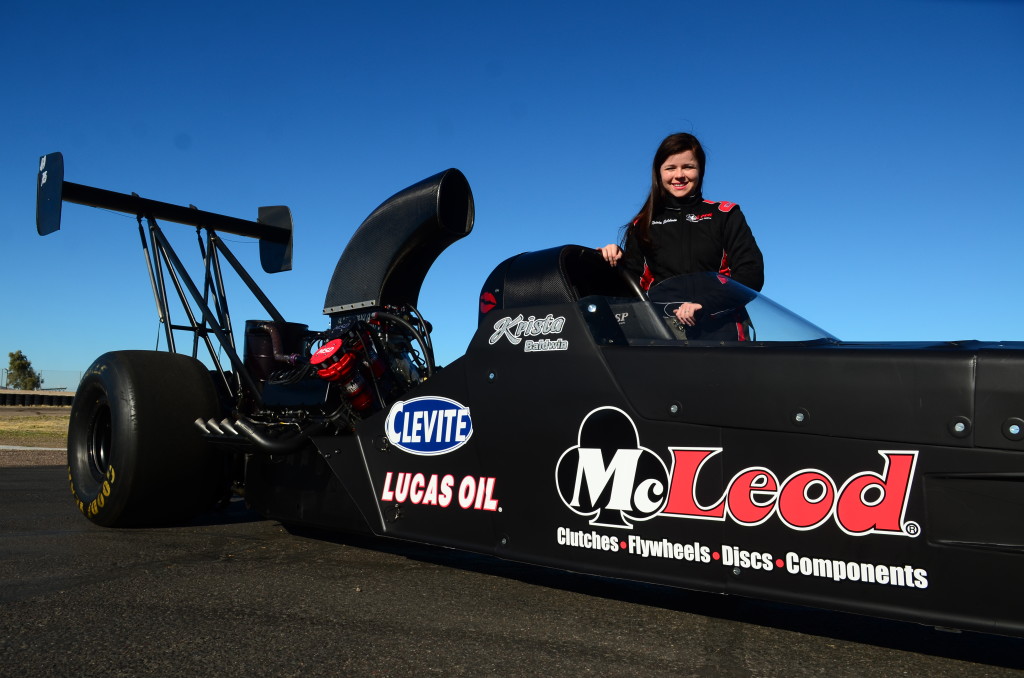 RacingJunk: Do you have any racing heroes or mentors who you look up to or who have helped guide you?

KB: Well, of course I look up to my grandfather and father and I aspire to be like them. They were the “other” teams in that we didn’t have a big sponsor and tons of money. They did it because they loved it. I look up to almost every driver in drag racing. These are people who I grew up watching and have idolized over the years. Everyone has something different to bring to the track and I love how diverse this sport is.

RacingJunk: Do you have a crew, and if so, how much input do you have in the mechanical decisions and racing strategy?

KB: Yes I do have a crew. There are only a couple of them, but they get the job done and I know I have a safe ride everytime I strap in. Anthony Dicero is the one calling the shots as crew chief and car owner. He has been around drag racing for years and really knows how to get these cars down the track. Jake Sanders, son and crew chief of Mark Sander’s Mr. Explosive Nostalgia Funny Car, knows these cars inside and out. His experience is far beyond his years, but that’s why we have him. He’s one of the best. I help out with mixing fuel and packing the parachutes. As a team we talk about how they want me to drive the car or what to be prepared for. I am also very lucky to have Paul Lee, president of McLeod Racing and NHRA Nitro Funny Car driver, on my side. He has given me so much insight on driving. We even race each other on a porta tree and he gives me different scenarios of what might happen on the track. Drag Racing is like a big puzzle, the finish product only works if the pieces fit together.

RacingJunk: What are your goals for the season?

KB: Goals for this season are to learn as much as I can driving this 4,000 hp machine. Qualifying and winning rounds is also in the back of my mind like any other driver, but right now I’m focusing on how I can become a better driver. I have watched probably a million cars go down the track, but the game changes when you are the one going down the track. Another would be is to have fun. That’s why we are all out here because we love it and we have fun doing it.

RacingJunk: What’s the fastest you’ve gone and what’s your favorite thing to go fast in?

KB: The quickest e.t. I have posted is 5.48 and the quickest speed is 262 mph. I love both the front engine and rear engine cars. Both are completely different, but I will have to say it’s an incredible feeling getting down the quarter mile at 262 mph.

RacingJunk: When you’re not racing, what do you like to do?

KB: When I’m not racing, I am wishing I was racing. But I’m pretty sure every driver says that haha. I love to travel. I love exploring new places and flying to interesting locations. During my sophomore year of college I studied abroad in Athens, Greece for 6 months and that was one of the best experiences in my life.