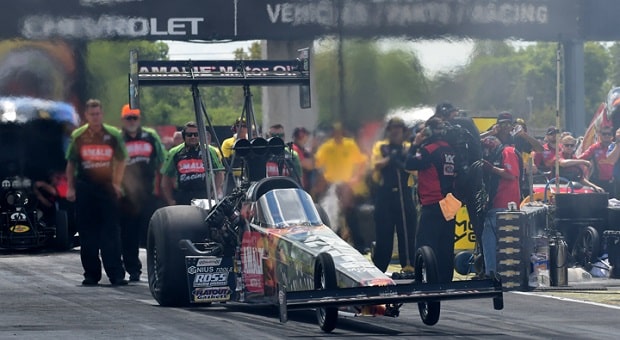 Weather willing, this weekend begins the six-race NHRA Countdown to the Championship playoffs to crown titleholders in Mello Yello’s Top Fuel, Funny Car, Pro Stock and Pro Stock Motorcycle classes. It all starts with the Dodge NHRA Nationals at Maple Grove Raceway in Mohnton, Penn. near Reading, renowned for its fast times and speeds on the dragstrip – and for its mud-bound trackside conditions.

The biggest question mark, then, is the weather as Hurricane Florence continues to change course as she hits the southeast coastal areas of the USA. Will it rain and turn the trackside area into a bog as is customary, or will the schedule-makers’ efforts to avoid what is customarily a rain-affected event work out for once?

No matter what does or doesn’t drop from the sky, every member of the NHRA community is on-site for one thing: the glory of hoisting a Wally trophy in the Winner’s Circle. The most recent winners at Labor Day’s Chevrolet Performance U.S. Nationals outside Indianapolis are primed to take on their nine foes in class, as all of them qualified for the Countdown, albeit not necessarily at the lead of their classes.

Terry McMillen’s emotional victory at Indy, only his second NHRA national class win, didn’t change his position in Top Fuel standings but certainly gave the driver momentum to challenge leader Steve Torrence, who has five wins in the first 18 races. Torrence didn’t have his best U.S. Nationals, exiting early, but his exemplary competitiveness in the “regular” season put him atop the standings with 1422 points to Clay Millican’s 1234 points.

Millican has two wins on the season, while eight-time champion Tony Schumacher has a single victory but plenty of round wins to go with his 1195 points. Double-race winner Leah Pritchett stands fourth (1170 points) while Doug Kalitta holds down fifth place, thanks to his single victory. Behind him are Antron Brown (1 win), McMillen (1), last year’s champion Brittany Force (1) and non-winners Mike Salinas and Scott Palmer. Salinas was the No 1 qualifier for the U.S. Nationals, allowing him to swap places with Palmer in the standings. 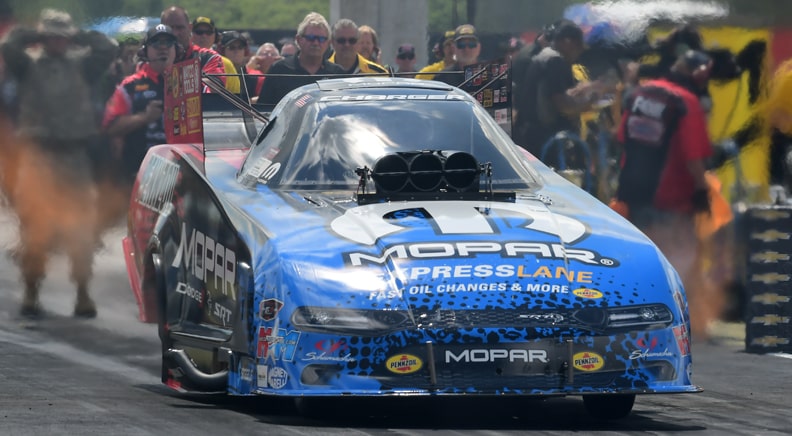 In Funny Car, points leader Courtney Force didn’t have the race for which she was hoping in Indy, yet retains No. 1 in her Chevrolet Camaro with 1457 points and four wins in the first 18 races. She’s hounded by Matt Hagan’s Dodge Charger SRT Hellcat, the three-race winner using Dodge’s newest body, which he debuted in Denver. Behind Hagan is Force’s teammate, reigning champ Robert Hight (2), followed by Hagan’s teammate Ron Capps, also with two wins on the season. 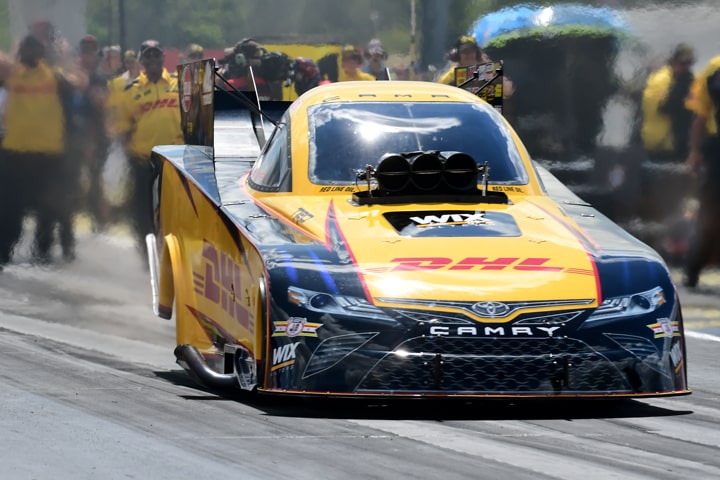 Indy’s back-to-back Funny Car winner, J.R. Todd brings his Toyota Camry to Reading in fifth place despite owning three victories on the season; he had been tied with Tommy Johnson Jr. for sixth, but that spot now belongs to Jack Beckman, by virtue of his two victories this year. Johnson Jr. and Shawn Langdon haven’t won yet this year, but each is hoping his Dodge Charger R/T or Camry will propel him to a win. Sixteen-time champ John Force (1) has ninth-place points while veteran Tim Wilkerson’s Ford Shelby Mustang rounds out the top 10 in the flopper class.

Indy winner Tanner Gray leads all comers in Pro Stock after earning five wins in the regular season. Despite having only a single victory, Greg Anderson is second, followed by Erica Enders (1) and her teammates Jeg Coughlin Jr. (3) and Vincent Nobile (2). Deric Kramer’s two wins on the year slot him in sixth place, while non-winners Drew Skillman, Jason Line and 2017 champ Bo Butner line up seventh through ninth. Chris McGaha’s two wins put the independent driver in 10th position in a class where all Countdown competitors are racing Chevrolet Camaros. 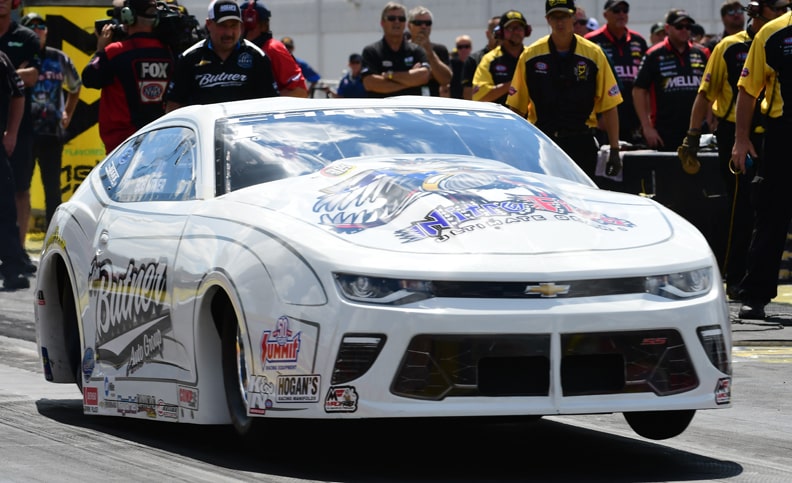 After 10 of the class’ 16 races this year, Pro Stock Motorcycle’s Eddie Krawiec (4 wins) holds down the top spot in class, the Harley-Davidson rider looking for his second championship in a row. Teammate Andrew Hines is second despite visiting the Winner’s Circle only as a member of Krawiec’s Vance & Hines winning team. Indy winner LE Tonglet (3) is third on his WAR Racing Suzuki, followed by fast master Hector Arana Jr. (1 win on his EBR Buell) and Tonglet’s team owner Jerry Savoie. 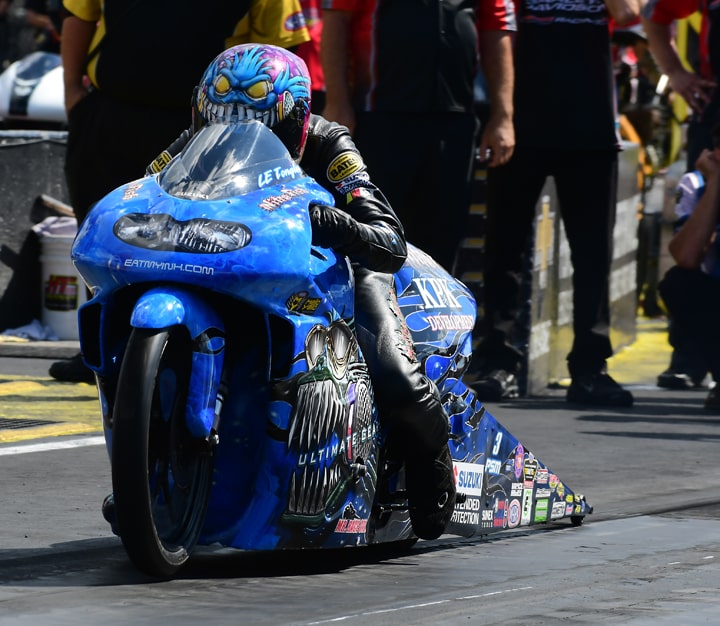 Matt Smith’s Victory has taken him to a single win, good for sixth place, while Suzuki riders Scotty Pollacheck and Steve Johnson are seventh and eighth. Angie Smith’s Buell put her in ninth place and three-time class champ Angelle Sampey, also on a Buell, stayed in the Countdown on the final day at Indy when Johnson made the cut, locking out Hector Arana.

There’s a full field of 16 cars each entered for Top Fuel, Funny Car and Pro Stock this weekend, while 19 Pro Stock Motorcycle racers are hoping the weather forecasts for cloudy conditions, temps in the mid-to-high 70s and less than 20 percent chance of rain are correct for all three days of racing. The remnants of Florence aren’t expected to enter the area until Monday but, as we all know, hurricanes have a way of changing course quickly. Hopefully Florence will stay her course and allow great racing to occur.