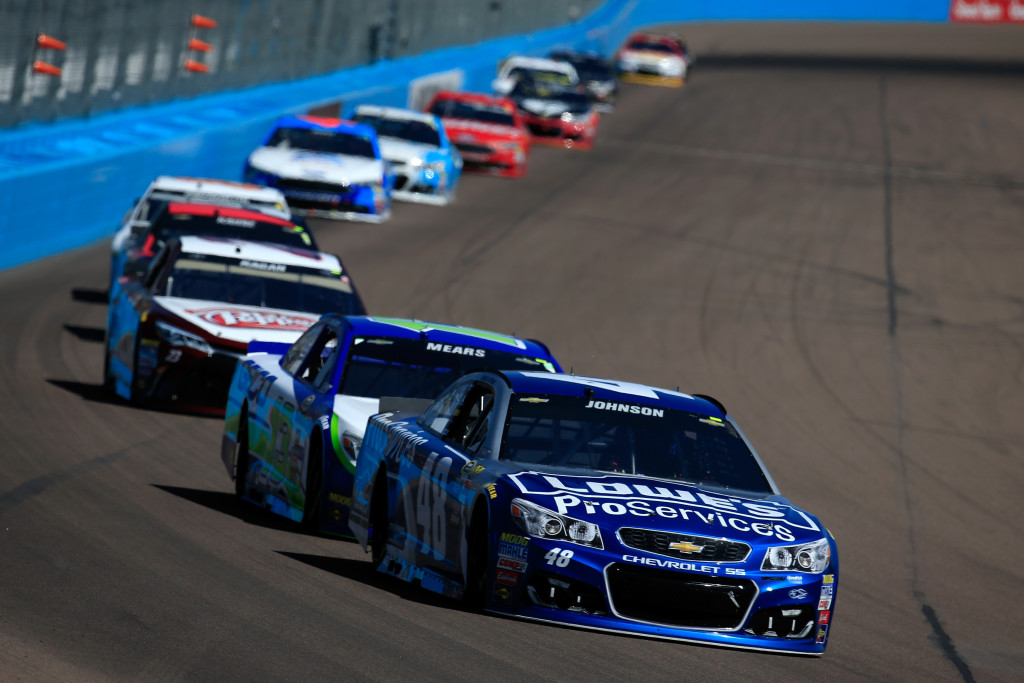 With his eight wins at Phoenix International Raceway, Kevin Harvick has been dubbed by FOX Sports announcer, Mike Joy, the ‘Cactus King’ and rightfully so, after again conquering the Good Sam 500K NASCAR Sprint Cup series race on Sunday afternoon in what turned to be the closest finish ever at the D-shaped one-mile oval in the desert.

It was a NASCAR overtime period brought on by Kasey Kahne stalling on the track after hitting the wall and producing the fifth yellow flag with six laps to go.  Harvick, the leader pulling away, didn’t want to see the caution fly, having the race seemingly at ease and going his way. 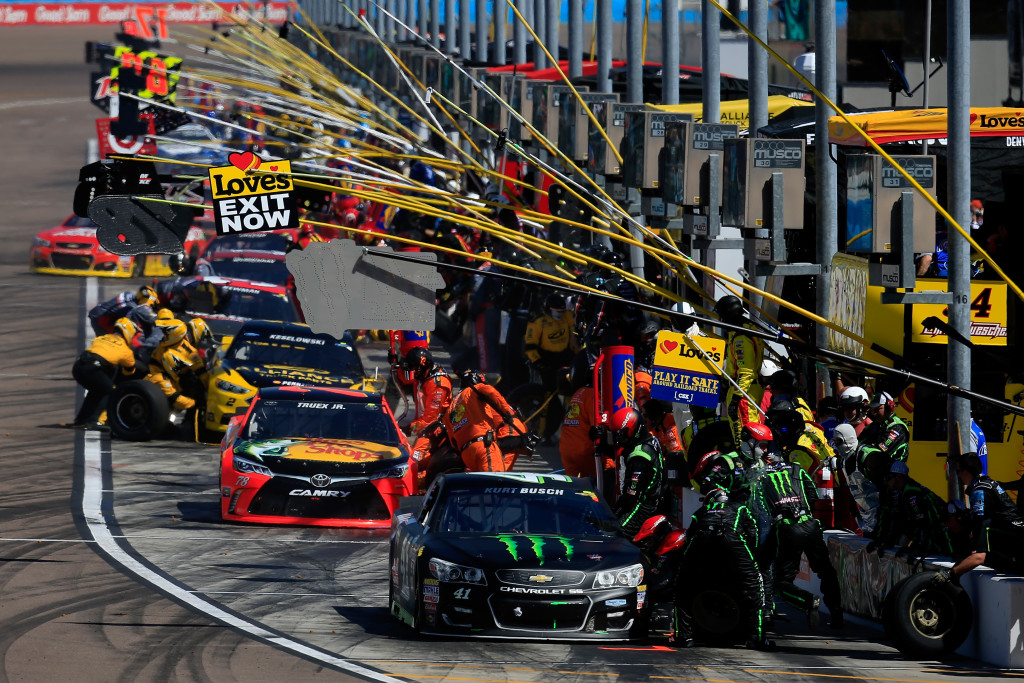 It came down to who would pit and who wouldn’t.  Harvick, along with Earnhardt, Jr. and Austin Dillon stayed out while fourth position and on back came in for fresh rubber and fuel, leaving this group on older tires.  With the field bunching for the two-lap green-white-checkered sprint, Harvick sails off into the lead with Carl Edwards jumping from fourth to second, tailing Harvick.

On the white flag lap, Edwards rolled in deep, traveling into turn one and building up momentum for his assault on Harvick, catching him just in time coming off turn four.  Edwards used a push, shove and a nudge in Harvick’s left rear, moving him up the track allowing Edwards entrance into the picture pulling up alongside.  They touched fenders once, twice with Harvick prevailing over Edwards by one-hundredths (.010) of a second, in a photo finish giving Harvick his 32nd Sprint Cup victory. 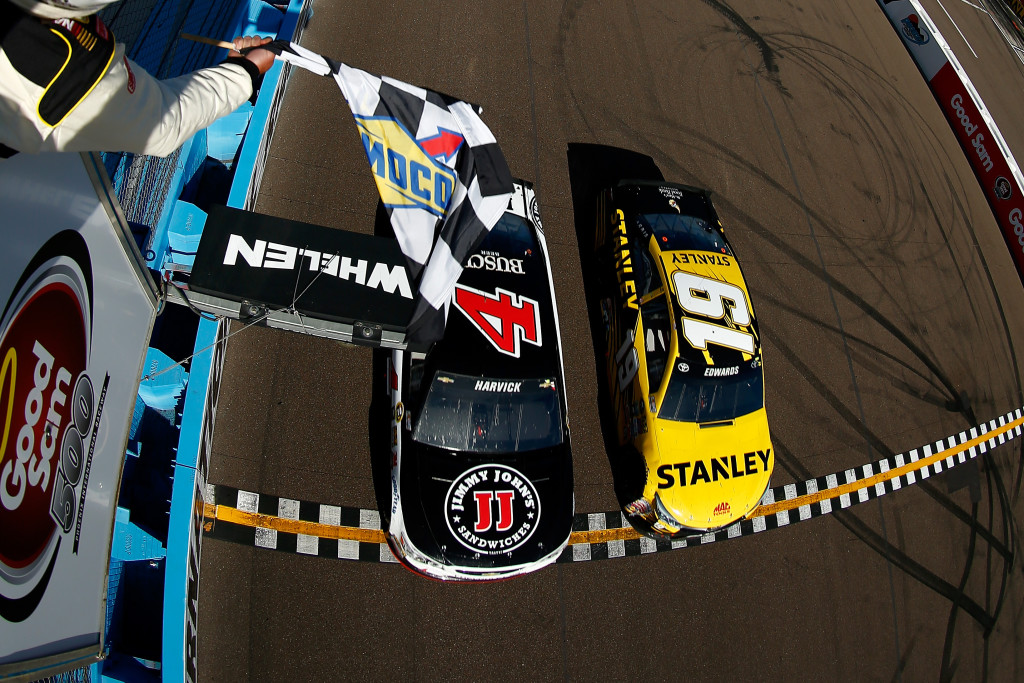 “I knew he was better in three and four and that was not the car I wanted to see behind me,” sighed a relieved Harvick in victory lane.  “I knew I could beat him down there and I tried to protect the bottom in [turns] three and four and just missed it with all the rubber build up on the tires.  All in all, I knew I was going to be on defense down there and got up too high and wasn’t able to stay on the bottom like I wanted to do.  Then he got into me, like he should have.  I knew I needed to get a good run off the corner and have to get to his door.  It worked out ‘just barely’.

Edwards, on his fresher tires, advanced hard and fast, catching Harvick and tried as he might, was just four inches shy of winning.

“I have should have wrecked him,” said a laughing Carl Edwards describing what else could he have done to beat Harvick.  “We made him work for it.  Those guys did a great job all day and they hung on with their tires, but we were faster.  I figured we’ll just move him out of the way and I just didn’t move him up far enough.  Then he got up to my door and I was trying to time it because he was going to beat me, so I tried to sideswipe him before he got there, but I needed to be ahead of his front tire.  I wish we could have won that thing.”

Pole-sitter, Kyle Busch, took off in the early stages of the race, dominating the field leading twice for 75 laps before experiencing handling problems that left him in fourth place at the end of the race. 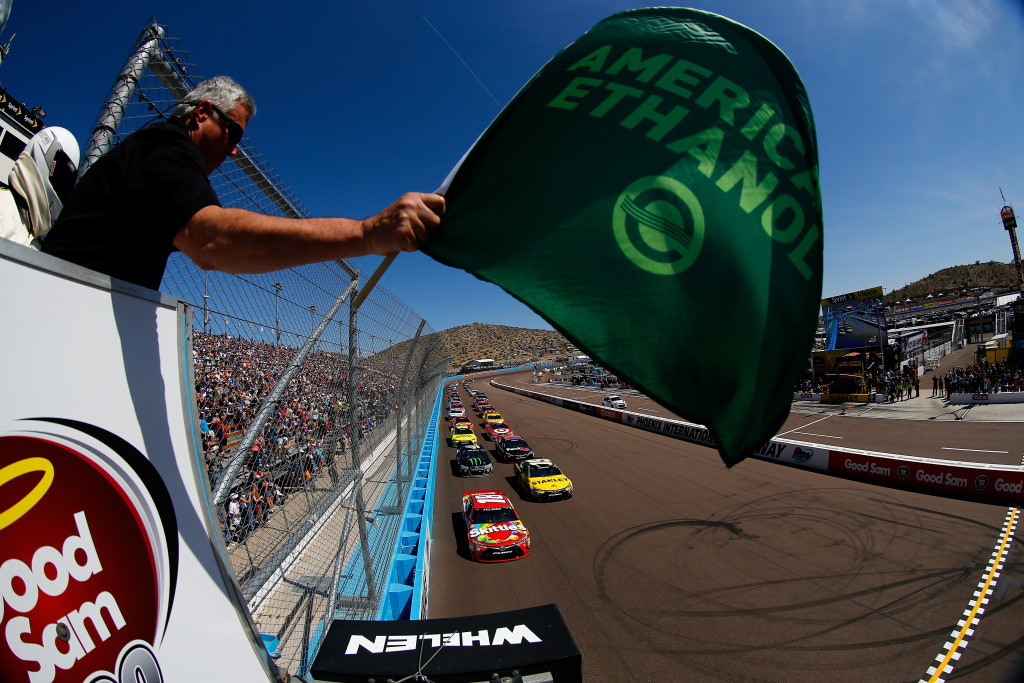 “We had a really good car,” said Busch.  “It was good enough to lead a bunch of laps early in the race, but as the track continued to ‘rubber in’ as the runs got longer, we seem to fade a little bit more and more each time,  So, we definitely need to work on some long run stuff.”

Crossing behind the front pair of Harvick and Edwards was Denny Hamlin overcoming an early pit road tire issue to finish third, Kyle Busch was fourth and Dale Earnhardt, Jr. in fifth.

The win propelled Harvick into the Sprint Cup Chase, filling in yet another seed joining Hamlin, Jimmie Johnson, and Brad Keselowski as the early frontrunners in contention for the championship. 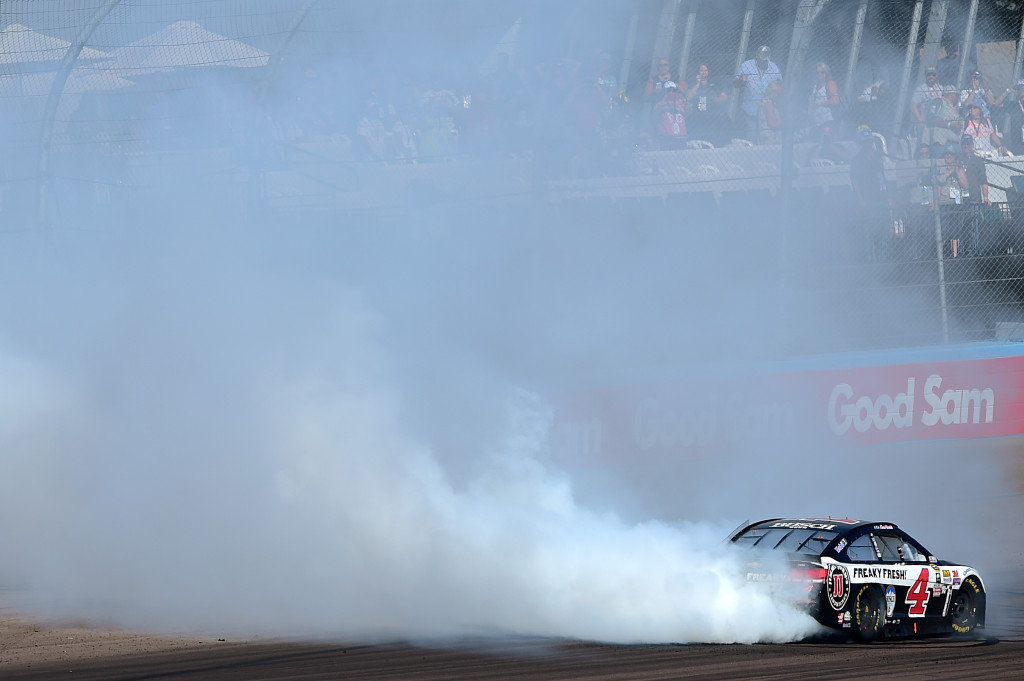 The Good Sam 500K had an average speed of 113.212 mph after being slowed down by five caution flags for 30 laps.  There were seven lead changes among four drivers with Harvick leading the most at 139 laps.

Up next for the NASCAR Sprint Cup Series is the Auto Club 400 at the Auto Club Raceway in Fontana, CA, on Sunday, March 20 airing on FOX network at 3:30 p.m. EDT.