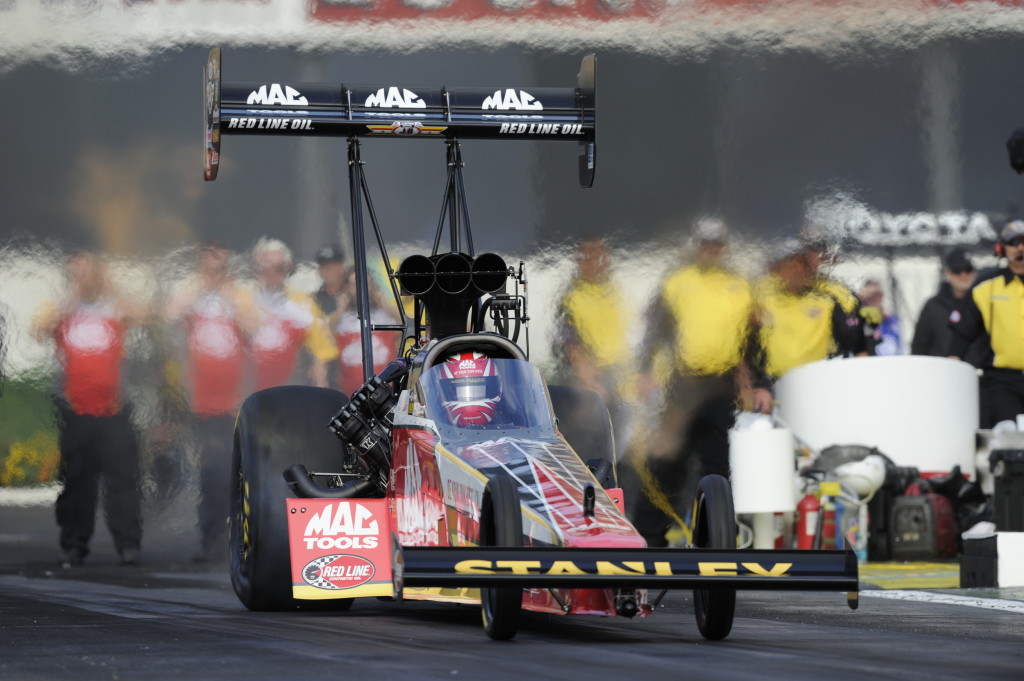 In his 17 years of driving a NHRA Top Fuel dragster, Doug Kalitta has never had a season start like 2014.

In his first five races, the Ypsilanti, Michigan resident has reached the final round in four of the first five events, highlighted with a win at the coveted Amalie Oil Gatornationals.

“Yeah, it’s certainly been fun,” said Kalitta.  “We’ve been building up a lot of momentum and everybody is happy on the team with what’s going on.  Now we can go to each one of these thinking we can get the win on any weekend.  Having a shot at it week in and week out is pretty exciting, so we’re all just trying to do our best to make it happen.”

It started in Dallas in the midst of the 2013 NHRA Mello Yello Countdown to the Championship when Kalitta won a race tying him with Shawn Langdon. That race kicked-off  an incredible run of performance that has him back to No. 1 in the points standings.

“We got that win in Dallas last year and since then Jim (Oberhofer, crew chief) and Troy (Fasching, asst. crew chief) and the rest of the guys have played such a big part of the set up we run and we’ve been trying to stay fairly close with that,” said Kalitta. “That’s one thing about tuning these cars, they’re always this new part, a little bit better blowers, better heads;  it’s constantly evolving.

“I have to give a lot of the credit with my car to JimO.  He’s surrounded himself with real good guys like Troy, who’s Jim assistant on the car and between the two of them, they’re making good decisions.  We’re able to go up to the line to make the car do what they’re trying to do a little more consistently now.   I’m proud of those guys.”

Showing their confidence in their tune up for this season, the Team Mac Tools Kalitta Top Fuel bunch didn’t touch the setup from their final round appearance at Pomona in 2013.  They didn’t test in Palm Beach and brought the car out to Pomona for qualifying at the Winternationals and grabbed the No.1 spot on the qualifying ladder (3.713 seconds) and again reached the final round before being defeated by Khalid alBalooshi in the season-opener.

The only final he has missed this year has been in Phoenix, losing in the semi-finals to Antron Brown. Kalitta currently leads Brown by 25 points in the standings.

“Hopefully, after this kind of start, it will be a good year for us,” said Kalitta, who has been the runner-up in the Top Fuel points three times (2003-04, and 2006).  “We intend on keeping it that way.  It’s really exciting to be a part of it right now.  We have a lot of confidence and have momentum on our side with everything going on.  That puts a little extra skip in your step.”

The cool, calm demeanor that Kalitta shows on the outside is matched by the intensity on the track that makes him a formidable opponent.  He has made the Countdown for the last six years, but will 2014 be his year?

“I believe it will,” he said.  “I’m real excited about our chances this year and I’m surrounded by a great team, a great sponsor in Mac Tools and a great car owner.  So, it shouldn’t be any good reason not to take the title this year, I can tell you that.”

It’s not just Doug’s dragster that is running better.  The entire Kalitta organization has stepped up the program.

Kalitta has one win, and Alexis DeJoria is in the top three in points with two 2014 wins in her Kalitta Racing Patron XO Café Funny Car.

“Jim Oberhofer has been nurturing this thing for a long time and he’s the one over there at the shop all day, every day.” smiled Kalitta. “Obviously we rely on him a lot to oversee what’s going on.   It was Jim and Connie’s (Kalitta, car owner) decisions of who they put in charge of various things.  I really believe that through those two working together particularly to get Tommy Delago in place there with Alexis DeJoria’s car with his right hand, Glen (Huszar) working along with him was a great move.

“Nicky (Boninfante) and JonO (Oberhofer) are working with one of the most well rounded guys in Del (Worsham).  So we put some good people in place.

“They all realize Connie’s passion for the sport that we’re in.  We’re all are just trying to obviously build each team the best that we can to go along with the people already there in place for a couple of years now.  It’s great to see every one gel better. We’re all a bunch of hungry ‘Bounty Hunters’.”

With the great start this season, Doug Kalitta has a big confidence boost going into Sunday’s eliminations knowing that crew chief, Oberhofer has checked and rechecked all things on the car and is prepared for  raceday.

“It’s huge,” said Kalitta.  “He’s been there for a long time and a big part of the stuff with the whole effort there.  It’s definitely nice to have him on my car tweaking on it all the time.  I couldn’t have asked for a better situation.  His daughter, Ashley, has been a part of a lot marketing type of things, so he’s bringing along another generation as well.  They make a good pair, for sure.”

Ashley Oberhofer heads up their social media and the response from the fans has been tremendous.  The Kalitta Motorsports Facebook pages have over 50,000 ‘Likes’ and their @teamKalitta on Twitter has nearly 18,000 followers.

“We’ve got some good people in that,” Kalitta said.  “Todd Myers has been very instrumental on our website.  Ashley has been a vital part of all the daily stuff you have to do on Facebook and Twitter.  I’m real proud of what she’s doing.  She catches on quickly.”

Now as Kalitta goes into the O’Reilly Auto Parts Springnationals this weekend, his 34 Top Fuel wins is just one short in the win column that would tie him with the biggest name in the business.

“That would be Big Daddy (Don Garlits),” said Kalitta.  “He’s the man.  I grew up watching him and Connie race.  He was the force to deal with all those years.  That will be a proud moment and I hope we get to that spot real soon.  He’s someone I have a lot of respect for and it’ certainly an honor to at least tie him.  That’s our goal for sure in Houston.

After three runner-up points campaigns in 2003-04 and 2006, 2014 is proving to be his year to reach the summit of the NHRA Top Fuel points standings.

“Obviously for me and my family it would be the best.  Connie has been a part of building a lot of the champions in the NHRA.  It would be a proud moment for our whole family.  So far, this is definitely one of my best opportunities and I’m going to give it my all.”