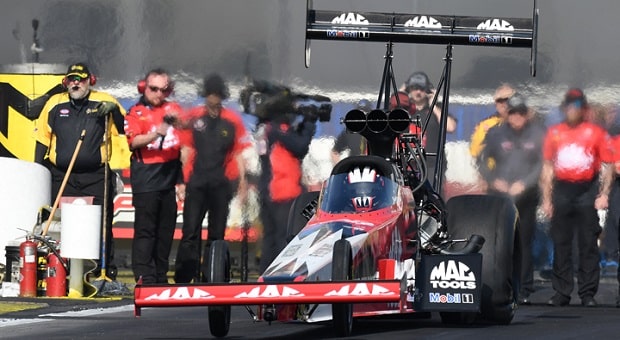 NHRA makes history at its most memorable track, Auto Club Raceway at Pomona. It’s a home dragstrip for the sanctioning organization, born in 1951 to get racers off the streets and onto the tracks.

This past weekend’s 60th annual Lucas Oil Winternationals was held under unusual circumstances. It is customary for previous years’ champions to receive a commemorative jacket and ring for their season-long achievements, to bask in the appreciation of fans in attendance for the start of the year. Robert Hight received his Funny Car winnings for the third time, as did Erica Enders in Pro Stock, again for the third occasion. Andrew Hines flew in from Indianapolis to pick up his sixth Pro Stock Motorcycle goodies, even though his season doesn’t begin until race No. 3 in Gainesville, Fla.

Steve Torrence was absent from the festivities, his team protesting his penalties for putting hands on Cameron Ferre after the first round of Top Fuel eliminations last November. As his team owner Kay Torrence declared in a press release, the only reason the team didn’t come to Pomona – after having an excellent Phoenix test the week before – was “NHRA’s lack of urgency in acting upon the team’s appeal of sanctions” related to the incident at top end.

Torrence had been fined $25,000 and told to take anger management classes after the blow-up. Because of Torrence’s absence, Scott Palmer (Top Fuel) and Jeff Diehl in Funny Car stayed home, as both depend on technical alliances with the Capco team. Oh, and Steve’s dad Billy, who won last year’s Phoenix race to start off a partial season that saw him earn fifth place in the final 2019 Mello Yello Top Fuel standings, didn’t come to Pomona, either.

On Monday, the CAPCO team’s release noted, “We didn’t want any unresolved issues going into the new season, but we had trouble getting them (NHRA) to respond to our letter of appeal.” Torrence’s team appealed the two stipulations set up by NHRA, the monetary fine and the anger-management classes. “Torrence Racing took issue with the NHRA’s apparent hypocrisy in assessing penalties for what it deemed conduct detrimental to the sport – and then using video clips of that very same behavior, ostensibly to attract new fans and viewers.”

Steve Torrence never disputed the monetary fine and, in fact, quickly accepted all responsibility for his actions. “The incident itself is one that both Torrence and Ferre publicly have said they wish to put behind them as both pursue their dreams in racing,” the Torrence release continued. “However, the NHRA’s continued use of the edited clip will make such a course exceedingly difficult.”

The CAPCO Contractors team and their ancillary squads are all expected to be back in Phoenix less than two weeks from now, but the result of their absences was a 13-car field in the dragster category at Pomona. It was a strong field to be sure, and last year’s third-place finisher, Brittany Force, laid down the top ET in qualifying – 3.657 seconds (334.32 mph) – to show her fine record in 2019 was no fluke. Neither was Austin Prock’s eighth place season-long result; the sophomore racer, driving the second John Force Racing Top Fuel entry, was second in qualifying and went to the finals, where he lost to fifth-qualified Doug Kalitta in the final round.

The competition on Sunday was heated, but that was the only heat in Pomona, which had two beautiful qualifying days and had an hour-early start to Sunday eliminations under threat of rain. There was a spit or two of moisture as the first eliminations of the year went along, but the competition went well – especially for Kalitta, who earned his third straight Winternationals Wally winner’s trophy and his third straight at this track, with a blast of 3.698/330.23 in the final round against a tire-spinning Prock.

Kalitta wasn’t the only driver setting records over the weekend. All three winners from last year’s World Finals – held at this same track – earned Wally trophies, giving Kalitta, Funny Car’s Jack Beckman and final-year Pro Stock racer Jeg Coughlin Jr. a reunion at the post-race Winner’s Circle ceremonies, held for the first time on the racetrack, about 100 feet up from the Christmas Tree at the starting line.

Because of the short field, both Brittany Force and Austin Prock had bye rounds, hers in the first round and his in the second, a situation Force appreciated as she experienced tire-shake almost from the tree; Prock had a boomer of a lap in his second-round bye (3.678/330.96). Kalitta disposed of Force in the semifinal round and Prock placed Leah Pruett on the trailer. Prock posed no competition for Kalitta in the finals, going up in smoke almost from the hit. 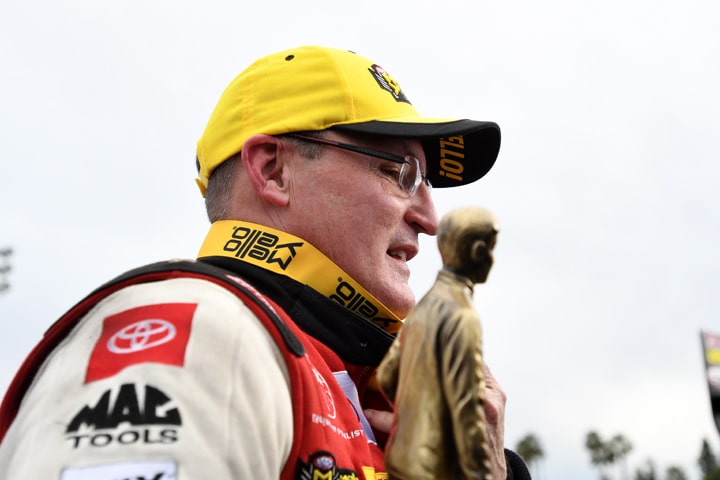 After taking his 48th Top Fuel trophy, Kalitta noted, “There was a lot of close racing today – you’ve got people up there trying to tear the tree down on you, so it makes you a little bit nervous. My team busted their tails today; we tore up a few parts but it was all good. To win the 60th Winternationals is pretty special. Connie (team owner Kalitta) was here at the first one and he’s here with us. I couldn’t be happier for him.”

It might have been a short field, but in Kalitta’s estimation, “Everyone out here just keeps stepping up their game. You can see it in the performances of these cars. It’s going to be a tough year, but I’m really looking forward to it. My guys,” led by Rob Flynn, “are all hungry and just real glad that we were able to get one of the Kalitta Motorsports cars into the Winner’s Circle today and get the season kicked off right. Winning the first race takes a lot of pressure off. Now that we’ve got that win behind us, we can just build on it.”

Kalitta gets the chance for a two-for to start the year at Wild Horse Pass Motorsports Park in just over a week’s time, when the second race – of 24 total for the Top Fuel and Funny Car categories – takes place February 21-23.