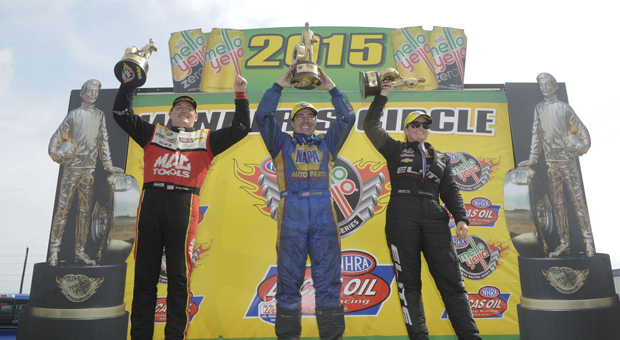 It was Doug Kalitta, Ron Capps and Erica Enders-Stevens taking home the NHRA Lone Star Wallys before a live television audience on Sunday at the O’Reilly Auto Parts Spring Nationals at Royal Purple Raceway in nearby Houston, Texas.

Not since the 1992 season have the first six Top Fuel races had such a range of winners and Doug Kalitta kept that streak alive when he kept Tony Schumacher from victory in the Top Fuel Finals.  Ron Capps beat out his Don Schumacher Racing Funny Car teammate, Jack Beckman, for a win; and hometown-hero Erica Enders-Stevens dazzled her loyal fans by fending off fellow Texan Chris McGaha in an all Chevy showdown. 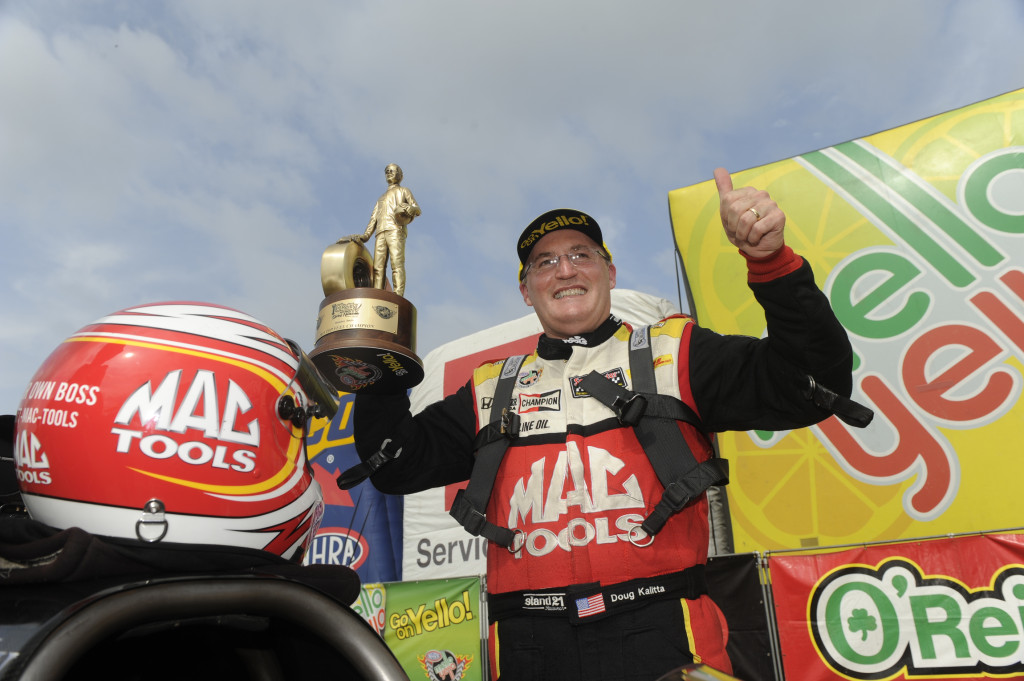 Doug Kalitta outran his longtime rival Tony Schumacher in the final round to earn his 36th career victory and first win since last August in Seattle.  Kalitta, who passed “Big Daddy” Don Garlits on the all-time Top Fuel wins list with the effort, drove his Mac Tools dragster to a winning time of 3.820 seconds at a speed of 324.98 mph while Schumacher’s U.S. Army machine slowed near the finish line with a 4.014 at 225.60.

“I’ve had a couple dry spells,” said Kalitta, who beat Troy Buff, Larry Dixon and top qualifier Spencer Massey in the opening rounds.  A warm, tricky track meant both Massey and Kalitta went up in smoke.  “It’s one of those deals where you never know when you’re going to win one of these, so you have to appreciate the opportunity and appreciate these wins when you get them. It’s a good feeling.” 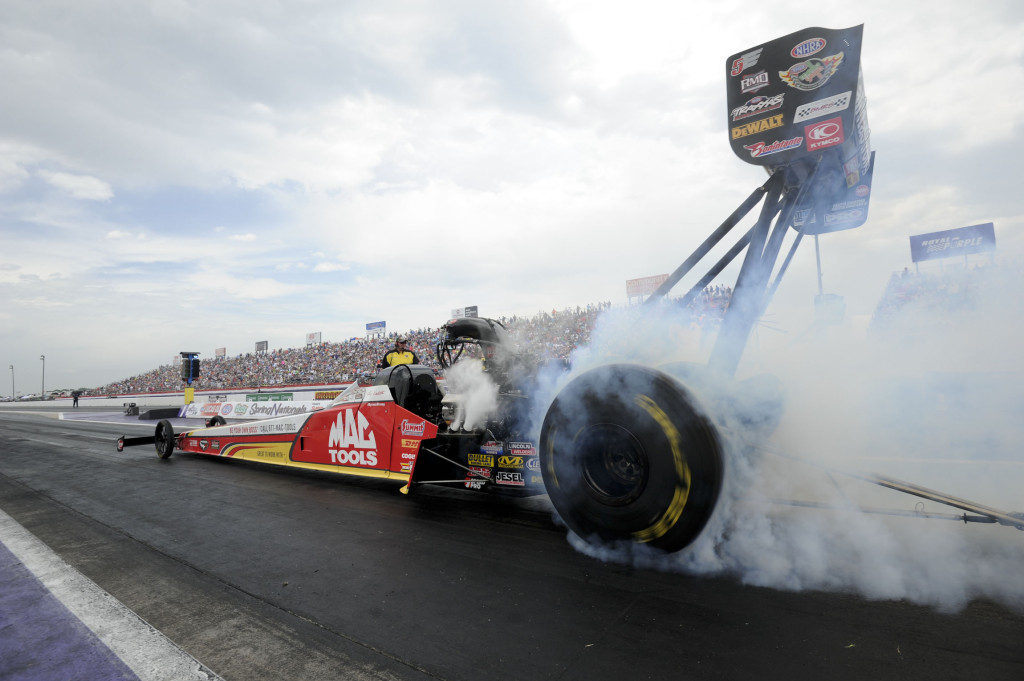 It is the first time Kalitta has defeated eight-time world champ Schumacher in a final round since Brainerd in 2003, a stretch of 10 consecutive final rounds.

“We got by him, so it wasn’t until the end that we got him,” Kalitta said.  “Tony’s a tough competitor, and here lately, we’ve had a tough time getting around him.  Hopefully, this is a sign of things to come.”

With the win Kalitta moved to fifth in the series standings in addition to earning a spot in the coveted Traxxas Shootout.  Schumacher moved into the series points lead with the runner-up finish.

“Jim Oberhofer and Troy Fasching made great calls,” said Kalitta.  “I was looking for the win light and when I saw it that was all that mattered.” 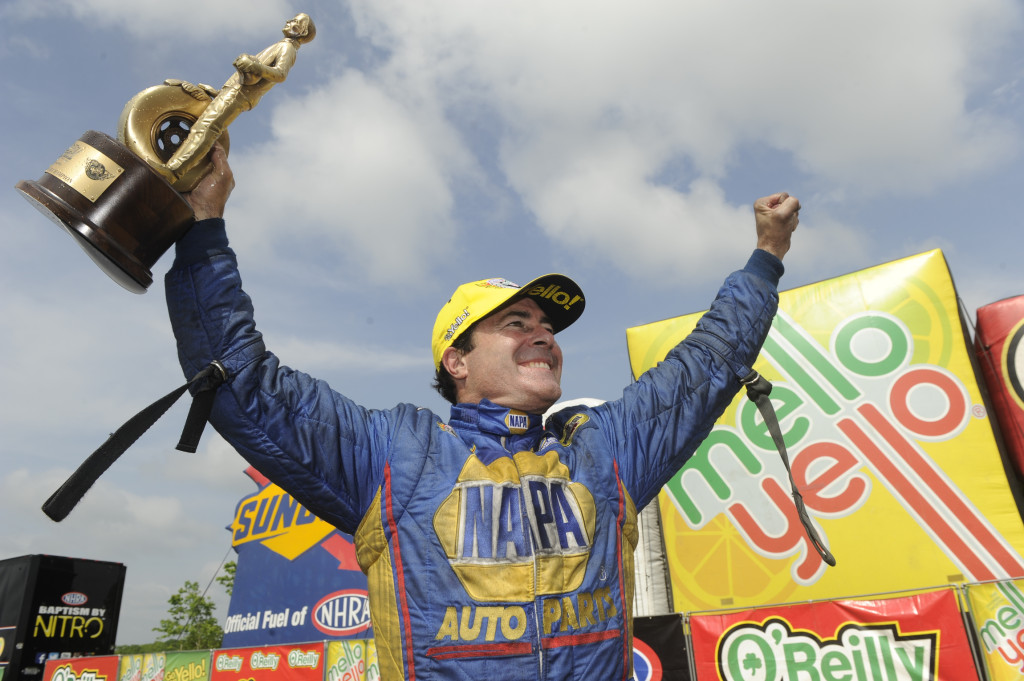 The last time Ron Capps and his NAPA team won the trophy in the NHRA SpringNationals near Houston, he presented it to the family of a fellow Californian who died in a Funny Car testing accident a couple weeks before.

Each return to the track in Baytown, Texas stirs up great memories of the late Eric Medlen.  And Sunday was no different.

“We’ll never forget Eric.  All wins are special but anything to do with this track reminds me of him,” said Capps, who defeated Don Schumacher Racing teammate Jack Beckman in the championship round to earn his second event title in six races this season.  It also moved him to No. 1 in the NHRA Mello Yello Drag Racing Series Funny Car standings with 18 events remaining.

Ron, who gave DSR its 248th NHRA Wally trophy, won his 44th Funny Car title which moves him to sole possession of second place in the all-time wins list.  His NHRA career total reaches 45, which includes the first one in Top Fuel in 1995.

“No. 2 all-time is crazy,” said Capps.  “I’m not that good so it all goes to the guys who have been on our teams.  My past crew chiefs, all of the crew guys that have turned a wrench on these cars, it’s about those guys.  I couldn’t have enjoyed this much success without any of them. ”

The California native living near San Diego also took over the championship points lead for the first time since the fifth event of the 2013 season.

A big step toward his jump from fifth to first in the standings came in the quarterfinals when he defeated reigning world champion, and teammate, Matt Hagan, who arrived at the SpringNationals leading the points. 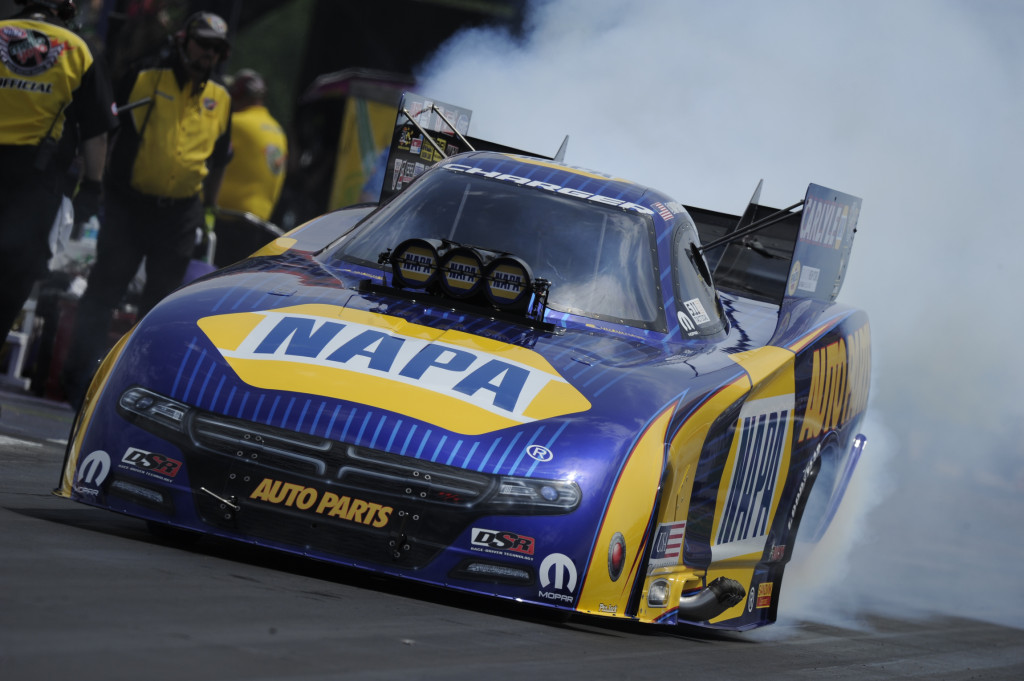 But what might end up being the best race of the entire season came in the semifinals when he faced Robert Hight.  Both drivers completed their runs in 4.084 seconds with Hight faster at the finish line (318.39 to 308.35 mph).

The winning margin for Ron was at the starting line where his reaction was a scant one-thousandth of a second quicker.  It was enough to allow him to edge past Hight by about 7 inches.

“Robert brings out the best in me,” Capps said. “He’s a great driver and when he’s in the other lane I know I have to be at my best.  We can see so much better out of our Dodge Charger bodies that I thought I saw him just get past me, but then I saw my win light come on.”

His NAPA Dodge opened Sunday’s eliminations with a time of 4.034 (319.45) to beat John Hale before facing Hagan, Hight and Beckman. 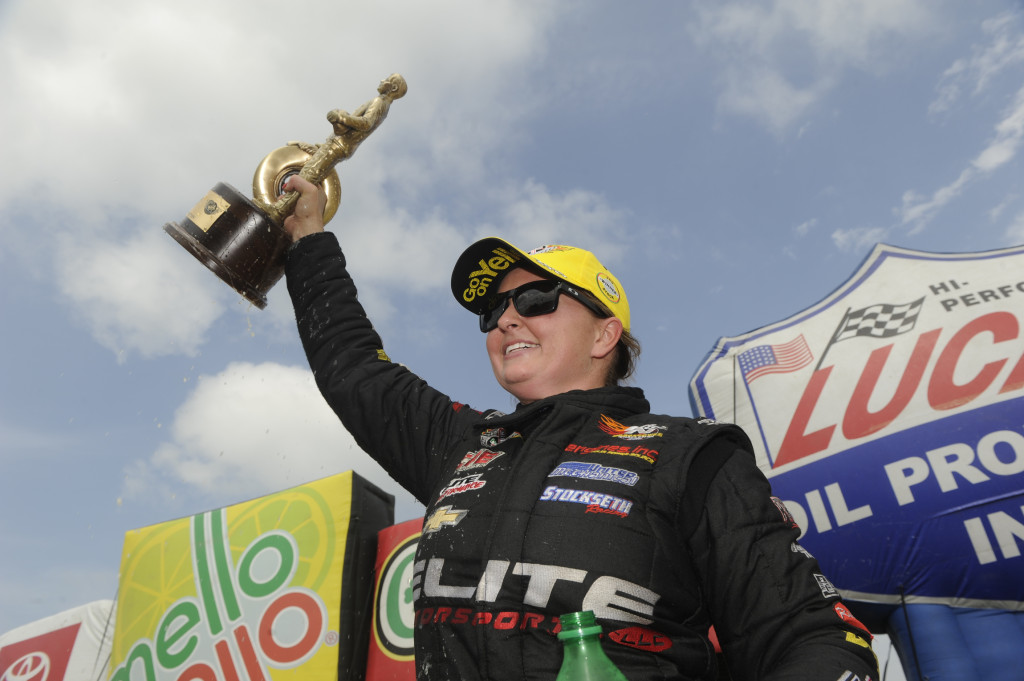 Erica Enders-Stevens celebrated her second straight victory in 2015, this time in her native Houston.   The win sent her into the championship points lead for the first time in her title-defending season.  Enders beat Allen Johnson, Vincent Nobile, Jonathan Gray, and Chris McGaha.  It was also her second consecutive win at Royal Purple Raceway, where she began her racing career at the age of 8.

“I didn’t think anything could top winning here a year ago,” said Enders-Stevens “but this just might have done it.  I don’t know if we’ve ever worked harder for a win.  We had a complete engine change before racing Jonathan.  We went to warm up, and we realized there was a big problem with the motor.  There was 10 minutes until we needed to be in the staging lanes and I thought we were done, but the guys got after and pulled it off.  They are unbelievable.

“Big thanks to everyone from all the other teams that jumped in and helped. That’s what’s special about drag racing:  We all want to beat each other on the racetrack, but we’ll do anything to help the team you’re about to race if they need it.”

This was Enders’ 14th Pro Stock victory, although she quickly deflected any praise to team owner Richard Freeman of Elite Motorsports and crew chiefs Rick and Rickie Jones.

“I say it every time anyone asks and I’ll say it again, I have the best team in drag racing,” Enders said.  “What we’ve been able to accomplish in the last year and half is nothing short of amazing.  I always dreamt of winning here when I used to run my Jr. Dragster here with my dad and sister, and when I dreamed about winning, I would dream about being with a team just like this … the very best.

“I credit Richard for putting together an awesome group and constantly motivating them to push themselves every race. This is my dream and it continued today.”

The NHRA returns back in action May 15-17, 2015 at the Summit Racing Equipment Southern Nationals near Atlanta. 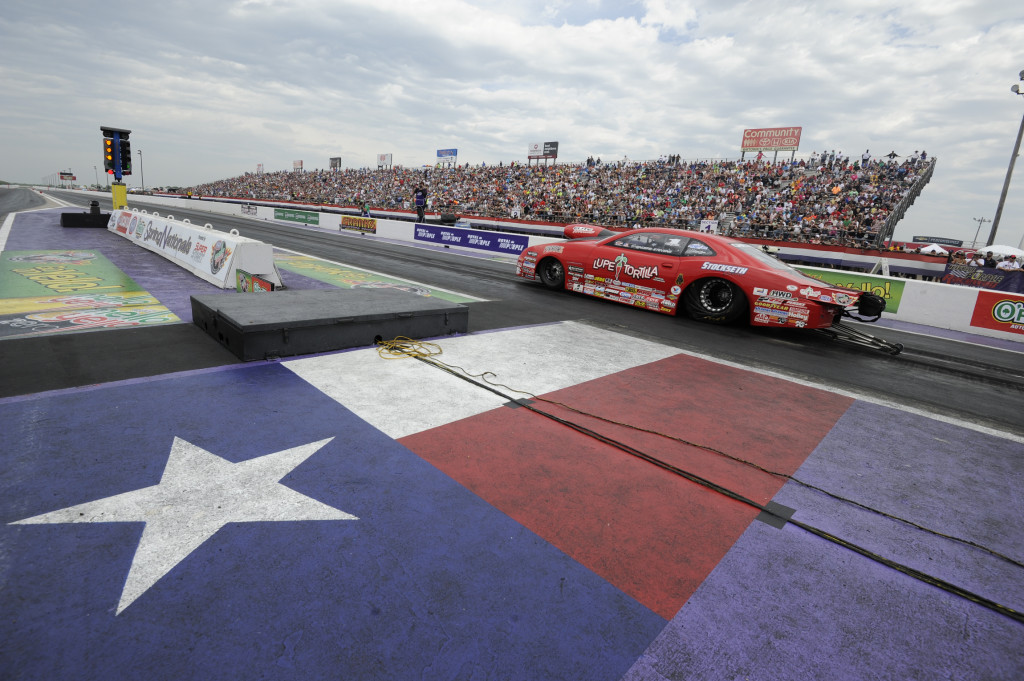