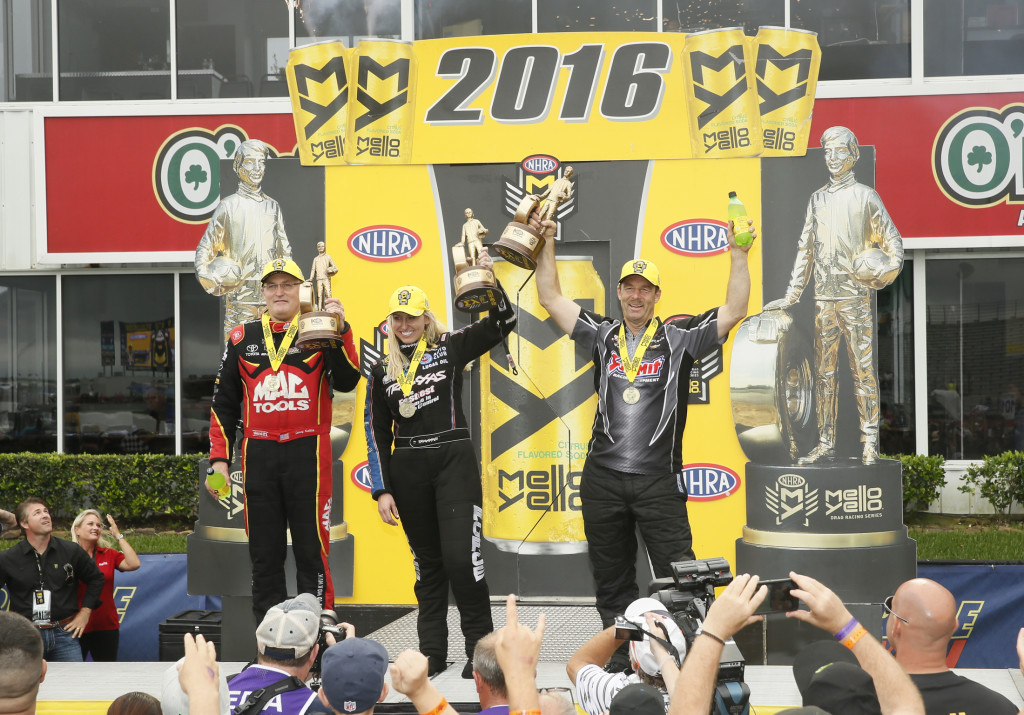 The NHRA SpringNationals at the Royal Purple Raceway in Houston saw Doug Kalitta defend his Top Fuel title for the race, winning for a second consecutive year while Courtney Force earned her first Funny Car win of the 2016 season, bringing her up to a tie with Tim Wilkerson in the Mello Yello points standings.

Greg Anderson and Jason Line still have a stranglehold on the Pro Stock class, extending their streak of six consecutive final rounds for Ken Black Racing, but this time it was Anderson reacting first over his teammate, Jason Line in grabbing his third win of the early season in another show of domination. 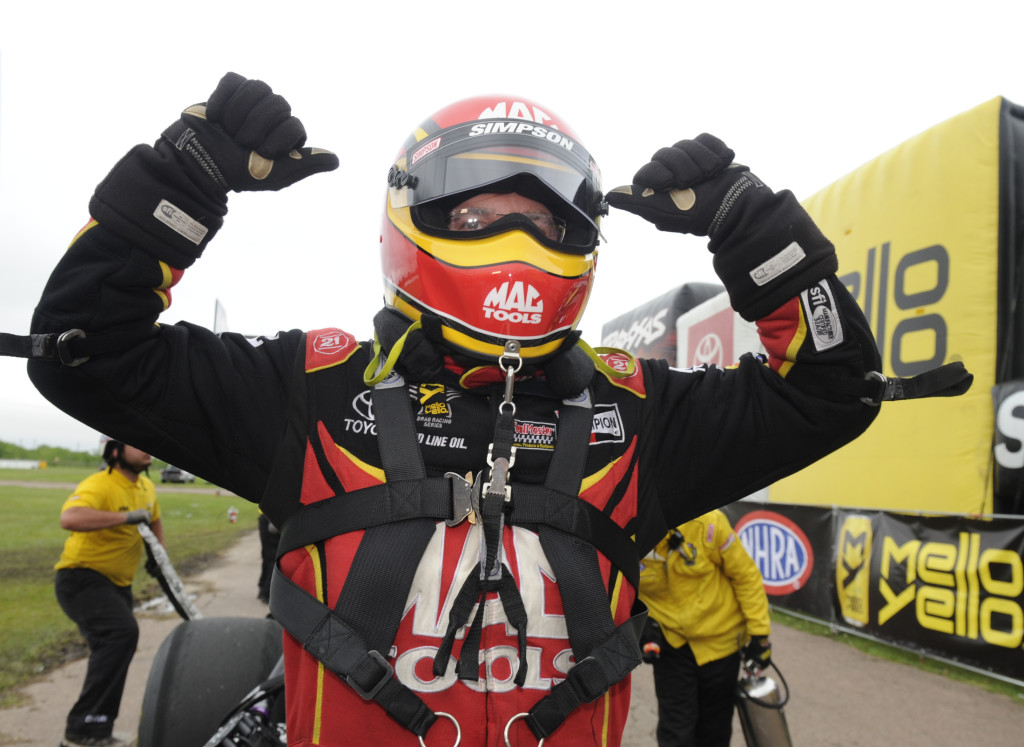 It was another starting line mosh pit pile on from Kalitta Motorsports after their flagship driverDoug Kalitta, won his 39th Top Fuel career race defeating the very determined Texan in Steve Torrence.  Kalitta marched through eliminations beating Terry Haddock, Kebin Kinsley and Leah Pritchett in the semi-finals to get to his 83rd final round appearance.

Kalitta had to use his right foot to decide the outcome of his Top Fuel final race of the day, delivering a knockout blow with a .036-second light to leave first despite both cars blowing up right before the finish line.  Kalitta produced a pass of 3.813 seconds, 280.60 mph to Torrence’s time of 3.800 seconds, 306.81 mph to win on a narrow holeshot in a great side-by-side challenge.  The win now places him in a tie for fourth in the overall standings with Antron Brown and Kenny Bernstein each sharing 39 victories.

“I am really happy and any time you can get a win is huge,” said Kalitta.  “It was the first time this year that we were able to put a Team Kalitta dragster in the winner’s circle, so that is huge as well.  It was a close race out there.  I had struggled with the lights today and to deliver that in the final was huge.  I actually didn’t realize I had won until I had gotten to the end and turned around and came back.  I was real happy.  It’s good to get a win and get the momentum going.  It just charges everybody up.  It was just a really good day for us.”

The win also propels him into the elite Traxxas Shootout in September at Indy and places him within one point of leader, Brittany Force after the completion of six NHRA National events (464-463).

Runner-up Torrence was the No.1 qualifier in Houston, setting the record of accomplishment at 3.724 seconds and for the first time ever in his career beating Antron Brown in the semi-finals after 17 straight matchups that had before left Torrence with a loss.

“We didn’t close the deal and that’s the bottom line,” said the six-time Top Fuel winner and 2005 Top Alcohol Dragster champion.  “That’s a great team over there (Kalitta), but we’ve got a great team, too.  The thing is, this isn’t the last time we’re going to see Antron or Doug in the other lane.  It’s a long season and we’ve put ourselves back in contention for that championship knowing that we’ve got a great car moving forward. 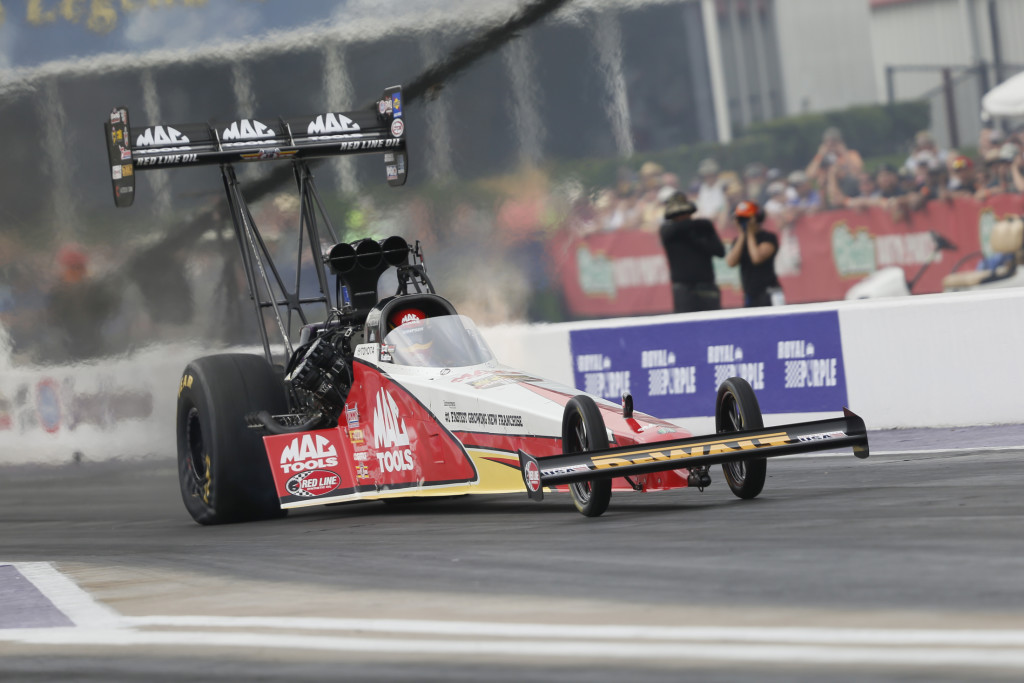 “I just hate that we had a chance to win a race on one of our home tracks, with all our friends and family watching, and didn’t get it done.  Close doesn’t count over here.”

In other Top Fuel news, Terry McMillen had a first round explosion that was one for the record books annihilating the top of his engine in a fiery explosion in a losing attempt against Tony Schumacher delaying the start of the race for 25 minutes. 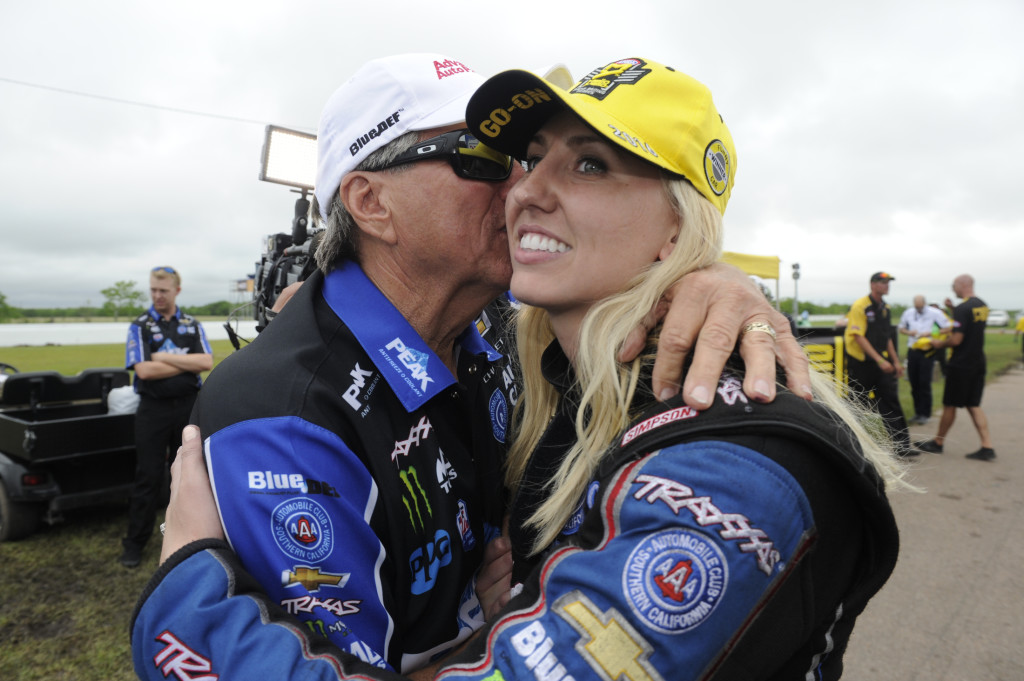 Traxxas Funny Car driver, Courtney Force saw a great opportunity to move up in the standings and went for it, taking her eighth win of her burgeoning career and vaulting her from sixth into a tie for first with Tim Wilkerson in the Fuel Coupe points. In doing so, she joins her sister, Brittany in sharing an NHRA first of having women as the leader in both nitro categories.

“To be in the points lead, tied with Tim Wilkerson, I didn’t even know that was possible this weekend so that was music to my ears,” said an emotional Force.  “To be in the points lead with my sister Brittany in Top Fuel, that’s something that I can’t even describe.  It’s a moment I can’t even put into words.  My sister and I are both leading right now and I’m going to cherish this moment for a long time.”

“This wasn’t even a great weekend for our car.  We were probably not as consistent at this track in Houston as we have been in the past so that gives us a little more confidence going into the rest of the season because we know we have a better race car than what we showed this weekend and we were able to take home the win.”

In the final round, it was Force lining up beside veteran driver Tim Wilkerson to go for the Wally.  In a classic race, Force clicks the clocks with her best run of the weekend of 3.913 seconds, 327.90 mph to take down the No.1 qualifier of Wilkerson with his great pass of 3.943 seconds, 323.81 mph.

“He [Wilkerson] was the one to beat out here,” smiled the 27-year old Force.  “I think everybody knew that.  I mean, he was running good in the worst conditions.  Half of the field wasn’t getting down the race track and he’s out there outrunning everybody and improving his time running in the 3.0’s.  The first thing I did was look [at the ladder] and say, ‘well at least I won’t have to run him until the final’ because I knew he had a good race car and everyone out here knows that.  For our Traxxas team to be able to improve and come from behind and really be able to take him down for the win is pretty amazing.  He’s the one who’s really leading the charge since the start of the year and everyone’s really gunning for him right now.”

With this win, Force locked her team into the Traxxas Nitro Shootout, her sponsor’s specialty $100,000 to win “race within a race” that takes place during the Chevrolet Performance U.S. Nationals at Indy. 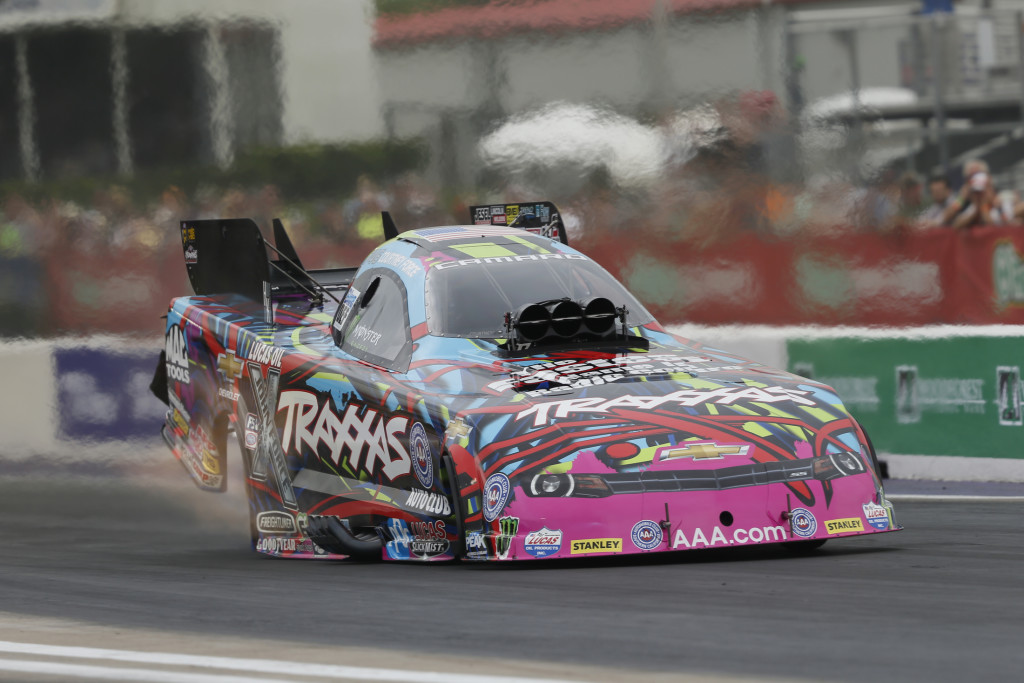 “Every time we go out there we’re looking to get that win to get locked into the Traxxas Nitro Shootout.  The fact that Traxxas puts this on every year is amazing for our sport. It’s amazing for the fans and for the drivers.  I think we need it and everyone loves it.  It definitely feels good, especially driving for Traxxas to be locked in and not have to worry about it anymore.” 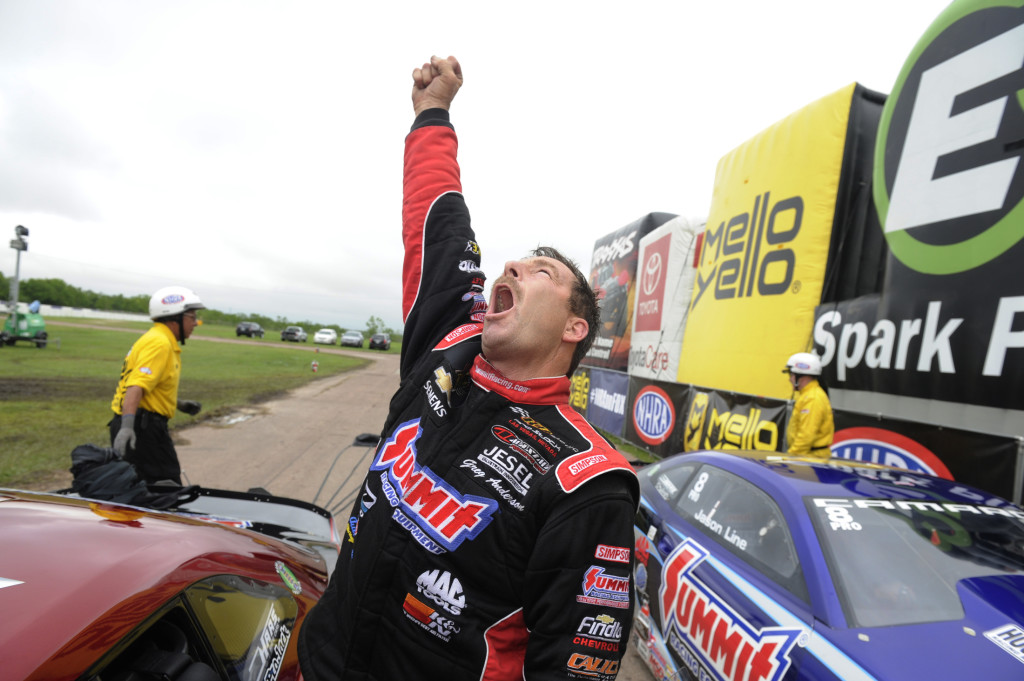 In Pro Stock, Greg Anderson won his third race of the season on a holeshot against Ken Black Racing teammate Jason Line.  Anderson pushed his Summit Racing Equipment Chevy Camaro to a 6.630-second pass at 209.43 mph to defeat the point-leader’s 6.597 second run at 209.95 mph in his Camaro.  Anderson, who has three career wins at the SpringNationals, was also the No. 1 qualifier.  The duo has combined to win the first six races of the 2016 season and share three victories apiece.

Anderson, a four-time Pro Stock world champion, opened eliminations with a bye before defeating Vincent Nobile and Allen Johnson in the second round and semifinals, respectively.  Anderson trails Line in the points standings by 79.

“I felt a little bit bad for Jason there because you want it to be a tough race and you both do your very best job, said the 2016 three-time winner.  “Obviously, he missed the Tree there, and my car didn’t make a good run there, so there was a bobble on each side and it ended up being a very close race.  It was a good side-by-side Pro Stock race.  You never know what you are going to get.  You have to go out there and race them on the race track.  If you look at the scoreboard in previous rounds, our reaction times were within thousandths of each other and our times were within thousandths of each other.  It came down to the cars still being very close in a different way.  It was a fun day and thank the weatherman again for being wrong.” 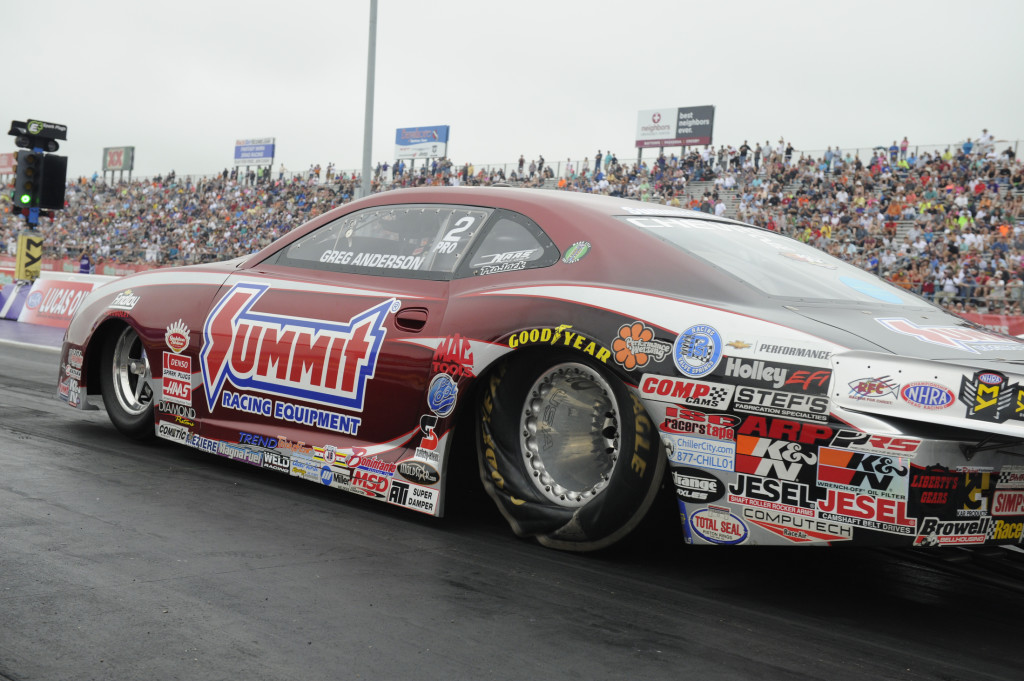 Two-time world champion Line extended final-round-appearance streak to six – racing for a Wally in every race so far this season.  He defeated veteran V. Gaines in the opening round before he had a bye in the second and outlasting teammate Bo Butner in the semifinals.