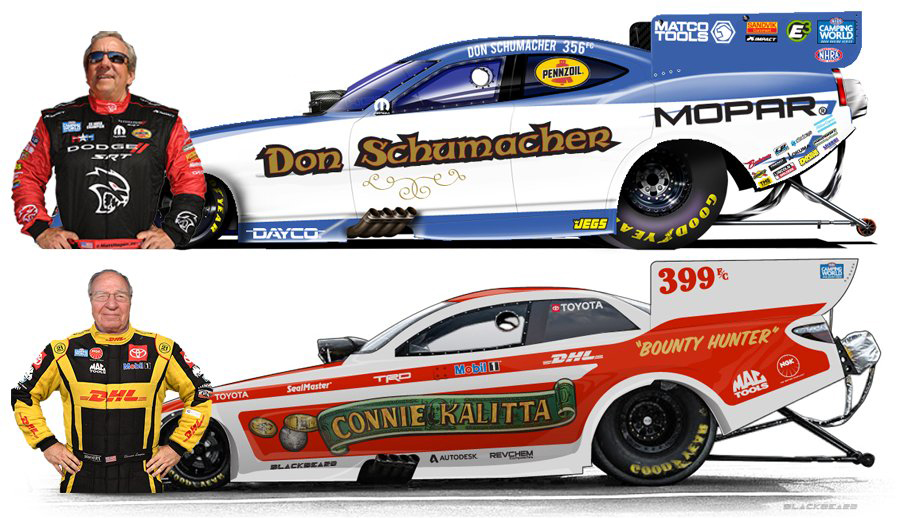 The upcoming NHRA Camping World Drag Racing Series’ return to The Strip at Las Vegas Motor Speedway will offer fans – and all grandstand seating is sold out – a special incentive to show up for the DENSO Spark Plugs NHRA Four-Wide Nationals, scheduled April 16-18 as the second race of the season.

Not only will all four Camping World categories – Top Fuel, Funny Car, Pro Stock and Pro Stock Motorcycle – be on-site for competition at this spring classic, but there will be a special match race before the first of three qualifying sessions on Friday afternoon.

Continuing a rivalry that, these days centers on their hired guns, mega team owners Don Schumacher and Connie Kalitta will take to the track for competition of their own that Friday afternoon, pitting The Bounty Hunter (Kalitta) against Schumacher in team-prepared Funny Car entries in a single-pass exhibition run for bragging rights.

Kalitta will race a Toyota Camry celebrating his “Bounty Hunter” days on drag strips around the country. Schumacher’s Dodge Charger Hellcat SRT, like Kalitta’s Camry, will be wrapped to reflect a favorite livery from each driver’s time behind the wheel. Kalitta stopped racing competitively in 1998 while Schumacher ended his driving days in 1974. The two former championship drivers made practice runs and renewed their competition licenses in a closed test session last month in anticipation of this event.

“We know the fans will get a kick out of this, and this is our way of saying ‘Thank You’ for sticking with us during the tough season we all endured last year,” Schumacher said. “Never in a million years did I think I’d get back behind the wheel of one of these nitro-breathing machines, but here we are. Connie and I have enjoyed kicking each other’s butts with our race teams all these years, and now we’ll get to go head-to-head on the starting line for the first time and really settle the score. I have no doubt my Dodge Charger will come out on top.”

Not so fast, Mr Schumacher! After all, it was Kalitta Motorsport’s J.R. Todd who ended Don Schumacher Racing’s 14-race Flopper winning streak at the 52nd Amalie Motor Oil Gatornationals last month. “I am doing this for the fans and everyone that has supported Kalitta Motorsports over the years, especially last season,” Kalitta rationalized. “Don and I have battled each other for decades and I jumped at the chance to kick his butt in a Funny Car. I have been talking with my Funny Car drivers and they have given me some great tips,” the Bounty Hunter revealed. “I know I will be able to get the job done in Vegas and I am looking forward to racing this Toyota Camry Funny Car to another win”

Both machines will be prepared by the Hall of Fame drivers’ teams respective championship-winning crews, with modern-day Funny Car bodies attached to their bespoke chassis. With the talents available to them, both drivers are expected to exceed the 300-mph benchmark during this widely-anticipated exhibition event and both drivers are hoping to re-set their career-best E.T.s by clocking passes in the low 4.0/high 3.9-second zone for the quarter-mile.

Are fans excited by the prospect of seeing their long-time heroes battling on the dragstrip for a final time? If they are, they’ve just been pranked by two exceptional public relations departments, who decided to celebrate April Fool’s Day in magnificent fashion. Did we fool you?