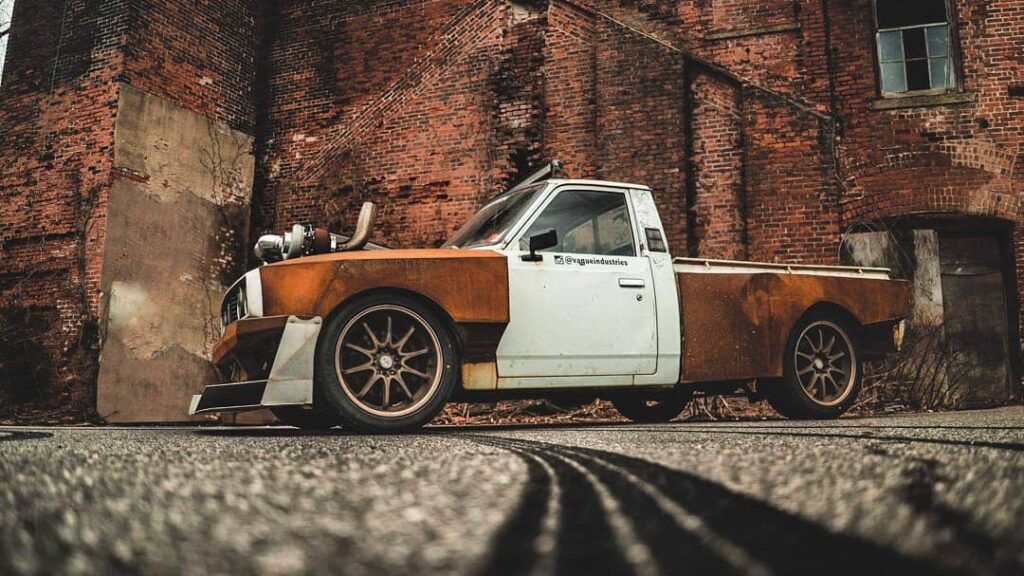 Josh Mazerolle understands momentum, both the personal and mechanical kind.  Owner of Vague Industries, a custom shop in Dublin, New Hampshire specializing in chassis and suspension, Josh did a burnout into the public eye last year with his customized 1977 Toyota Hilux, a truck that was part revenge saga and part epic build.

The Hilux’ beginnings are humble. Mazerolle found it in the Arizona desert, and instead of leaving it rusting in peace where it belonged, decided to drive it across the country to Texas, picking up some…let’s call them “customizations” along the way.  It wasn’t actually Josh’s intention to turn the Hilux into the beast that it is, but shortly into the truck’s trip east, it developed wrist pin knock in the engine, necessitating a repair stop. And thus an epic was born. Originally, Josh had wanted to recreate a build he’d been planning on a project truck, but a bad experience with the truck’s owner left him longing to finish his vision.

To be honest, the current Hilux…isn’t quite that. 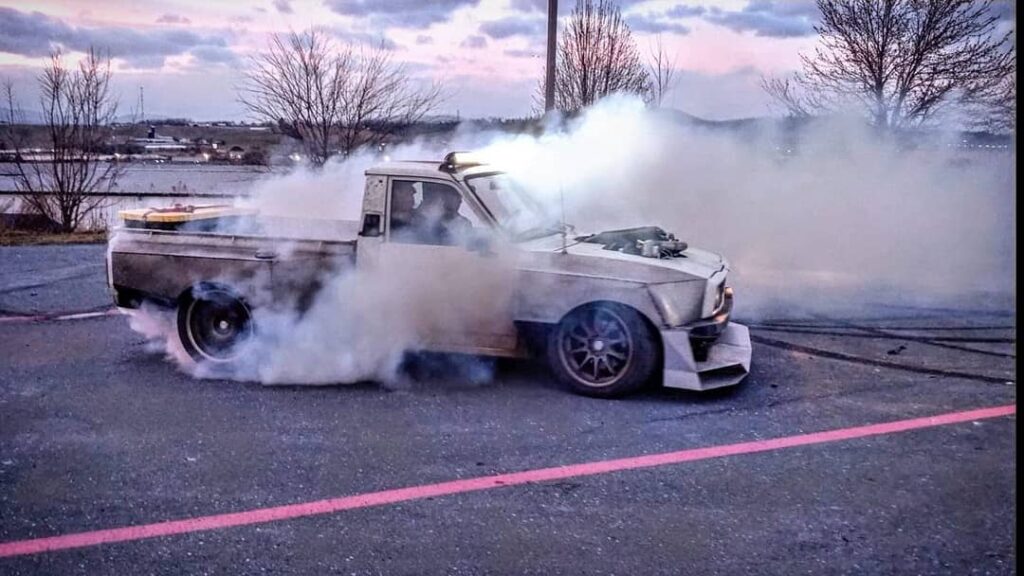 The wide-body truck gained a front and rear suspension from a 2006 Ford Crown Vic along with a turbo 4.8-liter iron block V8  engine sticking up through the hood.  And that was just the beginning.  They say the real journey is the friends you make a long the way, and the Hilux made a LOT of friends through numerous stops to fix, re-fix, mod, mold and fabricate along the way.  And when people put their time, energy and love into the car, they signed their names.

“Two years ago, I tried to drive the Hilux home from Phoenix in stock form,” Mazerolle explains. “It took me three months. It kept gaining things as it kept breaking down.  I started out wanting to build a really nice truck. I originally saw it as an opportunity to make up for a bad client experience. At the time, when I found the truck in the desert, I wasn’t willing to give up building this truck the way I wanted to, but it evolved. Because it’s a wild build and I drove it across the country, the project spread with the kindness of strangers. It grew its own personality and its own stories.”

The build captured the attention of the media, including Discovery/MotorTrend, who were doing a 3K Hooptie Challenge. They contacted Josh about participating, saying, “We want it on the show. You’ve got 10 days.”

“I’m not a huge fan of drag racing,” Josh says, “but that’s what the show was about and I was up for it.  I kept telling myself that attention has momentum. Once it gets going, keep doing it until it runs out.” 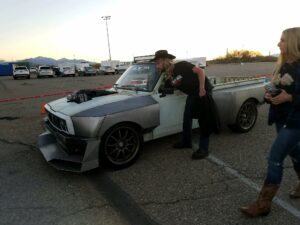 The Hilux was a hit, and Josh found himself at the center of attention at Holley’s LS Fest, on YouTube, and in other outlets.

Mazerolle has always had builds in his blood. ” I came out of the womb kicking the clutch.  When I was 9, my dad and I did a frame up restoration on a Toyota pickup.  I ended up with that truck as my first vehicle when I got my license. I immediately flipped it in the driveway and had to rebuild it.  I did it as my senior project in high school and ended up with a small block Chevy. The rest is history.”

And while the Hilux has been a superstar, Josh knows that it’s one piece of a bigger puzzle. “This Toyota has turned into a marketing tool.  It’s gotten out of hand. It was supposed to be a joke, and now it’s crazy. We’re working on a TV show, some podcasts, a bunch of things. We are only gonna get so much juice out of the Toyota. Attention is very short, so we’ve got another wild crazy build in the works.”

On April 1, Mazerolle is leaving New Hampshire in the Toyota, driving it to Dallas and dropping an LS Motor off with a friend, before continuing to LA. There, he’ll pick up a 1966 bone stock Chevy pickup, and return to Dallas where he’ll install the motor with the help of friends Emily and Aaron Reeves, who have a YouTube Channel as well as a Velocity Channel MotorTrend On Demand Show, “Live Love Wrench.”

Clearly, Josh is a glutton for cross-country punishment.  “I’m a bit of a road hammer,” he admits. “I put 28,000 miles on the Hilux in a year, but the rewards are totally worth it.” 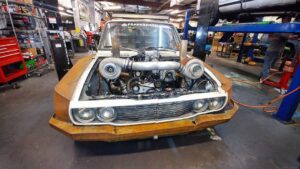 He’s also heading to LS Fest West in a month or so, where he’ll hang out with the Hoonigans and help shred the new lot.  “I’m gonna hang out, do some burnouts. My goal is just to look cool,” he says, with a grin.  “Not to drag race. No one wants that.”

The biggest unexpected challenge now is dealing with the fame. “I’ve never been recognized in my life,” Josh says humbly, “and now people are asking for autographs. I got stopped by a family at a gas station in Texas and the little girl asked me if I was a YouTuber. I didn’t even know that was a thing, but I guess I am.”

You can read more about the Hilux’ journey on the Vague Industries website, here:  https://www.vagueindustries.com/portfolio/1977-toyota-hilux/  and check it out in person in the video below.

About Andreanna Ditton 217 Articles
Andreanna Ditton is the Content Manager for MotorHead Media and the Editor-in-Chief for RacingJunk.com/news. She's been working in the automotive publishing industry since 2007 focusing on racing and performance for motorcycles and cars.