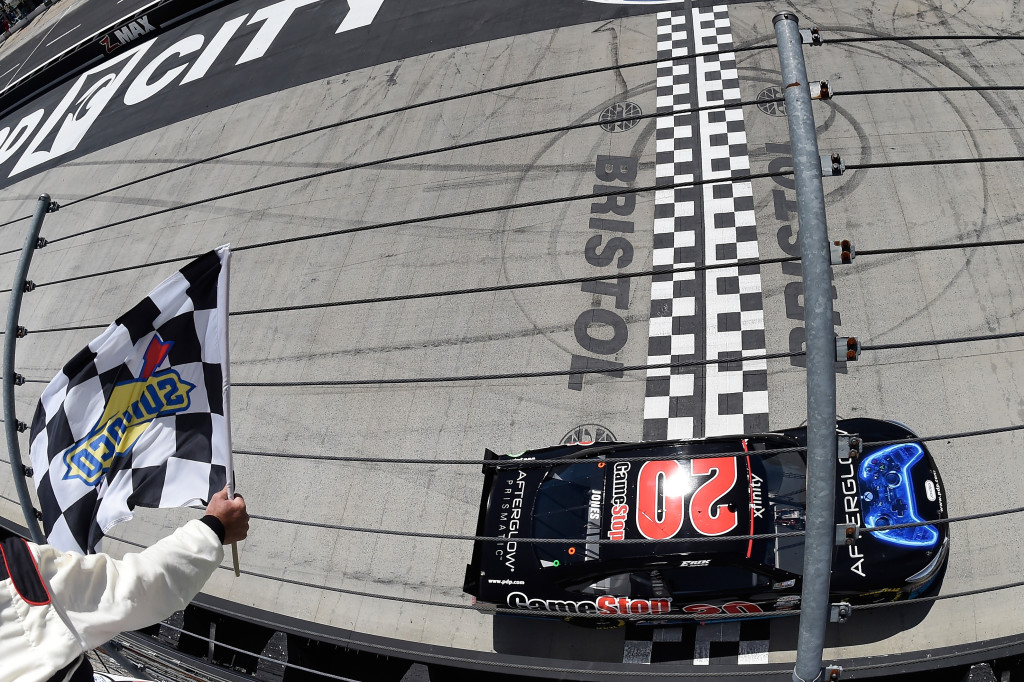 Erik Jones put on a power move over Kyle Larson, jumping from fourth to first on the final restart to win the Fitzgerald Glider Kits 300 NASCAR Xfinity race at Bristol Motor Speedway on Saturday afternoon. Jones bided his time in one of the most hotly contested races in quite some time that saw him alongside Larson, badgering him for the lead and taking it on the high side with two laps to go, but he had a good reason to be so persistent.

With Jones taking the win, he earned the $100,000 Dash4Cash bonus and became the first full-time Xfinity driver to enter their series’ Chase of 12 for the championship with his win.

For the first time ever, to determine the starting line-up of the race and to select the four candidates for the Dash4Cash bonus, the first 100 laps was broken into two 50-lap qualifying races with the two highest finishing Xfinity regulars eligible based on an odd/even qualifying race order. In the first race, Jones won his qualifier and won the pole for his efforts and Justin Allgaier was the second qualified runner. The second race produced Ty Dillon and Daniel Suarez as the other two entrants for their opportunity to seize $100,000 for finishing best among the four with Austin Dillon winning that segment. 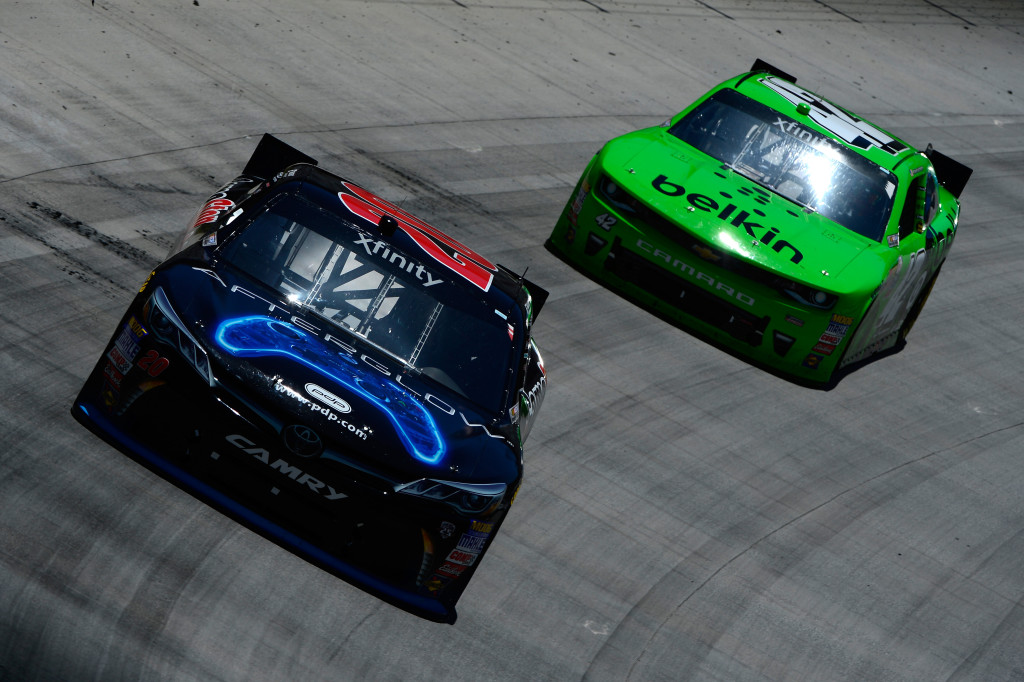 Larson clearly had the car to beat in the race, but when the caution flag flew on lap 188, it brought the field under control of the Pace Car and didn’t resume the race until three laps to go after major debris clean up.

Jones mounted a charge to the front from the second row outside, making a dive past Joe Gibbs Racing teammate, Kyle Busch, whose engine fluttered, leaving him behind but not for long. Jones matched Larson on the restart and quickly built up momentum. When Jones went for the lead, he brought along a much better running Busch by that time to finish second.

“We had a really good restart and Kyle (Larson) just left the top open,” said an elated 19 year old Jones, hoisting his first Bristol trophy and third win overall in the Xfinity series. “He went up there and tied to keep us behind him. We kept digging and it all worked out. I couldn’t be any happier than getting this Game Stop Camry in victory lane.

“I figured at some point in the year we could get a win when they [Busch and Larson] weren’t in the field and a bigger task if they were. I’m just so excited and practically out of breath. To beat those two is a really big day for us.” 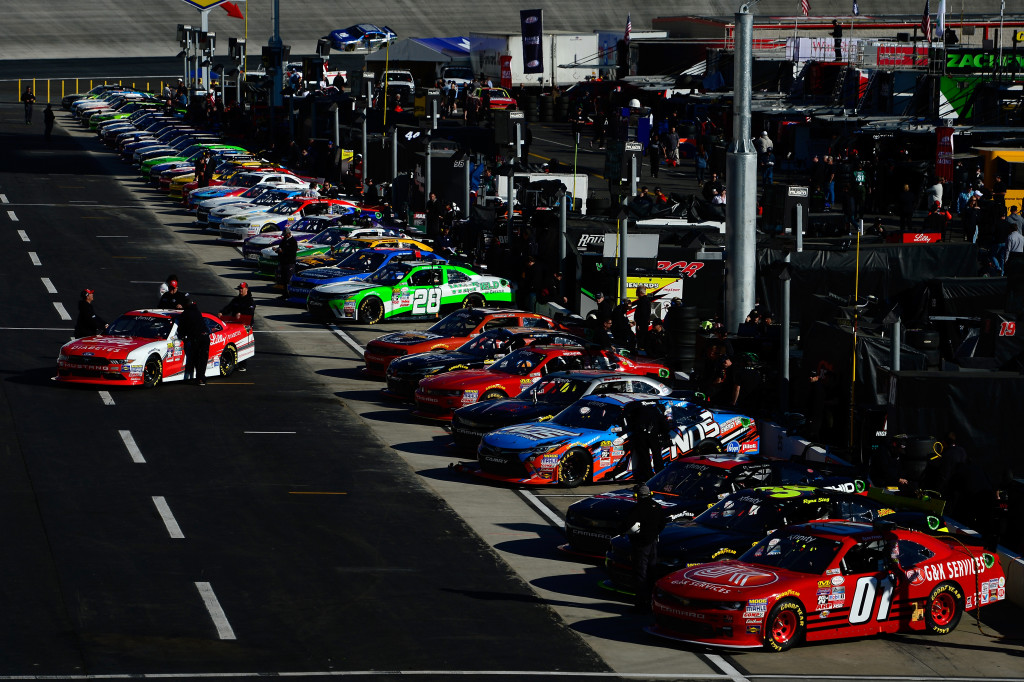 Runner-up Busch wasn’t happy giving up so much ground on the final restart, allowing his JGR teammate an advantage with victory so close in view.

Though Jones was the winner, most of the race was a battle for the top spot between Larson, who led 94 laps, and Busch, who led 43.

“Restarts for us today were horrible,” said Busch, who had his four-race winning streak of NASCAR touring events stopped. “When we would go for the gas, the car would shut off and wouldn’t go. It’s frustrating when you’re in position and you have a chance. It’s a great day for Erik Jones. He certainly stole one today. The two cars that were the class of the field today didn’t win – oh, well.”

Larson spent most of his time in the post-race beating himself up for leaving the top lane open for the opportunistic Jones.

“I just did a really bad job on that restart – really bad,” said Larson, who finished third. “I knew I gave it away. I’m really disappointed in myself. I just ran half a groove too low through (Turns) 3 and 4.” 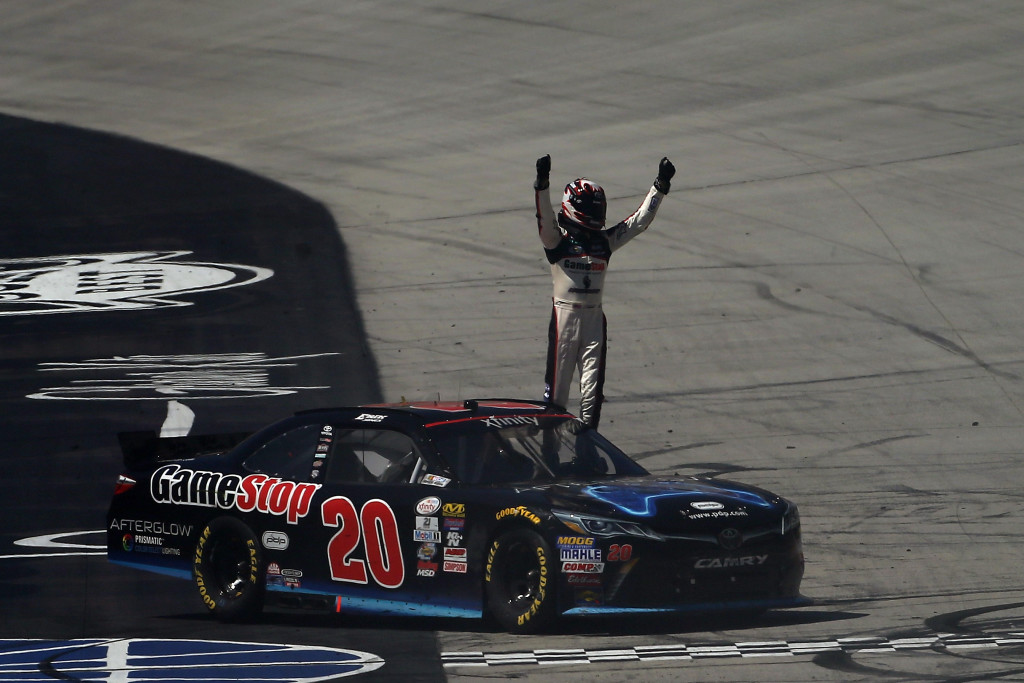 The average speed of the race was 93.829 mph with three caution flags for 23 laps. There were 10 lead changes among four drivers.

Now with Jones as the first entry into the NASCAR Xfinity Chase, the rest of the field is still battling for position with Daniel Suarez building up an eight-point lead over Justin Allgaier, followed by Elliott Sadler, Brandon Jones, and Ty Dillon.

The NASCAR Xfinity series moves on to Richmond International Raceway for the ToyotaCare 250, the second of the Dash4Cash races on Saturday, April 23. The race will air on FOX Sports 1 at 3 p.m. EDT.