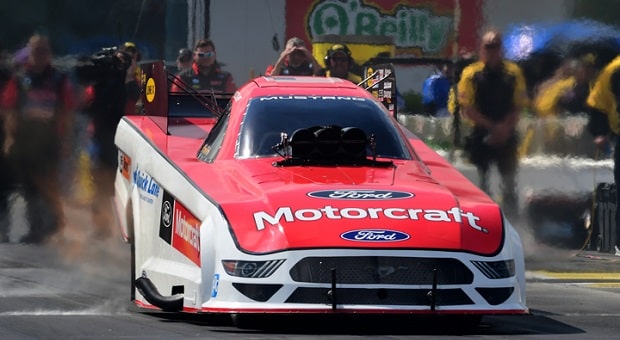 Crew chief shuffles are nothing unusual in most NHRA Mello Yello Drag Racing Series seasons. It’s well known that Bob Tasca III hasn’t been satisfied with the direction his team has taken. After returning to the Funny Car wars in 2018, Tasca built his new team from the ground up, installing former Don Schumacher Racing assistant crew chief Eric Lane in the catbird seat, depending on his DSR contacts and the knowledge gained as second to Ron Capps’ tuner Rahn Tobler to help elevate his game.

Tasca’s successes have been elusive and the addition of Mike Green, formerly crew chief to eight-time champion Tony Schumacher, who Green oversaw in his eighth championship, didn’t appear to be showing any real signs of change. The rumors began to fly that Lane was out, Green was gone, Mike Neff would take over those duties since Schumacher, whom the Californian tuned in 2018, hadn’t approached a single water box in 2019 and is on the sidelines. Rumors are great for stirring up interest; they’re not always viable (which is why we don’t write about them terribly often).

Turns out none of the above scenarios is correct. The Monday morning news is completely different from what anyone was talking about over the past week. Mike Green is leaving Tasca’s Motorcraft/Quick Lane Racing team and Jon Schaffer, most recently co-crew chief for rookie Austin Prock, is departing John Force Racing to join Lane as co-crew chief on Tasca’s Ford Mustang Funny Car. Schaffer joins the team effective with this weekend’s Virginia NHRA Nationals at Richmond while Green piruoettes to JFR.

Jon Schaffer, although only 31 and the youngest full-time professional crew chief in NHRA (as he was when tabbed by John Force), has plenty of experience in both Funny Car and Top Fuel applications. 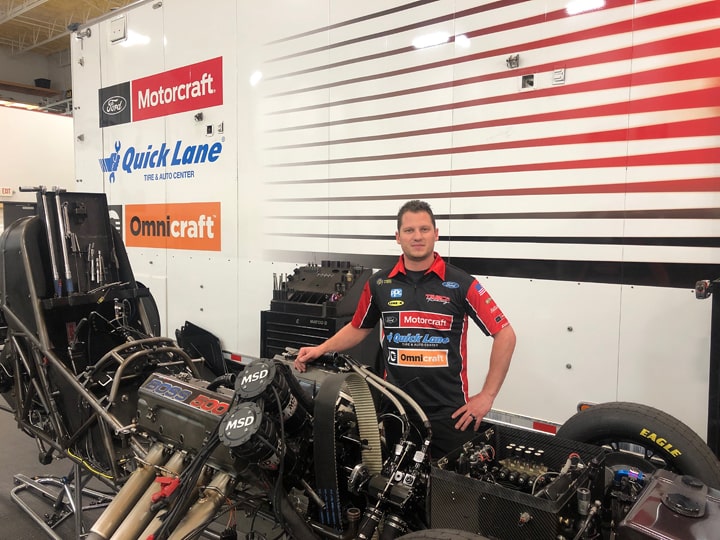 “I’ve known Jon and raced against Jon for many years,” Tasca said, “and I’ve always looked at him as an up-and-coming talent, no different than I feel about Eric. I’m optimistic that the two of them working together will be a powerful combination.

“Part of putting this program together in conjunction with Ford was to win races,” Tasca continued. “We committed to that from the beginning and I’ve been working to create the best team I can that’s capable of producing the best results. I have very high expectations for our program. The only thing that is acceptable to me is for this team to win races and compete for a championship this year.” Tasca currently holds 10th position in the Funny Car standings, on the “bubble” for inclusion in the Countdown to the Championship six-race playoffs that begin after the Chevrolet Performance U.S. Nationals on Labor Day weekend.

Tasca III debuted Ford’s newest Mustang at the start of this 24-race season in Pomona. Both he and Ford Motor Co. have been expecting good things from the aerodynamics of the Mustang shell, but they haven’t gotten far yet, winning only five rounds of competition.

Speaking of his new crew chiefs, Tasca said, “It may take us a few runs of a few races to get exactly where we want to be, but these changes are based on the long-term goal, and that goal is to win races and win the championship with this Motorcraft/Quick Lane Ford Mustang. I didn’t feel like the setup I had was capable of doing that at any point this season and, just like the leader of any company, I wanted to set our team up for success in the near term to meet the long-term goals.”

From the Northern California town of Discovery Bay, Jon Schaffer spent his formative years in the karting and open wheel ranks before trying out stock car racing. It was his friendship with hometown NHRA Top Fuel driver David Baca that brought Schaffer to NHRA racing. Like anyone else, Schaffer was taken with the power of Top Fuel and Funny Car engines; he decided to make his career tuning them. He’s worked with six-time champ John Force as well as with Prock, most recently sharing tuning duties with Ronnie Thompson.

“Bob has a great organization that has been well-established, so there’s already a team, the parts, everything’s already here to succeed,” Schaffer said. The team is based adjacent to DSR and shares parts with that multi-championship squad. “I’m just bringing the knowledge I’ve gained over the last few years. I’m looking forward to working with Eric Lane to see if we can get this thing a little quicker and consistent and start winning some races.

“I’m looking forward to working with the Tasca family. I appreciate them giving me a chance and I’m excited for what the future will bring for Tasca Racing.”

About Anne Proffit 547 Articles
Anne Proffit traces her love of racing - in particular drag racing - to her childhood days in Philadelphia, where Atco Dragway, Englishtown and Maple Grove Raceway were destinations just made for her. As a diversion, she was the first editor of IMSA’s Arrow newsletter, and now writes about and photographs sports cars, Indy cars, Formula 1, MotoGP, NASCAR, Formula Drift, Red Bull Global Rallycross - in addition to her first love of NHRA drag racing. A specialty is a particular admiration for the people that build and tune drag racing engines.